Barclay: The tried and tested game plan we used to beat France and the man Scotland must target 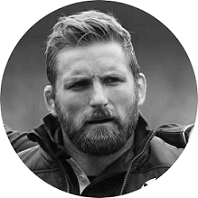 In my time with Scotland, I never felt that worried about playing France at BT Murrayfield. And when they beat us in Paris, I felt it was generally more reflective of how poorly we had played rather than French brilliance.

We knew they would bring passion and energy, especially at home, but only in fleeting bursts. Their fitness wasn’t anywhere near good enough to sustain that kind of fervour for a whole game.

In a domestic league noticeable for a slow, stop-start style, ball-in-play times are significantly lower than in other top competitions. Previous approaches would have seen Scotland attempt to push this ball-in-play time north of 40 minutes, draining French legs and creating indiscipline, inaccuracies and defensive lapses. In essence, trying to out French the French was the approach; fast and furious, loose rugby was the intended course of action.

But France are playing ferocious rugby for 80 minutes, so quite simply, their fitness must have shifted significantly to allow them to defend the way they are. Defensively, the easiest thing is to drop off your line speed, stop plugging holes, stop competing so hard at the breakdown – you might not miss the tackle, but you hang back when you’re not as fit. Their appetite to defend for 80 minutes, defend every phase, and put pressure on the breakdown, is remarkable to watch.

Reputations can take a lifetime to build, and often be shattered in a moment. A move to France may have prompted questions about the impact Shaun Edwards could have – would his renowned straight-talking approach sit well within the French culture? How would they receive him?

Edwards’ stock shows no sign of shattering, and if anything, looks set to go to the next level. Having played in Wales for five years, I can assure you there is no shortage of praise for his techniques and in particular, his energy and enthusiasm for defence. I’ve always believed that 95% of defence is about your individual mentality – your will to put your body on the line for your mates, your team culture and how much you want to buy into that relentless aspect of it. It’s often thankless. That willingness to constantly suffer, and defend even when it hurts, has been typified by the French spirit in their first three games.

I haven’t seen too many interviews in French with Shaun but clearly, there’s a massive language barrier between him – a fearsome bloke with an even fiercer Wigan accent and a very loose grasp of the lingo – and the squad, but he has been able to convey his message in emphatic fashion. It’s about enthusiasm, appetite, and he’s definitely got that across. North England and France should, on the face of it, not work. They’re like chalk and cheese. Yet initial impressions are that this appears to be a marriage made in heaven.

In the past, the French defensive attitude was, shall we say, less than stellar; very laissez-faire. Their kicking game was ad hoc and their exit and kicking strategies non-existent. That’s not the case anymore. Fabien Galthie and his support staff have given them cohesion, they look like a team that knows how they are trying to play; something that could not have been said of France in years gone by. They are not just playing off the cuff from every phase – there is structure without taking away from their traditional strengths.

France look confident, and a confident, settled and happy France team is a very dangerous beast. After their opening-round trouncing of England, they had a few days off and all came together to spend time with their families. During the World Cup, there was talk of player revolts and upset, and you know how emotional the French can be, but they seem to be so stable now, and we are seeing that in the way that they are playing.

France have a sensational crop of Junior World Championship winners and their attacking game has been devastating. They scored three tries against England, five against Italy and three more against Wales. They are the only team who can still complete a clean sweep, and you wouldn’t bet against them doing it. I can’t vouch too confidently for the French attitude and their feelings towards playing Scotland away. What I do know is the French record at BT Murrayfield is not fantastic – they last won there in 2014.

Scotland have to disrupt their 8-9-10 axis. In half-backs Antoine Dupont and Romain Ntamack you have two of the form players in the tournament. They look composed and natural and totally un-flustered, but no-one has really got a hold of them and rattled their cages to see if some of that stereotypical indiscipline may suddenly reappear. You want to try and bring that emotion out in the French, bring a bit of needle and rile them into becoming hot-headed and abandoning their structure.

I’d like to see Scotland play on the edge, bringing line speed with defenders making smart, aggressive decisions at the right times. The kicking battle will be crucial and Scotland must disrupt any flow France have generated over the last few games. Exerting massive kick pressure will be important, especially on Dupont. Scotland must squeeze him, make him uncomfortable, make every kick uncomfortable. Scotland’s physicality and intensity in their opening game against Ireland was something to behold and it goes without saying that more of the same will be required this Sunday. It’s a lot to get right, and it’s an immense test, but there’s no doubt in my mind Scotland are good enough to succeed where England, Italy and Wales have failed.

The fact that everyone, myself included, is heaping praise upon the French is no bad thing. Scotland will relish the underdog status and will fancy themselves, especially at home. After beating Italy and relieving some pressure, I expect to see a Scottish side throw off the shackles and unload. Sitting back will not suffice.

The battle of the back-rows will be titanic, and if the attrition on show between Wales and France was anything to go by, we are in for a treat. If Scotland win this game, it will rank as one of their finest wins in recent years and will set them up very nicely for a three-win Six Nations with two losing bonus points to boot. I think everyone would have taken that at the start of the tournament.

WATCH: Jim Hamilton looks back on what has been one of the most bizarre seasons in rugby history.

Barclay: The tried and tested game plan we used to beat France and the man Scotland must target

WR review tries at posts Next