Australia is facing a halves crisis following this year’s World Cup in Japan, with a raft of Wallaby halfbacks and first-fives set to ply their trade overseas next year.

According to a report from the Daily Telegraph, the three leading first-five candidates to travel to the World Cup – Bernard Foley, Quade Cooper and Christian Leali’ifano – will all be playing club rugby in Japan next year as part of a mass exodus from the southern hemisphere.

Leali’ifano announced his departure from the Brumbies earlier this week, as he will head to the Japanese Top League to play for the NTT Communications Shining Arcs.

Following that, the Telegraph has also revealed that Foley is in deep discussions with Top League side Kubota Spears, and is expected to announce a two-year deal – which will see him end his nine-year association with the Waratahs – shortly.

Cooper will also be heading to Japan next year, linking up with long-time halves partner Will Genia at the Kintetsu Liners for the next two seasons.

Genia, a 100-test veteran, isn’t the only experienced halfback set to leave Australia at the end of the year, with 71-test Waratahs halfback Nick Phipps set to join London Irish in the Premiership following the World Cup.

The loss of five key players will leave Australian Super Rugby clubs scrambling for suitable replacements, as Rebels playmaker Matt Toomua will be left as the only internationally capped first-five left in the country, although he spends a lot of time in the midfield at second-five.

The return of Nic White from Premiership club Exeter will aide the loss of Genia and Phipps, but the latter duo provide at least six more years’ of Wallabies experience than White, back-up Waratahs scrumhalf Jake Gordon, and Brumbies star Joe Powell.

Internationally, the Wallabies should be unaffected, as under the Giteau Law, the national side can still re-call Foley, Cooper, Genia and Phipps for tests as they have all surpassed the 60-test threshold and have played professionally in Australia for at least seven years.

However, it will be at Super Rugby level where Australian sides will begin to feel the pinch of the exodus north.

Rugby Australia has moved to sign the next generation of players – almost all of the Australian U20 side that has qualified for the World Rugby U20 Championship final have been signed to franchises next year – but the mass defection of players comes at an inconvenient time, according to the Telegraph.

Rugby Australia is attempting to secure its financial future as it negotiates a new broadcast deal which is set to come into play from 2021 onwards, but it’s doing so without the support of a number of its current star players.

Israel Folau, arguably the union’s premier talent, has been sacked for his controversial and vocal standpoint on homosexuality, while David Pocock and Samu Kerevi will join Foley, Cooper, Genia and Leali’ifano in the Top League next year.

Adding to Rugby Australia’s woes is that for the fourth season in a row, just one Australian Super Rugby franchise has managed to qualify for the competition’s post-season.

That is a particularly devastating blow this year, given that the Reds, Rebels, Brumbies and Waratahs were all in the running to make the top eight in the closing stages of the competition, but only the Brumbies were able to lock in a spot in the quarter-finals.

While the current competition structure – which guarantees at least one team from each conference will make the play-offs, regardless of their points total – is in place for 2020, the axing of the Sunwolves in 2021 means that Super Rugby will revert back to a 14-team, round-robin structure that was last used from between 2006 and 2010.

The change means that only six teams will make the play-offs, and with no conference system in place, there can be no guarantee of Australian sides competing in the post-season, especially with such a significant loss of talent at the end of this year.

The competition’s governing body, SANZAAR, are currently in negotiations with World Rugby regarding a potential global international league, dubbed the Nations Championship, to be held annually between test sides which would bring in millions of dollars of additional revenue for Rugby Australia.

Bolstering the coffers of Rugby Australia is vital to the sustainability of rugby within Australia, especially as they prepare to front a legal battle with Folau over his sacking.

The courtroom dispute has the potential to bankrupt the nation’s governing body, as reports suggest Folau could sue his former employers for up to $10 million in damages. 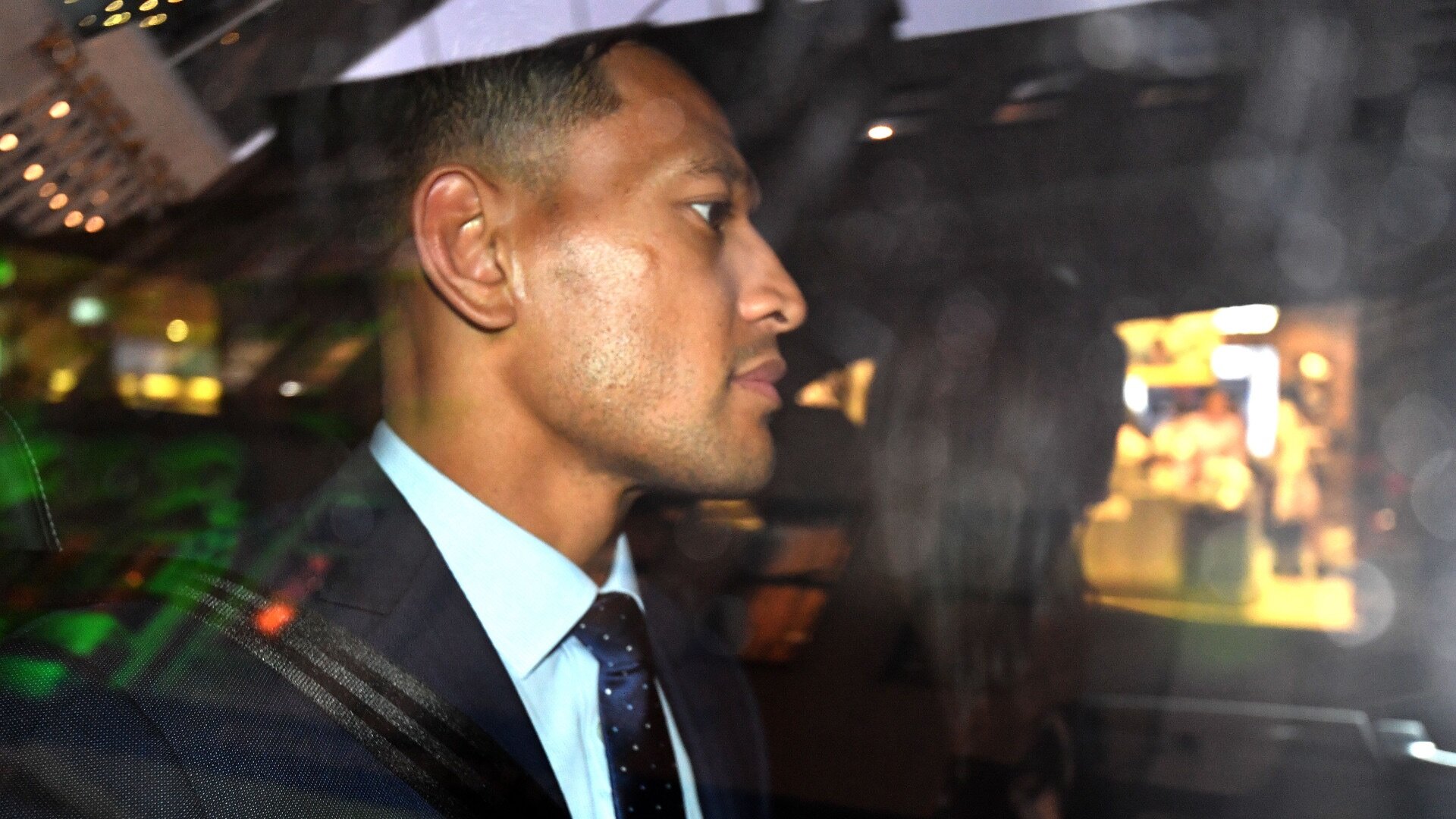 Israel Folau leaves his code of conduct hearing in Sydney on May 7. (Photo by Saeed Khan/AFP/Getty Images)

As it stands, the only resistance from bringing the Nations Championship to fruition is coming from some members of the Six Nations in Europe.

SANZAAR’s back-up option would be to continue with the Rugby Championship, but expand it to a six-team tournament, with the inclusions of Japan and the United States, the Telegraph report said.

However, it is believed that current Australian broadcaster, Fox Sports, is looking to cut expenditure on rugby from beyond the 2021 broadcast deal due to the sport’s floundering relevance within the Australian sporting landscape.

Consequently, the dismal success of the Wallabies and Australian Super Rugby franchises, combined with the possibility of the Nations Championship proposal falling through, as well as the Folau legal proceedings, could leave Rugby Australia in an extremely dire state.

Wallabies leaving Australia at the end of 2019: