Analysis: Why Clive Woodward's attacking plans from 2003 are vitally important to this new era of defensive dominance 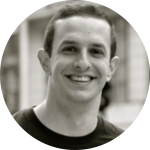 “All motion is cyclic. It circulates to the limits of its possibilities and then returns to its starting point.” – Robert Collier

When rugby went professional back in 1995, the stakes in the game were raised.

Money for the first time, was involved, leading to teams and coaches being placed under greater pressure to win. With this, came desire to improve, and to take inspiration and advancements from more evolved codes.

In conversation with Jean de Villiers

In conversation with Jean de Villiers

This was when rugby’s adoption of league tactics began. When Rod MacQueen and Graham Henry took over their respective Wallabies and All Blacks sides, the insertion of league shapes and lines became standard practice.

Rugby union defences weren’t ready for the advances in attacking play that league had developed, the results of which created the brilliant try-scoring sides that we knew they would become.

In their haste to keep up, many followed suit, gradually replacing what were considered outdated attack shapes. But then, the famous league rush defence became mainstream, and the ability to shut down league shapes became far more common.

“I think there’s a bias towards the defence, that’s definitely happened, and then because of that everyone thinks we are closer than we probably really are. But someone’s going to crack that defensive nut, because history tells us it will happen, and when it does, then it will open up the floodgates for the attacking game to come strong again. Then everyone will be saying there’s a bias towards attacking, and they’ll go away and work harder on what they’re going to do on defence.” – Steve Hansen, 2019

With league defence, the tries dried up, leading to the years of kick-tennis that we saw combined with the experimental law variations. The result is that modern defences are specifically designed to nullify these attacking shapes, as shown by South Africa shutting down Wales’ “slice” play below.

This play is the standard second-line release shape across all teams. Having two lines of attack (flat and deep) is the default attacking template in union and league defences are primed to rush up and cut off the second receiver and stifle the attack.

This league shape replaced a certain play that was widespread in union during the late 90’s-2000’s and was one of the base moves of the England attack under Clive Woodward.

England called this set of plays ‘World Class’. Along with ‘Missile Carry’, it was one of their go-to attacking plays and when performed accurately, was incredibly effective, be it off set-piece or phase play. They had three key variations within it. 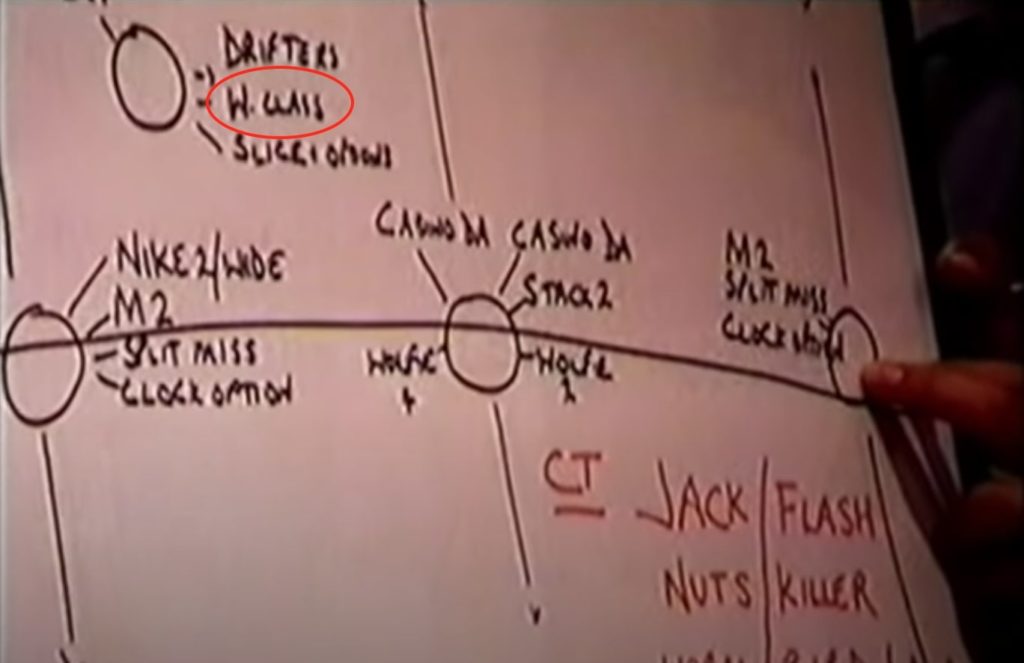 The Alpha option is when the short pass is given to the strike runner, which is Will Greenwood coming from deep in the below example.

It is the yin to the yang of the slice option.

The decoy runner (bravo) drifts out to lure the defence and draw attention away from the strike runner, whilst the strike runner (alpha) collects the ball from the distributor’s shoulder to hit the created open space.

In the slice, the decoy runner runs a much flatter ‘unders’ line, with the strike runner taking the pass behind in an ‘in-to-out’ line.

This is where the play gets a little bit more interesting.

Rather than the alpha receiving the pass, the M1 pass is given to the bravo option in Will Greenwood on the drifting line. The M1 pass is also run off the second receiver in this instance.

The length of pass and his crab allows Greenwood to target the outside shoulder of Welsh outside centre Mark Taylor, committing Taylor and releasing Mike Tindall right into the 13 channel.

The ‘charlie’ option was England’s use of the world-class ‘bravo’ option, to pass to an alpha runner from another world-class set.

All in all, it provided options to strike the 10/12/13 channel as well as the edges if they’re deemed exploitable, so changes could be called whilst on the move.

Why does this still have relevance?

This move provides a different picture to what league defences are now expecting, especially at the edges.

The modern defences of today are designed to shut down the second line of attack released by the slice option. These lines are practised constantly as standard structures in the game, and unfortunately, are often straight lines.

Very rarely do players change their angles midline nowadays, which is unfortunate as it is a hugely under-coached skill in the game.

With straight lines, even a ball-watching defender knows the attacker’s line, making the read easy without even watching the runner.

Below, we can see how the fade by Jacob Stockdale allows him to get outside George North.

This is all down to the change in Stockdale’s line and the pass from Conor Murray, which is designed to take this into account. They used this throughout the Six Nations and shows what the long pass and a change in running-line can do.

The ‘world class’ family of strike plays provides consistent changes in line and lateral movement, which adds a layer of trouble to the defence as their starting defensive positions will be nullified when the pass is made.

This means the defence can’t simply predict where the line will end.

The world class move could come back into play to move the ball wide off first phase.

Johan Cruyff said “speed is often confused with insight. When I start running earlier than the others, I appear faster”.

This is the basis behind the world class ‘bravo’ option, the lateral movement is chosen by the attacker himself, therefore he can choose to crab a short distance to draw defence wide to open up space for the alpha option, or crab a large distance as Greenwood showed, for the long pass to exploit the 13 channel.

Here, we can take a look at two wide moves run against the South African defence.

One ‘world class’ variation ran by Australia, and one “sweep” move by New Zealand.

The New Zealand sweep play is well-handled by the Springboks, and doesn’t succeed in creating an overlap on the edge.

When the last man, Reiko Ioane, receives the ball, he is covered by the last defender, fullback Willie le Roux.

The ‘world class’ variation by the Wallabies succeeded in getting the last man Reece Hodge unmarked, with fullback Warrick Gelant seen covering Dane Haylett-Petty one man in.

Unfortunately for the Wallabies, the last pass goes astray and the opportunity isn’t taken.

Whilst the South Africans are missing Cheslin Kolbe and Willie le Roux against Australia, there is a key difference not player related, which causes this overlap.

Against New Zealand, Jesse Kriel is able to get over to handle the decoy runner, clarifying Kolbe’s role as the ‘catch up’ defender. 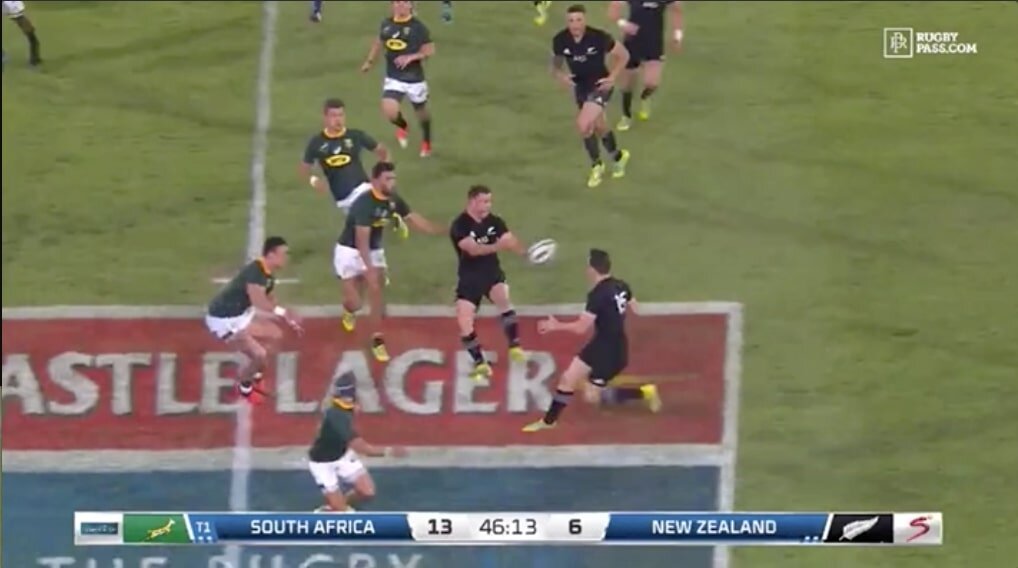 The miss pass to Crotty is on a straight line, meaning the proactive drift catches up, allowing Kriel to mark Ben Smith, freeing Kolbe (14) to fulfil his role as the catch-up defender (CUD).

This presents Kolbe with a familiar picture, and he is able to catch up, as is the South African standard operating procedure. 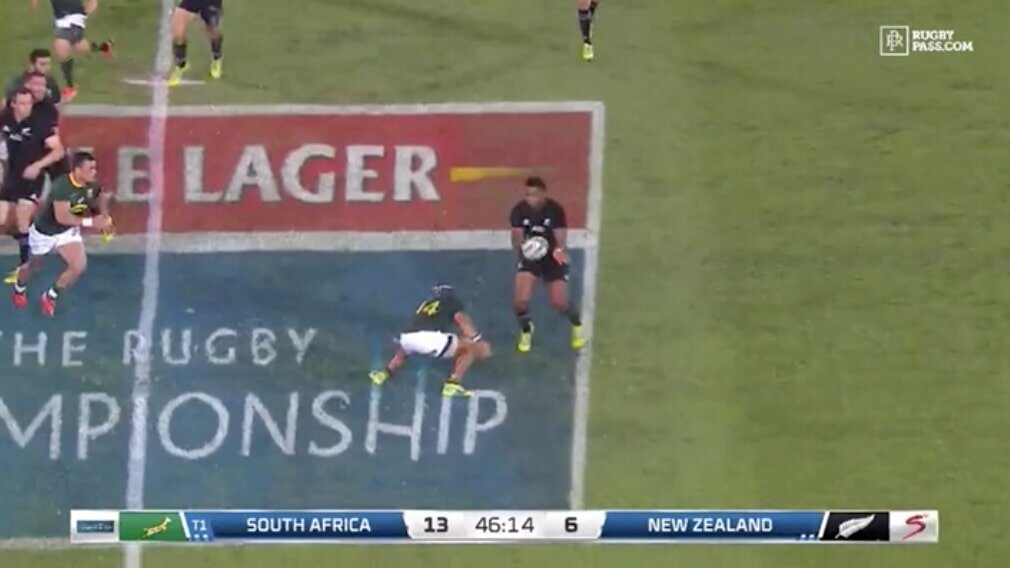 Most importantly, this means Le Roux is able to mark Ioane. 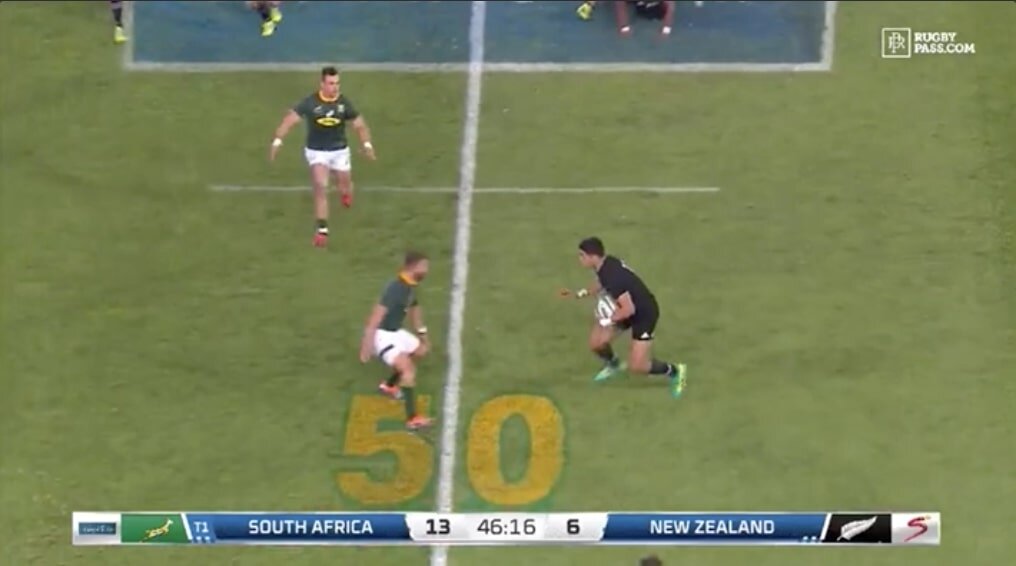 Against Australia, Matt Toomua as the second receiver is able to get to Kriel’s outside shoulder, meaning Sbu Nkosi has to mark Kurtley Beale, not filling his CUD role on the blind winger coming across, Dane Haylett-Petty.

The bravo line swerve means as the pass is received, the runner is crabbing.

This not only means he skips defenders in the line, but if he’s a speedster, this means he is likelier to target weak outside shoulders. 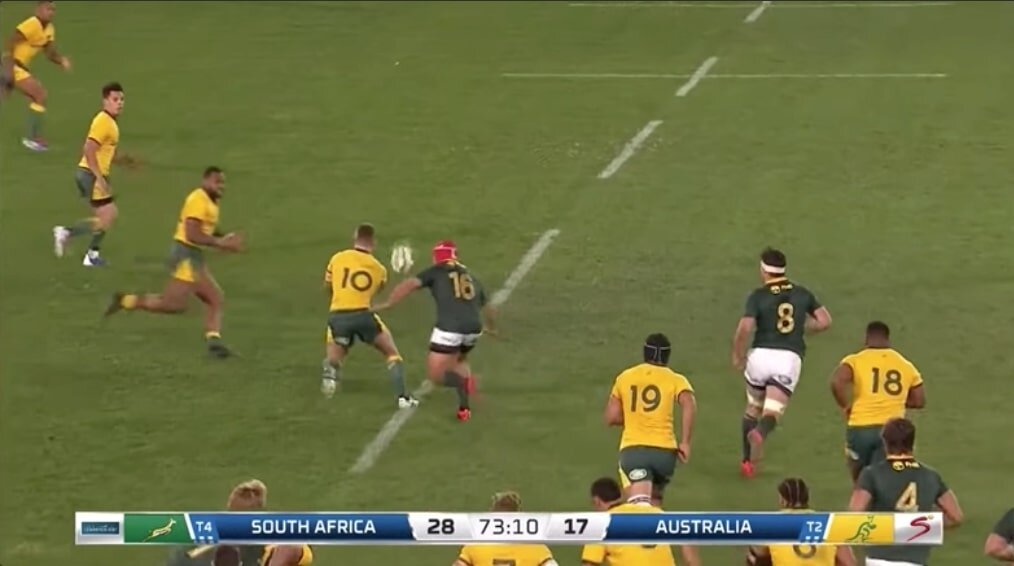 Toomua runs the bravo line, and runs onto the ball, with a flat pass from Bernard Foley. 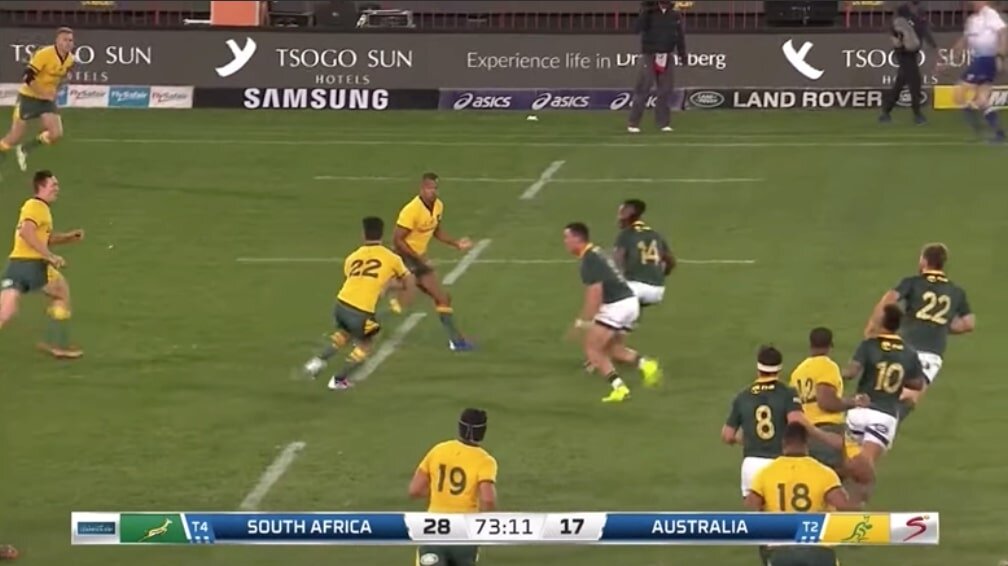 Toomua’s speed and flatness of pass means he can commit Kriel even on the drift, meaning Sbu Nkosi moves in to cover Beale’s line. 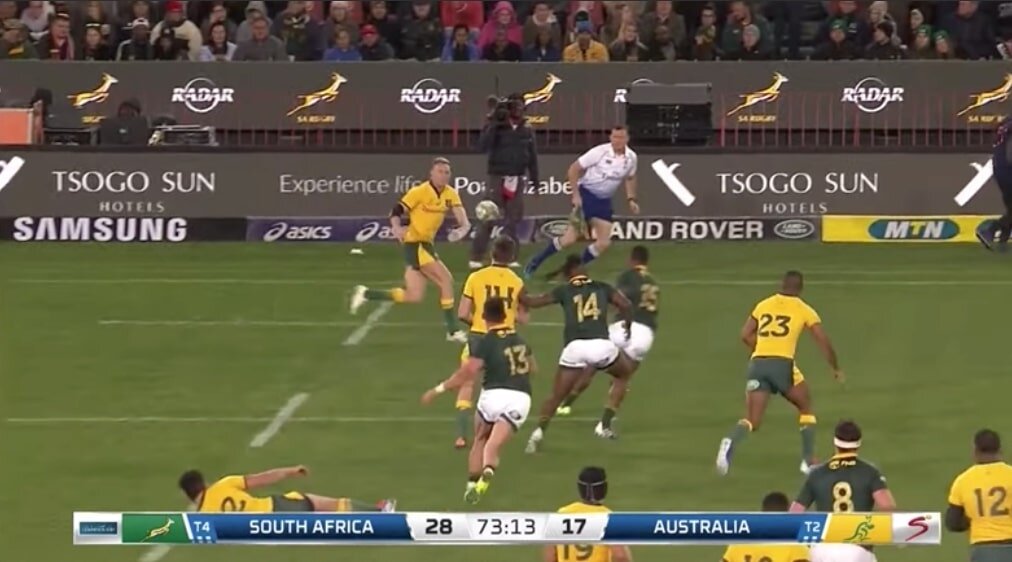 Due to Warrick Gelant’s natural depth coming up from the back three pendulum, he can’t shut down Dane Haylett-Petty in time, meaning Reece Hodge receives the pass unmarked.

The main benefits of this are found in depth and late decision making.

This shape has an advantage over the slice play due to the alignment that the ball can be caught at.

The slice shape demands a very steep pass. This is due to the decoy runner blocking the passing lane. 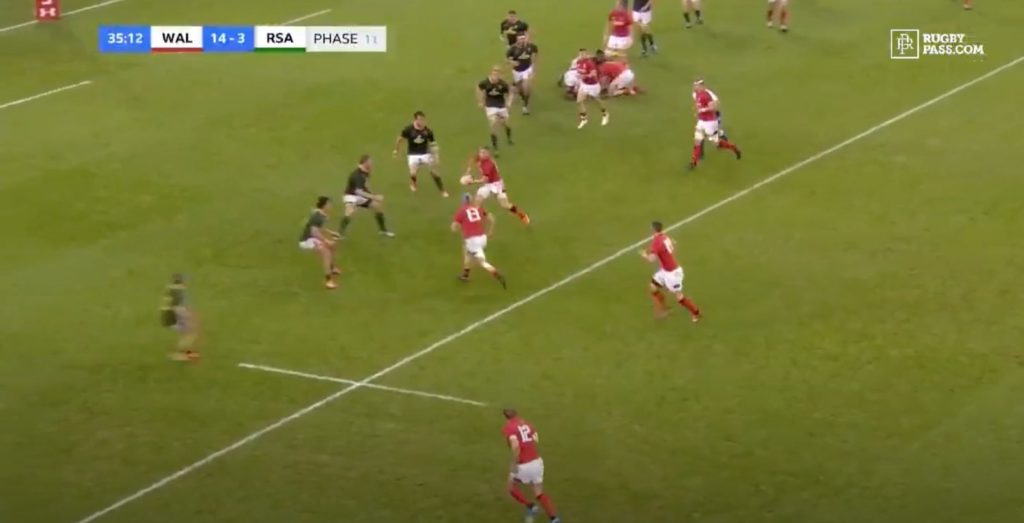 Jonathan Davies inadvertently blocks the flatter pass. As Davies starts his line in front of North, at no point can North receive the flat and wider pass.

The pass can never be as flat or as long as it can be with the world class, as that pass in the slice will be blocked by the decoy runner.

This is why the slice option has to stay deep to receive the pass.

This means the depth of the second receiver, and therefore the line, can be anywhere from five to fifteen metres. This not only buys time for the defence to cover that line off first phase, but activates the CUD, as we saw against New Zealand.

In contrast, world class always allows for the wide and flat miss pass, as the bravo option starts in front of the alpha. 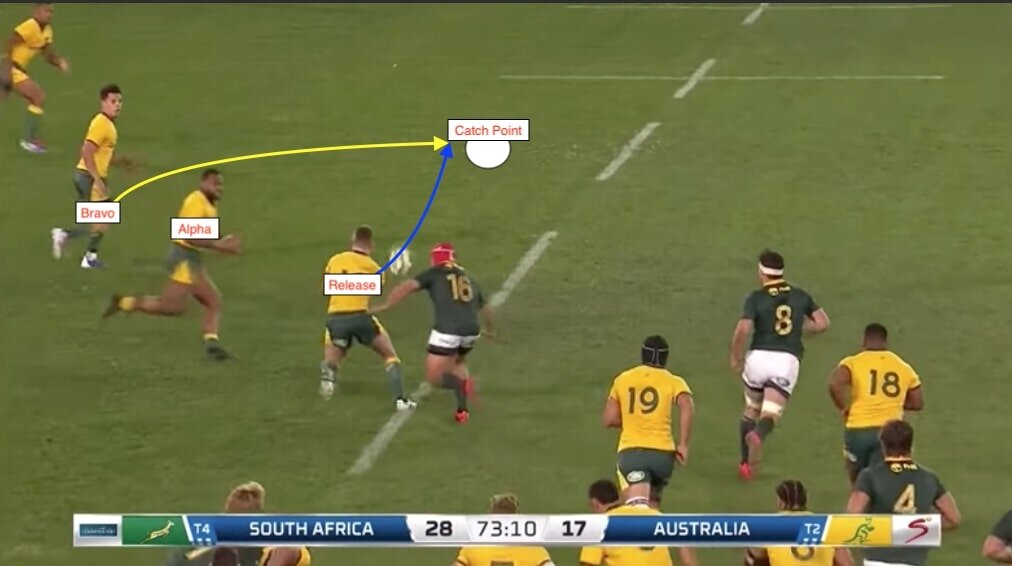 Here, we see Foley make the pass, and Toomua run onto it flat. This means he not only has skipped more defenders with his crab run, but the line off him is flatter, meaning the defence’s inside drift don’t have the time to cover them. 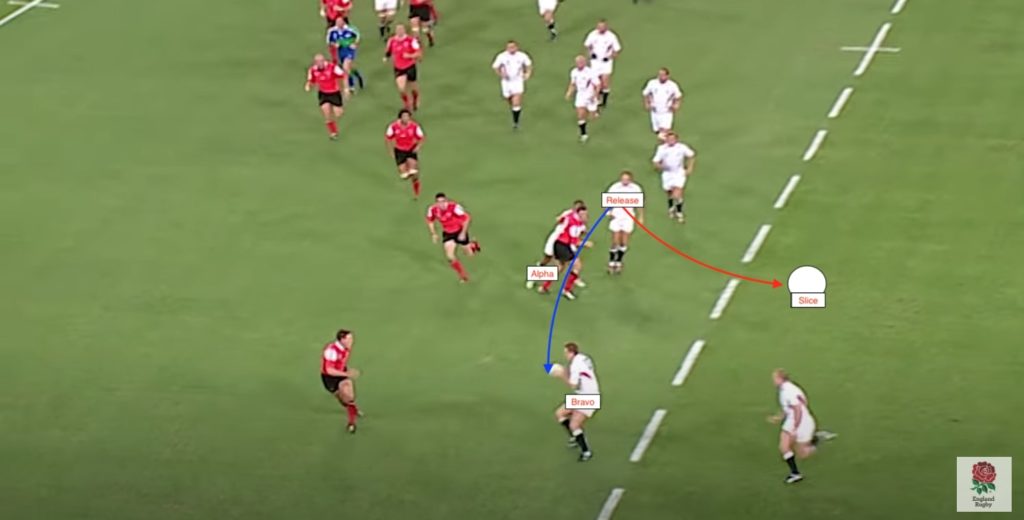 The same principle happens in 2003, Greenwood crabs out to commit the 13 then runs onto the ball flat, exactly like Toomua on Kriel.

The slice option would put the play deeper, providing more chance for the opposition to cover.

In terms of rush defences, they usually bide their time, coming up in stages. These stages are triggered by the use of a slice option.

This pass is easy to see and easy to predict. The second its released, the defence knows from its angle the target and there is only one option.

In world class, there’s not, as the pass goes in front of both alpha and bravo. Either are viable options, and that is the second key advantage of this. 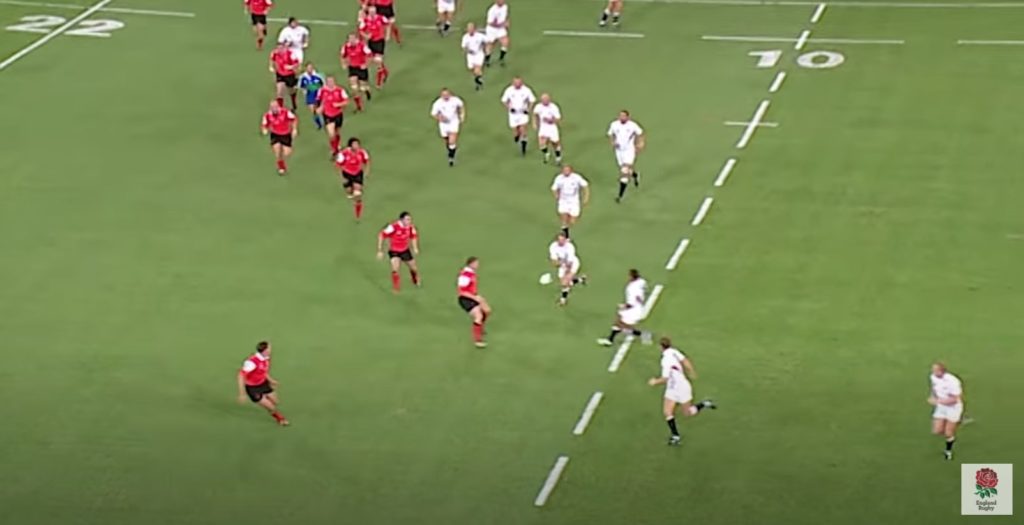 The defence won’t know which player the ball goes to when it’s released, whereas they instantly know with the slice.

On top of this, as the alpha option starts deep, he takes longer to come into play. This buys time for the bravo’s crab and holds the rush defence, as they don’t know the option until the ball has passed the alpha, and they can’t rush if the inside is being hit.

Combine this with its late decision making, and this will pose questions.

This shape is all about change in the predictability of attack. This has the potential to confuse the defence at the edges, as they’re used to the cues and safety of shutting down straight league lines, not the curved lines and variable crab length the bravo can run.

With the familiarity of league lines in attack, something else needs to be found. In the right circumstances, this may pose a solution.

Analysis: Why Clive Woodward's attacking plans from 2003 are vitally important to this new era of defensive dominance