Analysis: What makes the Springboks edge defence so hard to crack and the play that cost England in the final

During this uncertain and torrid time, boredom can often creep in. The mind can wander, and it’s not enough for us to keep physically fit, but to regularly stimulate and fire up our mental side as well, to prevent us from going mad in our wise, but incredibly tedious self-isolation.

When we think of rugby players and coaches, most of whom are embedded in the unrelenting routine of physical exercise and study, this can manifest itself in workaholics like Eddie Jones and Ian Foster being driven to new heights.

What is exciting is that this defence is innovative, and therefore as we will show, teams are going to have to come up with something outside of the box to beat it.

The Fist and catch-up

Whilst the details of the ‘fist’ defence has been described, we need to show what the Boks do that makes their defence so hard to beat.

This involves exploring the dynamics of their ‘catch-up’ and how their make-up allows them to consistently snuff out wide opportunities. 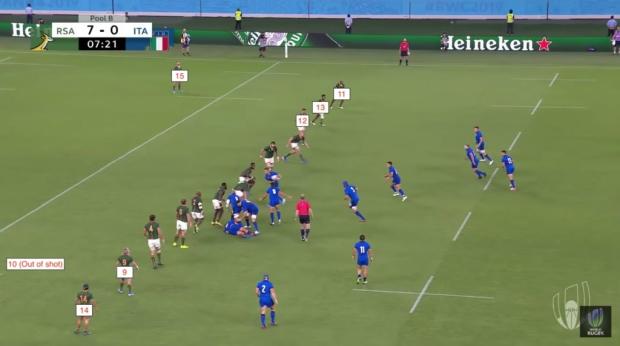 Like all astute defences, Jacques Nienaber has his tight five defending close to the ruck, his back row and jackals further out, and then on the edge, the backs in either a 2-3 split as seen above, or the 1-4 split as shown below. 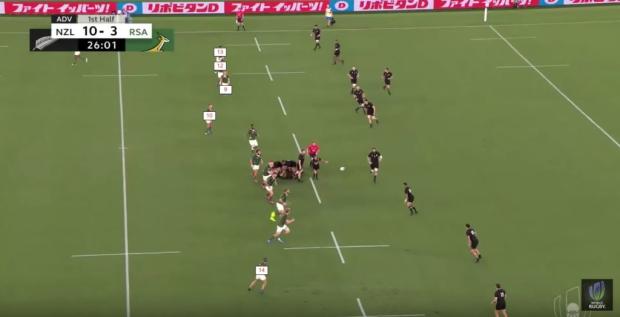 In terms of backfield defence, they fluctuate between a 13-2 and a 12.5-2.5, with Faf de Klerk playing the ‘adjusting defender’ role that we will discuss later. This defence is incredibly effective at stopping ‘modern pattern’, with decoy pods and deep play a necessity for it to work.

This defence is just very good at covering all the likely options that structure is designed to present, with even grubber kicks accounted for. Not to mention the players South Africa have are perfectly suited for this sort of defence.

The ‘catch-up’ portion is the dynamic the backs execute when the overlap is on.

The Bok defence on the edges is very unique. It is so successful, because it has so many accurate decision-makers within it, with de Klerk, Damian de Allende, Cheslin Kolbe and Jesse Kriel being instrumental in its efficiency.

It is a very strong ‘out-to-in’ rush, with the two edges – be it their ‘two’, ‘three’ or even ‘four’ – set starting wide and moving in in a rampant rush to push the attack back inside towards their jackals.

This doesn’t account for the backfield defender, who also comes up in standard pendulum formation.

This means the angle of the hit allows the Boks a greater chance of making the tackle and gaining dominance in the hit, as they’re not meeting it head-on, but re-diverting.

The second receiver assignment is the do-or-die tackle for the Boks, as executed by Jesse Kriel below.

The second receiver is a playmaking back who takes the pass behind a decoy forward pod, providing the link for the dangerous outside backs.

By cutting him off, the danger is nullified.

In each of these examples, we see the defenders in the catch up close down the second receiver, snuffing out the wide opportunities.

These defenders are often the last two in the defensive line. This is where the magnificent decision-making comes in to make it all work.

If the decoy by the attack is run wide enough, the second man in will have to bite, leaving the second receiver for the winger, Cheslin Kolbe, below.

As we can see here, the second man in leads up (Handre Pollard), but the man outside him (Cheslin Kolbe) stays in line with him, only moving past when the next pass is given. 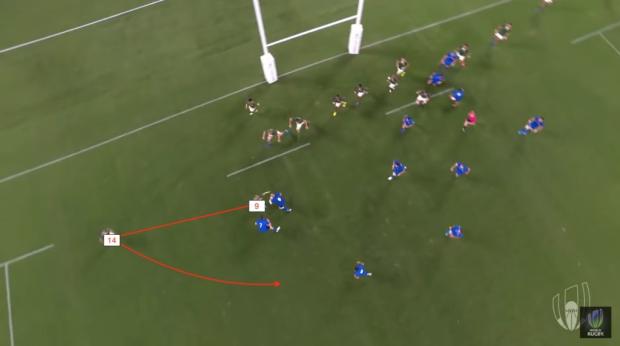 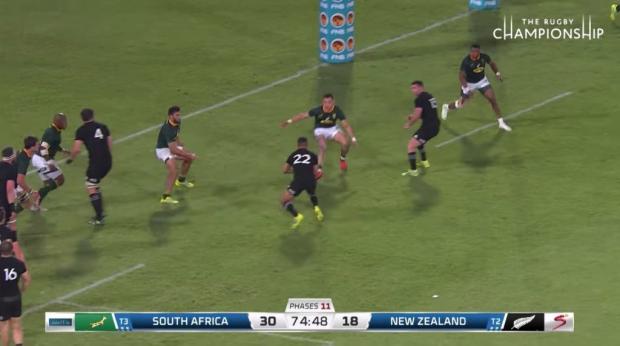 Against Australia, this was shown to great effect.

They come up as a line, each player is coming on their out-to-in line and moving past the inside defender as the pass is delivered. This means each receiver fields the pass under intense pressure.

If the rush also involves the loose forwards, that means the third and even fourth receiver can come under pressure as he takes the ball, as there are more defenders to come in and pressure the pass.

The adjusting defender is a very unique concept that was responsible for holding England out in the final, and is often given to halfback Faf de Klerk.

At the start, we stated that South Africa half switch between a 13/2 and a 12.5:2.5 in terms of backfield defence.

It is the principle by which the Boks reload an undermanned edge when the opposition has the overlap on the far side.

As we know, many teams are engrained in structure. An overlap might be on, but the ‘three-pod’ off No. 9 is too well-drilled, and a team will carry instead of going wide to the space.

Here we see Jesse Kriel push Handre Pollard to move out to the opposite edge as Wales have numbers going back left.

The Welsh pod carries, buying time for this reload to complete before the ball gets wide.

Against Scotland, we see Kriel fulfil the role of the ADJ.

This overlap is down to an error on South Africa’s part.

After first phase ball, the Boks are supposed to reload their edges in a split decided by the defensive captains.

On this occasion they did not, meaning Pollard should have been on the far edge. Kriel moves over to fill the gap and join the catch-up portion.

However, he doesn’t get there in time, this means the catch-up can’t snuff out the second-third receiver link and the ball gets out wide, eventually leading to the try.

It was the result of a system error, but Scotland went wide immediately, at a good depth of alignment to get around the midfield rush in particular.

This gave them the time and allowed space that nowadays, the Springboks are too well-drilled to give them.

De Klerk saved South Africa on multiple occasions during this game, and his responsibilities and freedom as the ADJ meant he could make act as he saw fit – and he did.

He saved a few chances, and a try that could have swung momentum in England’s favour.

We see de Klerk here acting as the sweeper for the kick through. England’s prevalence to target the blindside meant this was a very real danger, and his placement here allowed this option to be covered. He starts here, before England prepare to work the numbers.

The problem is that England’s alignment off No. 10 is not what it needs to be to exploit this and, more importantly, the first phase play off No. 9 is very well telegraphed, meaning de Klerk gets one hell of a head start to circle round to the opposite side. The ball is passed to Ford who is put under severe pressure.

He chooses the right option and passes deep to Elliot Daly, who is in the best position to unlock the wingers in Jonny May and Anthony Watson. A floated pass to Watson on a much flatter alignment and greater width would have put him in, but these would require difficult skill sets that are hard to execute under normal circumstances, let alone a final.

The pass is too lofted, allowing the defence to close in on Watson and force England to register a big net loss. It was a pivotal moment to prevent England from scoring a try and eventually settle for three.

However, there are ways an attack can break down this defence which will be covered in part two. To beat this regularly, there will need to be a huge focus on unusual skill sets and innovation, as well as changing the structure of an attack quite significantly.

But it is possible, and with what it’s going to take, will be very exciting for the game.