Analysis: How the Hurricanes became roadkill at the hands of the Crusaders' 'Rolls Royce' pack

The Crusaders 32-8 win over the Hurricanes, the first at the Caketin in seven years, was a demonstration in hard-nosed rugby built on the back of defence. With just 38% possession, they punished the Hurricanes mistakes with three tries coming off the back of errors and foiled their attack all night.

The Hurricanes are a carry-first, power running team with a developing young pack built around getting strong carries from ‘punch runners’ like Ngani Laumape and Ben Lam. However, whenever the Hurricanes threw a punch, the Crusaders grabbed the fist and held it for as long possible, leaving them flummoxed.

When you slow down the roll, everything becomes substandard and the lack of accuracy in other areas for the Hurricanes really comes to the surface.

Bad intentions at the breakdown

The Crusaders manipulated the breakdown, creating a mess of the tackle area. The young Hurricanes pack could not clean the ruck efficiently often enough, as tacklers failed to roll away and the Crusaders used questionable contests to slow the ball. On this occasion, the Hurricanes pair of young locks take poor angles in the cleanout of Sam Whitelock, with James Blackwell (4) certainly taking an illegal entry after overshooting the mark. Whitelock falls forward, on top of the tackler, obstructing Perenara’s platform to pass. Blackwell ends up facing the wrong way, and could well be in a position to compete for the ball if he was wearing a Crusaders jersey.

Although they did what they had to in order to move Whitelock off the ball and fortunately escaped being penalised, the presentation for TJ Perenara is a mess.

A lack of accuracy around the breakdown by the Hurricanes hurt, but despite this, the Crusaders forwards continued to push the boundaries, which lead to compounding problems for the Hurricanes. 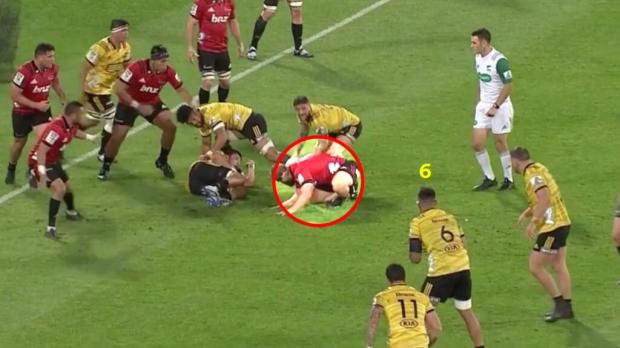 Crusaders prop Harrison Allan makes no effort to roll away from the back of the ruck forcing Perenara to throw a slow, loopy pass over the top of him to Vaea Fifita (6). With a ‘lollipop’ pass floating in the air, Whetu Douglas (6) has ample time to rush out of the line and put a great spot tackle on Fifita well behind the gain line.

Fraser Armstrong (1) tries to pull Fifita forward from in front of him and could well be called for obstruction should Whitelock attempt to join the tackle.

The Crusaders flood this back-peddling situation and Whitelock aims for Armstrong, knocking him over, to create a mess with bodies all over the floor. Codie Taylor (2) is over the ball at the back of the ruck, with Perenara no chance of recycling. Ben Lam (11) has to enter from the side, illegally, to try and take Taylor off the ball. 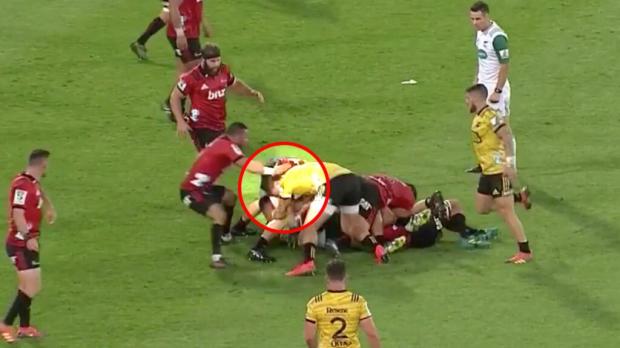 The Hurricanes are awarded a penalty, but many could have gone the other way and this is the point – the breakdown became such a dumpster fire that many infringements were left uncalled but having it become a mess only suited the Crusaders.

The pressure on this occasion was originally ‘enabled’ from a seemingly innocuous Crusaders player laying in an offside position obstructing the pass, but this wasn’t the reason the penalty was awarded. The Crusaders were able to do these little things without being called up all night.

The Crusaders pushed the boundaries of ‘legal’ contests with players coming off their feet to deliberately slow the ball. Taufua (20) manages to stay involved with just one leg on the turf, questionably supporting his own body weight as he is pulled to one side. He is able to spend 3-4 seconds over this ball, allowing the team to reset the goal line defence. Quintin Strange (19) is either a master of levitation or guilty of flopping straight over the tackled player. Either way, being off his feet over the ball should be called straight away.

As the first man arriving after the chop tackle by Quintin Strange, Codie Taylor (2) has every right to compete. What he does do instead, is dive over and seal off the ball with no support for his own body weight. The knees in the back of the Hurricanes player, the tiptoes on the grass, and his own forehead in the turf should be the giveaway. In a number of these cases, the Crusaders player will be called to release the ball and will oblige, but only after slowing the ball down in the first place.

How many times can you contest illegally before it becomes an issue? To say Ben O’Keeffe was ‘extremely lenient’ is an understatement, and the Crusaders played this all night.

The lenient referring played into the Crusaders hands, but the Hurricanes aren’t blameless. As illustrated in the first example with James Blackwell, the cleanout work was extremely inaccurate, with poor timing on support lines compromising the ability to neutralise the threat offered by Crusaders piling in at the ruck.

The Hurricanes own poor ruck work contributed against them, in some cases diving on players that have to roll away, allowing them to stay where they are, seemingly ‘pinned’ down by the opposition. The Crusaders added to the confusion of the tackle area by using deliberate tactics to create ‘grey’ interpretation areas for the ref.

With set-piece carries for Lam and Laumape, the Crusaders swarmed the runner with numbers and absorbed them, happy to concede a little ground as long as the runner found themselves wrapped up like a boa constrictor. Keeping the man up off the ground in an attempt to create a maul works to create turnovers but also even a slight delay often ends up in a mess on the floor with bodies from both sides all over the ball.

The Hurricanes supporting players often joined on in an attempt to wrestle the extra tacklers off but ended up contributing to slow service when it collapsed. Kieran Read (8) and Matt Todd (7) swallow up Laumape, with all three players eventually falling to the ground. James Blackwell (4) can’t get low enough to clean effectively and the ref has to decide whether the player was up long enough to be considered a maul, adding delay to the Hurricanes recycle. Whetu Douglas (6) has the strength to handle Laumape all on his own, and look what happens when is able to prevent him from getting to the ground. 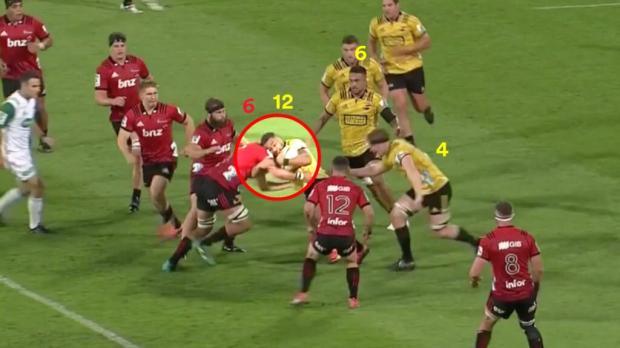 Vaea Fifita (6) and Blackwell (4) are the supporting runners on this occasion, but not having anticipated Laumape going backwards, whiff on their jobs as cleaners. Blackwell overshoots and ends up in contact with Ryan Crotty, while Fifita collides with Laumape as Douglas holds him up like a ragdoll. Even Ryan Crotty (12) and Richie Mo’unga (10) were able to absorb Laumape’s punching runs and keep him off the ground.

When the Hurricanes forwards join the party this is only going to end one way once the pile falls over, resulting in a turnover to the Crusaders. 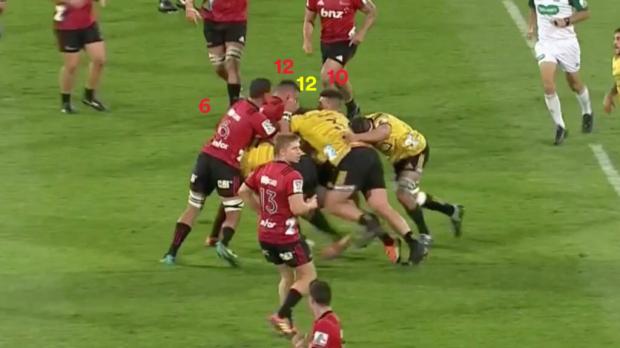 The Crusaders took away the power running and quick ball generation and left the Hurricanes wearing no clothes.

They do not have enough accuracy in the passing game or the ability to run well-timed running lines to create space through a scheme, either from set-piece or phase play. Anytime they did try to run wide plays with intricate moving parts, often the passing, depth or timing let them down and the Crusaders, left uncommitted, could tirelessly drift and close it all down.

They are a carry-clean team that relies on power athletes and tempo to make breaks, and once that one dimension was shut down, it was all over. They could not open up the Crusaders defensive line in the second half, and as they had to chase the game, the errors flowed.

This isn’t to say the Hurricanes are a poor team, just that the Crusaders are built to handle this style of rugby without much fuss. It was an off-night for the Hurricanes that got worse as the ruck contest went unmanaged. The passing of halves Beauden Barrett and TJ Perenara has been put under the spotlight in the post-mortem, but this has by and large always been what they offer in that area of the game.

Only when everything else that works for them is taken away does the deficiency become clearly visible to everyone. And that’s what the Crusaders did, by forcing the Hurricanes to try and beat them in a way they cannot.