END_OF_DOCUMENT_TOKEN_TO_BE_REPLACED

Harlequins returned to winning ways to reclaim third place in the Gallagher Premiership table with Alex Dombrandt influential in a 37-19 victory over Northampton.

Quins’ four-match winning streak ended with a narrow defeat at Newcastle last weekend but the rampaging Dombrandt was among the standout performers as Saints fell at Twickenham Stoop.

Alongside Exeter’s Sam Simmonds, Dombrandt has been repeatedly overlooked by England head coach Eddie Jones despite stringing together a series of powerful performances at number eight.

Tyrone Greene, Stephan Lewies and Mike Brown crossed for tries to help build a 27-12 interval lead and while the second half was controlled by Northampton, their execution in the final third was dismal.

Quins were down to 13 players in the closing stages after Dombrandt and Jack Kenningham had been sent to the sin-bin when the lead was 30-19, but error-prone Saints could not exploit the extra space and they even coughed up the bonus point to Brett Herron with 20 seconds left.

A lively opening 10 minutes fought out by two of the Premiership’s form teams produced tries at both ends.

Northampton were the first to strike with a clinically executed line-out move that saw centre Fraser Dingwall take the ball from Sam Matavesi and supply the scoring pass to Tom Collins.

But pressure by Andre Esterhuizen on Rory Hutchinson forced a mistake and Quins pounced on the error with Danny Care grubber kicking ahead for Green to score. 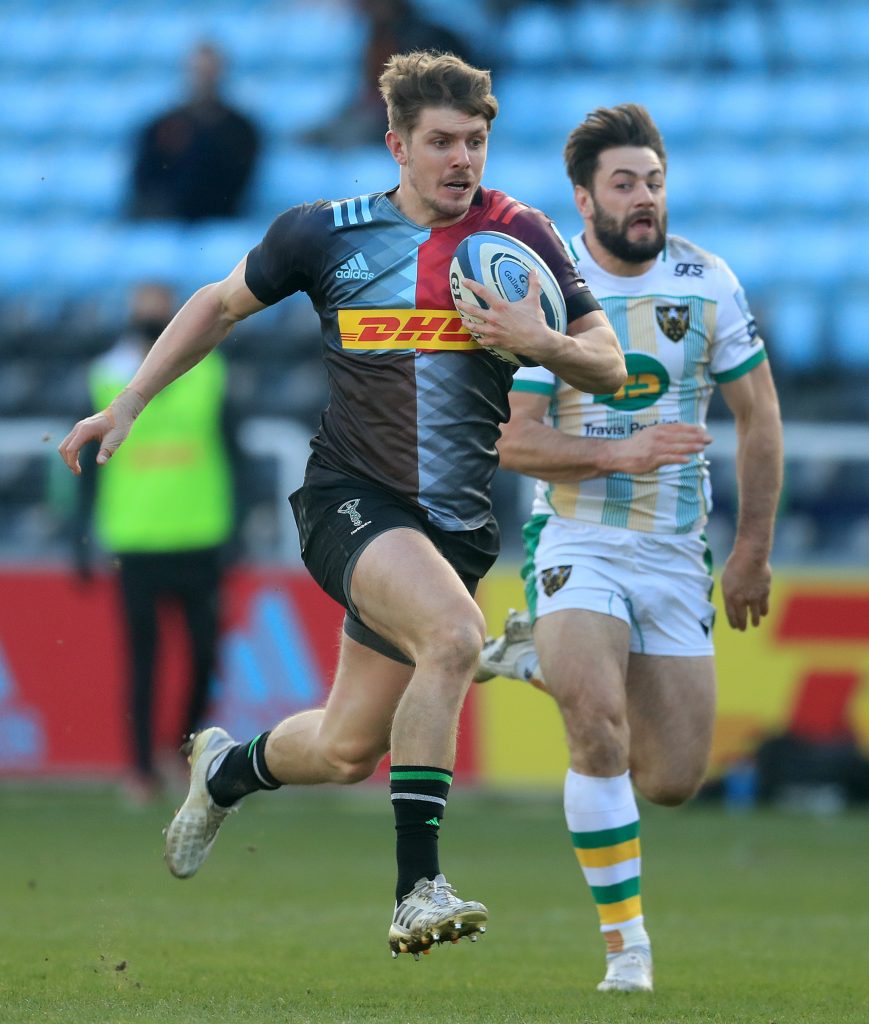 And the high-octane pace continued as captain Lewies reached out to touch down as the home side pressed once again, Care brilliantly orchestrating play at scrum-half as a 17-5 lead was opened up.

But Saints hit back with a jinking Hutchinson capitalising on a hole in midfield opened up by George Furbank’s well-timed pass to send Tom James over.

Following James’ try, Quins camped themselves in enemy territory and at times were guilty of forcing play as they closed down on the whitewash on two separate occasions. 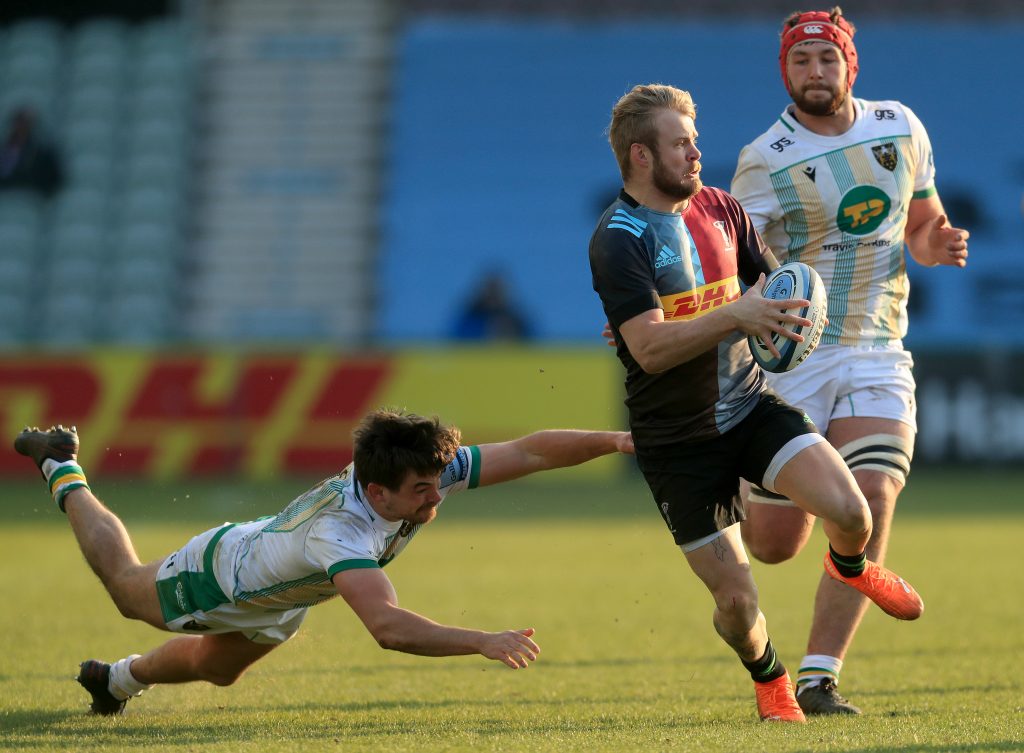 But they would be denied just after the half-hour mark when a big carry by Dombrandt from the base of a scrum began a series of thrusts that ended when Brown raced onto the ball and over the line.

Saints were fired up for the second half as they relentlessly battered away at the home whitewash, but they were almost undone when they were stripped of the ball by the outstanding Dombrandt.

The turnover launched a dashing counter-attack that eventually broke down through Green’s ill-advised pass, and from there Northampton struck as Ollie Sleightholme grabbed the ball, chipped ahead and scored. 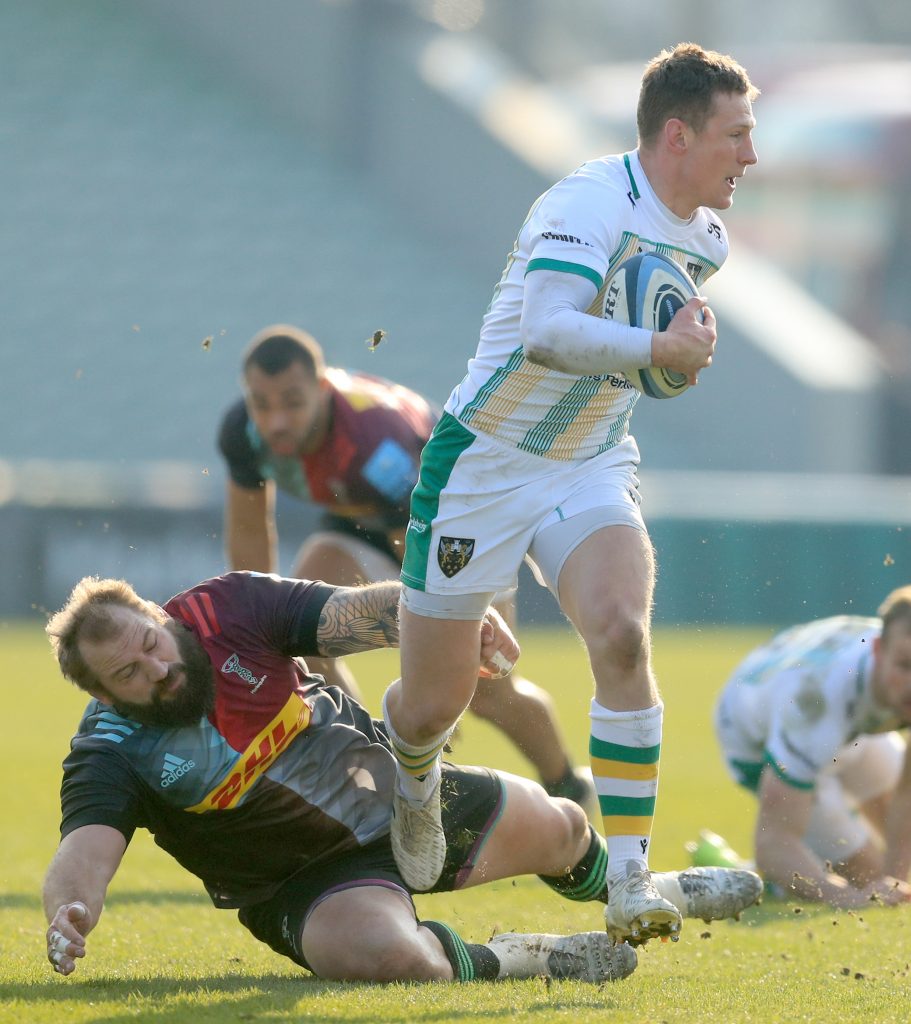 A third penalty by Smith meant Quins were still well in front and the 22-year-old fly-half appeared to have scored a breakaway try but a forward pass was spotted by the TMO.

Play was held up for several minutes as wing Aaron Morris received treatment before being carried from the pitch on a stretcher after his head caught Hutchinson’s hip during a tackle.

With Kenningham and Dombrandt shown yellow cards, Quins were up against it but they were helped by Harry Mallinder failing to find touch with a penalty and Taqele Naiyaravoro knocking on.

They held out and when the sin-binned duo returned, they claimed the bonus point when Herron crossed in an audacious move.