Rugby union turned professional on August 26 1995, a landmark moment for the sport which came a couple of months after reigning champions South Africa clinched World Cup glory on home soil. Here, the PA news agency looks at some of the sport’s highs and lows during the past 25 years.

High – A new era begins. The International Rugby Board declares the sport an “open game”, lifting restrictions on payments to those connected to rugby union.

High – With professionalism comes the introduction of European club rugby. The inaugural Heineken Cup is made up of twelve sides from France, Ireland, Wales, Italy and Romania and starts on the final day of October 1995. English and Scottish teams join the following season.

Low – England are kicked out of the 1997 Five Nations after selling TV rights for the tournament to BSkyB for £87.5million. A ‘Four Nations’ competition is initially formed before England are later reinstated.

High – The British and Irish Lions become only the third touring side to win a Test series in South Africa. With the scores tied at 15-15 in Durban in June 1997, Jeremy Guscott nervelessly slots a decisive drop goal to give the Lions an unassailable 2-0 lead.

It's hard to believe it's a quarter of a century on Wednesday that the late Vernon Pugh declared rugby an “open” sporthttps://t.co/5aJaCXHq8C

High – In 1998, the Women’s World Cup is officially sanctioned for the first time by the International Rugby Board. The tournament in Amsterdam follows unofficial competitions in 1991 and 1994.

High – Hailed by some as rugby’s greatest game, a record crowd of 109,874 are in attendance in Sydney for New Zealand’s remarkable 39-35 win over rivals Australia. Each side runs in five tries, with the Wallabies managing to be level at half-time after trailing 24-0 inside ten minutes.

Low – South Africa’s sports minister Ngconde Balfour calls for urgent talks with rugby chiefs after reports of unorthodox Word Cup preparations in 2003. Springboks players later speak of climbing nude through tunnels dug by foxes, having cold water poured over their heads, and killing chickens with their bare hands during the military-style boot camp.

High – England secure a new generation of fans back home by becoming world champions in 2003 thanks to Jonny Wilkinson’s dramatic extra-time drop goal against Australia in Sydney. England remain the only northern hemisphere side to have won the competition.

Low – The 2005 Lions tour lasts just 45 seconds for captain Brian O’Driscoll. The Irishman is left writhing in agony with a dislocated shoulder after New Zealand pair Tana Umaga and Keven Mealamu execute a controversial spear tackle. They escaped punishment for an incident which continues to be debated.

Low – Toulouse and Ireland forward Trevor Brennan receives a lifetime ban, which is reduced to five years on appeal, after jumping into the crowd and punching an Ulster fan at a Heineken Cup match in January 2007.

Low – Harlequins escape a ban from the Heineken Cup after being embroiled in a 2009 scandal dubbed ‘Bloodgate’. Tom Williams uses a fake blood capsule during the quarter-final loss to Leinster, which allowed the already-substituted Nick Evans to return as a blood replacement. 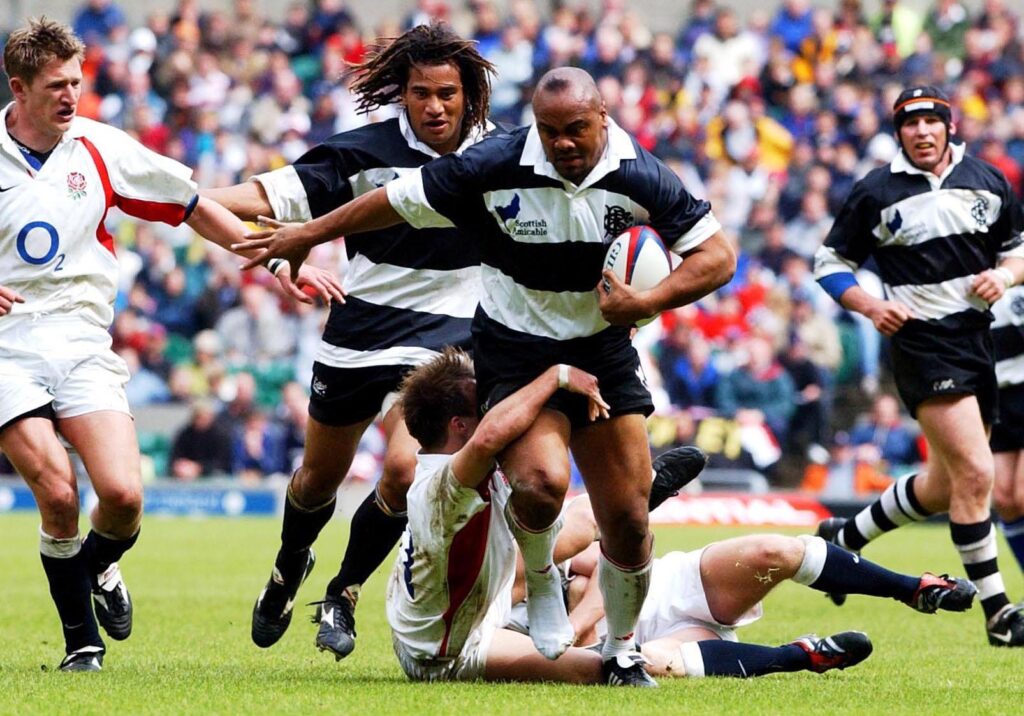 Low – Days after England are knocked out of the 2011 World Cup by France, centre Manu Tuilagi is warned by police and fined £3,000 by rugby officials after jumping from a ferry in Auckland.

High – Japan, who would go on to reach the 2019 World Cup quarter-finals as hosts, announce their arrival on the international stage in 2015 with probably the biggest upset in rugby union history. Dubbed the ‘Miracle of Brighton’, Eddie Jones’ Brave Blossoms shock South Africa 34-32 thanks to a late Karne Hesketh try.

Low – England are embarrassed on home soil at the 2015 World Cup, becoming the first host nation to be eliminated from the competition at the end of the group stage following Twickenham defeats to Wales and Australia.

Low – Jonah Lomu, arguably the sport’s first true global superstar, dies at the age of just 40 in November 2015. The New Zealander – pictured above in action for the Barbarians – suffered an unexpected heart attack linked to previous kidney problems.

High – Rugby Sevens appears in a summer Olympics for the first time as the men’s and women’s events get underway at the Rio Games in 2016. Fiji win gold in the men’s event, with Australia successful in the women’s.

High – The 2019 World Cup in Japan, won by South Africa, becomes the most-watched rugby event in history. More than 857million people around the world tune in, an increase of 26 per cent from the previous tournament in England.

Low – In January 2020, reigning Premiership champions Saracens are condemned to relegation to the Championship after breaching salary cap rules during the 2016/17, 2017/18 and 2018/19 seasons.

Low – Rugby union in England is suspended in March 2020 due to the coronavirus crisis, with the Six Nations and other tournaments across the world already halted. The pandemic casts uncertainty on the future of the game.

'It did turn sour'

Ed Griffiths' behind the scenes insight into the Springboks 1995 #RWC win ??, the back story to the Mandela moment, confronting flag-waving fans, holding clothes hangers for luck & the lost opportunity of it all