'You wanted to make the Aviva its own kind of futuristic fortress, a place to feel proud in'

Three Scottish players in self-isolation Next
Back
Internationals

'You wanted to make the Aviva its own kind of futuristic fortress, a place to feel proud in'

There has been any number of memorable battles between Leinster and Munster down the years. The Magners League meeting on October 2, 2010, was not one of them. Under a grey Dublin sky Leinster ended Munster’s unbeaten start to the season with their fifth win on the bounce against their old rivals thanks to a late Brian O’Driscoll try.

Not a classic by any stretch, but it was a landmark occasion for Irish rugby, being the first senior game held at the IRFU’s sparkling new home.

The Aviva Stadium, a joint venture between the IRFU and their soccer counterparts the FAI, was a signal of intent from Irish sport. Soaring towards the sky in a largely residential part of the city, the stadium instantly became a modern Dublin landmark. Its predecessor, Lansdowne Road, had long passed its sell by date by the time the bulldozers arrived in 2007. The Aviva Stadium finally brought Irish rugby into the 21st century.

Former Ireland Number 8 Jamie Heaslip still has a piece of the old Landsdowne Road sod holding pride of place in his home office. He can see the glass exterior of the new stadium shimmering in the sunshine from his bedroom window.

“When you saw the (new) stadium you were like, ‘Woah, what is this thing?’ It literally looks like a spaceship,” Heaslip remembers.

“Not that you felt you were in Blade Runner, but you felt like you were at the cutting edge of something. Something that in a really weird way was quite futuristic and ambitious, and all these great lofty things.”

Heaslip’s links to both the old and new Lansdowne Road are cemented by personal milestones. Having been snuck into the East Stand on family days out as a child, he went on to win his first international cap in the last Ireland game played at the old stadium, a 61-17 trouncing of the Pacific Islands in November 2006. A month later he scored the last try at the famous old ground, dotting down in the 77th minute of a 20-12 Celtic League defeat of Ulster.

Ten years ago to the day, he led out Leinster as captain for the first senior game played at the Aviva.

“You had this double-edged sword, because you had this really cool place, but you wanted to make it its own kind of futuristic fortress, a place to feel proud in and a place that makes memories for people on the field or watching on. It was aspirational, and I had expectations of what the place deserved.”

Former Ireland tighthead Mike Ross was also in the Leinster team that day. His memories of the old Lansdowne date back to a handful of trips up from Cork as a spectator, before eventually getting out on the grass during his playing days in the All-Ireland League.

If the Aviva Stadium was Blade Runner, by that stage the old Landsdowne Road would have been more at home on the set of the Flintstones.

“It was kind of a cool old stadium,” Ross recalls. 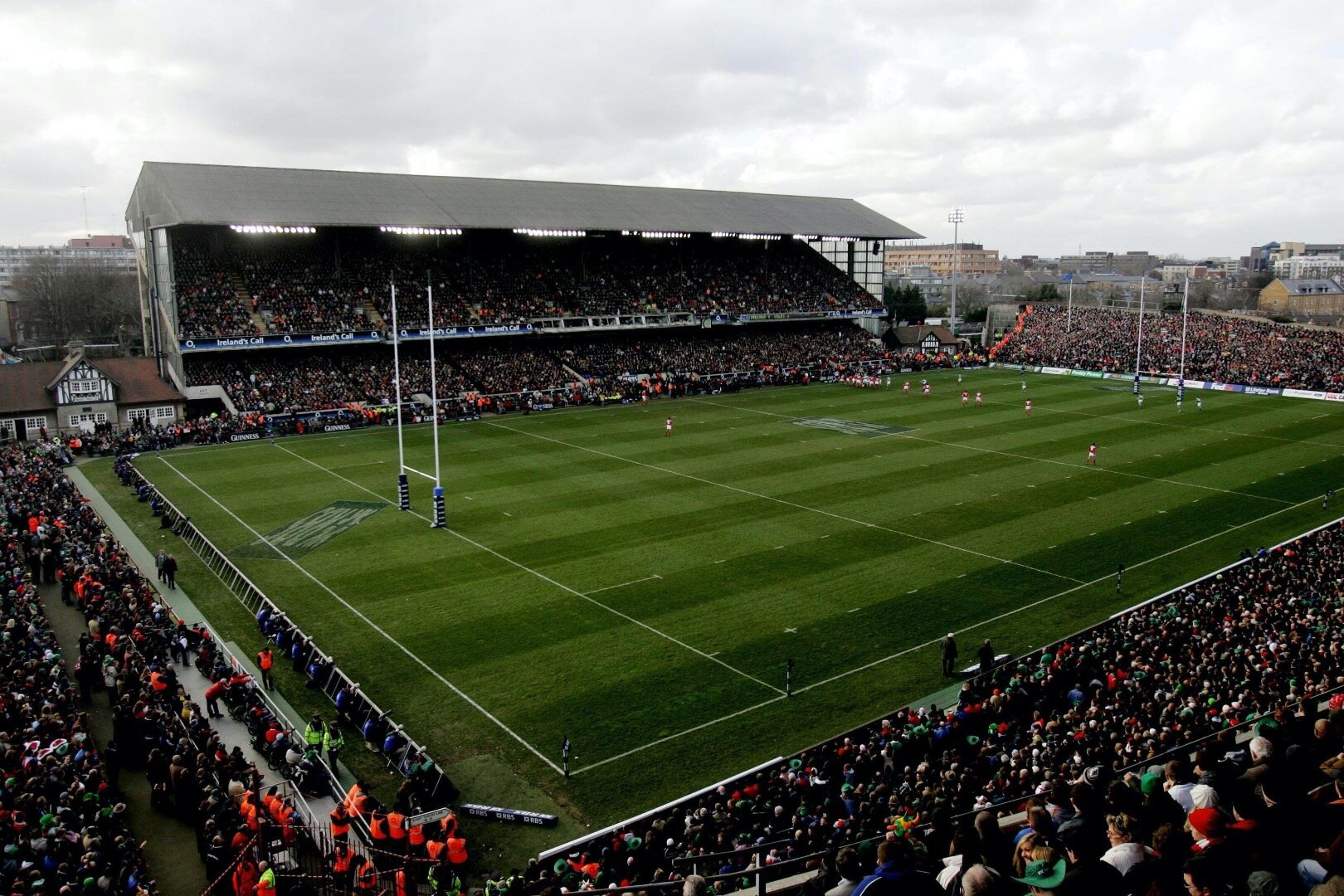 “It was fairly unique, you had the DART running underneath it, and you even had the unique spectacle of a clubhouse, and if you were lucky enough you might get in there for a pint before the game or whatever. But yeah, it obviously needed updating.

“It was good for the time, but ultimately time runs out.”

Just three years after the first wrecking ball cracked into the concrete at Lansdowne Road, the Aviva Stadium switched on its escalators and opened its automatic doors.

“It felt like a completely different place. It had a lot more toilets, for one thing!” Ross says. “But you couldn’t really look at anything and go, ‘Oh, that’s Lansdowne’… except for the DART still running underneath it.

“I remember going into the dressing rooms and it just being night and day to what came before it. You had access to hot and cold baths, there was a warm-up room in the back where we could practice line-outs and other stuff before we went out onto the pitch. We had the drive in underneath the stadium and then you get off the bus below (the stand.) It was all new to us.” 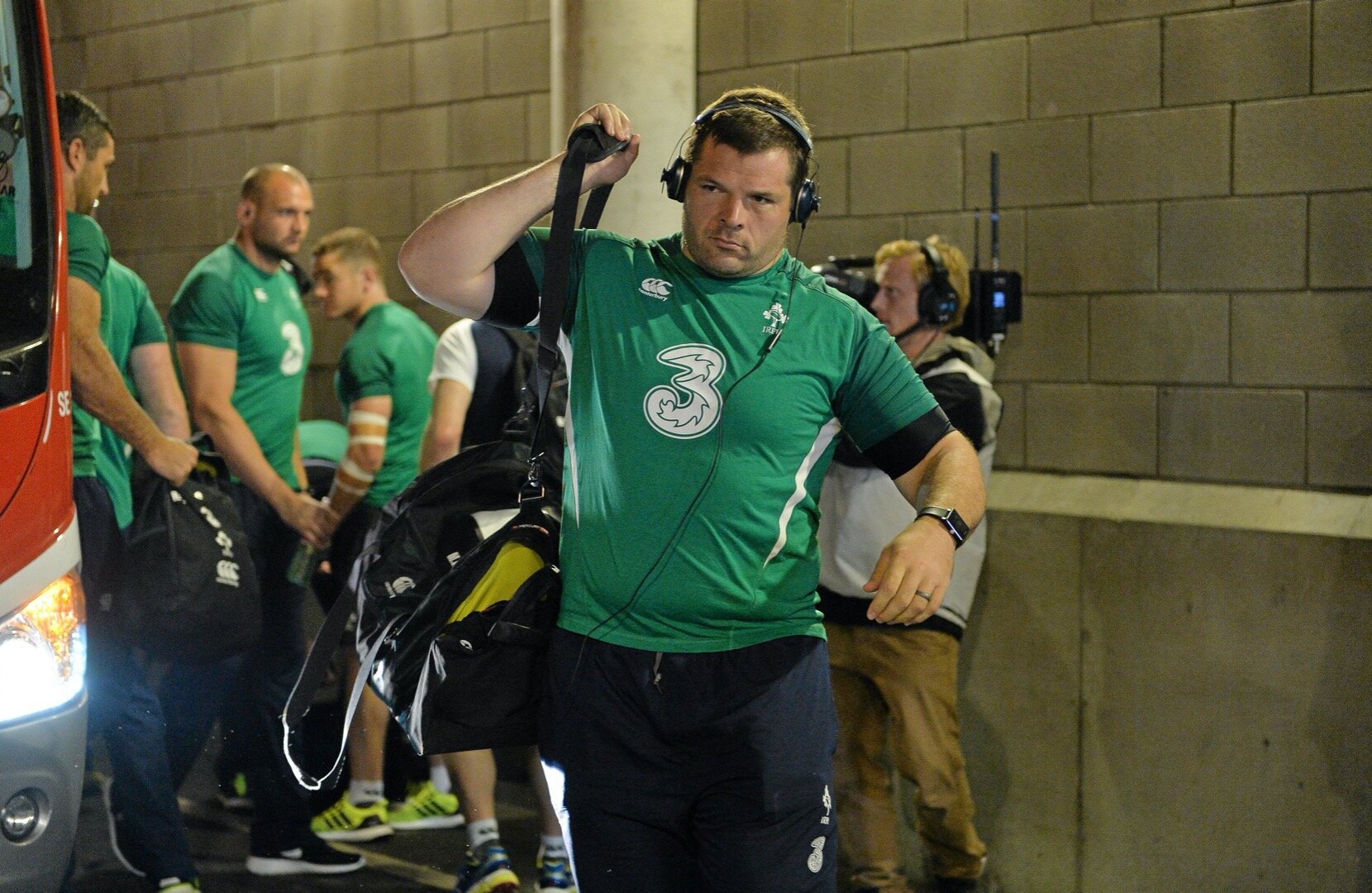 The dressing rooms, in particular, were a major upgrade.

“I remember they were kind of a U or an L shape in the old Lansdowne Road, so you couldn’t see everyone,” Heaslip says.

“The changing rooms were obviously pretty old school, but outside there was a guy in black tie who served you tea, coffee and biscuits. I’ll always remember after my first Test, I was buzzing, and then you’re having a cup of tea off this fella in black tie! It was the most bizarre thing ever.

“Now (in the changing rooms) you can see everyone, everyone is there and it works way better. There’s way more space when you’re prepping. I actually think it would be really interesting if they had a camera out there in the warm-up area, where you would have different lads (getting ready before a game). That’s where I would have warmed up the whole time, from whatever, 30-40 minutes before I got out on the field.

“That side of things is way, way better now. And then the facilities, there’s X-rays on site, the medical facilities are amazing. All that is class, and (was) needed.”

While Heaslip enjoyed the all of the trimmings that came with the new stadium, Ross was more interested in the bare essentials.

“The pitch was actually really good. Sometimes (before a game) I might be worrying about the footing underground. Is it going to cut up? What if it’s raining or muddy? Do I need the 21mm studs for this one? But with the Aviva you never had to worry about any of that.”

Like any major stadium rebuild, the project was not without its complications. For a start, it wasn’t initially clear if the IRFU would even be staying at Lansdowne Road, with a number of alternative venues bandied about. Eventually it was decided that Irish Rugby would remain at the site it had called home for over 100 years, but even that presented problems. Building in a residential area put the shackles on the Aviva’s architects, resulting in the swooping decline at the North Stand end of the ground, which only houses a single tier of seating and is dwarfed by the adjoining East and West stands. It also meant the Aviva would not have the option of a retractable roof, and, unusually for a modern stadium, some spectators would find themselves settling into new seats with restricted views. 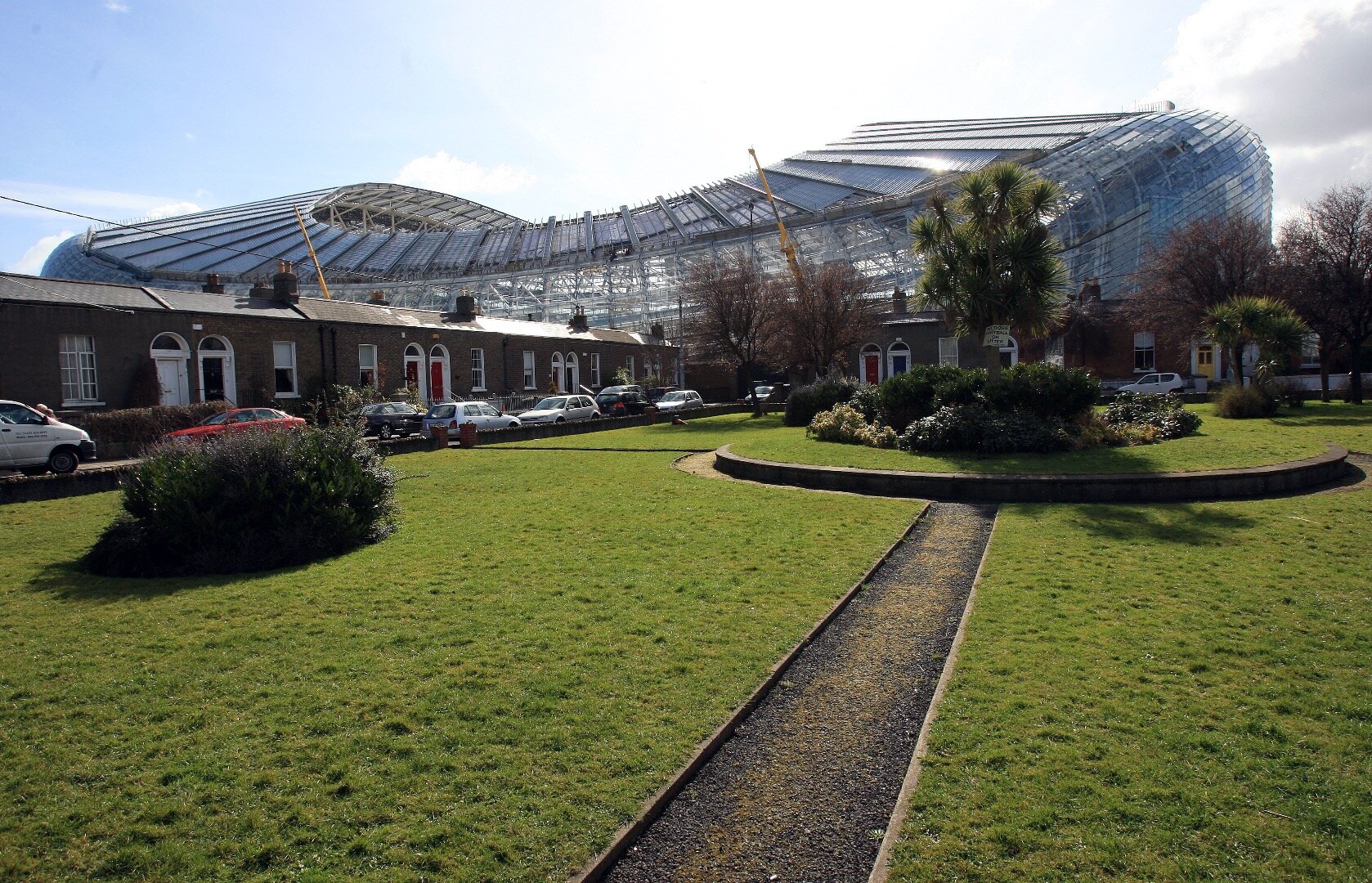 A view of the Aviva Stadium from behind the North Stand end. (Getty)

“There are different things you could maybe do better with the stadium, and I’m sure there are good reasons why they didn’t do certain things,” Heaslip says.

“The really good thing they did is they kept it there. We all remember the chat of it being moved out to somewhere, and all these different areas were talked about. I think that’s one of the unique things about that stadium, and others like Cardiff, these big great stadiums that are right in the mixer. It adds to the whole carnival atmosphere.”

Of course, the new stadium came packaged with new ambitions.

The message: Irish rugby now had a world class facility. The expectation: A couple of world class teams to follow.

Heaslip was aware it was never going to be that straight forward.

“I’ll take a step back and give you an example with Leinster. If you go talk to the academy players, they’ll be training down in Donnybrook. But those guys aspire to be up playing and training with the senior team, and to be up in the facility at UCD because of the bar that that is at.

“And it’s the same thing for players (with a new stadium), kind of going, ‘This is now the bar, this is now the expectation’, when you have those facilities around you. And then it becomes about the culture and how you make that and make the players buy into that and appreciate it. 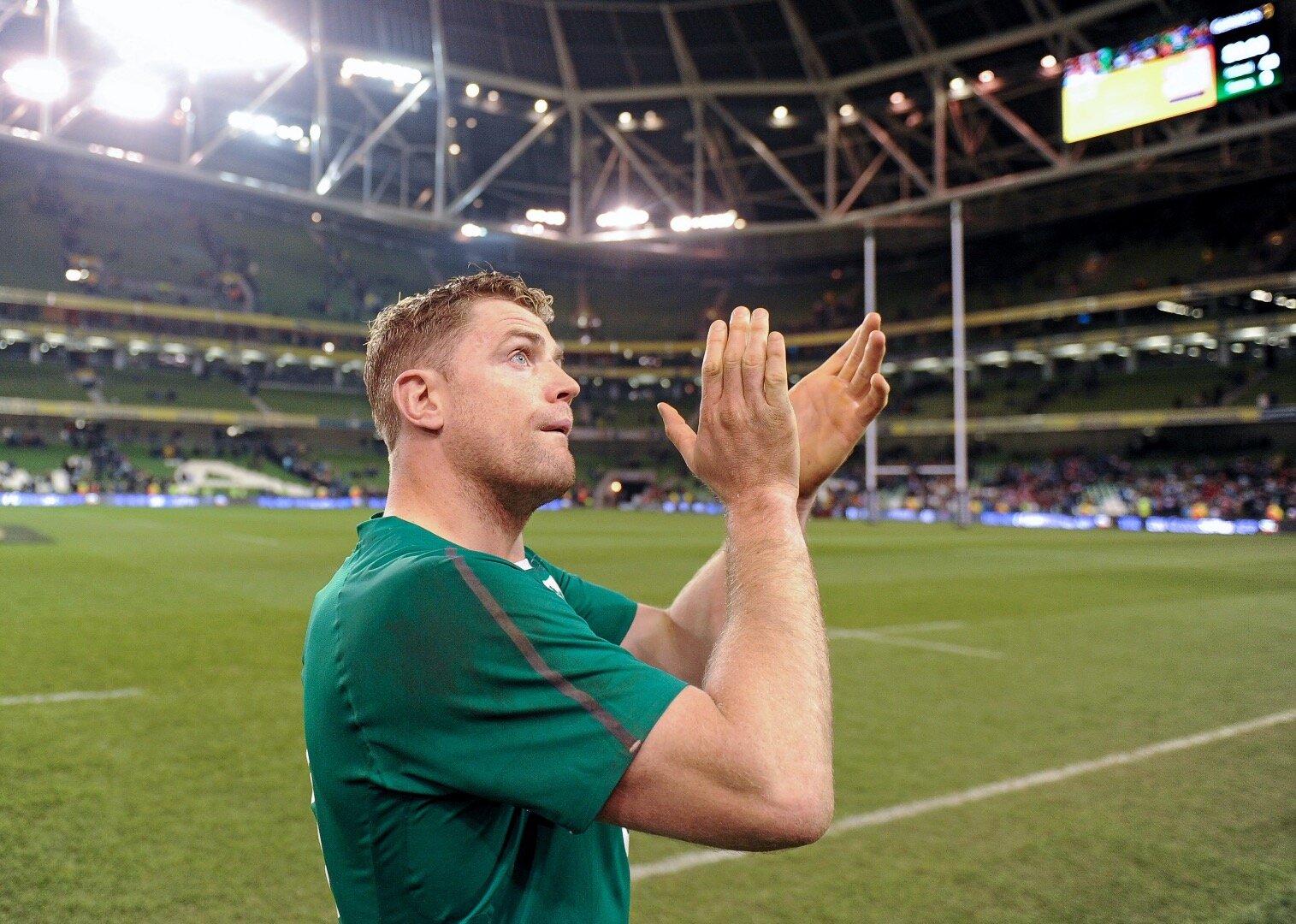 It didn’t take long for Leinster to find that blend and make the stadium a fortress.

They enjoyed an unbeaten start to life at the Aviva, beating Clermont, Leicester and Toulouse on their way to capturing their second Heineken Cup in 2011. They successfully defended their European crown the following year and would remain unbeaten in the Aviva until a powerful Clermont team returned to Dublin in December 2012.

The international side took a little longer to settle into their new surroundings.

South Africa were 21-23 winners in the first Test played at the Aviva in November 2010, followed by wins against Samoa and Argentina either side of a 20-point loss to New Zealand. Ireland then lost to France in the first Six Nations game at the stadium before a convincing defeat of England a month later. They wouldn’t put back-to-back wins together at the Aviva until 2012.

Their fortunes improved once Joe Schmidt stepped into the role of Ireland head coach in 2013, guiding the team to Six Nations success in 2014 and 2015.

While Ireland’s soccer team stuttered on the international stage, from a rugby perspective the Aviva Stadium quickly became associated with success, capped by the remarkable run in 2018, a year which saw Leinster follow up Ireland’s Grand Slam triumph with a historic European and Pro14 double. Later that year the stadium saw its most famous night as Ireland beat New Zealand on home soil for the first time. The Aviva had long become a place for visiting teams to fear.

“I think it was good for the game in Ireland in general to have a flagship stadium like that,” Ross says. “Like, look at the Millennium Stadium, that was great for Wales and bringing them on.

“But you have to build a history. It was a new stadium, so it took a few years for us to do that… (Eventually) you got used to winning there. You felt confident going out because we started to win a lot of games there. It probably gave us a mental boost from that perspective, knowing that you had more good days than bad days there.”

“When you start out (with Ireland there), we won some games, lost some games, but it did become a place that we felt was a fortress,” Heaslip adds. “There’s a lot of energy in that stadium now. Not that there wasn’t before… (but) where it is now, it’s impressive.”

Impressive, if not quite perfect.

“It’s a great stadium, but I don’t know… There’s a lot more they could have done with it,” Heaslip continues.

The story of a USA rugby player who can’t leave this small island to play rugby back in America ???
?
Coming soon to Rugbypass… #rugby @USARugby pic.twitter.com/wQKltgScX8

“Particularly when you look at how stadiums are set up in big American sports, and how they approach it. But it definitely is a massive transformation from where it was.

“All in all it’s a pretty cool facility. When you look at the different stadiums around the world, and considering that it’s not like a Melbourne or something where you have an area that you go to and they can build it all without any major restrictions on them… I mean, it is literally in the middle of Dublin, you know? When I look out my window when I’m in my bed, I see the stadium. That’s just mad.

“You don’t get that in a whole lot of places, a stadium as modern as that in the middle of a city.”