Halfpenny to make return Next
Back
Six Nations

It’s hard to imagine a more fitting scenario for the annual fixtures between Wales and England than for it to see both sides gunning for a Grand Slam, with the white-hot cauldron of the Principality Stadium set to play host.

With England finishing the tournament with two home fixtures, they will be confident of securing a Slam if they can tame the Welsh dragon on Saturday but equally, Wales will fancy their chances with home advantage. Whilst they face a slightly more challenging end to the championship, they will have momentum fully behind them if they can knock off the English visitors.

It should make for a tense and electric contest in Cardiff and although recent form suggests England should be favourites, the atmosphere generated by the home fans has proven a very effective leveller in years gone by.

We have identified several key head-to-head battles to watch out for on Saturday.

Continue reading below…
Watch: Eddie Jones talks to RugbyPass ahead of Wales

An all-Exeter Chiefs affair in this scrum battle.

In the red corner, Francis offers size and international experience advantages over his opponent, whilst he recently dealt well with a gargantuan French pack and the strong-scrummaging Jefferson Poirot. With Taulupe Faletau injured, Wales will need Francis to step up his ball-carrying in Cardiff on Saturday and help his side win the battle at the gain-line.

In the white corner, Moon brings a mobility and work rate in the loose that Francis arguably doesn’t have, whilst he is also one of the most adept scrummagers in the English game. He will feel confident emptying the tank inside 60 minutes at the Principality Stadium, safe in the knowledge England will be planning on using the impactful Ellis Genge to finish the contest. It will be fascinating to see which of the two clubmates has better diagnosed the chinks in the other’s armour.

It’s remarkable the level Jones continues to play at, despite being 33 years of age and having over 122 Wales caps of gruelling physical punishment under his belt. He is still the hard-working and influential lock that he was 10 years ago, only know it is coupled with more experience than any other international second row out there. He will need to have the set-piece running efficiently if Wales are to hold serve at home and keep their Grand Slam hopes alive.

As for Lawes, he may not have Jones’ experience, but he is consistently delivering the highest level of performances for England. It’s been a long time since he was just a highlight reel tackler and the Northampton Saints second row has added work rate and technique in the loose, particularly as a carrier, which has been key to England’s new-found successes at the gain-line. He stole two throws against France and will have his mind set on doing likewise against Wales.

Tipuric may very well be the most predatory openside flanker in the northern hemisphere. Both as a fetcher trying to steal ball at the breakdown and as a support runner for teammates making line-breaks, there are few who can match the Welshman’s skill. England’s ball security at the contact area has been strong across their first two games and if Tipuric can disrupt that, then maybe he can disrupt England’s larger game-plan.

For all the praise heaped upon Mark Wilson – all of it deserved, by the way – Curry has drifted a little under the radar so far this championship. He shouldn’t have, though, as his work at the breakdown has been impressive on both sides of the ball, and he has repeatedly hunted down opposition fly-halves deep behind the gain-line. What should excite England fans most, however, is not just how good he is now, but how good he could be two or three years down the road. 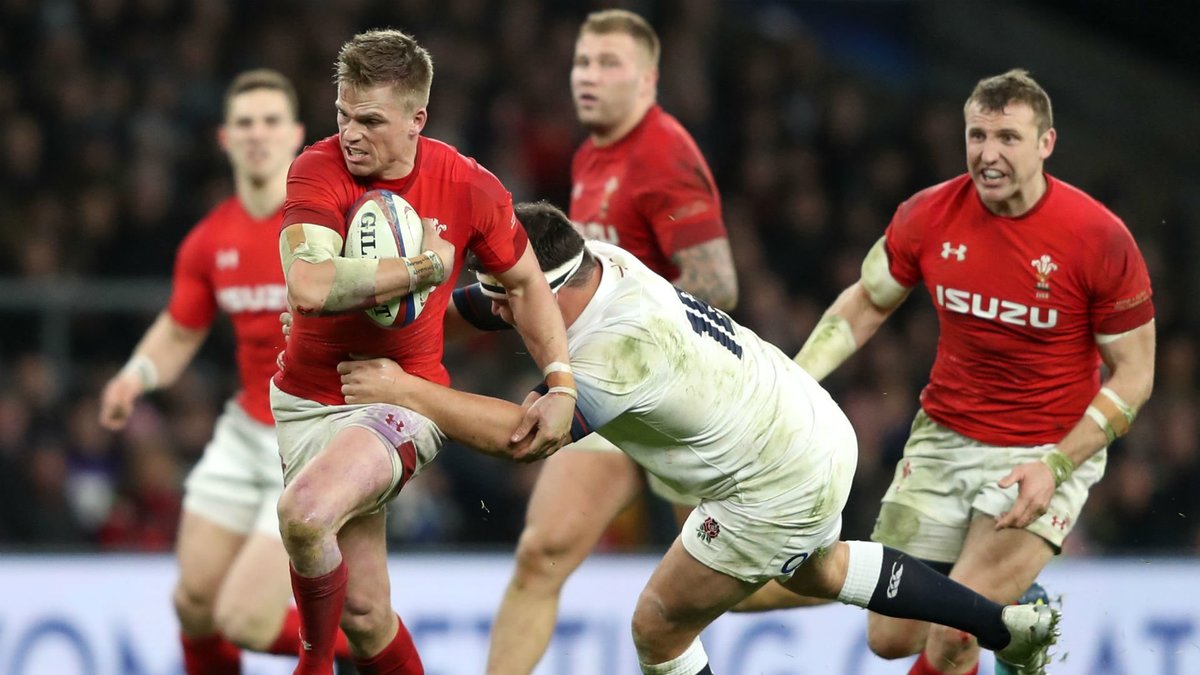 Gareth Anscombe makes a break for Wales against England in 2018. (Getty Images)

After being rested from the XV against Italy, Anscombe resumes his duties as the starting Welsh fly-half. His work at the heart of Wales’ back line has been a big component in their rise to prominence over the last 18 months, with his ability to see and exploit the space on the rugby pitch a key factor in ending fans’ discontent at the so-called “Warrenball” approach to play of previous Welsh sides. With England’s press defence in such good shape over the first two games of the championship, there will be a lot of pressure on Anscombe as a decision-maker in Cardiff, with the opportunities to catch out an aggressive defence likely to be there if he can execute.

Farrell continues to go from strength to strength with England and he has looked unburdened by the additional responsibilities of being sole captain in Dylan Hartley’s absence. The attacking execution that he has brought for a number of seasons now is still in place and he has coupled that with a calmer leadership style, as well as keeping the tackle height under control. A relatively restrained and calm Farrell is arguably one of the most influential players on the planet, and one that opposing nations will fear.

One of the few players to start both the game against France and the one against Italy, Davies comfort in his role will be key to securing a potential win for Wales. England’s kicking game has been under the microscope over the last couple of weeks, but their ability to put tempo and width on the ball and turn the corner outside of the defending 13 has also been impressive and is something Davies will need to shut down. All his years of experience in defence will need to be called upon, especially as he has to track the contrasting threats of Manu Tuilagi and Slade.

Speaking of Slade, he looks like a different player outside of Tuilagi. Where he was caught tight in the autumn and looked hesitant in an England jersey, he is now playing with the freedom and confidence that has seen him excel with Exeter. If he continues to mix up his game and rotate inside and outside with Tuilagi, he should prove a handful for Wales, but in Davies he is arguably facing his toughest opponent so far this year.

In other news: Sonny Bill Williams linked with code switch and move to North America