Barrett saves Hurricanes from storm Next
Back
Gallagher Premiership

Liam Williams and Danny Care both resumed Anglo-Welsh hostilities as they were both binned during a heated local derby in the London Stadium.

Will Skelton took centre stage at the London Stadium by rescuing Saracens with two unstoppable short-range tries in a 27-20 Gallagher Premiership victory over Harlequins.

The champions fought back from a 17-6 interval deficit through touchdowns by Schalk Burger and Skelton to breath life into a capital derby that had served up a dismal first half in front of a 42,717 crowd.

Quins were able to capitalise on the repeated mistakes made by Saracens to seize control when half-backs Marcus Smith and Danny Care crossed.

But the match was turned on its head from the moment the second half began and the fightback was done the hard way after Billy Vunipola and David Strettle had tries disallowed.

A controversial decision at the London Stadium as Danny Care and Liam Williams are both sin-binned.

Saracens are back behind… pic.twitter.com/8OcobAEU3v

On both occasions JP Doyle’s decision-making was disputed by Saracens, who claimed that the referee should have allowed the scores to stand. The second ended with Care and Liam Williams being sent to the sin-bin for a lengthy scuffle.

But the home pack had woken up and it was another muscular short-range drive by Skelton, the outstanding Australia lock who was also named man of the match, that ultimately subdued Harlequins.

The bitter London rivals paraded five starters from the recent Guinness Six Nations, but it was a low-quality showdown that would have given England head coach Eddie Jones, who was watching from the stands, few selection pointers.

Quins had the better of an underwhelming start marred by a succession of errors, with Mike Brown’s hard running from full-back the highlight until Smith rifled over a penalty. 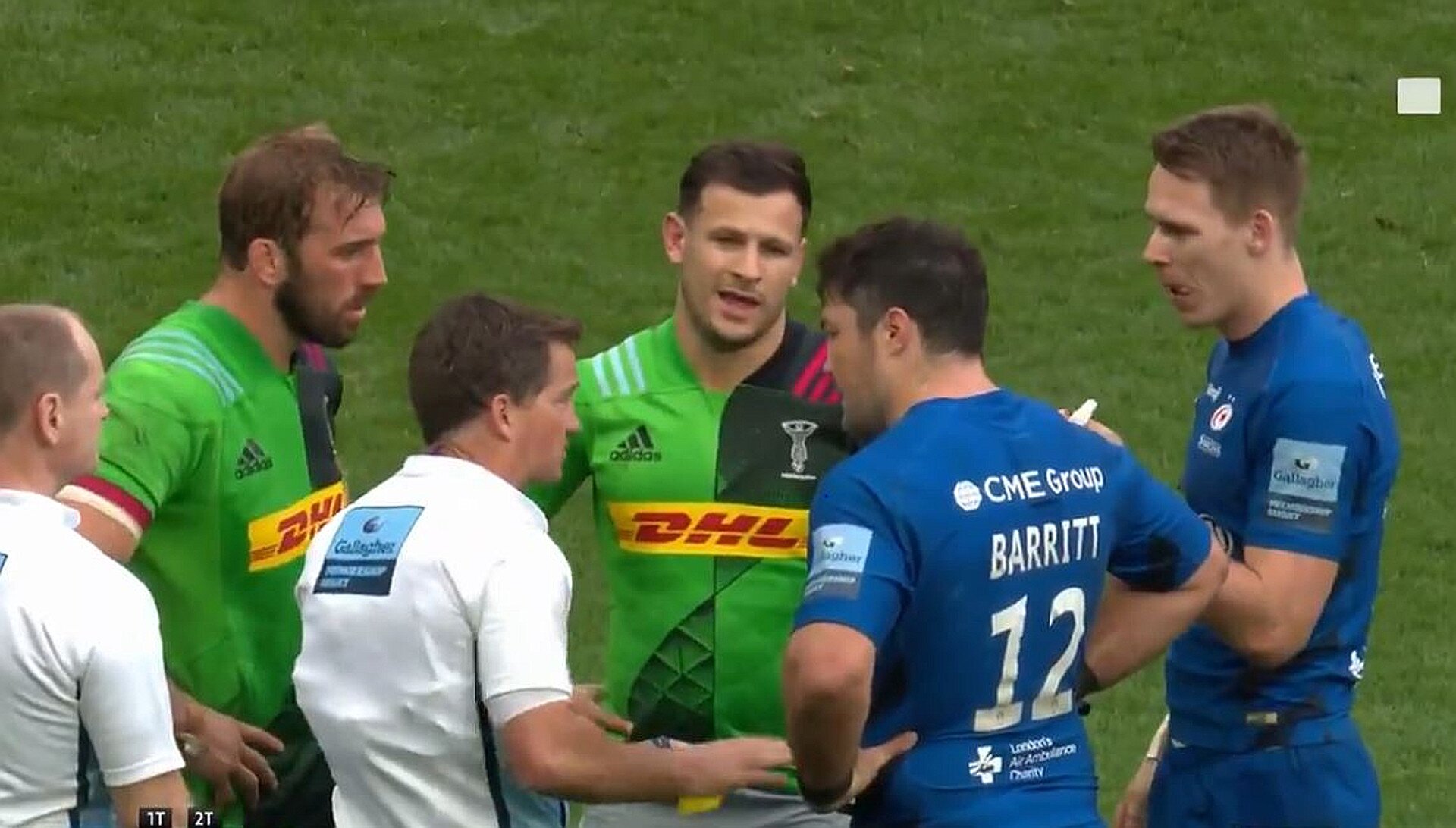 Knock-ons by Vunipola and Vincent Koch continued the stop-start theme but Quins should have scored down the left wing on the half-hour mark when Brown wriggled his way into space and fed Joe Marchant. Strettle covered back brilliantly to halt Ross Chisholm from 20 metres out.

Koch’s poor afternoon was then brought to an end by a head injury assessment.

The breakthrough arrived shortly after, however, and this time the home defence was culpable as a line-out move was recycled and Smith darted past Alex Lozowski and sprinted over.

Lozowski kicked a penalty but then committed the blunder that allowed Quins to hit back by kicking for touch thinking the half was over, only for Doyle and the TMO to judge otherwise. It offered Quins an attacking line-out and Care showed his wits to slip over.

Vunipola appeared to have responded by bulldozing through a tackle by Chris Robshaw to storm over, but the number eight first clattered through Doyle and in the process Harlequins’ openside was unable to pick his preferred route to the tackle.

Upon reviewing the incident, the TMO decided the try should stand but he was over-ruled by Doyle.

Saracens were now playing with greater urgency and following a series of pick-and-goes from the forwards, Burger was driven over under the posts with Lozowski converting.

Quins resolutely defended a five-metre line-out but the waves of home attacks continued and another try was disallowed when Strettle’s finish was pulled back because of a tangle between Williams and Care.

But it was merely delaying the inevitable as Saracens’ big forwards relentlessly punched holes until Skelton used his giant frame to crash over to give his side the lead for the first time.

Smith landed three points from long range to level the score just inside the final quarter, but it was still one-way traffic and Skelton underlined the point by claiming a second try in similar fashion.