Sinckler-Dickson incident was three refereeing conundrums rolled into one

Sinckler-Dickson incident was three refereeing conundrums rolled into one

As every PE teacher knows, refereeing your own team is the job from hell. If they perform well and win, in the eyes of their opponents (and especially their one-eyed touchline ‘experts’) the whistler is a sixteenth player.

Since most of us are intuitively honest, this fear tends to promote inverse behaviour with every 50-50 decision going against the referee’s own team, who in turn come to dread him being in charge.

“He’s not a good person to rehab with. He’s literally done five calf raises the other day and he’s put on 4cm of muscle mass.”

Premiership referee and former Harlequins scrum-half Karl Dickson had a taste of this experience on Saturday – and to his credit dealt with it very well.

While taking charge of the top flight’s most significant game of the season to date, when champions Exeter and their main rivals Bristol put our full-strength sides at Sandy Park, Dickson came eyeball-to-eyeball with his former Stoop teammate Kyle Sinkler.

The Lions tight head, who is seemingly never short of an opinion, was picked up by the pitch microphone to harangue Dickson with: “are you f****** serious” when their view of a ‘no-arms’ tackle failed to converge.

Really poor form by Kyle Sinckler screaming “Are you Fu**ing serious” at referee Karl Dickson. They are ex teammates but it should have been a yellow card. We berate footballers for similar so we don’t want this in rugby and should respect the ref! pic.twitter.com/m4zWaIwIGV

A TMO intervention subsequently proved Sinckler correct, but nonetheless he got a stern ticking off from Dickson, and was fortunate that his outburst did not cause the penalty to be reversed or earn him a yellow card. I’m sure I wasn’t alone in wondering how they got on as teammates and whether they spoke about it afterwards…

As Dickson’s refereeing progresses the need to manage contemporaries (and thus avoid the PE teacher moment) will become a thing of the past, since his time with the whistle will outlast their playing careers. Who knows, in time he may even take charge of a Harlequins game – or is that a step too far?

His familiarity with the current crop of Premiership talent also brought another talking point through his consistent use of players’ Christian names.

This seems something of a cause celebre for a number of our sport’s top pundits who believe it overly familiar and representative of someone with a cringeworthy desperation to be the players’ mate.

Of course, the quickest way to get someone’s attention is to use their name. Hence “Ben… stay onside” is more effective than “stay onside.”

In addition, when under pressure and looking directly at a player’s face, a name often comes one thought process quicker than a number. ‘That’s Ben Earl, I need to warn him to stay onside, now is he wearing six or seven?’ The moment is gone and the game stops for a penalty. 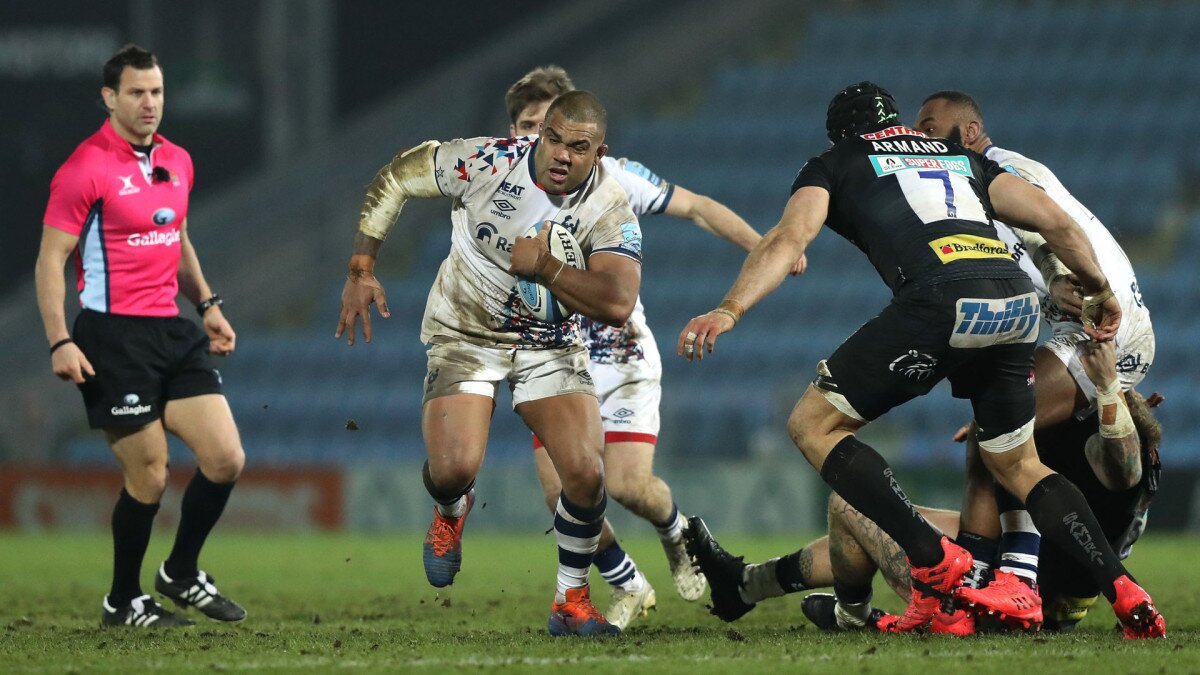 That said, unless the referee is confident all 46 players are identifiable by name this is an approach fraught with danger especially when language and cultural barriers intervene. Both sides must both receive and be seen to receive equal treatment from the referee – so if you don’t know (say) all 23 Italian players then Owen Farrell has to be ‘white 10.’

The rapid promotion to IRB refereeing status of former top-flight players such as Dickson seems on one level to make plenty of sense, and is something cricket – with fewer physical demands – has done for years.

After all, big game temperament is already proven as is game understanding which greatly assists with positioning.

Learning the laws is the simplest part of being a referee; knowing how to apply them and how to manage 46 highly competitive athletes all seeking to gain a tiny edge by whatever means available is a much bigger challenge.

'We all heard that Kyle Sinckler' ?#BRIvsEXEhttps://t.co/dyvVBD9vHi

Management can be taught, but does not come naturally to everyone. This is where match officials who reach the top via a traditional time-served route – perhaps arriving in the Premiership with several hundred games under their belt – have an advantage over very recent former players.

Since rugby has gone professional, mobility and running fitness is also high on any aspiring top flight referee’s skills list. It is no co-incidence that most of the sport’s top officials are former backs – or ‘career referees’ who began in their teens with the physique of a middle-distance runner.

Since scrum halves routinely top most clubs’ bleep testing charts while frontrowers lag several levels behind, this seems to place another big tick in Dickson’s career advancement box, but there are two sides to this coin.

As he blew penalty after penalty then issued a pair of yellow cards to uncompliant Bristol and Exeter front rowers, it would have been interesting to see how former Gloucester prop Nick Wood, now also a referee, but presumably one whose fitness test results reflect his former status as piano shifter rather than a pianist, would have handled the same situation.

Mana rising Despite coming in as an interim coach, Clayton McMillan had no intentions of sitting on his hands. Michael Pulman On the hook The fire that burns within Dane Coles is raging still, which is why he’s put off retiring. Gregor Paul Push the pass The All Blacks' offloading game has faded dramatically since Wayne Smith left the coaching fold. Ben Smith Pacific pathway Moana Pasifika's genesis is the first step to helping Pasifika rugby thrive, but an important one nonetheless. Gregor Paul That winning feeling After a torrid year, the Chiefs have finally rediscovered the lost art of winning. Tom Vinicombe