Scotland see off Italian threat Next
Back
Internationals

Scotland player ratings: One can only presume that the Italians watched the Pumas upset win over New Zealand earlier in the day, such was the ferocity of their performance in Florance. The Azzurri played like men fighting for their very place at rugby’s top table.

Gregor Townsend’s charges may have run out 28-17 in their maiden Autumn Nations Cup appearance, but sadly, once again Scotland have failed to kick on from a big performance the week before. Here’s our Scotland player ratings:

15. STUART HOGG CAPTAIN – 5
The Scottish skipper was kept busy by the Italians and his booming boot regularly relieving pressure for his teammates. Got caught when waiting for a chip over the top to dribble its way across Scotland’s line, with Luke Pearce spotting the Exeter Chief carrying it over.

14. DARCY GRAHAM – 6
Didn’t see a huge amount of ball in the first half and had three missed tackles to his name after the first 40 minutes. Got a few more touches in the second and was unlucky not to score off a hard-fought Thomson turnover, bumping a defender before being brought down in Italy’s 22.

13. CHRIS HARRIS – 5
He’s tremendously effective in defence but the big centre’s handling let him down at times.

12. SAM JOHNSON – 5
Some fine handling helped put Weir away at the start of the second-half. A relatively quiet outing. 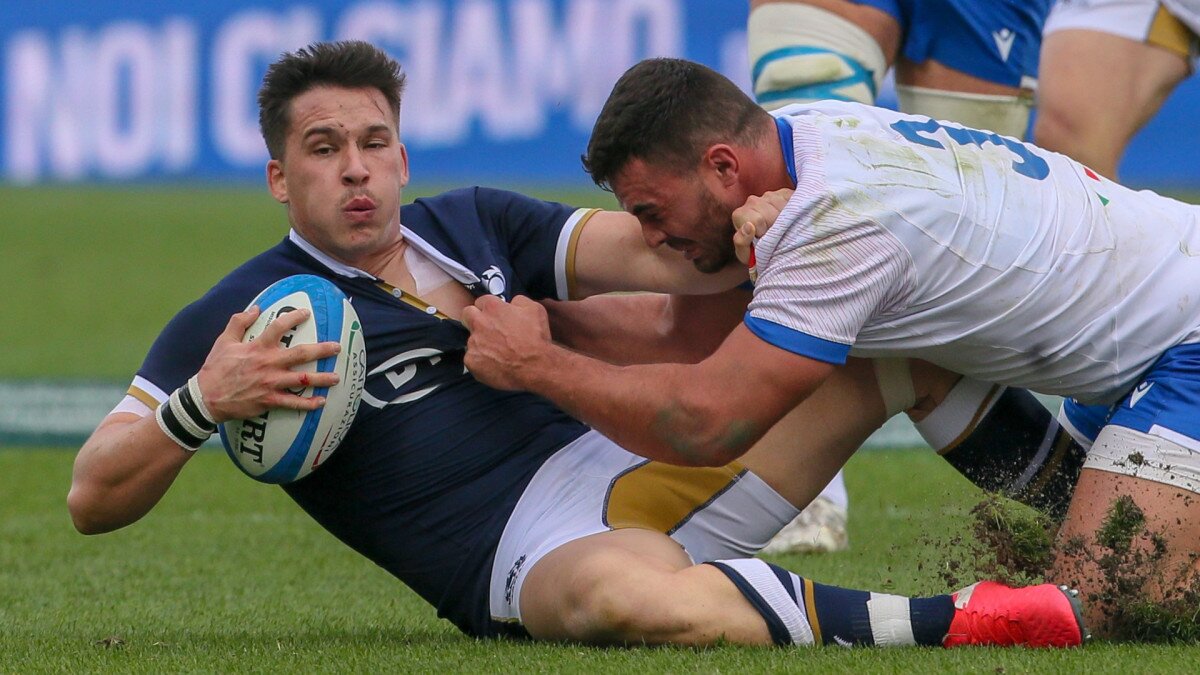 11. DUHAN VAN DER MERWE – 8
The big man came in off the wing to score his second try in as many games for Scotland. A 6’4, 106kg strikes runner, Van Der Merwe poses an imposing, predatory threat on the Scottish flanks and 119 post-contact metres from 9 carries made him Scotland’s most potent attacking weapon by a stretch.

10. DUNCAN WEIR – 7.5
It’s been a minute since ‘Meatball’ last pulled on the blue jersey and getting bumped off by centre Marco Zanon for the Italian’s opening try will have stung the Worcester Warrior. That said, he made up for it, playing teammates into gaps and kicking Scotland around the park. Kept the troops gee’d up with plenty of verbals and was rewarded with a try of his own.

9. ALI PRICE – 6
Controlled the game well, even if the speed of his service waxed and waned at times.

1. RORY SUTHERLAND – 3
Maybe the first time that Sutherland has ever truly been rolled at Test level at scrum time. The sight of him being carried off after 16 minutes will worry Townsend and co.

2. STUART MCINALLY – 6
A return to form for the co-captain, whose industry impressed on both sides of the ball.

This one hung in the balance for quite a while #ITAvSCO #AutumnNationsCuphttps://t.co/yjZZjU1DNG

3. ZANDER FAGERSON – 7
After an appalling start at scrum time, Fagerson was all smiles when he flopped over the line to grab a rare try in odd circumstances. A massive, pressure-relieving turnover in the 65th minute would also prove crucial.

4. SCOTT CUMMINGS – 6
Grabbed a vital Scotland try after the blue brigade pitched up at the Italians try line. It was just reward for a solid shift.

5. JONNY GRAY – 5
Missed two tackles, a real anomaly for one of professional rugby’s most effective and machine-like tacklers. Struggled to make metres post-contact despite nine carries.

6. JAMIE RITCHIE – NA
Lost the battle to contain Italian loose-forward Bram Steyn in the early exchanges and came off injured after just 14 minutes with a HIA and didn’t return.

7. HAMISH WATSON – 7
Was typically limpet-like over the ball on the back foot. It’s his explosive carrying ability marks him out from the breakdown masters like Pocock, Warburton and McCaw and he was central to Scotland’s fight back.

8. BLADE THOMSON – 5
Part of a back row unit that was collectively and individually outplayed by their opposite numbers in the first half. A masterful turnover from the Scarlets No.8 nearly resulted in a try for Graham.

17. OLI KEBBLE – 6
The hulking prop was frequently involved after coming on early, even if at times his skill level didn’t quite match his ambitions. His heft and power told and he was heavily involved throughout.

20. NICK HAINING – 5
Despite coming on as a sub for Ritchie, he was subbed off for Sam Skinner around the 60-minute mark. Struggled to make a mark on the game.