Harlequins overcame Andre Esterhuizen’s dismissal in the 45th minute to record a superb 34-24 victory over Gloucester in a pulsating game at Kingsholm.

The South African was shown red for an elbow to the face but it did not stop Quins’ momentum as they ran out convincing winners over an injury-ravaged Gloucester. 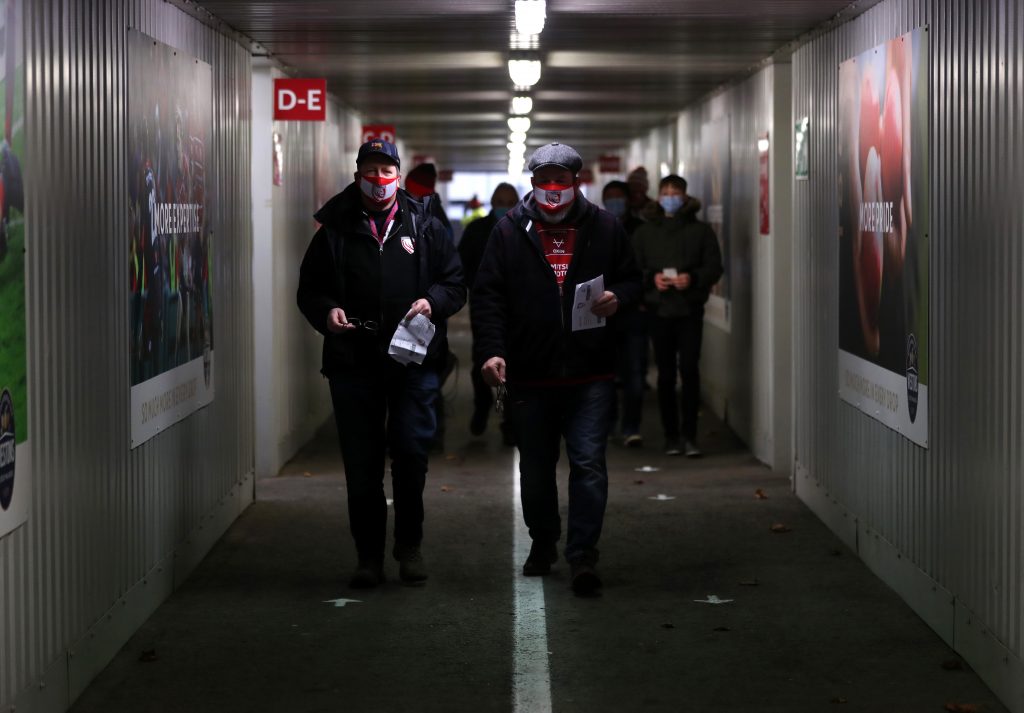 Why players are going Japan:

Why players are going Japan:

Alex Dombrandt scored two tries for Harlequins, James Chisholm and Nathan Earle the others, with Marcus Smith converting all four and adding a penalty and a drop goal.

Harlequins made a bright start to take the lead with an excellent try in the fourth minute. First Smith chipped over the defence for Esterhuizen to collect and when the ball was recycled, Smith was again in the action to send skipper Dombrandt powering over.

Smith converted before Twelvetrees kicked a straightforward penalty to put the hosts on the scoreboard.

The game erupted in the 19th minute when almost all the players were involved in a prolonged dust-up and after the referee had restored order, yellow cards were shown to both loose-head props, Jamal Ford-Robinson and Santiago Garcia Botta.

The visitors had been the better side in the opening quarter and they extended their lead with a simple penalty from Smith but with their first sustained period of pressure, Gloucester responded with their opening try when Ruan Ackermann sent Slater crashing over in the corner.

A superb touchline conversion from Twelvetrees brought the scores level before the props returned from the sin-bin.

Eight minutes from the interval, Gloucester suffered a blow when Twelvetrees departed with a leg injury. 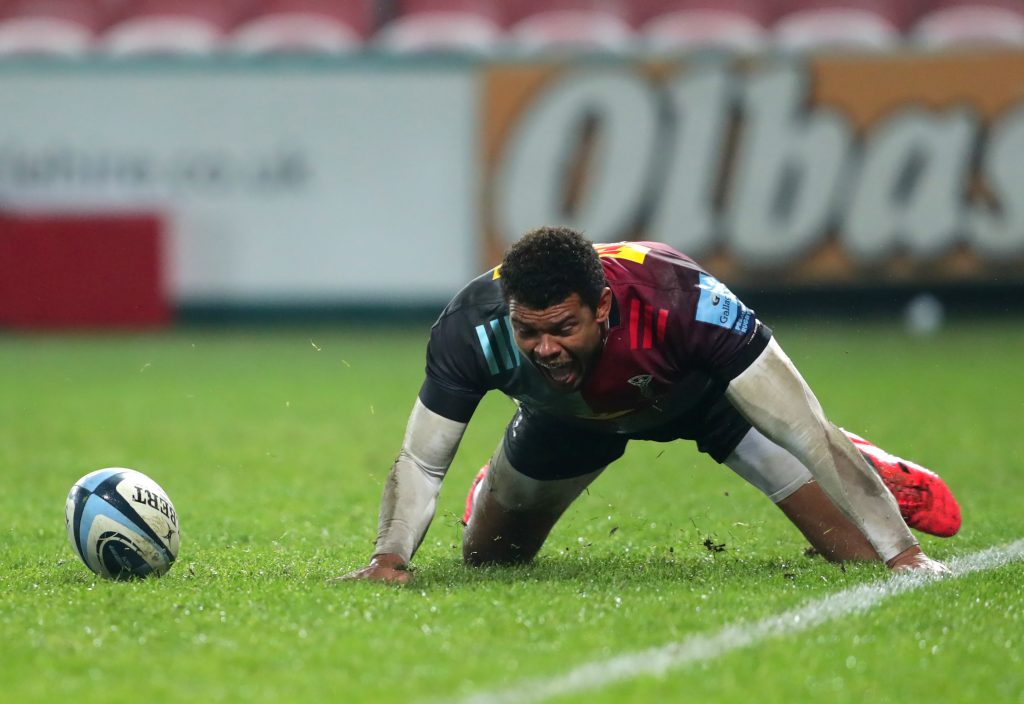 The home side received another setback by conceding a second try when Chisholm drove over from close range, with Smith’s conversion giving his side a deserved 17-10 half-time lead.

Gloucester replaced Joe Simpson and Jack Stanley at the interval but five minutes after the restart Esterhuizen was sent off after countless TMO replays. 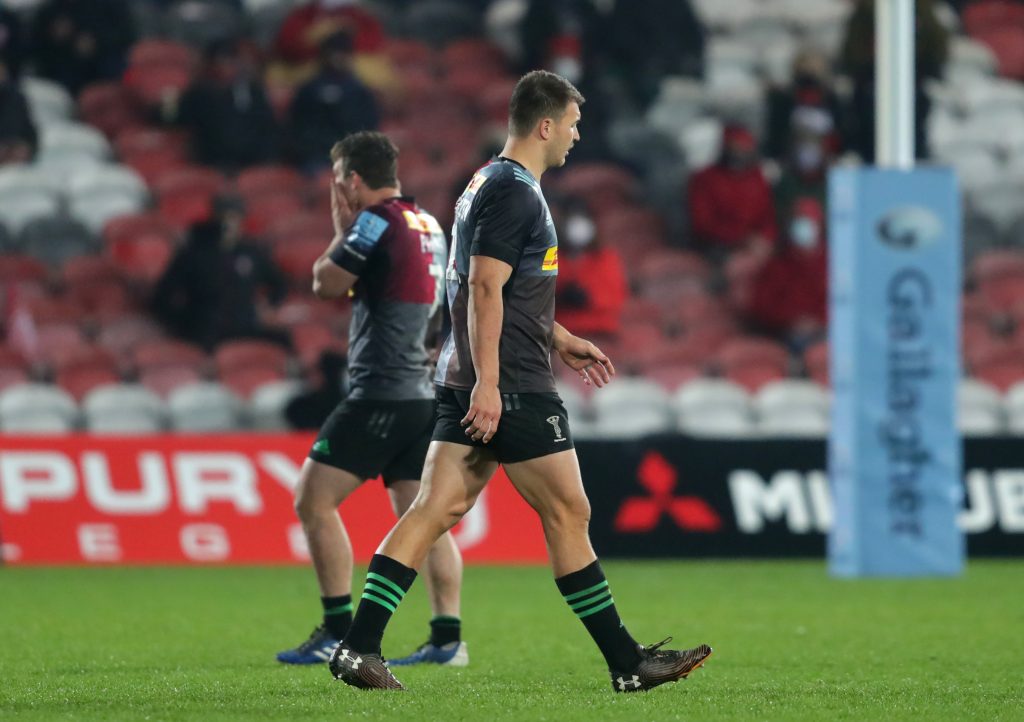 Two minutes later it got worse for Quins when lock Glen Young was sin-binned for collapsing a driving maul, but this was somewhat offset by Gloucester’s already disrupted back division losing fly-half Lloyd Evans to injury.

Quins still only had 13 players on the field when they scored a third try. Another well-judged kick from Smith resulted in Earle winning the race for the touchdown. 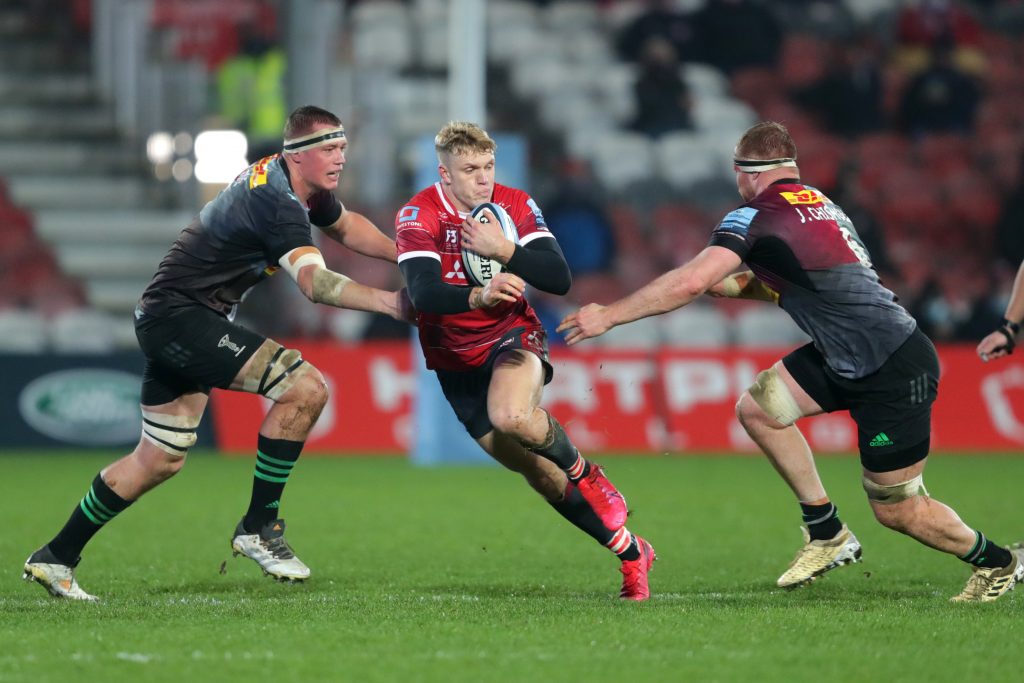 Young returned from the sin-bin in time to see his side score their bonus-point try when Gloucester failed to deal with an up-and-under from Danny Care and Dombrandt was on hand to race away for his second.

The game was up for Gloucester but they rallied to score two close-range tries from replacement hooker Hanson, before the impressive Smith landed a drop goal.