END_OF_DOCUMENT_TOKEN_TO_BE_REPLACED

If it's to be Borthwick he needs someone with years of experience behind him, someone who has been a number two at a World Cup maybe.... Like Eddie Jones?!!! If not, is there a chance in hell of convincing Wayne Smith to go on one last rodeo?

END_OF_DOCUMENT_TOKEN_TO_BE_REPLACED
'My players are not safe': Ex-All Black at the centre of high shot controversy
A
Akansagena 7 hours ago

They certainly aren’t “safe” against these SA marauders. On another note: absolutely a penalty for raising a knee: worse than leading with an elbow. Not even up for debate. Good ole article SS, couldn’t think of anything else to write about with an entire weekend of rugby?

Wales new star Louis Rees-Zammit is creating waves in all sorts of places after a starring two try performance over Scotland in round two of the Six Nations.

His starring role came after scoring in the win over Ireland last week, with now three tries in in his first two Six Nations appearances this year.

His popularity is skyrocketing across multiple demographics, the most startling of which is with young females on Twitter & TikTok who have become enamoured with the 20-year-old star.

Rees-Zammit is becoming a figurehead for Generation Z, who owns an account on the popular Chinese music sharing app where fellow female TikTokers were falling over themselves upon finding it.

The Welsh wing’s account was swamped with comments from swooning ladies ready to make ‘LRZ’ the poster boy of Welsh rugby.

Many commented they are ‘simping’ him, a term which means to ‘perform excessive sympathy and attention toward another person’.

They were clammering to tag their friends after finding his account, and let Rees-Zammit himself know of their availability for Valentine’s day.

One fan wrote “I’m free on 14th feb btw, like not one plan at all x x x x’ another wrote ‘get me to Cardiff Uni now’, ‘he’s finally got TikTok omg’.

The account was inundated with hundreds of comments of a similar vein. 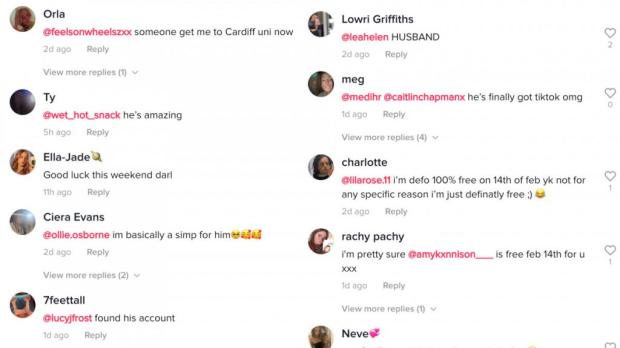 Some TikTokers proclaimed their ‘FYP’ is all about him, the ‘for your page’ home section of videos that the algorithm self-selects for each individual based on previous viewings.

TikTok wasn’t the only platform in a flutter, with plenty on Twitter making it known that Rees-Zammit is now the hottest property in the game.

louis rees-zammit i am free feb 14th just saying feb 14th i will be free. i have no plans on feb 14th.

Louis Rees-Zammit – that is all ?

Bet Louis Rees Zammit is loving the amount of tiktoks 18 year old girls are making of him……… well for some.

Only now able to write – so gutted????????????????- we tried , we lost but WOW that Welsh wonder kid Louis Rees Zammit is something special @blackoutbedford #GuinnessSixNations #SCOvWAL

Mad to think how Louis Rees Zammit has played 4 times internationally and already has the entire county simping over him ????????

With rugby needing to engage with a younger audience, Louis Rees-Zammit’s new found stardom with a relatively untapped demographic could be a door opener for rugby.

Wales and the Six Nations will hopefully capitalise on this new audience and break a new frontier into the world of TikTok.

A Louis Rees-Zammit poster could be on the wall of every teenage bedroom by the end of this year’s Six Nations if LRZ-mania continues, while the 20-year-old may need to hire admin help for his TikTok to manage all the replies.