'Get the ball and run': Australian dual-code great's advice to Roger Tuivasa-Sheck ahead move to union

Former Wallabies and Kangaroos wing Lote Tuqiri has offered NRL star Roger Tuivasa-Sheck some advice ahead of his high-profile move to rugby union.

Warriors star Tuivasa-Sheck confirmed on Saturday that he will leave rugby league after the 2021 NRL season to chase his All Blacks dream following reports of a code switch earlier this week.

In doing so, he follows a raft of other players who have jumped between the two sports in years gone by, including Tuqiri, who flourished in both codes.

Beginning his professional rugby career in league with the Brisbane Broncos in 1999, Tuqiri won an NRL title the following year, represented Queensland six times, the Kangaroos five times and Fiji three times between 2000 and 2002.

A move to union came in 2003 after he signed a deal with the Waratahs, and he made his Wallabies debut that same year.

After starring for Australia en route to their runners-up finish at the 2003 World Cup, Tuqiri stayed on with the Waratahs and Wallabies through until 2009, and featured at the 2007 World Cup in France.

Following a brief stint with English club Leicester Tigers, Tuqiri returned to league, joining the Wests Tigers in the NRL in 2010.

His performances for there earned him a further four tests for the Kangaroos at the 2010 Four Nations, before he moved to the the South Sydney Rabbitohs in 2014.

It was with the Bunnies where he earned both a second NRL title and a further test appearance for Fiji in the final season of his career.

With such vast playing experience across both codes, Tuqiri is well versed in the difficulties of jumping between the two sports.

However, the 41-year-old told Fox Sports that Tuivasa-Sheck, a NRL title-winner with the Sydney Roosters in 2013 and recipient of the Dally M Medal in 2018, has all the attributes required to succeed in union.

“I played Roger in his younger days, in 2013, and he is an unbelievable athlete,” Tuqiri said.

“I think with a little bit of work, just with rules and positional play and this and that, I think he would have no problem with the transition.” 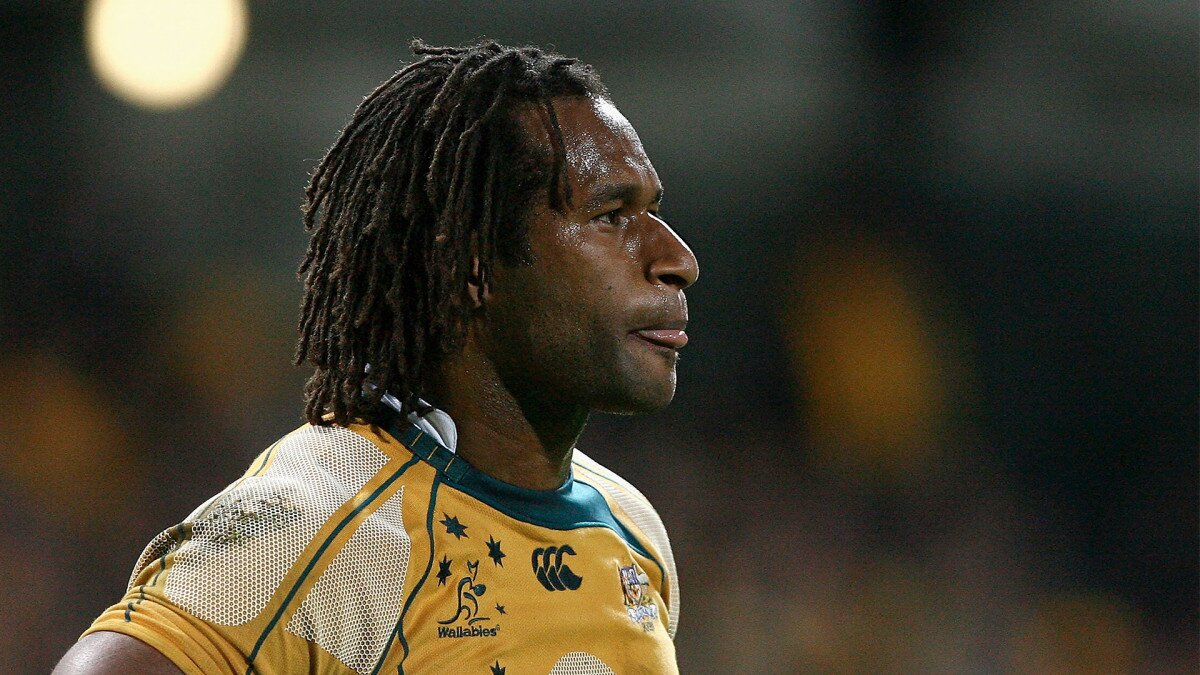 Lote Tuqiri in action for the Wallabies in 2008. (Photo by Paul Kane/Getty Images)

Tuqiri said that the only issue Tuivasa-Sheck will come up against in union is the depth of talent New Zealand Rugby has at its disposal.

A fullback in league, it’s likely Tuivasa-Sheck will play in the outside backs when he transitions back to union, the sport he played for the Blues and New Zealand at schoolboy level a decade ago.

Beauden Barrett, Jordie Barrett, Will Jordan, Damian McKenzie, Caleb Clarke, Sevu Reece, George Bridge and David Havili are all competing for places in the All Blacks’ back three, leaving Tuivasa-Sheck with a significant challenge to work his way into the national set-up.

“The thing is in New Zealand he is up against it with a lot of talent over there. But he is going over at the peak of his powers, really. He’s 27, you’re probably just hitting your straps around this time in your career. He is the perfect candidate,” Tuqiri told Fox Sports.

“The only problem he will face, really, is the opposition he will face [for an All Blacks jersey].

“They’ve got freak athletes in the outside backs over there, but he has played rugby union as a youngster. I wouldn’t think he would have too many problems.”

Whether Tuivasa-Sheck succeeds in his bid to make the All Blacks in the coming years, Tuqiri offered him a piece of advice to help make his move easier.

“I would just tell him to run the ball, get the ball and run and then people work in and around you after that,” he said.

“It’s your train of thought really, because you’ve played one game for so long.

“The one thing for him will be recycling the ball when he gets tackled, getting that back rather than thinking of getting up and playing the ball.

“Body height is a massive thing, going into contact because you are a lot lower in rugby. When you’re in close quarters you can’t afford to have your body height too high, especially in the higher levels you play because you’ll have the ball ripped off you.”

If reports that Roger Tuivasa-Sheck is on his way to rugby union with an eye on an All Blacks jersey are to be believed, the implications of such a move would be significant in the fifteen-man code.https://t.co/EtxGOzfhak

'Get the ball and run': Australian dual-code great's advice to Roger Tuivasa-Sheck ahead move to union