Wallabies anthem success Next
Back
The Rugby Championship

Indigenous NRL star Latrell Mitchell has hit out after history was made at Saturday night’s Wallabies Test when the national anthem was sung in two languages for the first time in Australian sport.

Before the Aussies’ Rugby Championship clash against Argentina, which ended in a 16-all draw, a spine-tingling rendition of Advance Australia Fair was performed both in English and in the Eora language.

Olivia Fox, a young singer from the Newtown High School of the Performing Arts, belted out the stirring rendition of the anthem as many rugby fans praised the unique acknowledgement of Australia’s Indigenous people.

However, Mitchell wasn’t among them.

“When will people understand that changing it to language doesn’t change the meaning!” he posted on Instagram with a face-palm emoji.

“Be proud but understand what you’re being proud of.

“I stand for us, our mob! Be proud of the oldest living culture.

“Always was, always will be.” 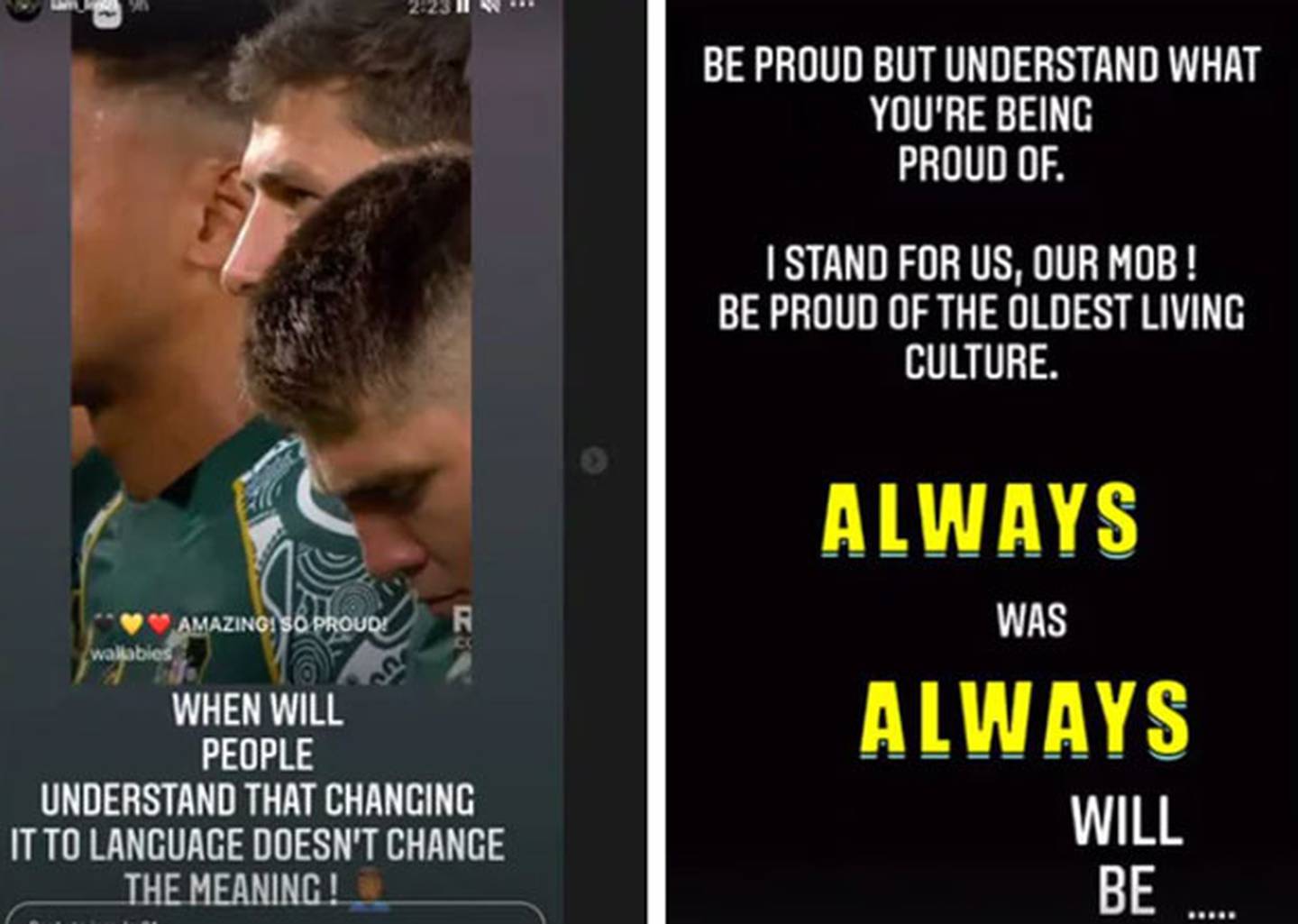 Mitchell is a proud Indigenous man and appeared in this year’s NRL marketing campaign with the Aboriginal flag draped across his back.

During last year’s State of Origin series, the NSW centre made headlines when he protested against the anthem by refusing to sing, as did Blues teammates Cody Walker, Josh Addo-Carr and Blake Ferguson.

Mitchell didn’t play in this year’s Origin series but the anthem protests from players continued.

The South Sydney fullback may not have loved the national anthem on Saturday night but plenty of others did.

The Daily Telegraph’s Jamie Pandaram posted on Twitter: “Absolutely fantastic: every Wallabies player sung the first half of the national anthem in Indigenous language. Learned the words. Paid respect. A great step forward.”

Coach Dave Rennie and captain Michael Hooper reflect on the Wallabies’ 16-all draw with the Pumas in Sydney.

“The finest rendition of the Australian national anthem. That was brilliant. Never felt more proud of our anthem. Well done Olivia Fox,” he posted on Twitter.

The Wallabies players had been practising the Eora version of the anthem all week, with the end result proving to be a landmark moment in Australian sporting history. #TriNations #AUSvARGhttps://t.co/s27OsY25Ne

The Wallabies’ official Twitter profile called it a “goosebumps” moment while Australian Paralympic legend Richard Coleman wrote: “That is one incredible national anthem @wallabies! As an athlete every time the Australian anthem is performed it should be done this way. I would love to win a gold medal and hear this playing loud and proud, so inspiring.”

It was reported this week the Wallabies playing group had been learning the lyrics in Eora to show the team is serious about recognising the role of First Nations people in the sport.