ASX Sports Fantasy Rugby: Who to buy for Super Saturday

After six weeks and twelve matches, the 2022 Guinness Six Nations comes down to one final day. Three matches and four chances to win in ASX Sports fantasy rugby.

France are aiming for the Grand Slam in the final match of the day against England, but with Wales hosting Italy and Ireland facing Scotland before then, there a plenty of opportunities to win great prizes in the single and multi-game contests.

So we are looking at who are the best picks ahead of this weekend:

Team of the Week
Before looking at this weekend, we’ll look back at round four and see who were the best performers. Throughout the Championship, the team facing Italy tends to dominate the team of the week, and Scotland have not bucked the trend. 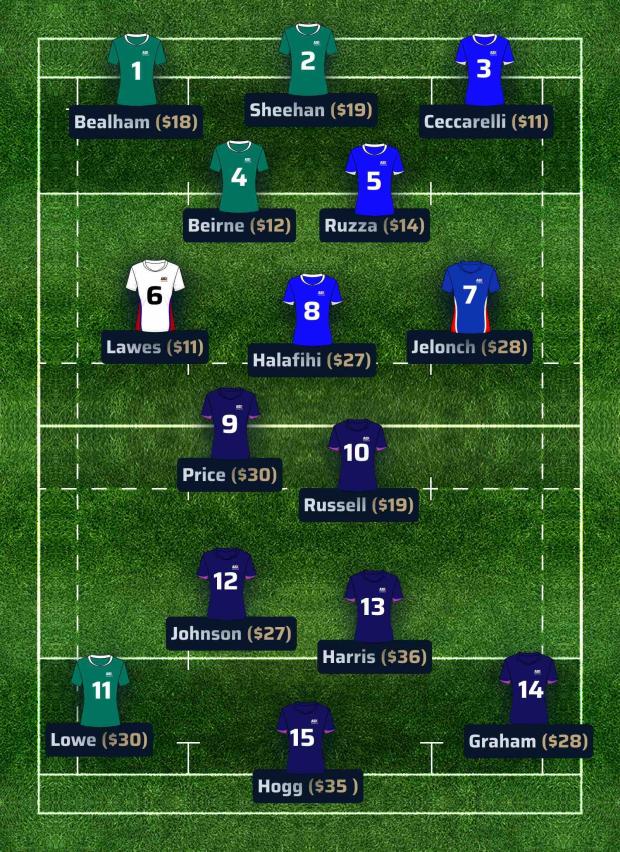 Wales versus Italy
As has been the theme throughout this Championship, loading up on backs against Italy is a must, as they have been handing out tries to outside backs like they were sweets. The fact that all but one member of the Scottish backline made the team of the week is fairly compelling evidence of this.

Wingers and fullbacks had scored the bulk of the tries against the Azzurri leading up to the Scotland game, but centres Sam Johnson and Chris Harris got three tries between them in Rome on Saturday, meaning it is wise to invest in any Welsh players outside the fly-half. Josh Adams is maybe the most reliable source of dividends, but does come at a price. At fullback, Johnny McNicholl could be a cheaper way to buy a Welsh back three outside of the pricey Adams and Lous Rees-Zammit. Similarly, outside centre Owen Watkins is another cheap option to invest heavily given his performances throughout the Championship.

Following his performance against Scotland, Italy No.8 Toa Halafihi is a relatively cheap option that could be worth investing in. He was the fifth highest scorer in his match, helped by three turnovers and a number of carries.

Ireland versus Scotland
A player that should be at the top of most people’s list from Ireland (should he play) is hooker Dan Sheehan. The No2 was the second highest scorer of the match against England despite not scoring a try, and made the team of the week. It was his ball carrying that generated so many dividends, with a line break and offload alongside a number of passes. He is not exactly a cheap option, but is still worth investing in. Another pricey option is Tadhg Beirne, but the lock has proven to be a consistent source of dividends throughout the Championship due to his high number of turnovers and Ireland’s solid lineout.

Scotland’s man of the match against Italy, scrum-half Ali Price, looked very sharp in Rome, and with line breaks being a great way to earn dividends, a scrum-half like him could be a handy investment.

France versus England
Though it was not vintage France against Wales on Friday, with a forward, Anthony Jelonch, scoring their only try of the match, it is still smart to own some French backs, particularly as they are playing at the Stade de France. Damian Penaud is always a good choice, but centre Jonathan Danty has proven all Championship that he can earn dividends in a variety of ways, particularly with turnovers. In the pack, Anthony Jelonch put in another great team of the week performance, scoring his second try of the tournament. Hooker Peato Mauvaka also was the third highest scorer against Wales despite only coming on in the second half, so could be worth buying when he comes on.

From England, Marcus Smith is their only player that has been reliable all Championship in terms of picking up dividends, and is the tournament’s leading points scorer this year. Joe Marchant was England’s highest scorer against Ireland, but their backs (excluding Smith) still are a no-go zone given their lack of tries. In the pack, Maro Itoje could be a good choice after his Herculean defensive effort against Ireland, one that he will need to be repeated against Les Bleus.

ASX – the world’s 1st fantasy rugby game with live in-game trading – Are you playing yet? Download Now on Android or Apple!

Now play Multi-Game Contests – where one game rolls into the next and you can go from strength to strength – trade players at the end of one game for players in the next and dominate the entire round!