Analysis: The one passage of play that sums up the difference between the All Blacks and Wallabies

Another year, another lost Bledisloe campaign.

The Wallabies continue to look for answers after a 40-13 drubbing at the hands of the All Blacks at Eden Park last night. The problems were varied, although the lineout and scrum was far better this time around. They were killed on turnover ball once again, as the All Blacks ran wild in transition phases.

While many are quick to jump and defend Michael Cheika and his coaching staff, there are visible and clear issues with their attacking play that proves to be ineffective.

The Wallabies run complex pre-set attacking waves from set-piece that can last up to five phases or more – it looks fancy but ends up doing next to nothing. There is a lot of pre-planned player movement, but a lack of substance makes it very easy to defend.

The automated, rigid nature of the telegraphed plays they run don’t challenge the defence and the passing is too deep to deceive anyone – as soon as one player throws the ball back deep to the next, the defence can just slide and swallow up the runner, often behind the gain line.

Pressure never builds enough to break down the defence, and inversely it’s the Wallabies who lose any semblance of shape by running scripted play after play without getting into a balanced pattern.

Nothing illustrates this better than the passage of play at a pivotal moment, right before halftime from a Wallabies attacking lineout.

On the first play, they run Dane Haylett-Petty on a cut after a screen pass from Bernard Foley to Kurtley Beale. The first thing to process is the depth the players receive the ball from. Beale feeds Haylett-Petty underneath without challenging any All Blacks defenders. Reece Hodge, who ran a dummy line, hasn’t reached the defensive line yet which begs the question, what was the point of his angle and line? No defenders are drawn into contact. He hasn’t created any indecision at all, and might as well have stood still on the play to conserve energy.

Beale releases the ball back inside, still metres from the defensive line and all the All Blacks have to to do is make a front-on tackle on Haylett-Petty. The Wallabies progress through the move with unnecessary complexity when a simple midfield crash would yield the same result.

The next phase sees the first forward runners coming around the corner. Adam Coleman is coming from a depth of nearly 8.5 metres to take a carry, whilst Foley, Beale and Michael Hooper wait even deeper for a scripted third phase play. Lukhan Tui stands alone on the wing on the far side, with half a field between him and the next player. If Coleman spills the ball in contact, the All Blacks could theoretically move the ball left to attack this space and catch the Wallabies struggling to cover.

Just on that picture alone, you can see why the All Blacks are scoring a ton of points from turnover ball against them. These elaborate pre-planned plays after multiple phases offer vast areas of space to attack. On the next phase Will Genia picks up the ball and has a short runner in close with Alaalatoa (3), but his backdoor option Foley is extremely deep. He is at least 10 metres away from the defensive line.

The defender has enough time to cover Alaalatoa, realise he’s not getting the ball and then slide back to cover Foley out the back. It’s really easy pickings.

Genia’s pass has to be deep to reach Foley, and the All Blacks defence will have plenty of time to process his inside runners, Beale and Hooper. Space is actually developing on the edge, but the Wallabies go through the motions of their multi-phase set play and Foley tries to attack the line. 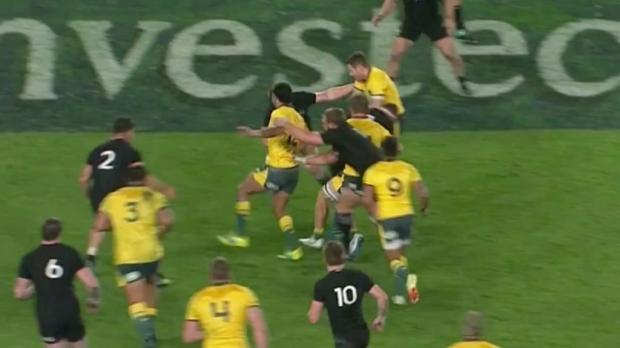 Recieiving from such depth, Foley is an easy target and is hammered by Sam Cane as Hooper and Beale end up in a tangled mess. He retains possession and the Wallabies move to the edge with Tui to start a new pattern.

The same issues persist in every play – the depth of passing and the failure to challenge the All Blacks defence with legitimate running options. The final runner has the ball so early the Wallabies have done the All Blacks’ work for them – they don’t even need to read what player to tackle.

This has either been instructed by coaches, been failed to be identified by coaches as a problem, or it has been talked about and the players are unable to correct it. It is likely to be one of the first two reasons because when players don’t do what the coaches tell them, they usually get replaced by someone who does. In the same possession but a few phases later, Foley again runs a scripted inside ball to Hodge, releasing the pass without committing a defender. He is going through the motions of the planned play and doesn’t even think to fire a long ball out to the unmarked Marika Koroibete, where the space is.

After eight phases, the Wallabies have made good metres but have mustered a whole lot of nothing, tiring themselves out with ridiculous running from deep. On the next phase, Beale coughs the ball up and this happens one phase later.

Simple draw and pass skills and moving the ball to the space. It’s a planned strategy to attack off turnover ball, but more of a framework to operate within. The players can play what’s in front of them and make their own decisions.

The Wallabies tire themselves out with unnecessary, poorly designed play, turn the ball over and the All Blacks beat them with simple skills (draw and pass) and principles (attack space).