FOR SUPER RUGBY
You need to log in at:
liverugby.net
Go to liverugby.net
ADVERTISEMENT
Back
The Rugby Championship

Playing with 14-men for 40-minutes was never going to be easy but it was Wallaby halfback Nic White that put the foot to the throat so to speak, orchestrating the Australian attack to hit the All Blacks where it would hurt.

White’s sniping, switching and high-tempo recycling wore down the All Blacks interior defenders and laid the platform for the Wallabies to get a roll on which they used to score 31 second-half points in the record-equaling win.

Compounding the problem for the All Blacks is White’s work was all done where Scott Barrett usually defends. 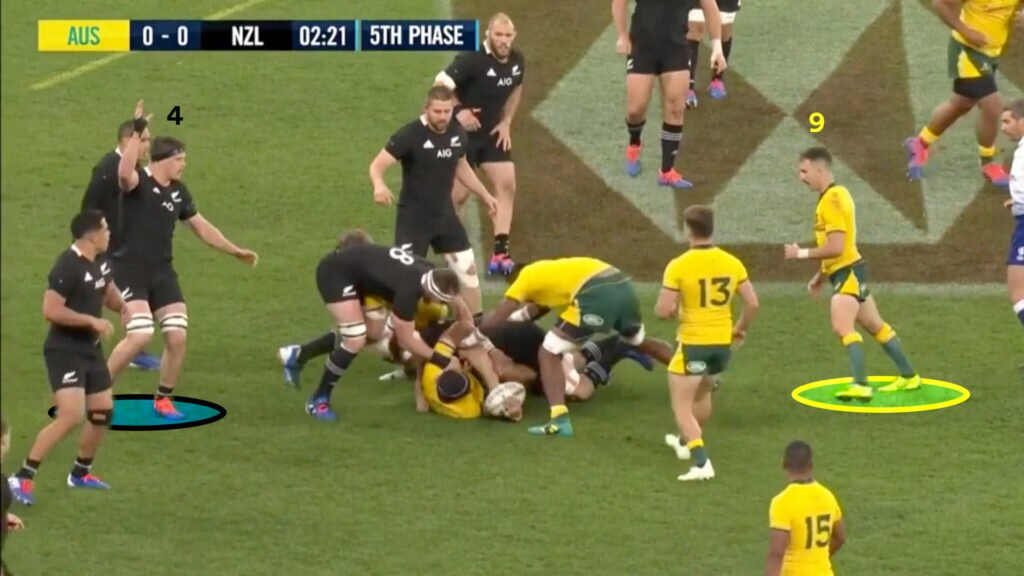 Barrett is generally always in-and-around the ball as one of the more athletic tight five forwards in the pack. He has a big engine, a high work rate and makes a lot of tackles in close. He often becomes a ‘pillar’ defender in close ruck channels after contesting or making a tackle.

Early in the game, Barrett showed intent to get to the halfback and put some pressure on the pass, hitting Nic White off-the-ball numerous times. 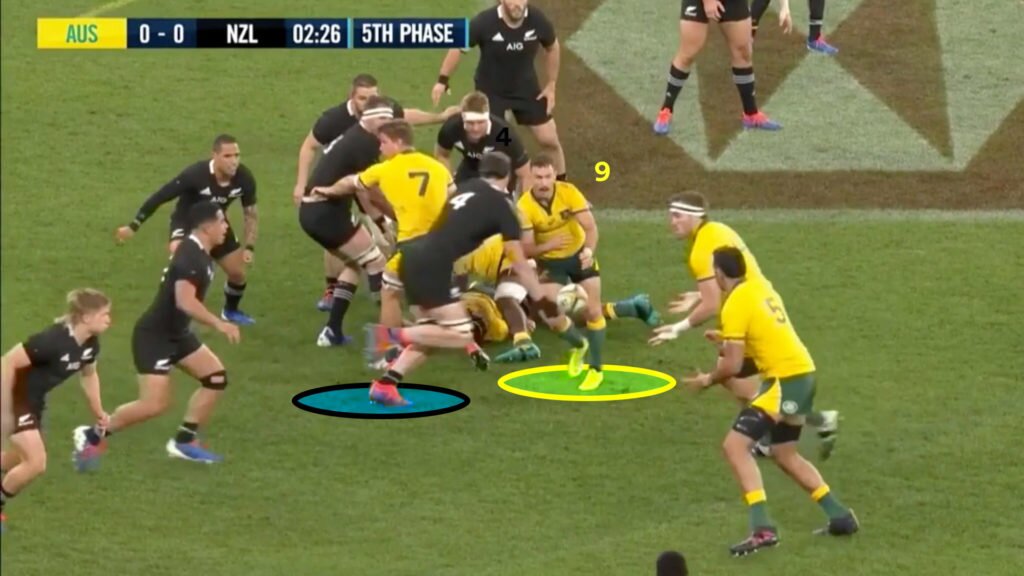 Even on the next phase, Barrett is already stalking the ruck as a pillar defender having tracked the ball across. 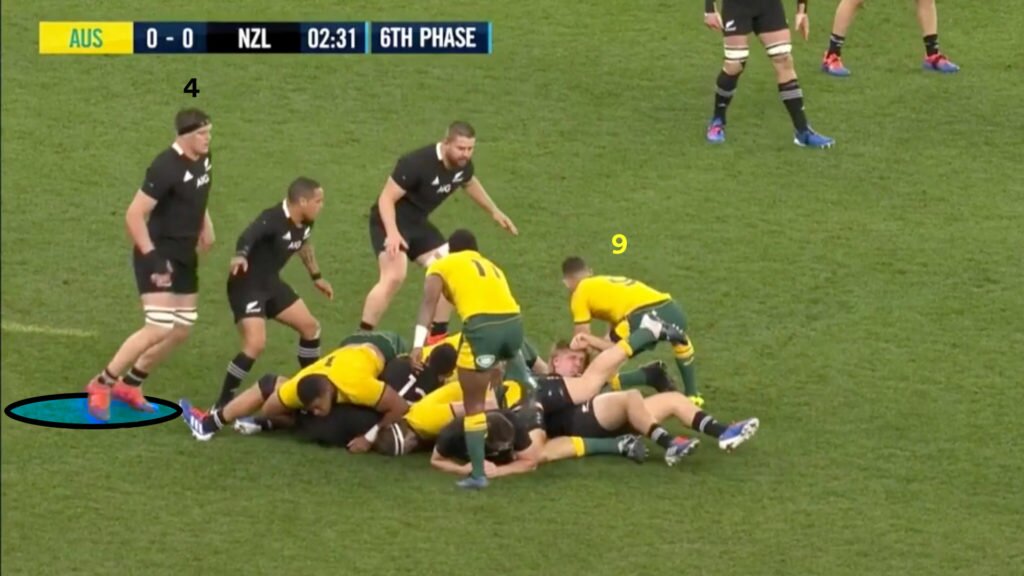 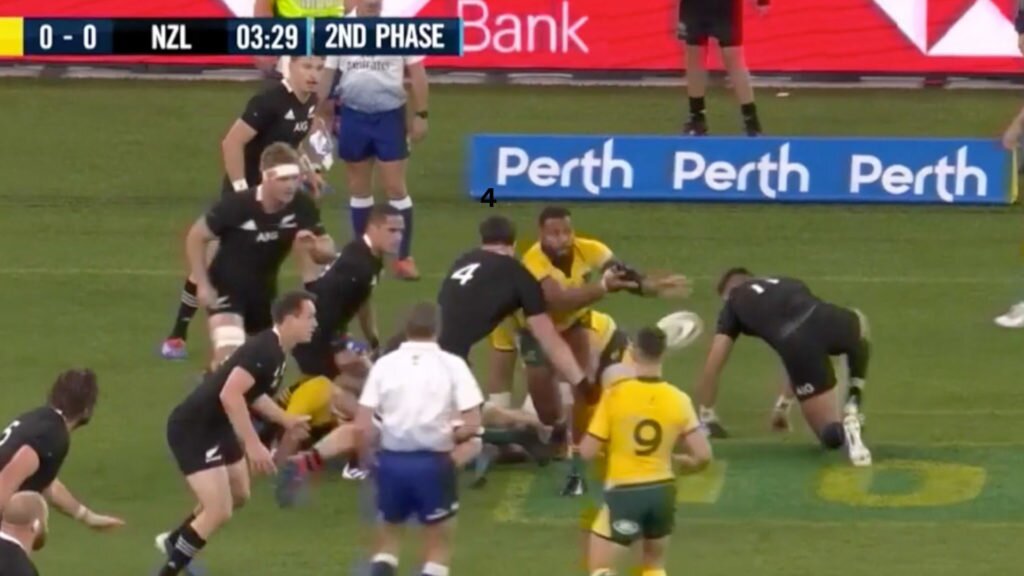 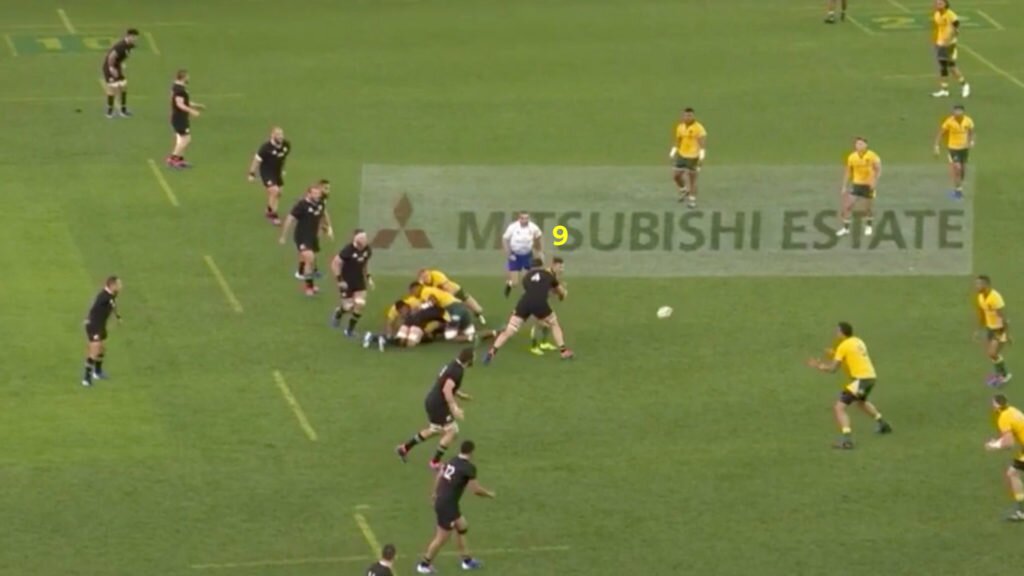 With a full complement of forwards and some extra pressure from Barrett, the All Blacks kept White relatively in check in the first half.

However, there were some communication breakdowns early, which White was able to target with perfect timing and accurate decision-making around when to run. 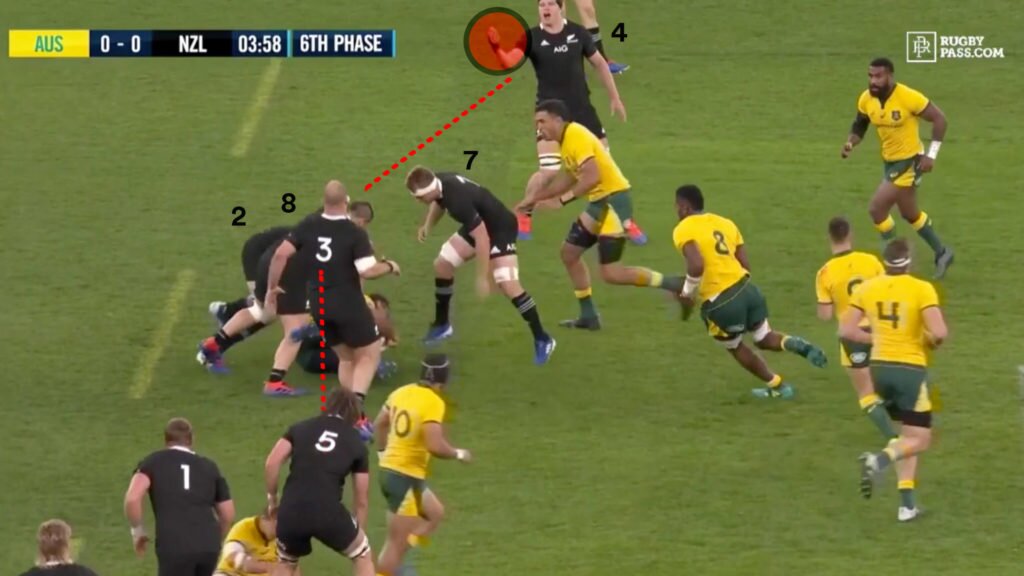 Here a Wallabies runner makes a decent carry and is attacked by two forwards over the ball, Dane Coles (2) and Kieran Read (8). Scott Barrett (4) is calling early for more support to fold around the corner to assist on the next phase. 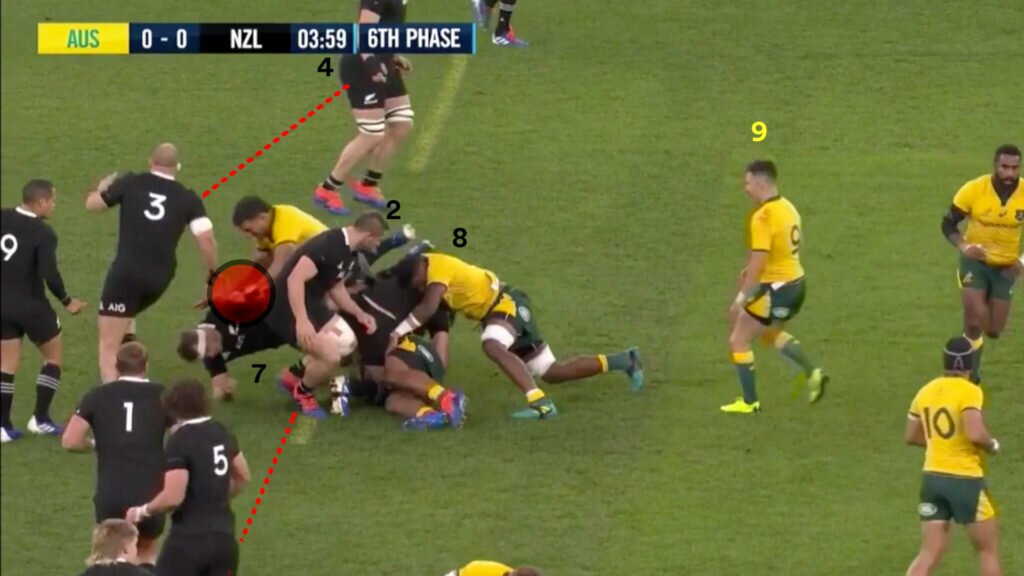 Sam Cane (7) is cleaned out by Rory Arnold despite not really being involved in the ruck, taking him to the ground and out of the picture – a smart play by Arnold.

As Nic White (9) approaches the ruck, Owen Franks (3) is in motion to push across with large gaps on either side presenting to the Wallabies halfback. 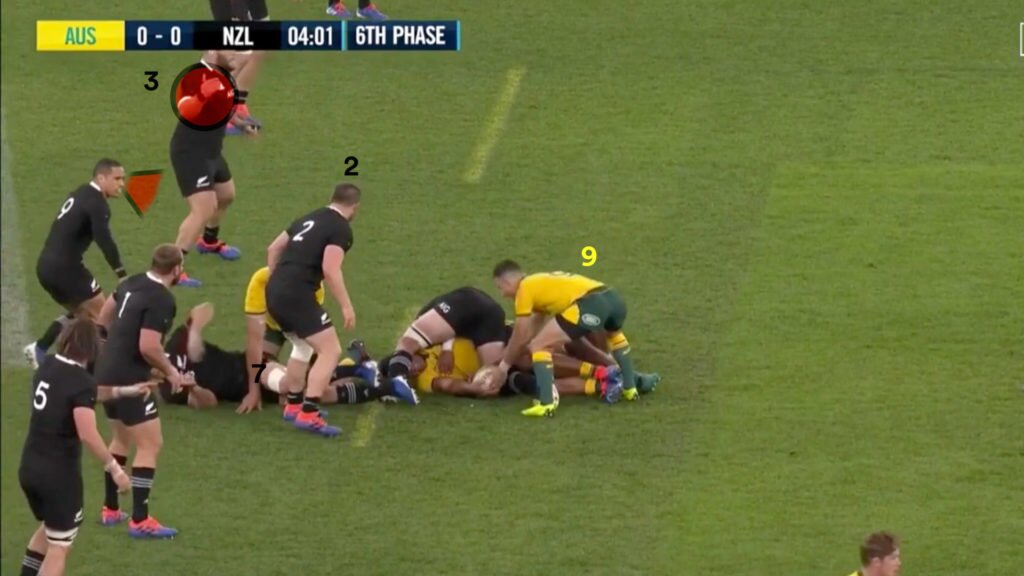 Franks continues to push out and signals for another defender to fill the space, however, no one else is watching.

White bounces out to attack the space on the right and steps both Smith and Coles drifting across in cover, making a nice gain downfield. He knew just when to keep the All Blacks honest, sniping around the rucks or finding runners once defenders were interested.

It didn’t result in major returns in the first half but when Scott Barrett was red-carded on the stroke of halftime, the Wallabies had the perfect chance to unleash White. With the All Blacks down one of their key interior big men, his influence began to grow as the other forwards were forced to work harder in Barrett’s absence.

The tempo began to tire out the All Blacks as the Wallabies played long strings of phases, many played flat off 9 or though the ‘A’ channel by the ruck via White himself or pick-and-go’s. The threat of White was constant and began reaping rewards early after the break.

Deep on attack into the 10th phase, White sees Sam Whitelock (5) retreating from a missed tackle and immediately targets him, switching back to the short side. 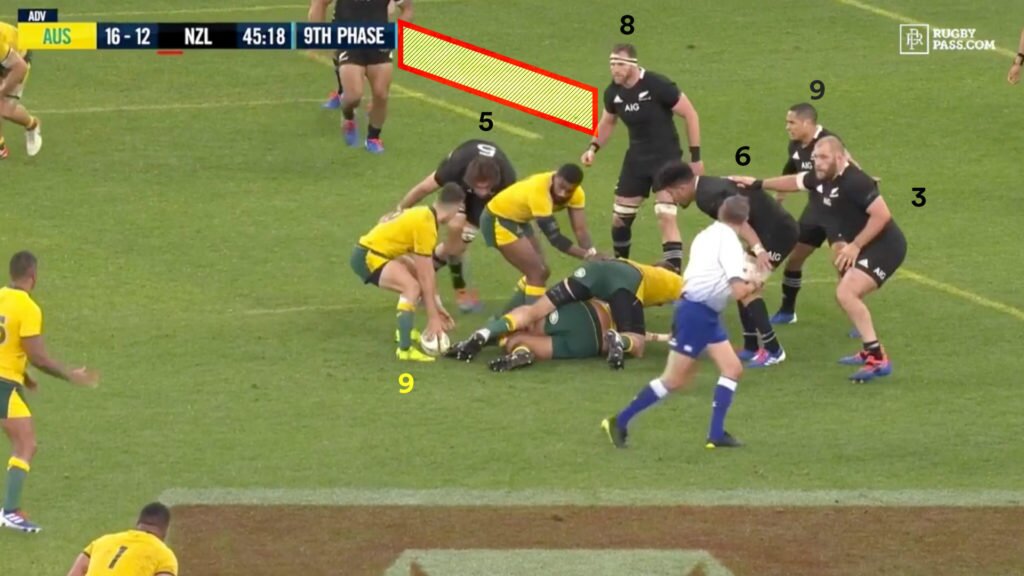 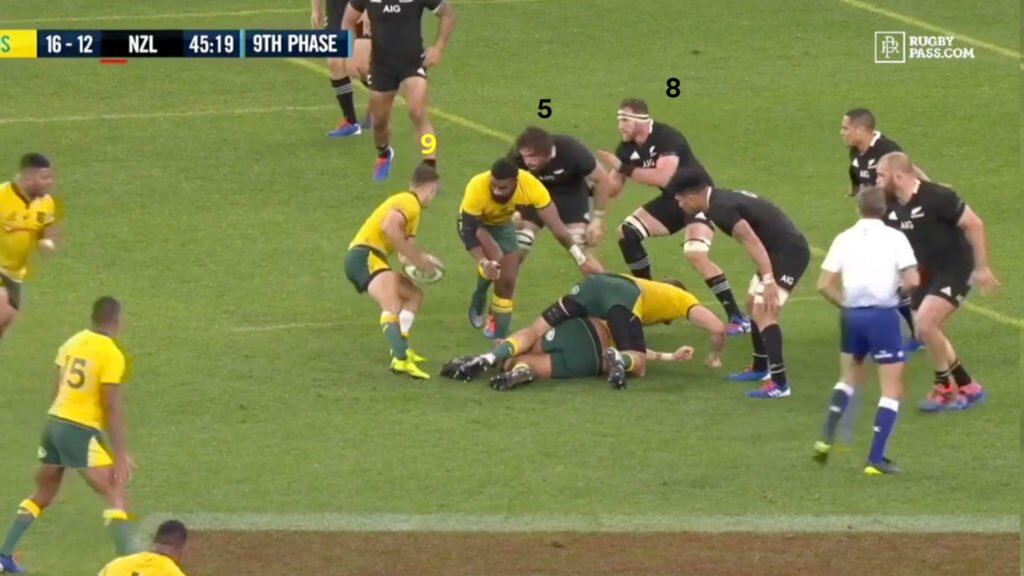 Kieran Read (8) has to go around his own player, allowing White to bounce out past the first two defenders creating a three-on-two. 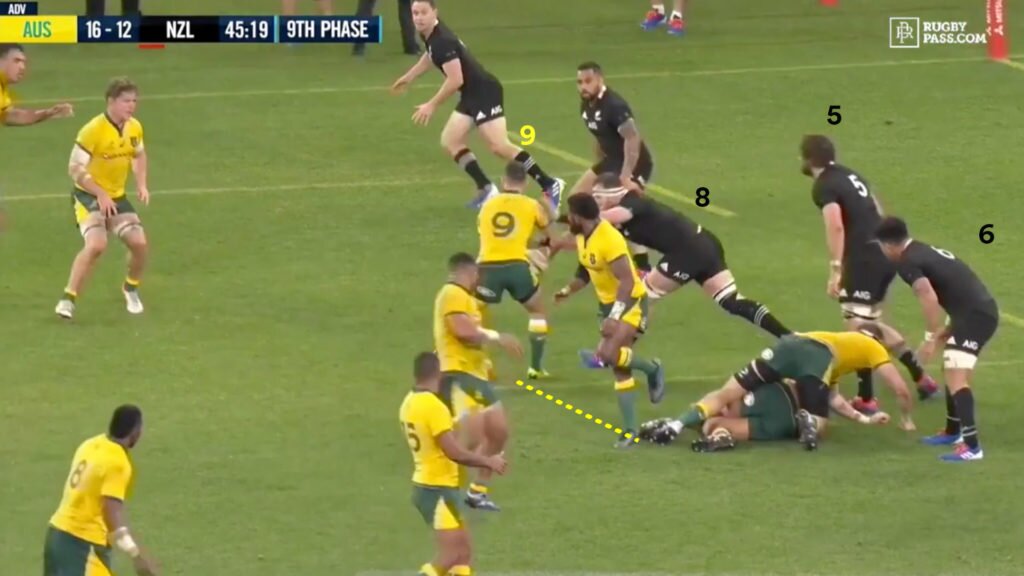 A fortuitous juggle from White’s pass to Rory Arnold ends with a walk-over try to Lukhan Salakaia-Loto, capitalizing on some smart work from White and patient lead-up work from the whole team.

On their first possession, they built 14 phases before being held up over the line then built another 10 phases for the try with White conducting most of the proceedings and having an influential hand in the finish.

A trademark of this win was the Wallabies intent to run the ball, kicking to exit just once in the first half. Now with a 9-point lead up 21-12, they ramped up the speed immediately from the kick-off receipt, running five phases to the left to strike twice in a row. 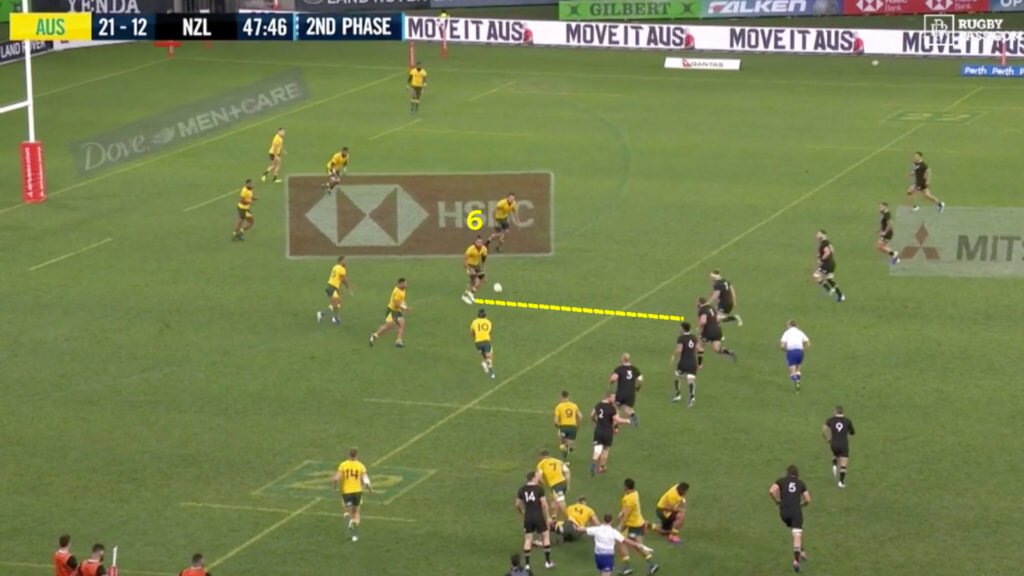 After a Salakaia-Loto midfield carry on first phase, the Wallabies pick-and-go on second phase before Lealiifano carries on the third phase.

Key to this is how Aaron Smith (9), the sweeper, is called upon to make a tackle. 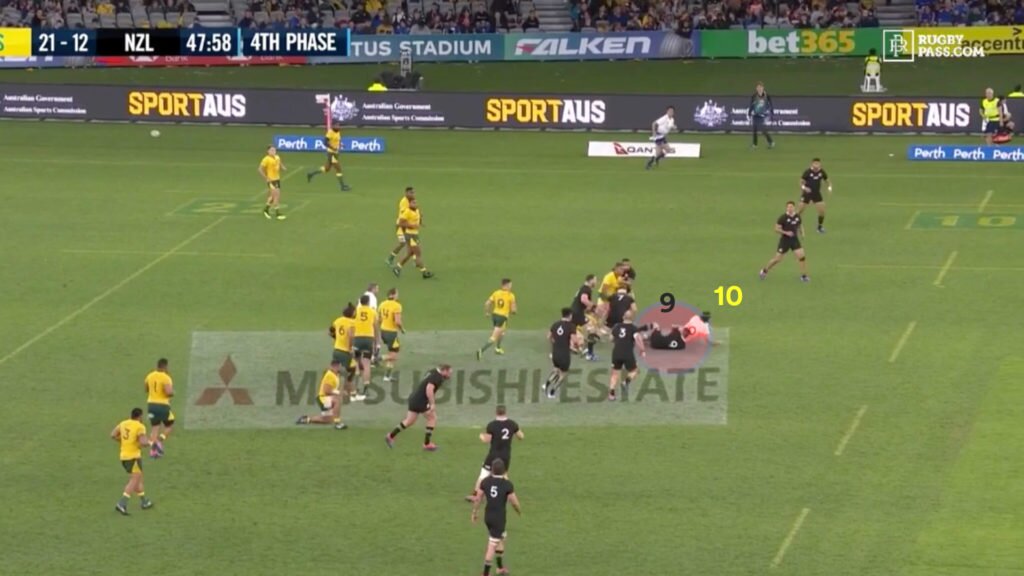 With one key ruck defender in Barrett red-carded, taking Smith out further weakens the All Blacks’ organisation around the breakdown which would be a factor two phases later.

The All Blacks begin to bend backward at a rapid rate, thinning the far side numbers. The pack has even more pressure to fold, having to go the long way around the ruck but White is already there pressing to deliver the pass. 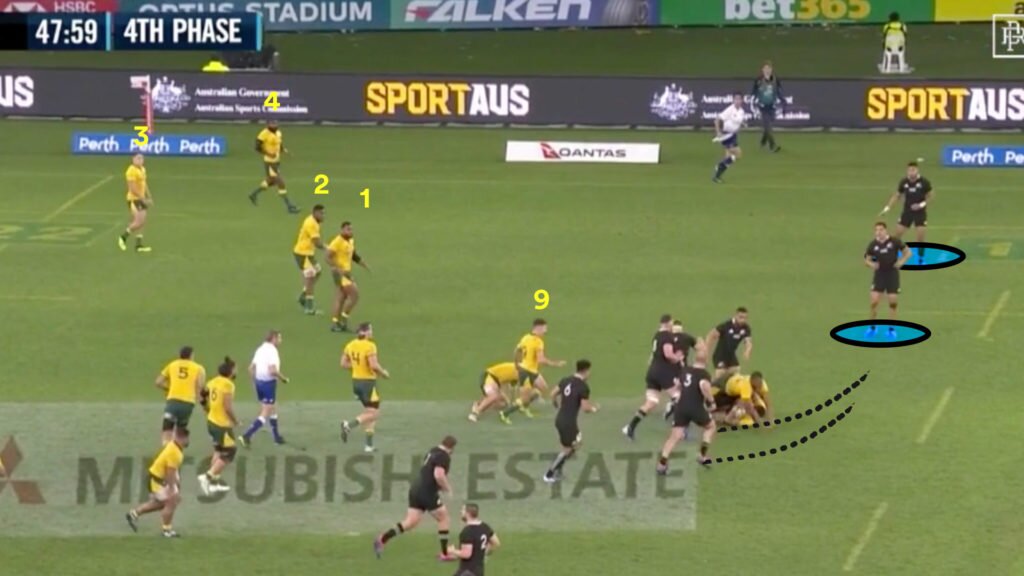 White’s rapid recycle has the ball on the move before that can happen, and the Wallabies have a 4-on-2 overlap with easy metres at hand as the defence goes into jockey-mode to recover the situation. 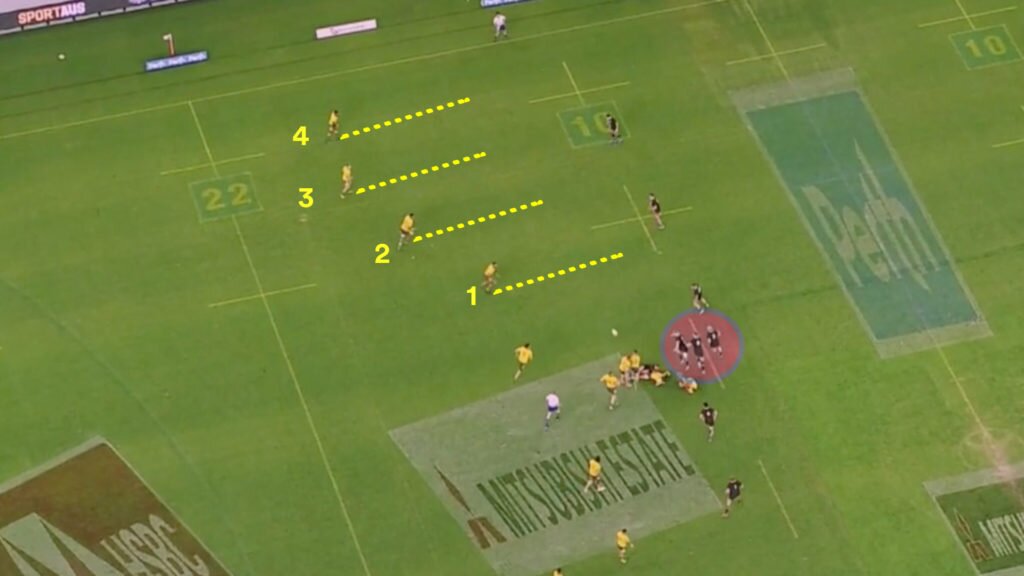 The All Blacks close it down on halfway but a heads-up pick-and-go by Marika Koroibete exposes the defence where it’s short down a skinny corridor.

With the sweeper Aaron Smith still trying to get onside and back behind the defensive line, Koroibete looks up to see an open path ahead. Taking a quick pick and go, he draws Ioane in and the Wallabies break down the left edge with Kerevi before White scores backing up on the inside. 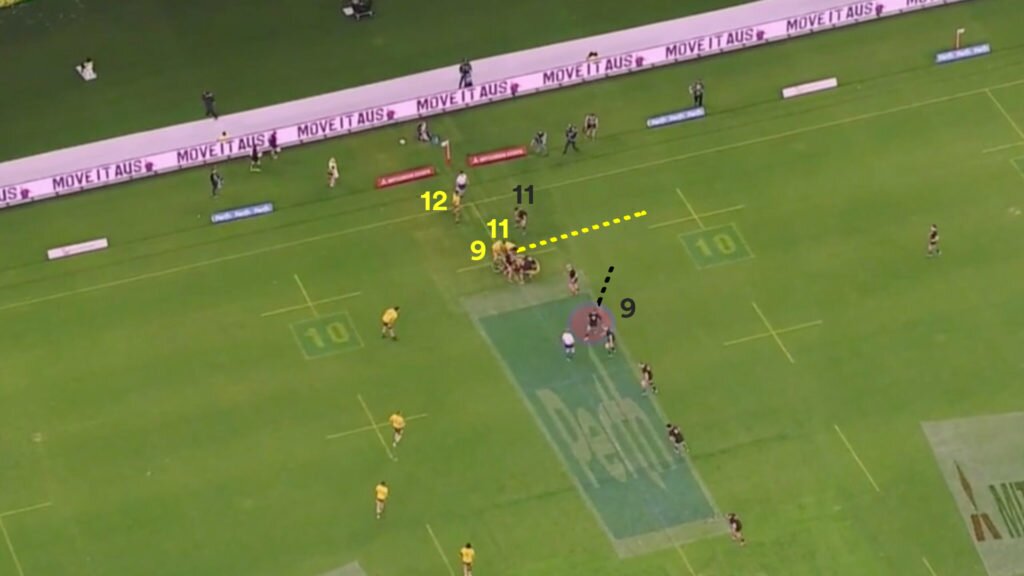 Building momentum over five phases weakened the defence and opened up a small window to attack straight through the ruck, a common theme with most of Australia’s phase play. The pick-and-go was used frequently to keep moving forward and prevent negative gain line plays.

The Wallabies showed no intention to let up and kick the All Blacks the ball, while White’s switching began to really mess with the defence. He was able to start running switches with regularity, bouncing out past multiple defenders at a time and create multiple overlaps out wide. 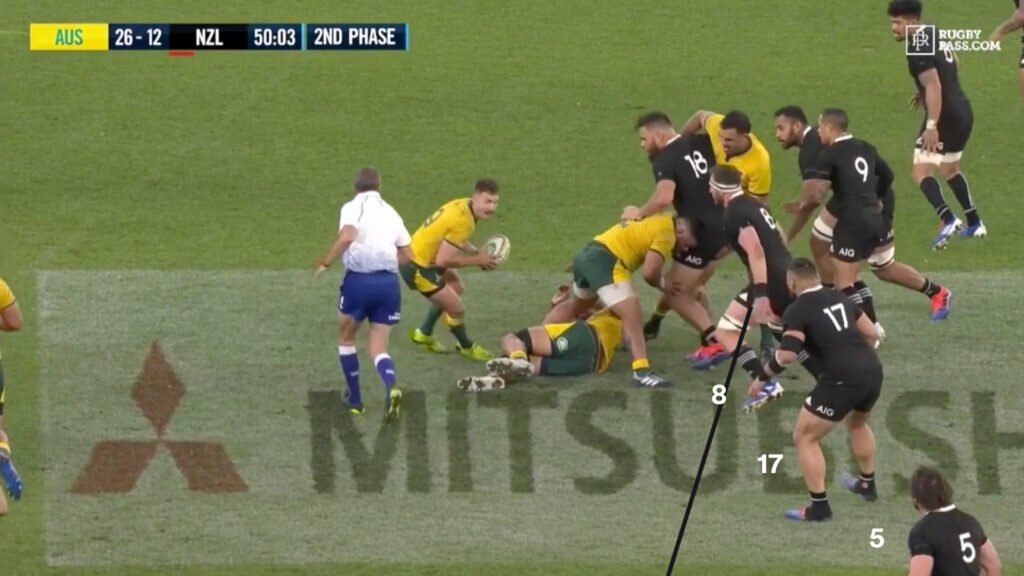 In one scoot, White takes three defenders out of play, Kieran Read (8), Atu Moli (17) and Sam Whitelock (5), giving the Wallabies a chance on the right side. 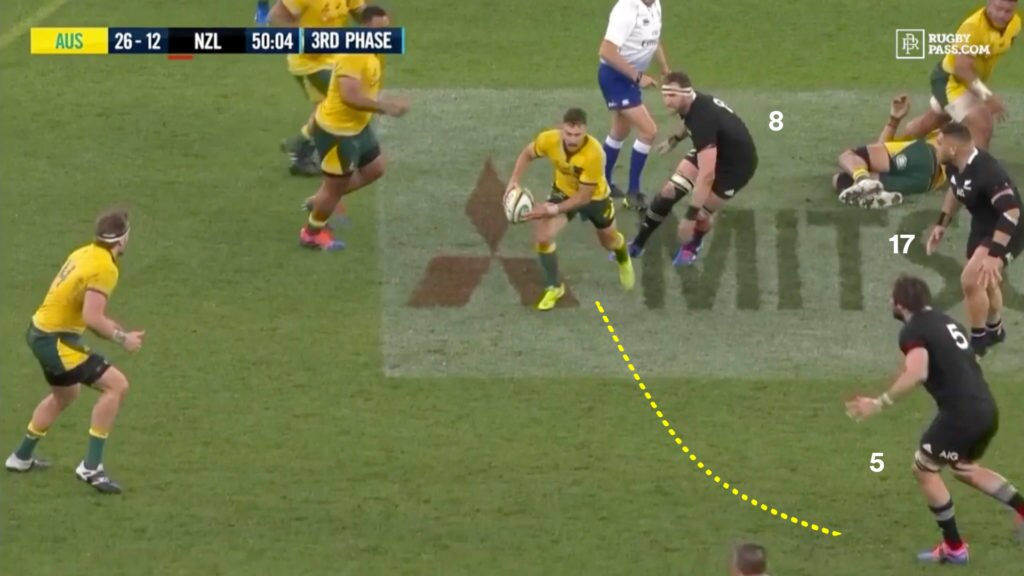 Targeting retreating defenders and tired tight forwards, White continued to pick the right option, often baiting the All Blacks one way and going the other. 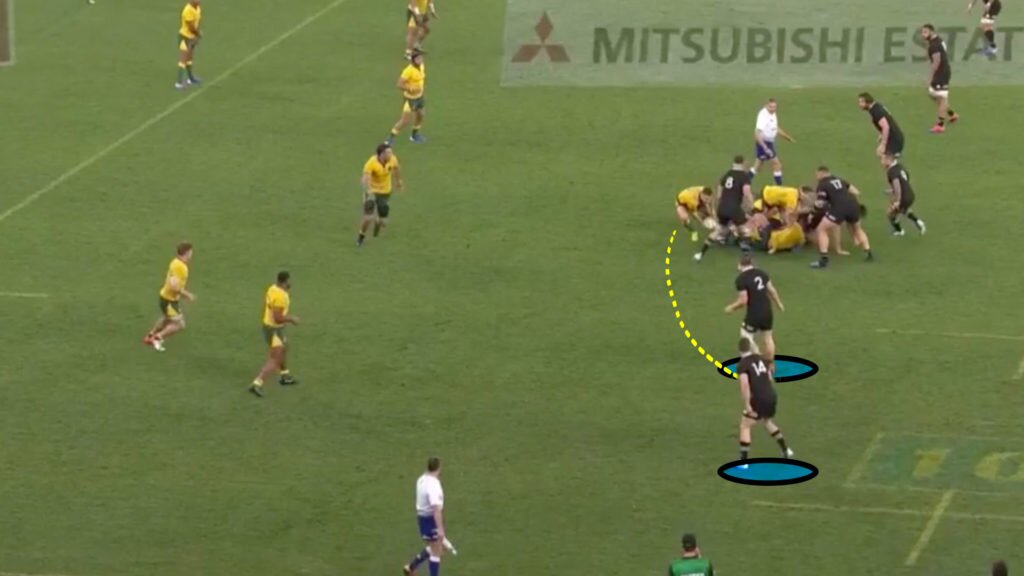 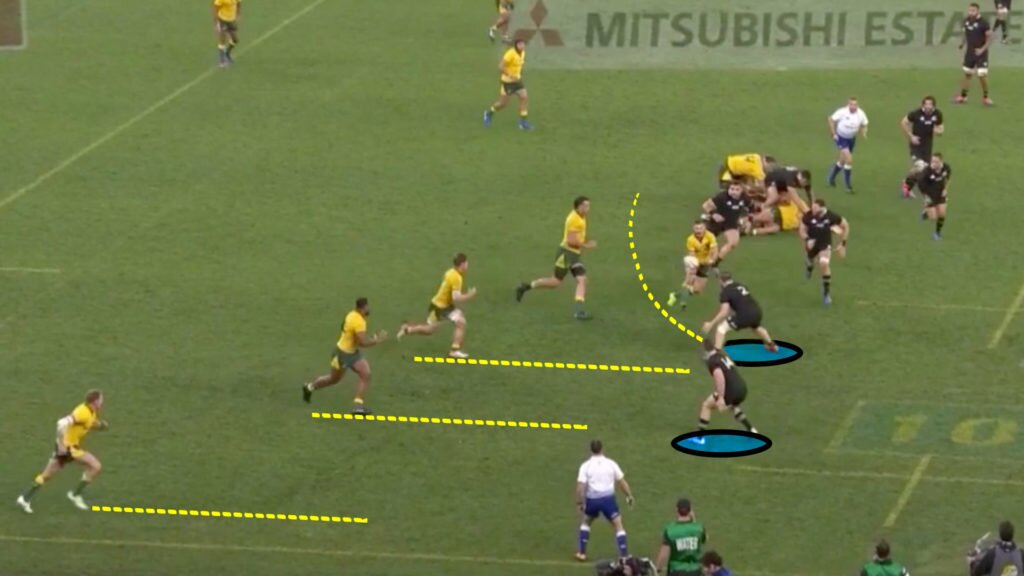 On this occasion, he gets past two defenders to reach Dane Coles (2) and create a 4-on-2.

The pass is delivered a touch early allowing Coles to slide and the All Blacks recover from a disadvantageous position but the danger White offers was everpresent.

In the lead-up to the third try we see the subtleties used by White to throw the defence off. A scan to the blind side puts the defence on alert that way, before picking up and taxiing off to the right. 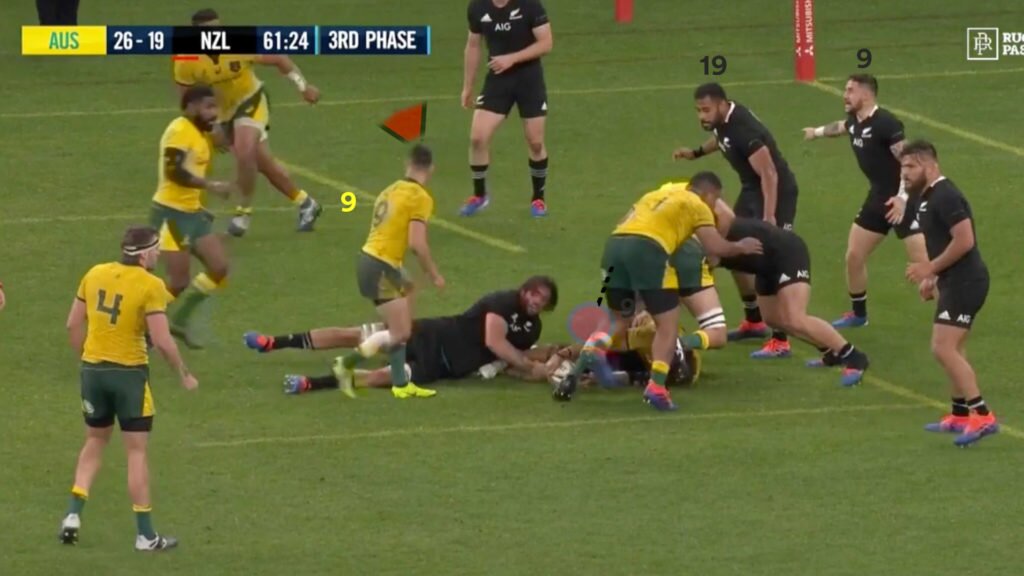 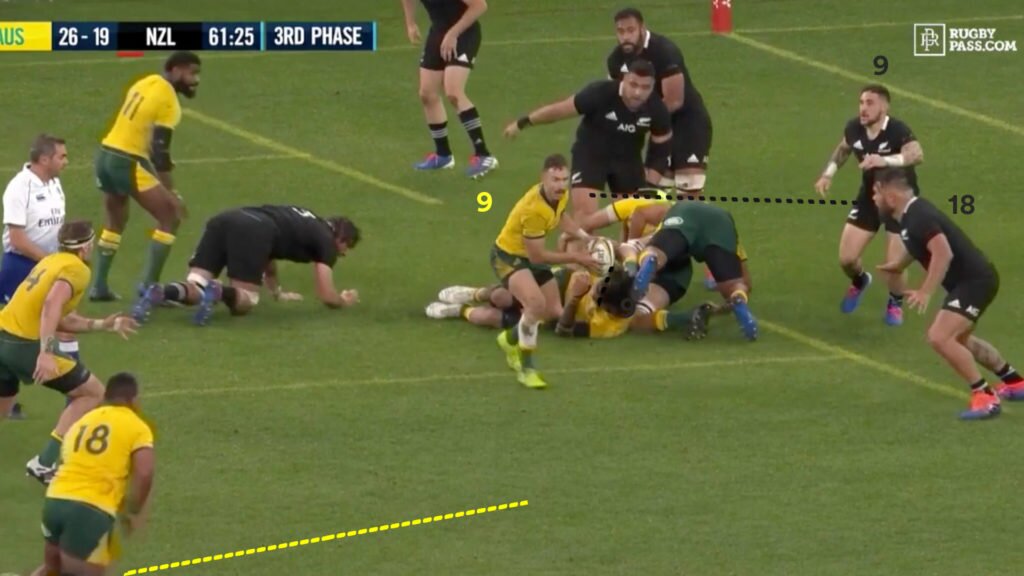 White has the attention of Angus Ta’avao (18) and flirts with danger long enough for Tupou to wind up. He hits Tupou flat with a ball that allows his runner to find space outside Kieran Read (8) and get over the gain line. 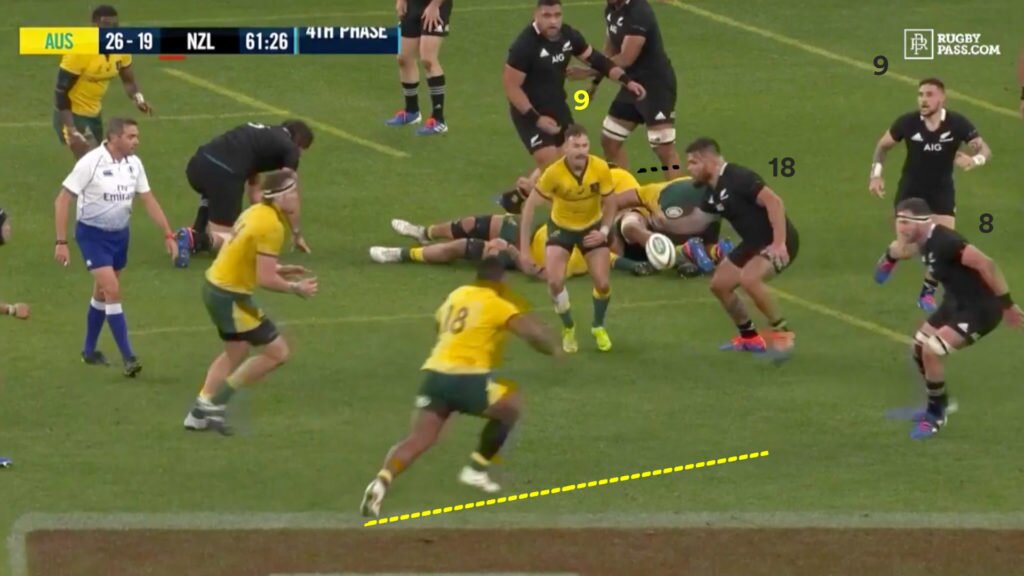 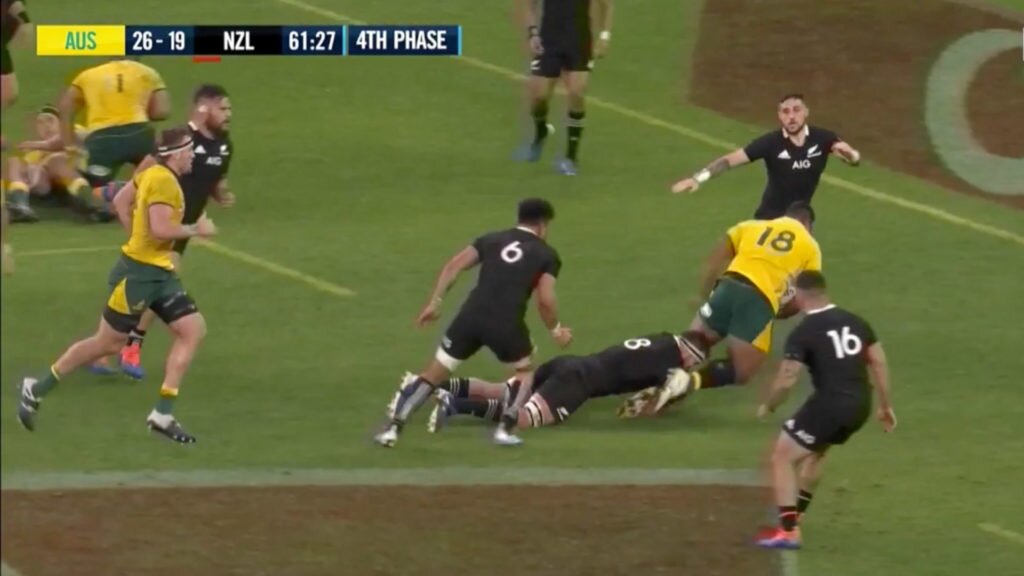 Two phases later Koroibete sneaks over from the ruck to extend the lead to 33-19.

The Wallabies have been guilty over the last two years of too much deep, lateral play which sees them often going backward and getting hammered behind the gain line.

A return to a more balanced attack using straighter running and flat options off the halfback delivered a dominant performance in Perth. Aided by near-flawless execution, the Wallabies controlled possession and the clock, pounding the All Blacks until the dam broke.

They received a numerical advantage after the red-card but tactically played to maximise it, allowing Nic White to control proceedings and run the All Blacks’ tight five off their feet. They put an immense load on the All Blacks defence that couldn’t be withstood, typified by White’s high-tempo presence.

The Exeter Chiefs’ halfback’s game was a masterclass showing for a playmaking nine, and he has to be one of the cornerstones of the Wallabies’ plans for a potential Bledisloe Cup turnaround and a successful World Cup campaign going forward.

Bill Ellis podcast – The All Blacks must bounce back at Eden Park:

O'Connor's selection stroke of masterclass Next