END_OF_DOCUMENT_TOKEN_TO_BE_REPLACED

There is certainly an Eddie master plan for the RWC, and it is quite likely to be a creative one. I expect that he has been working backwards to ensure that the team peaks at the tournament, and I further expect that he has been keeping some surprises to himself. What it is not clear is that the RFU presumably have some insight into the plan, which the rest of us don't, and that they would therefore be a little more tolerant of the current results. A coach with the highest win rate of any English national coach, with a great run in the last RWC, and with a record of thinking outside of the box and outwitting other coaches in big games, is a big asset. That he is one of the most experienced coaches out there, coaching at international level for 25 years, with coaching roles in three RWC finals (1999, 2007, 2019), is an irreplaceable strength. And the fact that he has a gigantic (and understandable) personal ambition to finally win the big prize, as head coach, in what may be his last real chance to do so, is a major benefit to the team. If it is true that they will ask him to move on then my assumption is that it is not a rugby decision, but an effort at self-preservation by the folks in the RFU. It is a high risk for their own careers to back Eddie at this point. The RWC expectations of a replacement coach would be much lower, and a less than stellar RWC campaign would not be too harmful to careers of RFC suits. Public pressure on Eddie seems to be leading to a lower reward outcome. FWIW I still think that an Eddie coached England would be a primary contender at the RWC. A last minute coaching change is unlikely to improve that, as there is not enough time to install new structures, culture, or player experience before the tournament, and whatever tricks are up Eddie's sleeve will remain up his sleeve.

While I only played prop for Bath 2nd XV because of Gareth Chilcott, Richard Lee, and Dave Sole, the amateur era at Bath was a great time. Sadly, as the article suggested, Bath were unable to make the transition to the professional era, and they continue to struggle today. I can only say there has been a string of questionable decisions re: coaches. It still amazes me to this day, how Leicester our rivals transitioned with great coaches and squads while Bath constantly chose the wrong mix of coaches e.g., the London Irish group - perenienal bottom of the league dwellers, and Bath bring in their coaching team of Toby Booth et al Its sad to see

Harlequins’ frustration at the absence of Marcus Smith for their derby against Saracens was compounded by throwing away a commanding lead in a 30-27 Gallagher Premiership defeat.

Quins had attempted to secure Smith’s early release from the 10-week stand down period imposed on England players involved in the July tour to Australia, but were refused by the variety of bodies that make the decision.

Facing them, however, were Owen Farrell, Maro Itoje, Billy Vunipola, Jamie George and Mako Vunipola – each of whom were in action against the Wallabies, highlighting the inconsistency of a policy designed to improve player welfare.

Quins’ sense of injustice found an early outlet as they surged 17-0 ahead but Saracens replied with four tries, including two from wing Max Malins, to set up a tense finish at Twickenham Stoop.

Saracens had a bye for last weekend’s opening round and, having blown away the cobwebs, they produced some brilliant moments before showing the composure needed to protect their slim lead at the death.

The rust showed early on as through a mixture of well executed play and opportunism, Quins had built a 14-point lead in the opening 10 minutes with Cadan Murley showing his pace to finish on both occasions.

The first came after a direct run by inside centre Lennox Anyanwu sucked in defenders to create an overlap and the second was the result of a turnover by Alex Dombrandt, who then fed the rampant Murley.

Tommy Allan landed a long-range penalty to accompany his earlier conversions but a setback came when tighthead prop Will Collier limped off and in the next play Saracens struck with their first meaningful attack. 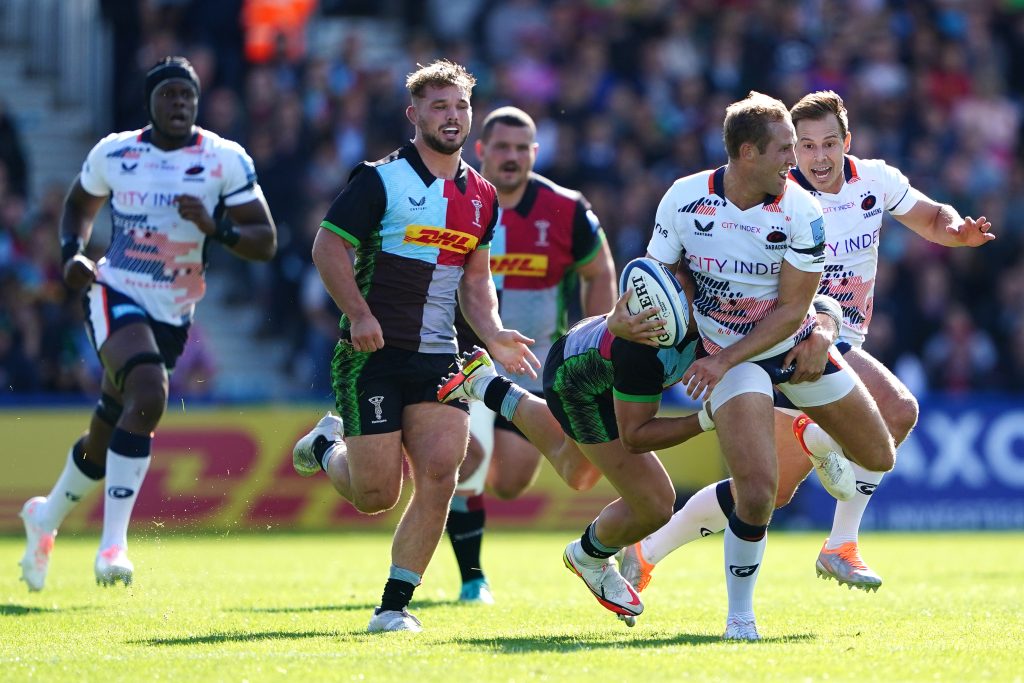 By keeping the ball alive, Farrell and then Billy Vunipola created a half-chance that was finished brilliantly when Nick Tompkins drew the last defender and sent Elliot Daly racing over.

Momentum continued to shift towards Saracens when Ben Earl punched a hole in the middle and several phases later Malins was over in the right corner, rounding off a period of dominance.

Quins hit back, almost going close through their pack before punishing an error as the visitors counter-attacked when Farrell scooped the ball straight into the arms of Dombrandt who sent Joe Marchant over. 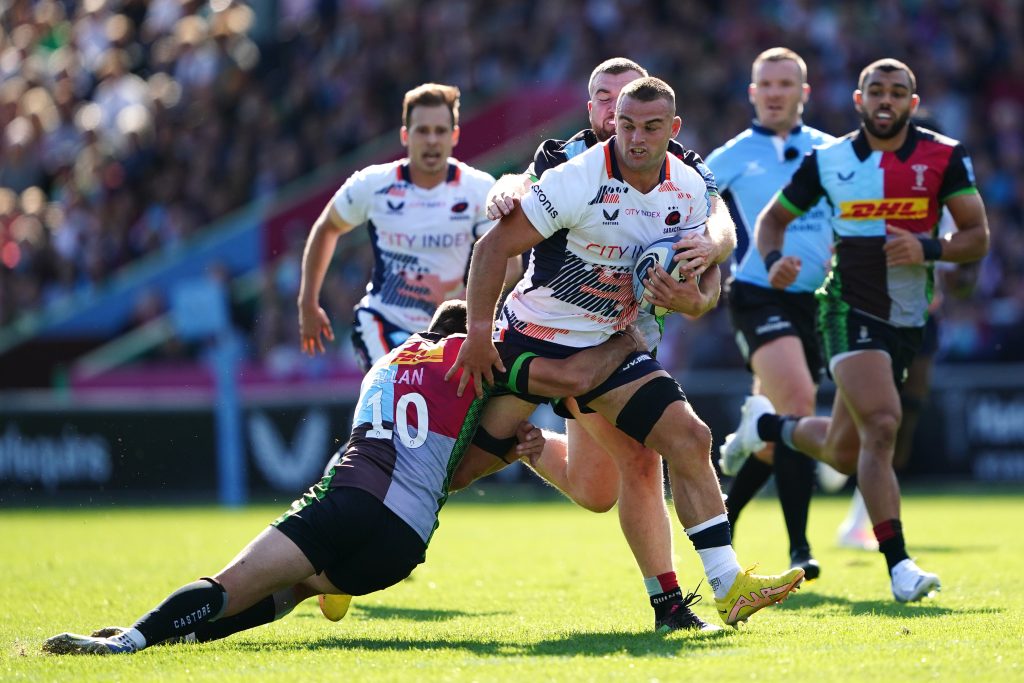 The try came at a cost as Dombrandt limped injury off immediately after and the exhilarating pace of the match continued into the second-half with Saracens the next to score.

Scrum-half Lewis Gjaltema was at the heart of confusion in the backfield and, following a direct run by Alex Lozowski, the ball was threaded to Malins to score his second.

Harlequins were struggling to escape their half as pressure mounted with a Farrell penalty reducing their lead to four points.

Billy Vunipola made his presence felt with two big carries and as a direct result of the second Saracens edged ahead for the first time through Tompkins.

Allan and Daly swapped penalties to continue fraying the nerves right until the end and Quins will rue a butchered line-out deep into visiting territory.