England hooker Jamie George was the target of an alleged taunt by Munster’s chief medic to spark a giant brawl as Saracens kept their Heineken Champions Cup defence alive with a 15-6 victory.

Alex Sanderson, the European holders’ assistant coach, claimed during a touchline interview that Dr Jamie Kearns made a remark about George’s weight as the tension at Allianz Park ignited.

“I don’t want to point fingers, but it was Munster’s fault,” said Sanderson. “I think their doctor said something derogatory to Jamie George about his weight.”

A host of players were involved with George at the centre until the fight became a seething mass of bodies that split on to the athletics track encircling the stadium and then spread into small pockets of conflict.

Referee Pascal Gauzere appeared to want to speak to Dr Kearns only for his focus to switch to the brawl and tournament organiser EPCR is sure to investigate the incident.

"I don't want to point fingers, but it was Munster's fault!" ?

"I think their doctor said something derogatory to Jamie George about his weight." ?

Although the penalty was awarded against Saracens, the hostilities appeared to awaken the reigning champions who at that point trailed 6-3 and were too passive as Munster poured forward.

They responded magnificently by conjuring tries for Sean Maitland and Mako Vunipola to move out of reach, in the process denying their Irish opponents a bonus point. Fielding a matchday 23 containing 20 English qualified players, it was enough to keep them in the hunt for a quarter-final place with two wins from four matches.

Jamie George gets stuck into the #munster medic after kicking the ball at Scannell – then this….@SunSport pic.twitter.com/flGPRA0Eqp

Munster were struck by a double injury blow to their back row early in the pursuit of an upset win at Allianz Park.

Ireland flanker Peter O’Mahony pulled up with a groin strain during the warm-up and was replaced by Jack O’Donoghue before starting blindside Tadhg Beirne was carried off on a stretcher after falling heavily during a tackle in the 11th minute.

Up until Beirne’s departure, Saracens only had an Owen Farrell penalty to show for their dominance and by the end of the opening quarter Munster had barely left their own half.

Billy and Mako Vunipola, Ben Earl and Alex Lozowski made early dents in the opposition and Farrell chose to send another kickable three points into touch for a line-out that amounted to nothing.

When Munster launched their first meaningful attack they built sustained pressure at short range and full-back Max Malins was forced to make a try-saving tackle on Andrew Conway. 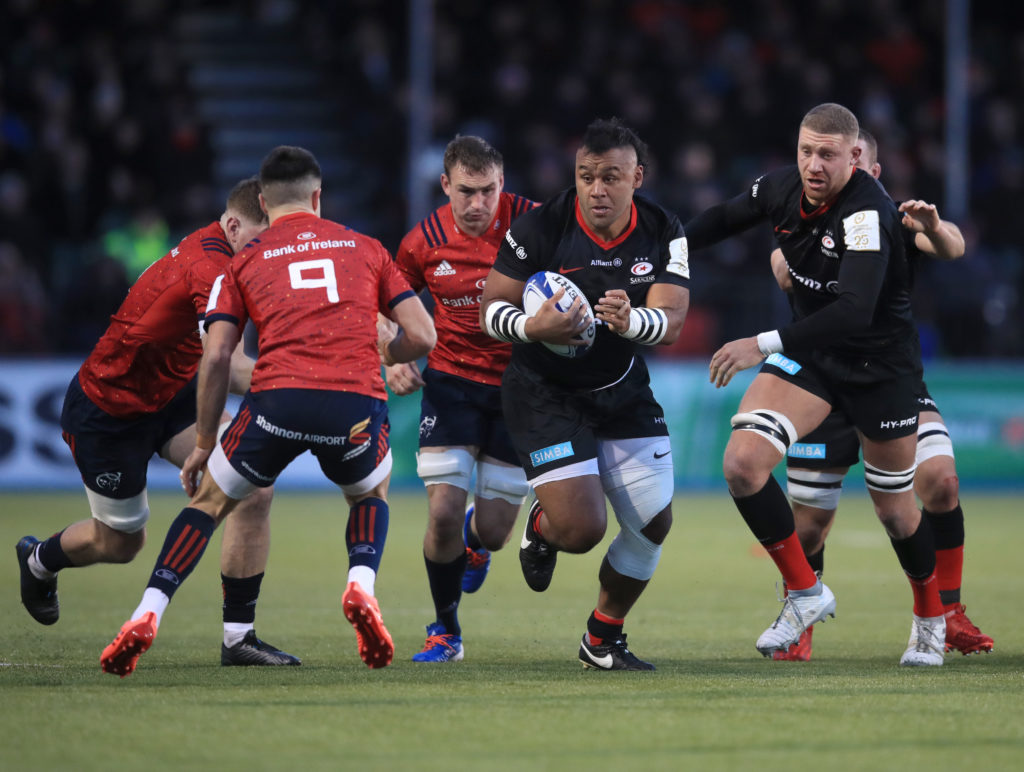 The attack ended with a JJ Harahan penalty but Saracens were straight back on to the front foot with Malins almost wriggling over, but there was a wobble before half-time as Farrell missed a routine penalty and Elliot Daly kicked the ball dead.

Munster were now tightening the screw and it was during this phase that the brawl erupted and once order had been restored, Harahan was given a shot at goal that he missed.

"I think their doctor said something derogatory to Jamie George about his weight." #HeinekenChampionsCup pic.twitter.com/BCc7qgwKoE

Tensions were rising and every victory on the pitch was celebrated wildly by players and fans alike and in the 66th minute Saracens made the breakthrough as reward for a sustained barrage on the whitewash.

Number eight Billy Vunipola broke from a five-metre scrum and after entangling a number of red shirts with his run, he popped out a pass over the top to Maitland to touch down.

Mako Vunipola then delivered the killer blow when he used his strength to power over from close range, ending Munster’s resistance.