Gallagher Premiership XV of the Week - Round 9

Mulvihill faces sanction for comments Next
Back
Gallagher Premiership

Gallagher Premiership XV of the Week - Round 9

The Gallagher Premiership signed off for the upcoming European window in fine fashion, with Round 9 of the competition offering up some eye-catching results.

Harlequins kicked it off by ending Exeter’s unbeaten start to the domestic season, with a 28-26 win at the Stoop, whilst Bristol Bears reaffirmed their ability to cut it at this level, beating Leicester Tigers 41-10 at Ashton Gate.

We have rounded up the top performers across the weekend’s action.

It’s a mark of the level of Brown’s performance that he sees off fierce competition from Charles Piutau and Jason Woodward here. The full-back was rock-solid under the high and contested balls, brought incision in the back line and on counter-attacks, with his straightening of the line, and made multiple broken field one-on-one tackles, one of which was a certain try-saver.

The Australian has been one of the most consistent performers at Ashton Gate this season and maintained that rich vein of form against Leicester. He definitely won his duel with Jonny May, grabbed a deserved try and was inches away from latching onto a kick and finishing another. His industry chasing kicks also regularly goes unnoticed.

Flashes from Manu Tuilagi and Joe Marchant caught the eye, but it was Hurrell that arguably turned in the most complete performance at 13 this weekend. His decision-making at outside centre was excellent, gauging well when to straighten the line and when to involve Morahan and Alapati Leiua. His handling on the gain-line, just prior to and after contact, was also very impressive.

An insightful glimpse into what Saili could offer this Quins side, if he can stay fit. The former All Black was punching holes in the Exeter defensive line all evening, showed good awareness and ability to free his hands after contact, and a solid array of passing brought the threats of Brown, Nathan Earle and Gabriel Ibitoye into the game.

This spot could easily have gone to Earle, with both he and Thorley picking up braces of tries this weekend, but the edge goes to the Gloucesterman, just because of the little bit more he had to do for his two tries and the work he did off of his wing, creating space and opportunities for other players. The 22-year-old is arguably the form wing in the Premiership at the moment and his tormenting of Worcester Warriors was a testament to that accolade.

The Irishman delivered an extremely composed display at Ashton Gate, guiding Bristol around the pitch with aplomb and rarely putting a foot wrong in his decision-making. Leicester may have been reduced to 14 men for much of the contest, but that shouldn’t detract – too much – from the measured passing, darting runs and clinical boot of Madigan, that handed him a haul of 21 points.

A couple of tries and an aggressive tempo from the scrum-half put Northampton into a commanding position against Newcastle Falcons. He did fade out of the game a little in the second half, losing some of his control, but the first 40 was so effective it had put Northampton into a winning position in the game, despite their inability to see it out in the final minutes.

Marler embraced the battle with Greg Holmes that injury denied him the opportunity of taking part in on the 2016 England tour of Australia and he came out well. His ball-placement on his carries close to the ruck helped Quins deliver the quick ball they needed to test the formidable Exeter defence.

Jack Yeandle was impressive at the Stoop on Friday night, but there was no denying Thacker, who followed up his hat-trick off the bench last week with a brace of tries in his start against Leicester. In addition to being a threatening and composed operator with ball in hand, Thacker was extremely accurate at the lineout and the Bristol set-piece boasted a significant advantage over their rivals from the East Midlands.

Worcester were under the pump for much of the second half against Gloucester, but the visitors at Kingsholm had a solid first 40, with Schonert one of the more noteworthy operators. He was key in repelling several threatening Gloucester attacks.

The lock looked as if he’d never been away on Saturday, almost single-handedly wrecking the Wasps lineout at Allianz Park. He carried strongly, too, and brought his customary line-speed in defence that regularly had the visitor’s attack stymied. He showed no signs of fatigue after a busy November with England. 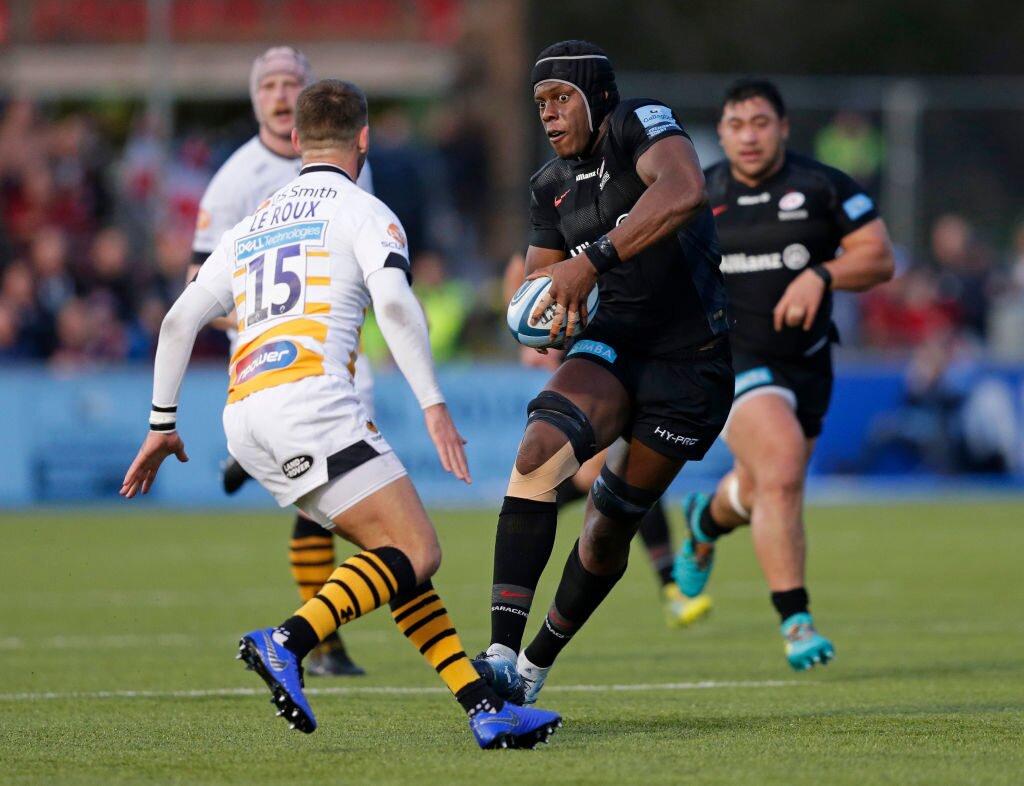 Maro Itoje of Saracens takes on Wille le Roux of Wasps during the Gallagher Premiership Rugby match between Saracens and Wasps at Allianz Park. (Photo by Henry Browne/Getty Images)

A strong showing from Slater, who kept Gloucester’s lineout ticking along in efficient fashion, as well as providing a powerful carrying presence on the pick and go and as a receiver close to the ruck. His mobility for a tight five forward, to get around the pitch and influence the contact area battle, was also very noticeable.

The former Cardiff Met and Wales U20 man continued the scintillating start to his Premiership career on Friday evening, giving Exeter a taste of their own medicine with a dynamic power game. The flanker was a force with ball in hand that Exeter had no answer for and he even led Quins in tackles, many of which were textbook, aggressive one-on-one hits on or behind the gain-line. An extremely worthy man of the match-winner at the Stoop.

A mention, too, for Steven Luatua’s heroics in Bristol’s 41-10 victory over Leicester.

Jack Clifford is narrowly denied a spot that would have completed an all-Harlequins back row by the South African fetcher, who is looking every bit as comfortable in the Premiership as he was in Super Rugby. His selective involvement defensively is helping Gloucester prosper with their high-octane, counter-punching style as he bolsters their transition game, whilst he is a dangerous runner, complementing the more physical, direct carriers elsewhere in Gloucester’s back row.

Chisholm is not only bearing the burden of captaincy well at Quins, he is seemingly flourishing under the increased expectations. He delivered another colossal performance on Friday night, keeping Quins moving forward against a solid and resolute Exeter defence, as well as showing ruthless efficiency at the contact area against adept operators like Dave Ewers and Don Armand. Eddie Jones’ door isn’t just being knocked on, it’s being hammered down.

Watch: The latest episode of The Short Ball, with Scotty, Mils and Ali Williams.