END_OF_DOCUMENT_TOKEN_TO_BE_REPLACED

'He should never captain the All Blacks again': NZ leadership guilty in numerous late collapses
M
Mark 31 minutes ago

Yes, it was a troubling last 10 or so minutes, that quite frankly was piss poor play from the AB’s. I thought I was watching a different team, making decisions that we expect from other teams ,not us. This mental breakdown has to be addressed, recognised and dealt with in a hurry.. we can’t take this attitude to France next year Or we’ll be blown away .

END_OF_DOCUMENT_TOKEN_TO_BE_REPLACED
Ditch the stereotype: This Springboks team can play
W
Warren 34 minutes ago

I agree with the author. Something special is brewing. And based on the November results, I reckon these Boks are saying "yes, we lost to Ireland and France, but we know we can beat them on any day" there will be belief in this group, especially after the Marseilles match. I think Faf will be trusted with goal kicking. I also think that Cheslin's spot in the starting 15 isn't guaranteed. Don't be surprised if the backline looks like this - 9: Faf, 10: Damian, 11: Moodie, 12: Allende, 13: Lukhanyo, 14: KLA, 15: Willie. A 6-2 split bench with Cheslin and Jaden on the bench. Exciting.

George Furbank kicked a last-minute penalty to send last season’s runners-up Exeter to a second defeat in the opening two weeks of the new Gallagher Premiership campaign as they lost 26-24 at home to Northampton.

It was also Northampton’s second success at Sandy Park in the calendar year as they triumphed 13-12 back in February.

Exeter outscored their opponents in terms of tries by scoring three with Jack Maunder, Don Armand and Rus Tuima on the scoresheet with Joe Simmonds converting all three and adding a penalty.

Saints made an explosive start as the first play saw Furbank run 50 metres from inside his own 22 but a knock-on ruined their chances of taking a first-minute lead.

They were soon made to pay as Exeter scored two converted tries within three minutes. First Armand finished off a succession of forward drives before a flowing move ended with Maunder chasing a kick from Henry Slade to collect a favourable bounce and score.

Northampton were shell-shocked but they responded by opening their account. Grayson split the defence before kicking ahead, with the ball evading the covering Tom O’Flaherty for Mitchell to touch down.

The visitors continued to look sharp in attack and it came as no surprise when they drew level as Proctor brushed away weak tackles from Simmonds and Will Whitty to race away for an excellent solo try.

The game was rapidly turning into a contest between a dominant Chiefs’ pack up against the dexterity and speed of Northampton’s backs.

There were a number of sustained periods of pressure from the home eight but somehow Saints kept their line intact to break out with a lot of enterprise and it was they who picked up the next score when Grayson kicked a penalty.

Two minutes before the interval, Northampton hooker Sam Matavesi was yellow-carded for a no-arms tackle with the hosts immediately capitalising with a close-range try from Tuima. A third conversion from Simmonds gave his side a 21-17 half-time lead. 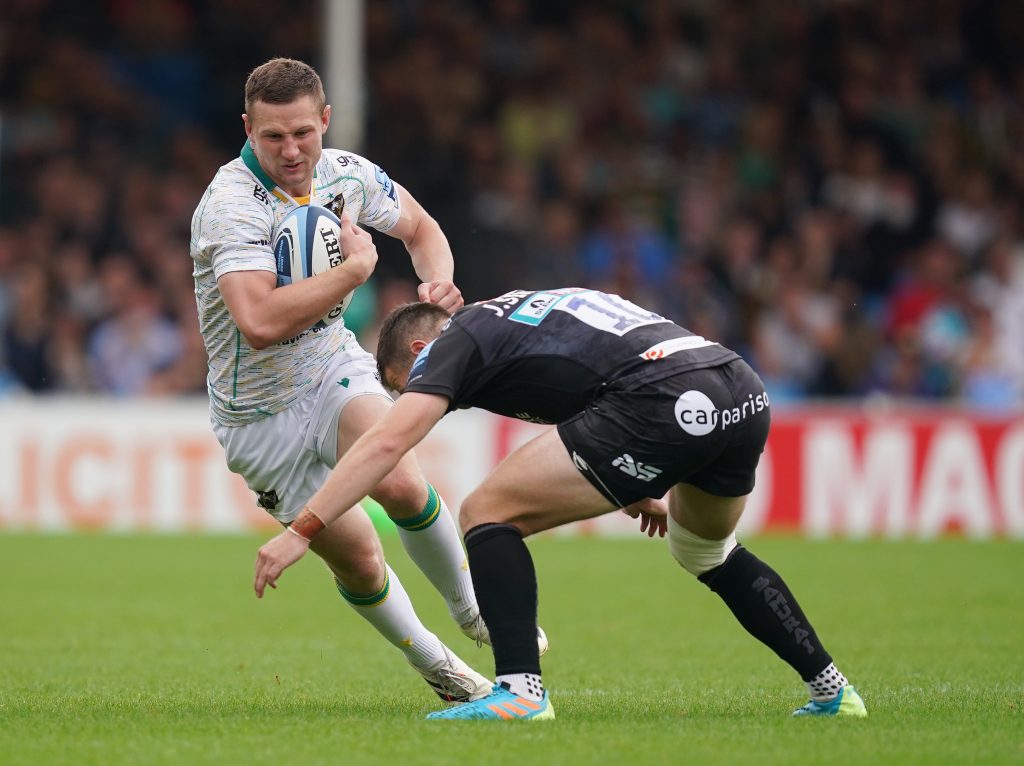 Matavesi returned from the sin-bin in time to see Simmonds kick a penalty, which was the only score of the third quarter as the outside half missed with another attempt.

Grayson kicked his second penalty as the second half continued to lack the entertainment of the first with both sides now favouring the kicking option.

Saints took off Grayson in favour of Tom Freeman with Furbank moving to outside-half and assuming the kicking duties and it was he who was the match-winner as he held his nerve to succeed with two penalties.