'The thing is you cannot replace Duane because you just can't'

Schalk Brits believes the return of the “phenomenal” Duane Vermeulen can deliver a third test win and a 2-1 series triumph over the British and Irish Lions in Cape Town on Saturday.

Vermeulen and Brits helped South Africa win the Rugby World Cup in Japan where the No8 was a key weapon in the forward battle that saw England beaten 32-12 in the final. Now, having missed the first two tests which the teams shared, Vermeulen has recovered sufficiently from ankle surgery to be added to the Springbok squad for the titanic decider.

The 54-cap back-rower joined the Springboks camp in June only to suffer the injury, and has been undergoing hyperbaric oxygen therapy in a bid to be fit to face the Lions.

Brits gave RugbyPass an insight into the impact his former World Cup roommate (“he was until he started snoring”) can have on the vital third test saying: “The thing is you cannot replace Duane because you just can’t. There are certain players like that and Duane is one of them and I believe he is in the prime of his career.

“He brings a phenomenal presence and captaincy to the team because his leadership has a big role in the Springbok group and then there is his physicality which is exceptional. Also, when things are going south in a game, it means there is another guy next to Siya (Kolisi) that players can look at.

“The third test is going to be about the gain line and who can dominate an that is where Duane has a big part to play because he can win the gain line and also put in the big tackles as we saw in the World Cup final against England in 2019. He puts his head in there.

“Duane’s value to the team is clearly seen when he isn’t there and things are not going so well. He brings it to every game and I don’t think there was someone putting their hand up like Duane to take the high balls in this series.

“Peter Steph du Toit is a phenomenal rugby player and it is unfortunate he is injured and going forward how do you get the right combination? In the first test our pack did not dominate and then it becomes hard for the back row but in the second test the replacements made a massive difference and the use of the bomb squad was the way we normally did it (in the World Cup). Getting Lood de Jager and Duane into the mix means the Boks will have four line-out jumpers for the final test and that makes it so difficult for the Lions to compete against us.”

Having lost the physical battle and the first test to the Lions, Brits was delighted to see his former teammates rediscover their fight to come out clear winners in the second test with the second half replacements playing a major role in setting up the deciding match. 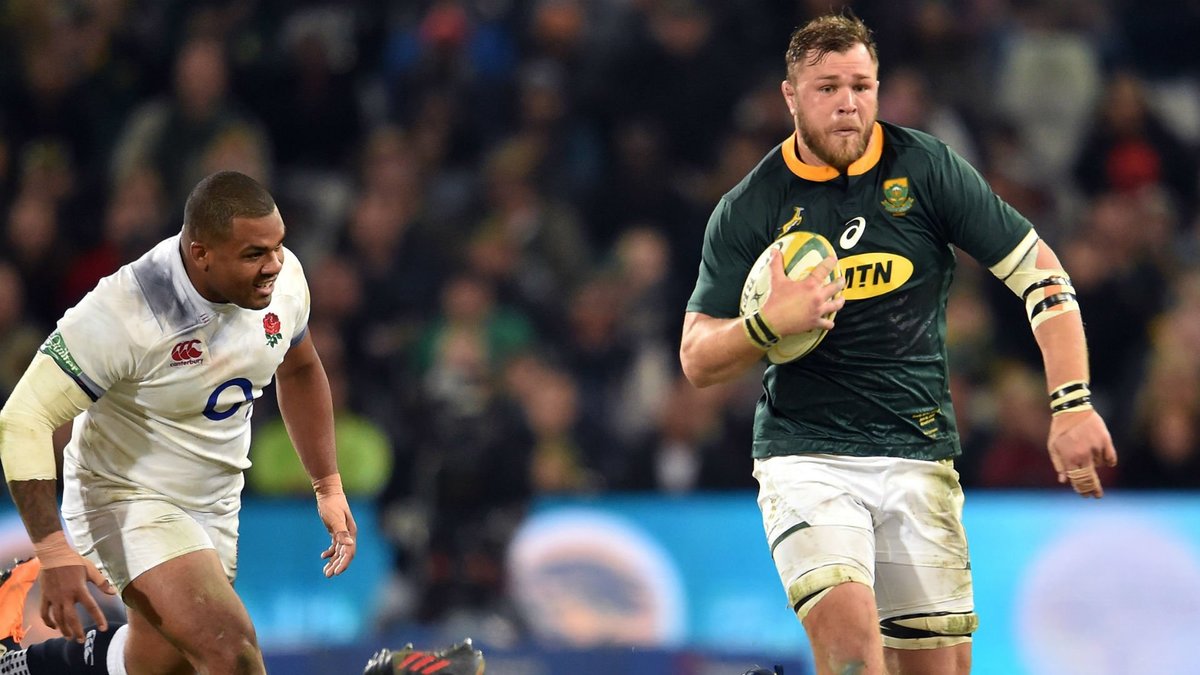 Duane Vermeulen on the charge /PA

Brits added: “The guys were very motivated after being thumped in the second half of the first test and then we saw a complete role reversal in the second test last Saturday. I don’t think that tactically anything is going to change and both teams have the same kind of game plan and once again it will be who can dominate the set-piece and the kicking game.

“The culture of the Boks group is amazing with their never say die attitude and from that perspective, it will be an amazing final test. In terms of the talk about the referees, there was a cat and mouse before the two tests and I don’t think that will change for the last one and it is vital to manage the referee not take the attitude that he isn’t there. For the last ten years the New Zealanders have managed the referee better than any other team.

“It will be important to start on the right side of the French referee on Saturday and stay there! Of course I am going for a Springbok win and once again it is question of can the Lions match our physicality when we are on song. If you want to beat anyone you have to front up and get stuck in which is why I was so surprised in the first test when Cheslin Kolbe was man-handled by Mako Vunipola and none of the Boks went in. In the second test they corrected that.

“There was a lot of niggle last Saturday and it will be the same in this final test.”

LIONS ROUND-UP: Gatland's side must regroup fast after a humbling loss in the second Test. #LionsRugby @thefamousgrousehttps://t.co/B5FJMyh9Rt

'The thing is you cannot replace Duane because you just can't'

A history of biting bans Next