Premiership Rugby have taken a deep dive into the try-scoring of Chris Ashton, the ex-England winger who last Sunday entered the top-flight’s history books as his brace in Leicester Tigers’ win at Exeter Chiefs saw him draw level with Tom Varndell at the top of the competition’s all-time leading try-scorers.

The 91st and 92nd tries of the winger’s Premiership career helped his side to secure a semi-final spot and he now needs just one more score to stand alone at the top of the standings.

Having unceremoniously exited Worcester earlier this season, Ashton was snapped up by Leicester for the Premiership title run-in and having turned 35 on Tuesday, his efforts at Sandy Park illustrate how age isn’t slowing him down the older he gets.

Premiership Rugby data analyst Max Wright has now produced a captivating graphic dissecting the 92 tries that Ashton has scored over his many years in the league, a contribution that began at Northampton following his cross-over from rugby league through to his latest exploits at title-chasing Leicester.

Here is what Wright discovered: “Ashton has comfortably played for more clubs than any of the other top ten scorers, with no other player scoring for more than three sides in their careers. Three of our top ten try scorers only scored for one club – Mark Cueto and Steve Hanley at Sale, and Christian Wade at Wasps. 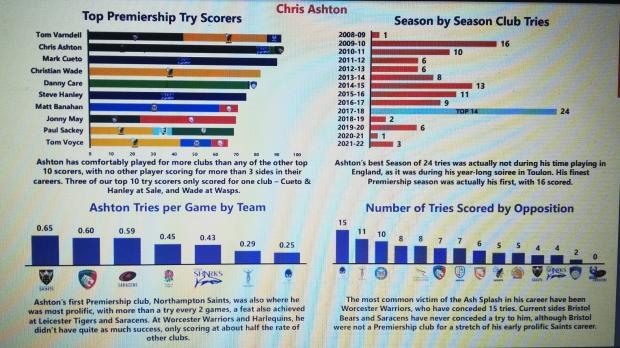 “Ashton’s best season of 24 tries was actually not during his time playing in England, as it was during his year-long soiree in Toulon. His finest Premiership season was actually his first, with 16 scored. His first Premiership club, Northampton, was also where Ashton was most prolific with more than a try every two games, a feat also achieved at Leicester and Saracens. At Worcester and Harlequins, he didn’t have quite as much success, only scoring at about half the rate of other clubs.

“The most common victim of the ‘Ash Splash’ in his career has been Worcester, who have conceded 15 tries. Current Premiership side Bristol and Saracens have never conceded a try to him, although Bristol were not a Premiership club for a stretch of his early prolific Saints career.”

Having drawn level with Varndell on 92 tries scored last weekend, Ashton won’t have an opportunity to set a new record until April 23 when Leicester are due at Harlequins in round 23 of the Premiership. They are currently on a bye-week in the league and will take on Clermont twice in the Heineken Champions Cup round of 16 before returning to Premiership action.