Saracens’ first Gallagher Premiership match since they accepted automatic relegation ended in heavy defeat as Harlequins eased to a 41-14 win at the Stoop.

The reigning champions, who were found to have persistently breached the salary cap, were overawed in the first half as Cadan Murley’s two tries and Danny Care’s effort set up a convincing win.

Without their international stars due to the upcoming Six Nations and with little to play for, Saracens fielded a young side and were ruthlessly exposed by Quins, who climb into the top half of the table.

Saracens, who were hit with a 35-point penalty earlier in the season, stay bottom with only tries from Alex Lozowski and Dom Morris providing a crumb of comfort. 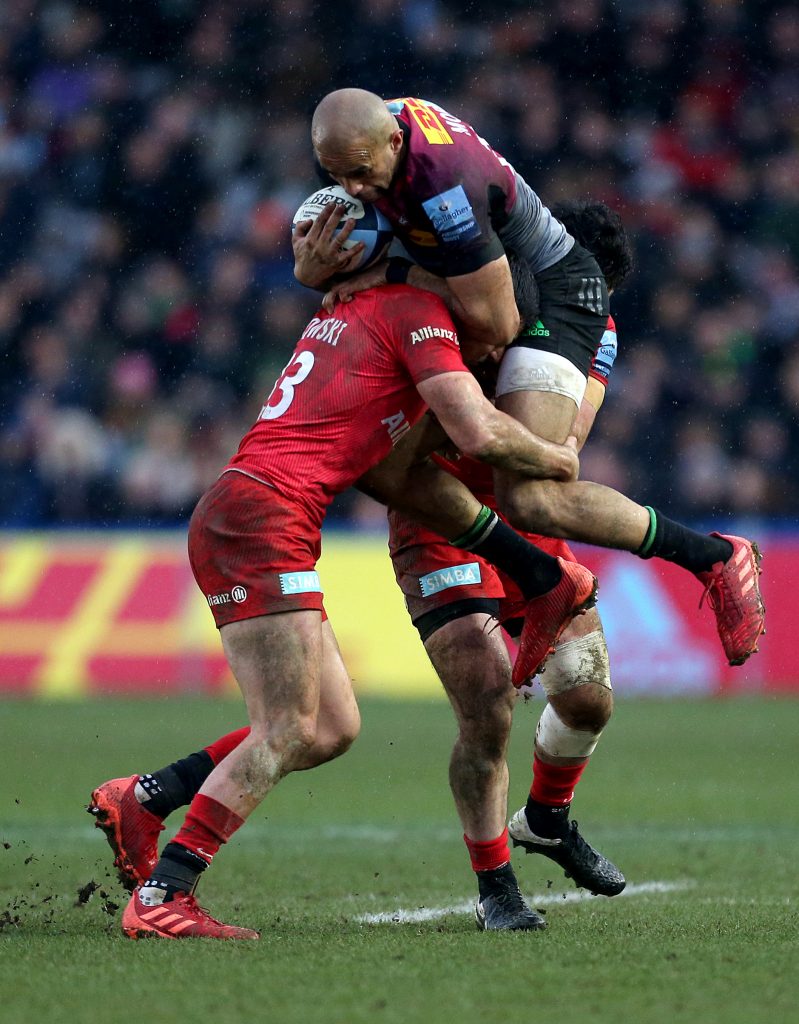 Quins, roared on by a raucous home crowd, made a lightning start and scored within two minutes.

Number eight Alex Dombrandt, left out of England’s Six Nations squad despite a lack of options, showed what he can offer by bulldozing his way through Saracens’ defence from midfield. 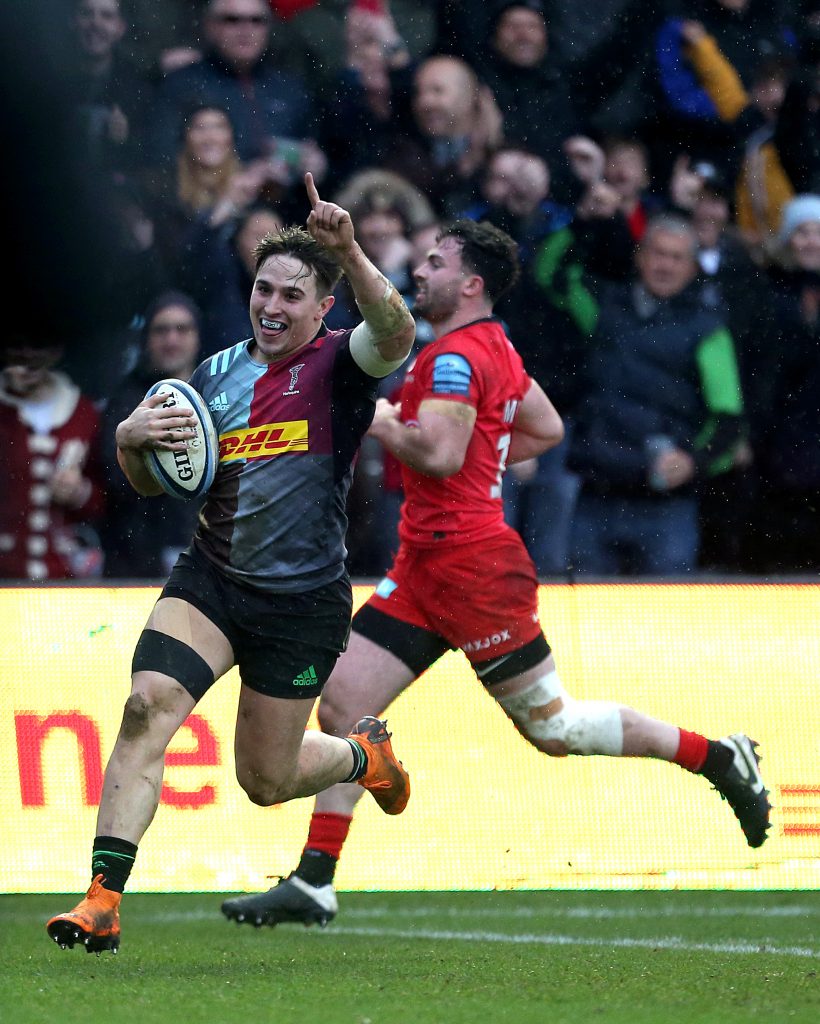 He exchanged off-loads with scrum-half Care, who eventually burst clear to touch down before fly-half Marcus Smith converted from the right.

After that breathless start, Saracens struggled to respond. They were disjointed in attack and defence and outmuscled by the hosts, who were strong in the tackle and inventive on the ball. 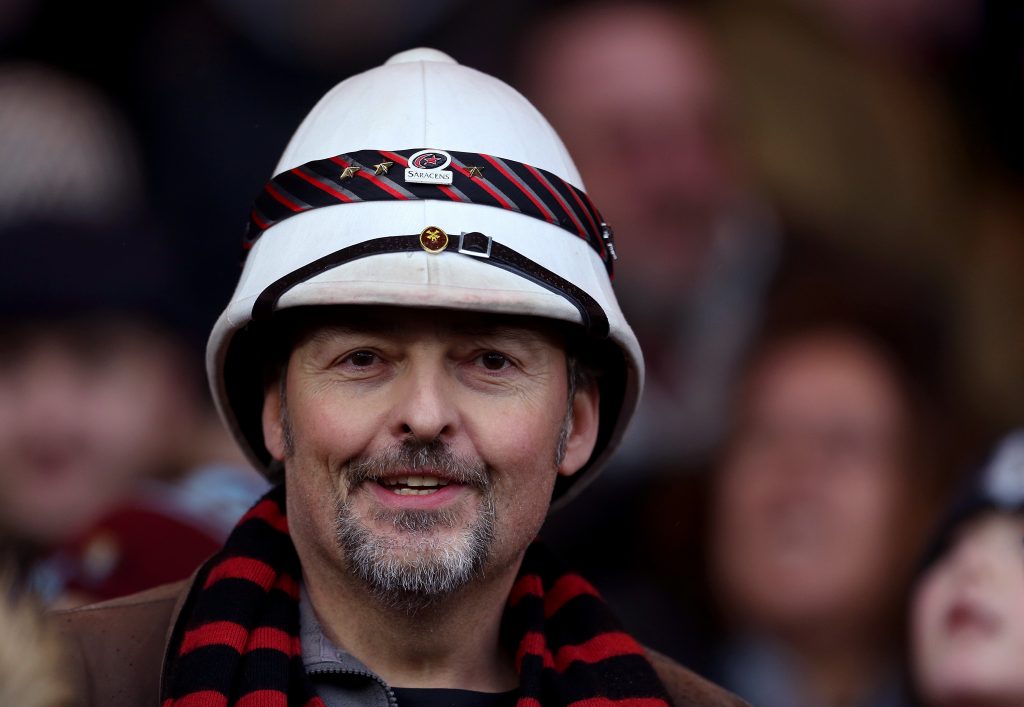 A second try appeared inevitable and it came in the 11th minute. Smith’s cross-field kick from the left found hooker Elia Elia on the right and he burst through one tackle and off-loaded to Murley, who ran a perfect support line and slid over to score. 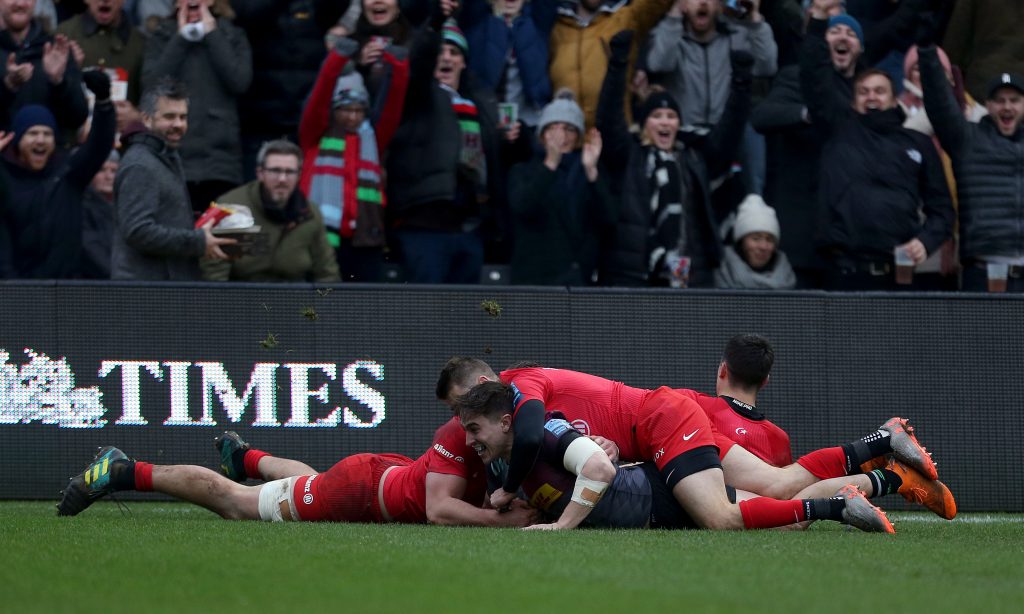 Saracens tried to regroup but they could not generate meaningful possession and the pain kept on coming. Smith, in the middle of a kicking exchange with full-back Matt Gallagher, collected the ball inside his own half, faked a clearance downfield and cut inside wing Rotimi Segun.

With space in front, he sprinted clear before passing inside to centre Paul Lasike, who in turn found a grateful Murley and he ran clear for his second try. Smith converted to make it 19-0. 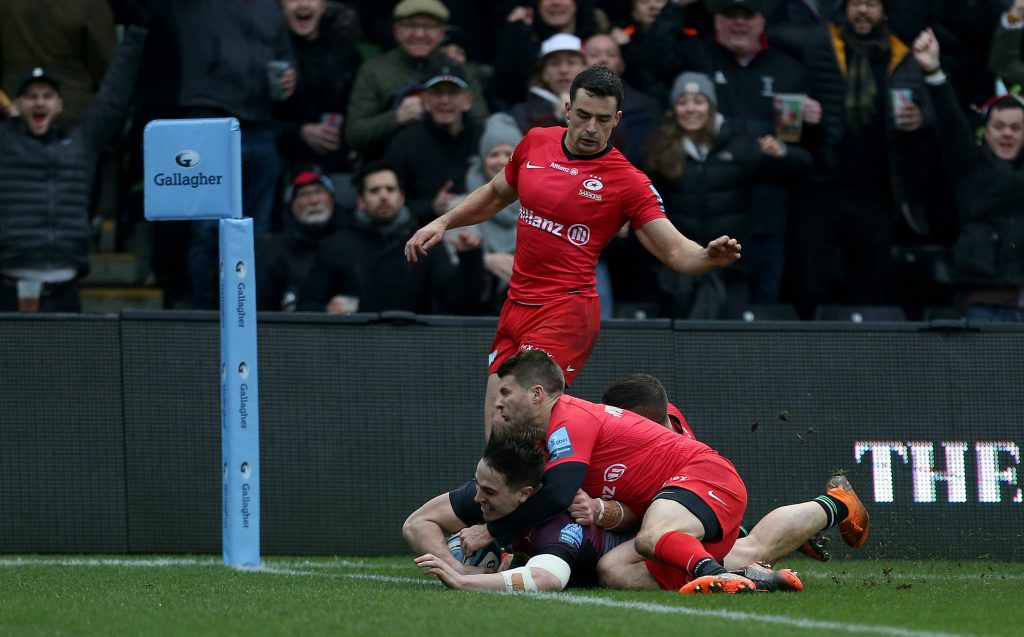 As the weather worsened, Saracens improved and with just over 10 minutes left of the first half they gained a foothold as Lozowski crashed over from a metre out.

But any hope of a comeback was snuffed out just four minutes into the second half, when a grubber kick forward was spilled by Gallagher and pounced on by Gabriel Ibitoye for the bonus-point score. 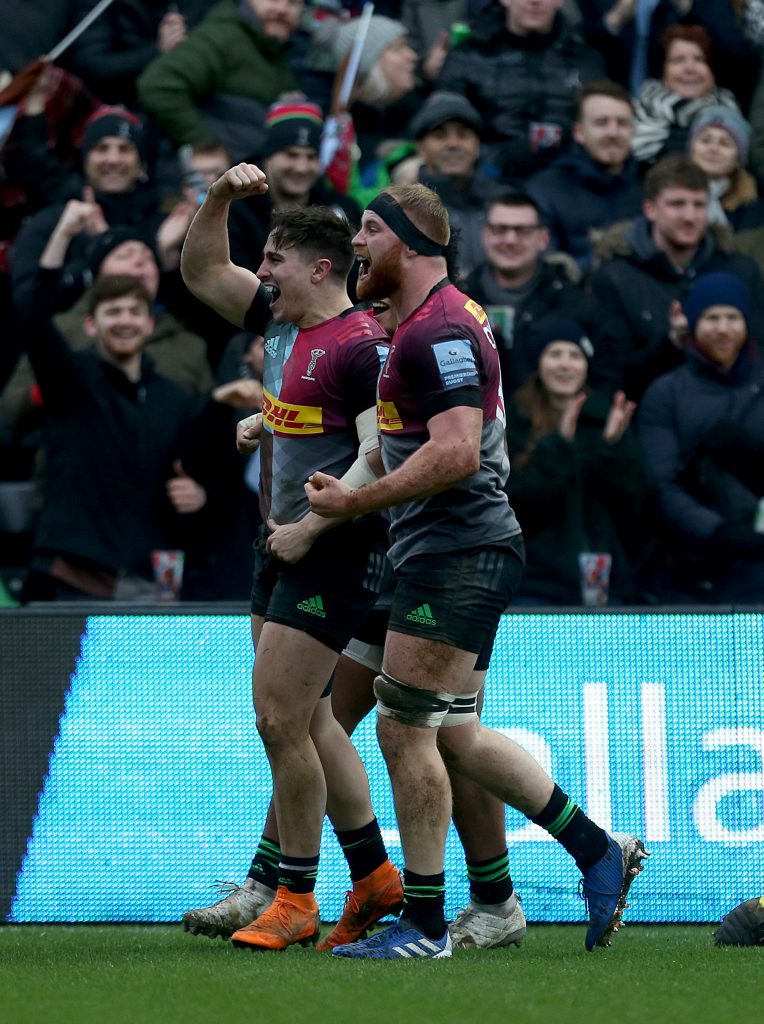 A fifth try soon followed as Saracens fell apart. From a Quins line-out five metres out, Elia powered forward and passed inside for Lasike to dive over.

Morris later capped his Saracens debut with a score in the corner but Quins had the last laugh when replacement Martin Landajo intercepted a loose ball and ran in unopposed. 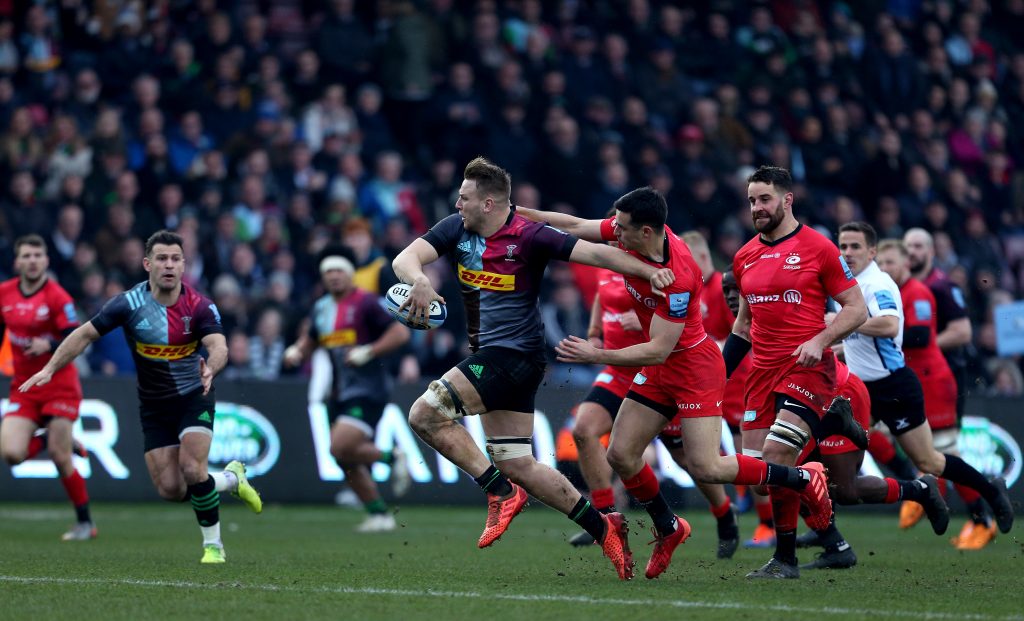 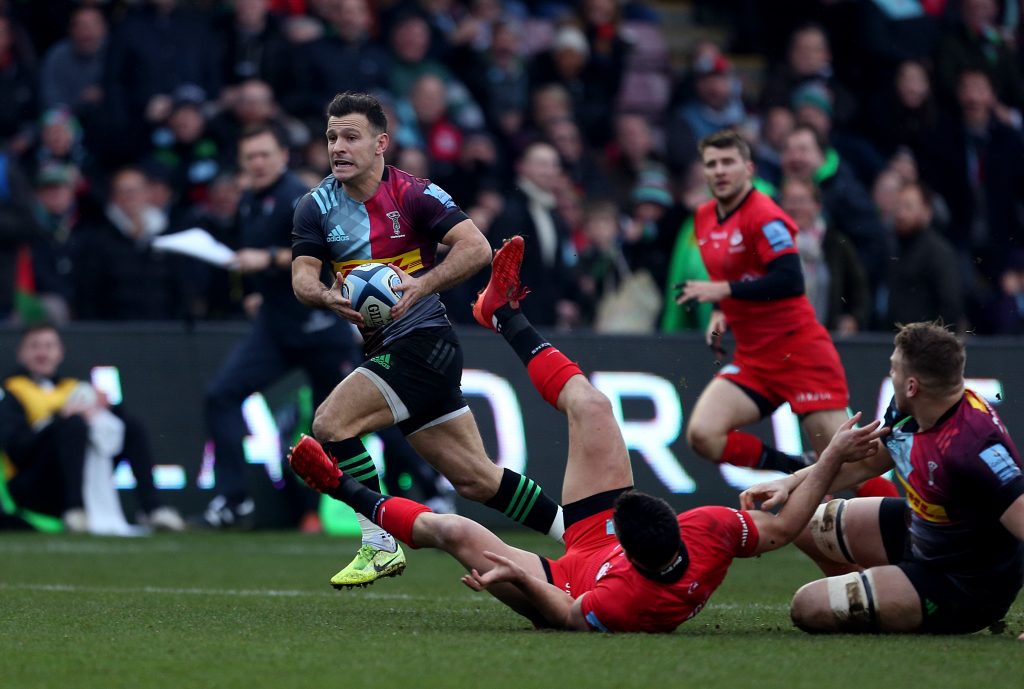