END_OF_DOCUMENT_TOKEN_TO_BE_REPLACED

Warren Gatland to be confirmed as new Wales head coach

END_OF_DOCUMENT_TOKEN_TO_BE_REPLACED

Here's the thing. We have belt tightening conversations due to financial worries in both England & Wales. Most seem to be going to France which has the most stable domestic game. But France can't support everyone. I know that certain other unions & domestic leagues are worried that living within their means will lose them players. To an extent, they're right. But again, there are only 14 top flight clubs in France and plenty of good French players. At a certain point the market for professional domestic rugby can't support all the players who want to make more, which will ultimately allow for the necessary belt tightening. Who knows maybe a few more can go to Australia, make Super Rugby not so lopsided towards NZ (really just Blues & Crusaders). At the end of the day, if the revenue isn't there, in Wales or in England, it's not there. England can't support 14 clubs at the top, probably not even 12, should be at 10 with a better TV deal spread between fewer clubs. Who knows maybe Wales should be cut back to 2 like Scotland?

Hi All. What everyone seems to forget is that EJ will be a great asset to England's rivals. His knowledge of the English setup and players, can be used against them. Rassie for one might be the first to rope him in. For this reason, i believe his job is safe for now

Saracens struck late on to beat Harlequins 29-22 after the Gallagher Premiership title contenders appeared to be headed for a stalemate at Twickenham Stoop.

With the score tied at 22-22 in the 77th minute, Jackson Wray crossed in the right corner after Alex Lewington had carved open the champions with a decisive run.

Saracens trailed 19-9 shortly before half time having leaked tries to Hugh Tizard, Cadan Murley and Tyrone Green but they fought back when Dominic Morris touched down.

Underpinning their comeback was the pinpoint kicking of Alex Lozowksi, whose five penalties meant they were always in the hunt. 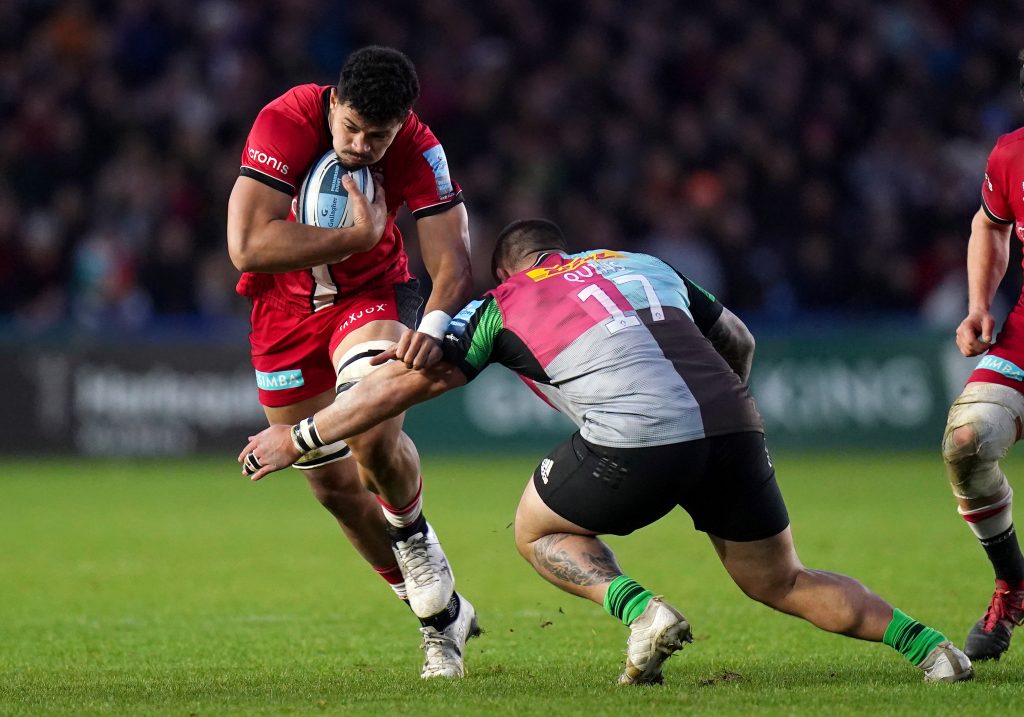 The often stormy battle between London rivals lost its box office appeal when the timing of the derby meant eight players were lost to England’s squad for the Autumn Nations Series, but a captivating afternoon unfolded nonetheless.

There may have been no Owen Farrell, Marcus Smith, Max Malins or Joe Marler – all likely starters against Tonga on Saturday – but skill and passion were still abundant in a derby that went down to the wire.

Quins were grateful to Saracens’ indiscipline that helped them seize an early lead as Vincent Koch’s late hit on Tommy Allan was punished with a kick into the corner that offered the platform to attack. 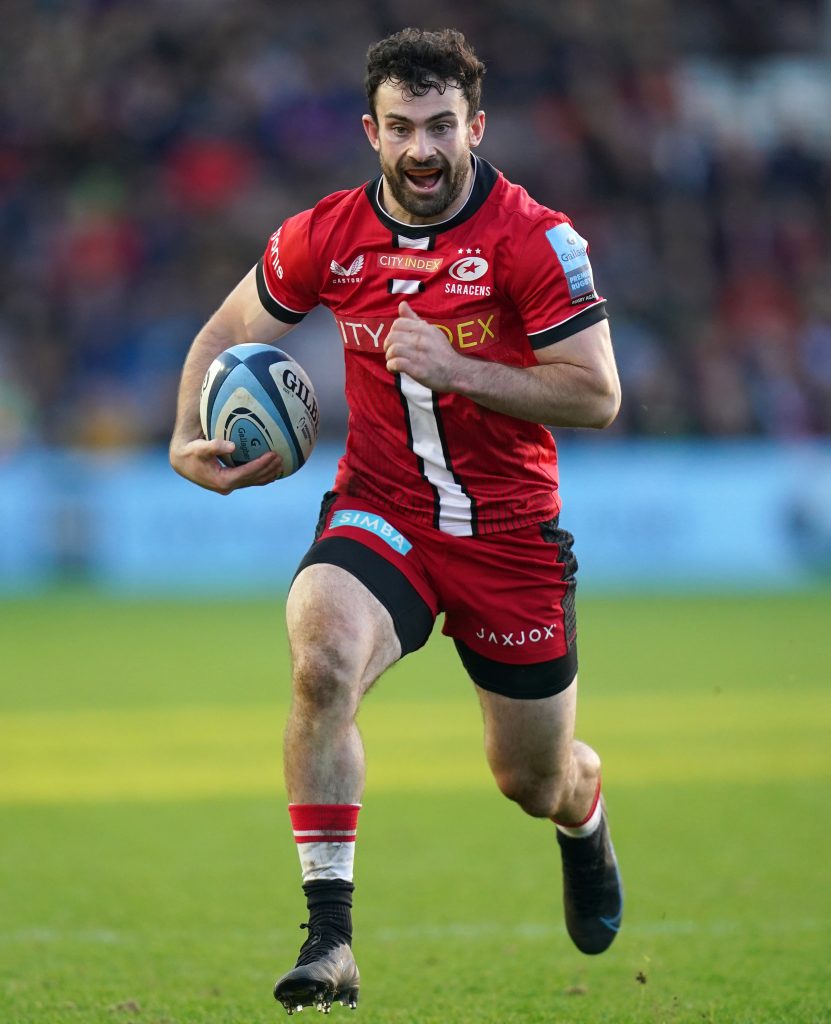 Andre Esterhuizen powered through the visiting defence, and when the ball found Tizard the lock used his strength to force himself over the line despite the attention of several tacklers.

Lozowski replied with two penalties but Quins’ next attack was clinical as a long pass from Allan sent Tom Lawday galloping into space before Murley finished the move by steamrollering over Alex Goode.

A successful 50-22 by Allan kept up the pressure but the Italian fly-half then failed an HIA and when Saracens signalled for Lozowski to kick a third penalty, the crowd replied with calls of “boring”.

Instead, it was Quins who kept banging the drum for attacking rugby as they claimed a third try, with a short pass to Lawday exposing a hole in defence that the marauding number eight sped through before sending Green over.

A yellow card for Dino Lamb for a dangerous clear-out on Andy Christie dented the champions’ momentum but they defended their line magnificently when Saracens looked certain to score. 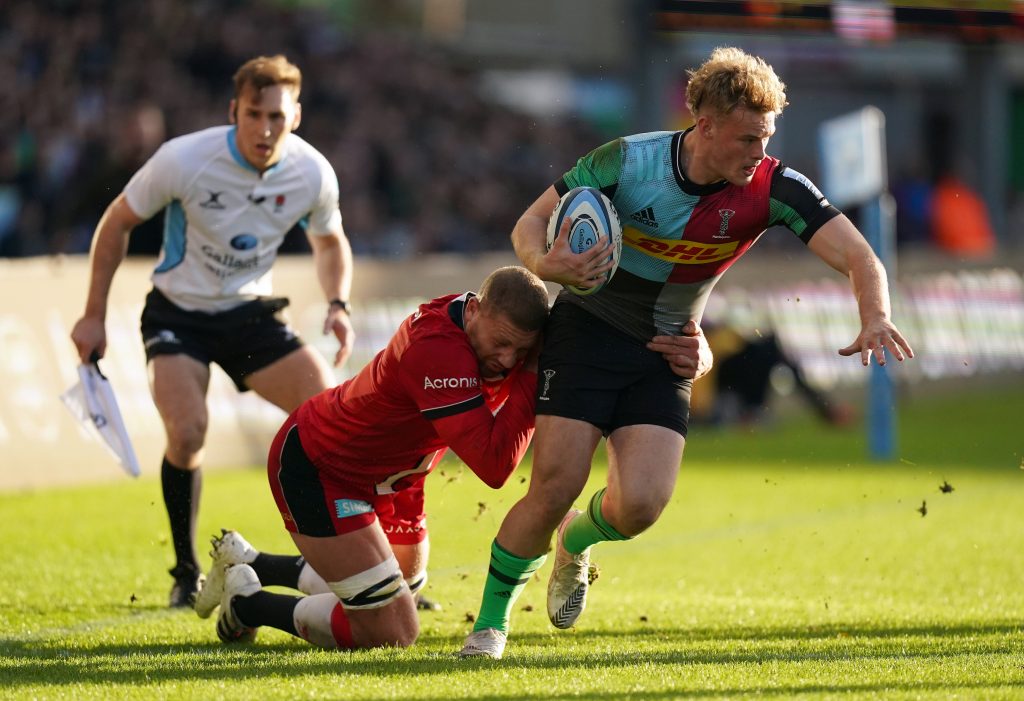 There was no stopping Mark McCall’s men a minute after the restart, however, as they showed precision and patience to construct a simple run in for centre Morris.

Danny Care landed a drop-goal to place Quins 22-16 ahead – their only score of the second half – and the game tightened up with Saracens’ defence having successfully regrouped during the interval.

In a first of the afternoon and emblematic of how space had dried up on the pitch, the hosts went for the posts when awarded a penalty, only for the woodwork to intervene.

Nerves continued to shred as Lozowski was on target twice more to level the score at 22-22 and a moment of magic was needed to end the stalemate, Lewington stepped up to shred the tiring hosts and send Wray over.