Analysis: The Exeter Chiefs have invented rugby's newest attacking structure that might double the size of coaching playbooks

Rob Baxter’s machine keeps on moving forward, finishing as the Premiership’s top side after the regular season with a 17-5 record. Whilst the final quarter to their season was a bit scratchy with up-and-down results, they have proved to still be the only genuine threat to Saracens over the course of the year.

They have maintained their status as one of the Premiership’s top two sides in part by continuing to innovate, changing not only the parts in the system but the system itself.

The Chiefs have a roster largely still constructed around players from the 2016-17 Premiership side, but have filtered in key pieces like Nic White, Matt Kvesic, Sam Simmonds, and Santiago Cordero over the last couple of seasons.

Whilst it would be tempting to plug those pieces into a system that has been proven, the pace of change and copycat nature of professional sport means that widespread adoption becomes the norm pretty quickly. What was unique yesterday is everywhere today. Most teams employ the similar phase play structure the Chiefs have used with great success over the last few years, although each team has varying degrees of execution.

To stay at the top you have to evolve, be prepared to change before you become outdated. So, what have the Exeter Chiefs done to evolve?

Modern-day phase play structures have become multi-layered formations, generally around horizontal pods of three or two at the first level, utilising backs as receivers in behind in the second level.

This is a typical second phase set-up going the same way using a two-man pod with a midfielder in behind that has become the modus operandi of many pro teams across the globe. 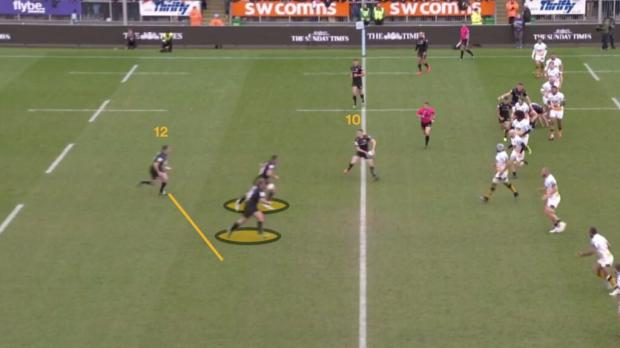 The Chiefs have started running vertical pods during phase play, or stacks, often only seen on midfield scrum plays with backs. The two-man pod is vertically aligned in a stack with Matt Kvesic at the front and Don Armand in behind. Once midfielder Ollie Devoto (12) starts his line, it briefly becomes a three-man vertical formation. 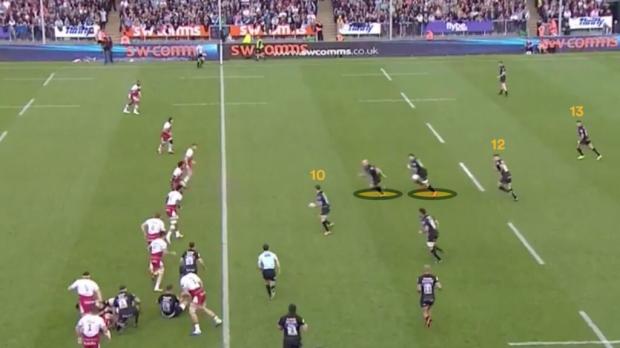 Using stacks is a way to create pre-play misalignment with defenders. It immediately forces the defence into ‘zone’ type coverage, where they have to decide which man to take on the run without knowing beforehand which man is theirs.

It often results in defenders moving laterally to chase runners as they never have original front-on alignment. The one man who does have alignment has to decide which guy he will ultimately take and can be manipulated to move off his spot.

To illustrate this, consider this play below. If the first man in the stack runs a bounce line to the outside, it could have the desired effect of ‘pulling’ the man aligned with him wider, opening up the hole for the second forward Don Armand behind him running straight.

If Joe Simmonds (10) is able to play late at the line and commit his aligned defender, Armand will go straight through. This time Kvesic is used running straight but we see Saints midfielder Rory Hutchinson (13) biting in on the second forward in the stack. Armand was able to attract a defender laterally inward, creating an opportunity out the back for Ollie Devoto (12) and Henry Slade (13) to attack the edge. If Simmonds held the ball longer he may have been able to play Devoto out the back and utilise the 3-on-2 overlap.

Hutchinson began the phase aligned to no one due to Armond lining up behind his own player, so had to make a decision to move laterally to make a tackle, becoming susceptible to manipulation.

Concentrating a high number of players in short space can be used to ‘flood’ one area and create gaps, which is what the Chiefs are doing here with stacks instead of normal pods.

Exeter is one of the first teams, if not the first, to actively install ‘stacks’ in their phase play patterns everywhere across the park to blur the picture the defence is seeing, and create a new problem for the defence to solve on each phase. This is another stack, this time running off 9. They run a screen pass to play the second forward Kvesic out the back but the pass is a little off from the halfback. They are then looking to work in winger Jack Nowell (14) and Devoto (12) off Kvesic. 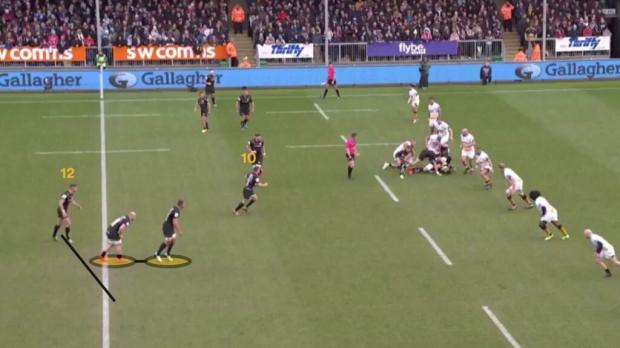 Against Leicester, Exeter used this stack variation to slice the Tigers in half with England centre Henry Slade.

Instead of two forwards in the stack, Slade slides in as the second man as a change-up, with Devoto still in the back as we have seen previously. Simmonds takes it to the line he engages his defender and the defensive smarts of Leicester’s forwards are about to tested. 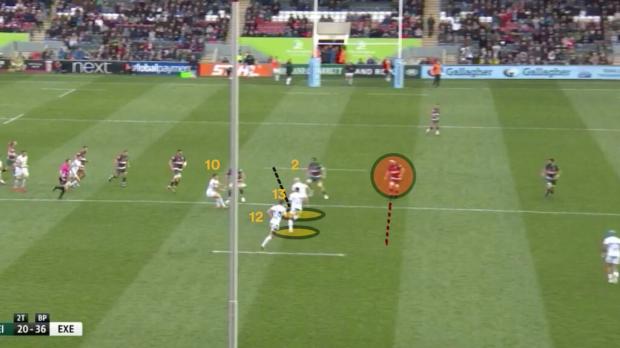 Exeter’s hooker Jack Yeandle runs an ‘unders’ line on lock Will Spencer, drawing a bad read and contact as Spencer clocks him well after Slade receives the ball out the back running a rocket line up the middle. With Leicester’s next defender Brendon O’Connor isolated in no man’s land, Slade explodes through the hole into the Tigers’ backfield. Slade attempts to run around the fullback before linking up with Devoto to finish off the long-range strike, a beautifully constructed play out of this new shape.

Exeter’s execution with ball-in-hand hasn’t been as clinical at times lately, resulting in mixed results with this new idea, but this I-formation stack attack in phase play is one of the more groundbreaking progressions of the year for modern rugby structures.

To add in pre-play disguises like stacks during phase play requires strict organisation, precision and high work rates. The speed of the recycle is as quick as it has ever been, so to add this extra layer of complexity is going to take time to completely nail down, but has the potential to evolve modern attacking structures once again.

Exeter have been floating between these vertical stack formations for pods and regular pods of late, offering variation to their width game and two operating systems to break down the defence with. The playbook may double in size if vertical pods become used half the time.

Exeter does have other tools at their disposable, namely scrum dominance and forward play inside the 22, which has been responsible for creating the bulk of the scoring opportunities when they haven’t been clicking.

The closer they get to the try line, the more narrow they become. It is misguided to say the Chiefs are all about ball movement and innovative schemes. That is certainly true in the middle third of the field, but they also rely heavily on their pack to maul and bully there way over to finish drives in prime attacking position inside the 22.

However, the Chiefs have shown a willingness to try new schemes, finding the balance between old school grit and innovative new plays. This one may have just opened up a can of worms, sparking the next wave of attacking structures.