'When our coaches mentioned they had seen a load of champers going into the Bristol changing room, we were absolutely raging' The pre-match build-up at the Memorial Ground in Bristol was going swimmingly. Bristol, that ageing aristocrat of West Country rugby, were prepping for an evening where the result versus Exeter was a foregone conclusion, judging by the estimation of the local bookmakers. A return to their rightful home in the Premiership beckoned.

While the seats were occupied, programmes sold, beer kegs loaded and television stanchions eased into position, the underdogs were getting whipped up. After a tense 9-6 victory in the first-leg, the Exeter Chiefs knew they could be spiriting their way back down the M5 a few hours later with a place in the Premiership secured for the first time in the 139-year history.

As the din of the crowd intensified in the changing rooms a member of the ground staff just so happened to mention in passing that a cart of champagne bottles had been wheeled into the home side’s changing room.

Rob Baxter and Ali Hepher couldn’t look a gift-horse in the proverbial chops so when they relayed the message stone-faced to their already highly agitated forward pack, the reaction unanimous. This grandiose suggestion of a bacchanalian night of Bristol excess was way too presumptuous.

As the kick-off approached, forwards – including stalwarts Neil Clark and James Hanks – were bouncing off the walls and the backline had a steely look to them. Even though they held a narrow aggregate lead and despite the parochial chants of “Brissstolll, Brissstolll” reverberating around the old ground, they knew opportunity beckoned.

As history now tells us, the Chiefs romped home to a tub-thumping 29-10 victory with 24 points from the boot of Gareth Steenson and a try from Simon Alcott. At the final whistle, they had reason to collapse onto the soil with rictus grins. They were heading for the promised land.

Two starting members of that side that night were Tom Johnson, the eight-cap England back row, and long-serving Exeter Chiefs legend, Phil Dollman. For Johnson, what sticks in the memory is not the key moments of the game, but the emotional peaks and troughs.

“The week before we had narrowly won at home,” he told RugbyPass. “That was a huge win for us psychologically because we knew we could beat him. It gave us an edge. Of course, when our coaches mentioned they had seen a load of champers going into the Bristol changing room, we were absolutely raging. Another incentive was cash. Rob Baxter said at half-time, ‘There’s a grand on this game if you can bring it home’. Now when you’re on 25 grand in the Championship, that becomes a big, big deal.”

After nearly 250 games for Exeter, full-back Dollman said the night still sticks out as one of his favourite memories. “It’s funny, there’s not a lot that I can remember about the actual action but the little things stood out. As Tom said, the fact we had a little bonus riding on the outcome and the champagne being cold on ice.

“Put it this way, motivation wasn’t needed. Looking back, I don’t think it sunk in because we hit it hard for three or four days. I remember one of the boys damaged the trophy early on in a Dean Richards-John Jefferey situation and when we got back to the club that was the first and last free bar we’ve ever had at Sandy Park. Happy days.”

For Johnson, who retired in 2017 and is now working as a personal trainer alongside implementing health and well-being programmes for a large local property developer, the nostalgia induced by that night matures like a fine red.

“You don’t realise it at the time but ten years is a proper milestone. I only wish Amazon Prime or Netflix had been filming the rise of the Exeter Chiefs like they did with Michael Jordan’s The Last Dance. Seeing what the club has achieved since is an unbelievable story.” 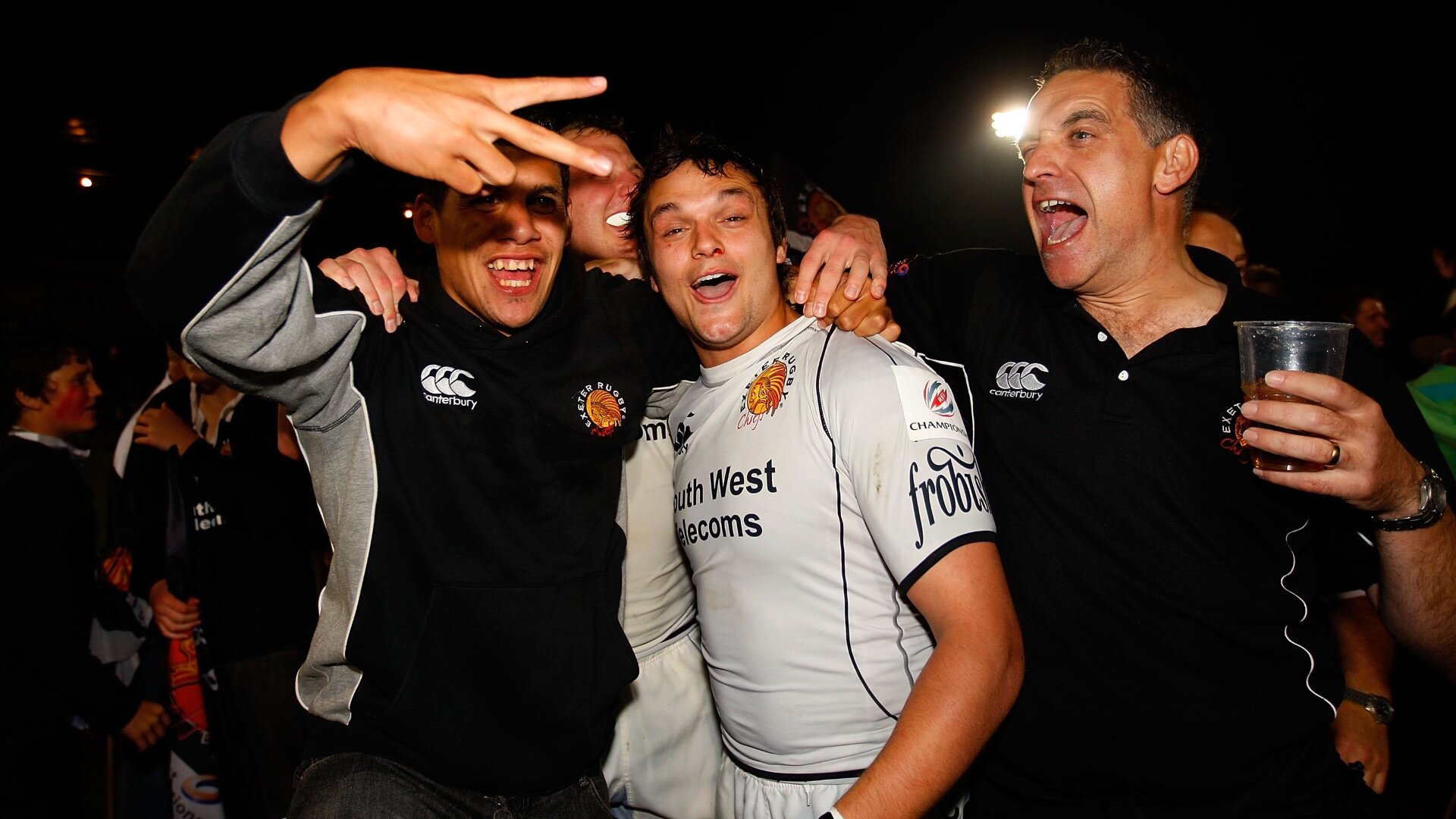 Now reaching the Indian summer in an Exeter stint in which he was Baxter’s first signing in 2009, Dollman said: “We had a Zoom chat about that night the other day and despite the crap chat from the boys, I loved it. If you look at the Exeter success over a decade, it looks like a big surprise, but we have been improving incrementally every year.”

The Welshman feels that confidence has been earned by the club having solid foundations and savvy management. “For a while after we came up, Exeter was seen as this place to go when your career’s run aground at a bigger club or you needed to prove a point. Well, now it’s no longer a stepping-stone, it’s a destination.

“Rob assesses the player’s character before he signs you and even though there is a small minority of players in the league who have big egos and can upset the environment, they get knocked in shape pretty quickly when they come here.”

Johnson concurs that it was fundamentally about having decent people involved in a club with an insatiable work ethic and a vision. He also admits luck played a part. “We had a bloody good plan but it also helped that it was the first year we had play-offs in the Championship. If it hadn’t been for them, we wouldn’t have been promoted.”

He's even tried on the boots he wore in the 2010 playoff… https://t.co/ini2WyKxCl

With the RFU announcing the playoffs in advance and the coaches working out the Chiefs would have to play 36 games in order to get promoted, it was decided to change tack. “It’s amazing what having a plan and everyone buying into it does. Players are usually flying after pre-season and playing fantastic rugby, but as the grind sets in they start to deteriorate towards the finishing point.

“To counter that the coaches inserted a three-week strength block around Christmas and rotated lots of players. The results dropped but there was no panic. By the time we faced Bristol in the final we had a psychological edge. We knew were in the best shape we could be in.”

While Exeter had long been known as a forwards dominated side, Johnson said that within days of the side’s promotion, Hepher was already thinking about a revolution in their playing style. The successful implementation of this has led them to be the highest try-scoring side in the Premiership in the last decade with 634 tries.

It’s something which elicits a chuckle from Johnson. “In those figures did they mention how many driving mauls or pick and goes we had? Seriously, I’d say Rob and especially Ali were ahead of their time. In the Championship, we had this mantra as a team of keeping it tight but in the pre-season after we got promoted that all changed.

We've only gone and done it! ??if Carlsberg did a team…… wouldn't want to experience this with any one else other than these #chiefs lads 1 and all!

“I’d never known anything like it. We didn’t do any mindless fitness sets. It was all about refining our skills. It was all, ‘attack, attack, attack’. Look at them now. They are so efficient. It’s all about visits to the red zone. They’re Mike Tyson-esque in relentlessly ploughing forward. Until someone stops them, they won’t change. Their mindset is awesome.”

With time for reflection of those heady Exeter days, both Dollman and Johnson are, perhaps unsurprisingly, still advocates for promotion after continuing rumours of Premiership intervention to hoist up the drawbridge.

Dollman, who played for Dragons in the Celtic League before joining Exeter, was particularly adamant it should be kept. “I’m slightly biased but having experienced the Magners League, there’s a staleness at the bottom when you’re not fighting for end-of-season honours. The motivation just ebbs away. In order to keep that interest up ideally you wouldn’t lock the league up. There are some great old clubs in the lower leagues and not giving them the opportunity to play Premiership again could cause a big split in English rugby.”

Johnson agreed. “Relegation is one of the things that keeps the league competitive. Without it, you may get more free-flowing rugby but the pressure adds excitement. If there are enough good teams to compete, it should stay open.” 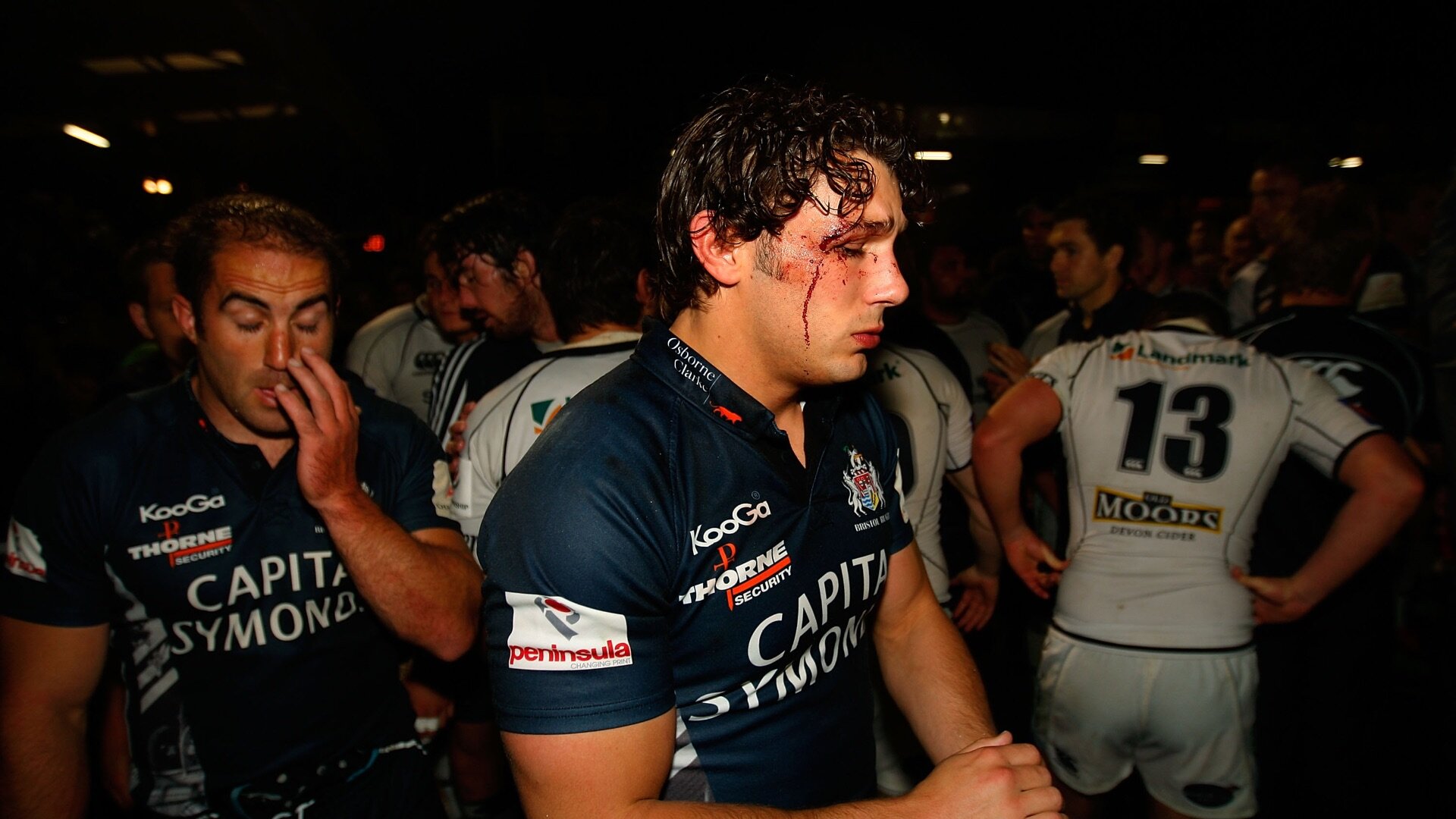 One side who has impressed Johnson in recent years is, ironically, Bristol. “It’s all well and good having the cash but you need to invest it sensibly. Bristol have a great coach, a clear ethos and play a good brand of rugby. You can’t just buy everything. We certainly didn’t at the Chiefs.”

Respect at club eventually meant Exeter became a side noticed by England after so long being seen as a West Country backwater. It was something that started with Johnson, who made his England debut in 2012, and was followed swiftly by Jack Nowell, Henry Slade and Luke Cowan-Dickie.

The Chiefs are now a side which regularly has world stars signing for them, Stuart Hogg, Santi Cordero and Alex Cuthbert to name but three. “I suppose I stumbled and tripped into the England set-up really but the timing for those boys was brilliant,” said Johnson.

“We were ready to move on from the promotion years. You have to give credit to the club for holding onto the best talent in the area in the academy. In a way, I was probably prouder with Ben Moon, who has had a more similar route to me, and maybe Harry Williams. In time, I’m hoping there are many more of them to come.”

What started at a slight over a crate of champagne has turned into a dynasty for the Chiefs. The next decade could prove just as fruitful.

'When our coaches mentioned they had seen a load of champers going into the Bristol changing room, we were absolutely raging'