Exeter moved back into the Gallagher Premiership play-off zone with a 19-12 victory over Sale Sharks at Sandy Park.

The Chiefs climbed to fourth, leap-frogging Gloucester and London Irish, after a controlled display highlighted by two tries from flanker Jacques Vermeulen.

It was Exeter’s fourth successive Premiership victory as Sale endured a difficult afternoon that saw them hit by a number of injury setbacks.

Even without their sizeable England contingent, Exeter dominated most of the contest, with wing Olly Woodburn also touching down, while fly-half Joe Simmonds kicked two conversions.

Chiefs will be frustrated, though, at their failure to increase a 19-0 lead, missing out on a bonus point, with the only second-half scoring being Sale tries from Ewan Ashman and Curtis Langdon, plus one AJ MacGinty conversion.

Vermeulen made his first appearance of the season for Exeter after twice undergoing surgery on an injured hamstring, while Scotland internationals Stuart Hogg and Sam Skinner returned from Guinness Six Nations duty. 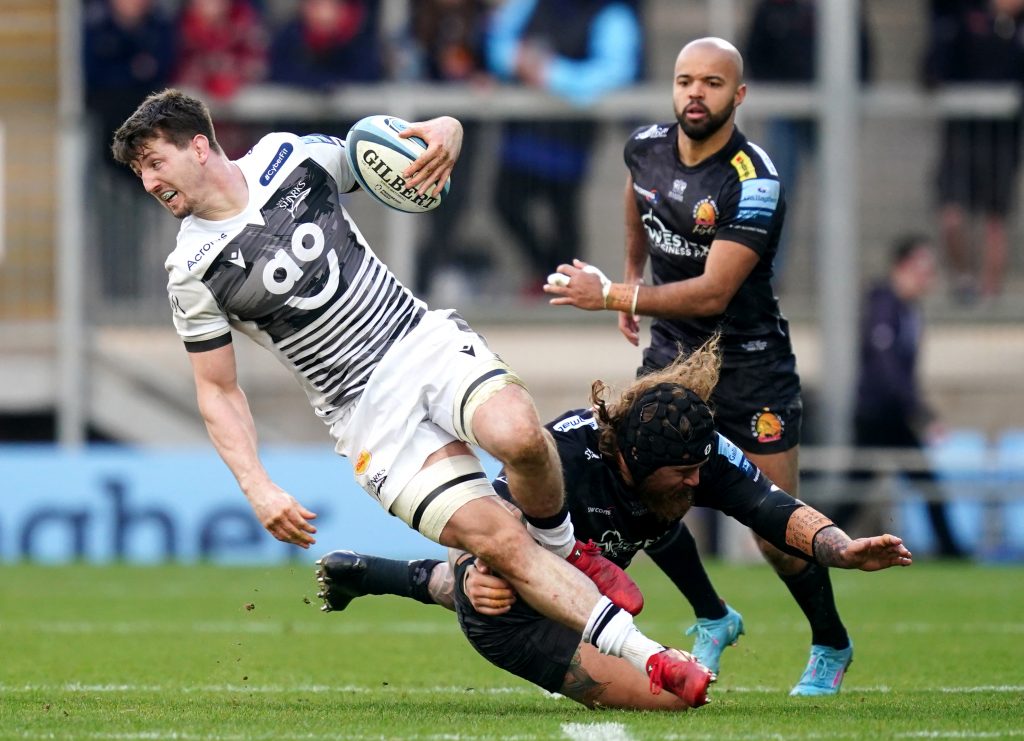 Exeter made a flying start in blustery conditions, taking the lead after just five minutes following Hogg’s initial counter-attack from deep inside his own half.

Tom O’Flaherty then ran strongly into the heart of Sale’s defence, before quickly recycled possession enabled his fellow wing Woodburn to finish off a flowing move, and Simmonds converted.

There was a vibrancy about Exeter’s play, with O’Flaherty and scrum-half Sam Maunder particularly threatening in terms of attacking intent, and Sale were stretched defensively to keep them out.

Exeter enjoyed unrelenting territorial dominance, and they increased their lead midway through the half after the forwards took charge.

Tarvis Knoyle has taken aim at Dragons head coach Dean Ryan during an appearance on a Welsh language television show in Wales over the weekend.

Sale could not escape from a position deep inside their 22, and the Chiefs expertly controlled lineout possession before Vermeulen touched down in the corner to open up a 12-0 advantage.

The visitors needed a response, but although they showed plenty of endeavour with limited ball, Sale could not create any clear-cut opportunities.

They also saw Wiese go off, while Quirke departed for a head injury assessment nine minutes before half-time and was replaced by South African World Cup winner Faf De Klerk.

Sale then lost Oosthuizen, before full-back Sam James received a yellow card for a deliberate knock-on and Sharks immediately conceded a third try.

Can we end this myth about @ExeterChiefs not being an entertaining watch?

Exeter’s pack again assumed close-range control, making sufficient in-roads for Vermeulen to claim his second touchdown, and Simmonds converted from the touchline as Exeter moved 19 points clear at the interval.

Sale’s problems showed no sign of abating, as Neild, who replaced Jono Ross at half-time, was carried off just six minutes into the second period.

But Sale regrouped impressively after such disruption, and they opened their account with a 52nd-minute try for Ashman that MacGinty converted to give the visitors hope.

Exeter went back on the offensive for most of the final quarter but could not add to their first-half try haul as O’Flaherty and Skinner saw late touchdowns ruled out.

And it was Sale that finished the stronger through Langdon’s score that gave them an unlikely losing bonus point.