Dai Young laments Wasps' collapse in front of 24,000 at the Ricoh

Wasps director of rugby Dai Young was bitterly disappointed to lose 28-22 to Harlequins after seeing his side throw away a 17-point lead.

In front of a crowd of over 24,000 at the Ricoh Arena, Wasps looked in total control when they built up a 17-0 advantage in the first quarter but then conceded 28 unanswered points to gift their opponents victory.

Quins responded with tries from James Chisholm, Kyle Sinckler, Elia Elia and Marcus Smith, who converted all four for a tally of 13 points.

Young said: “For the first period, I thought we were excellent as we were really dominant in all facets. We were very physical and won five turn-overs and when you go 17 points up, you think it’s probably job done.

“They then scored a soft try and the intensity went completely from our game. We struggled to get it back and it took us until 14 minutes from the end to spark it up again. 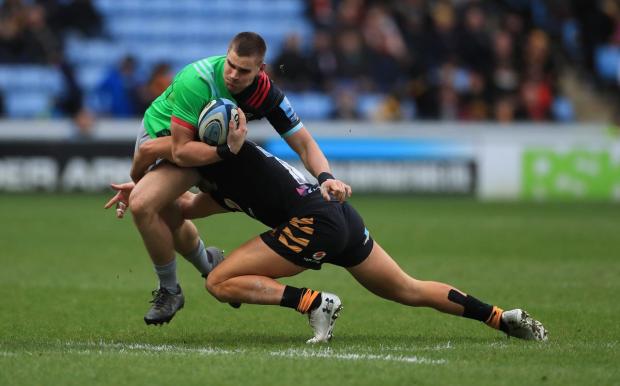 “It’s hugely disappointing as we lost all the collisions when Quins started to chase the game and the belief then started to drain from our players as their heads drop too easily when you should dust yourself down and come back strongly.

“It was a fantastic crowd and a fantastic occasion but the biggest emotion I have is letting the supporters down and we have to do better.”

It was a different story for Quins director of rugby Paul Gustard, who was elated to come away with a bonus-point victory.

He said: “It was a game of three-quarters for in the first quarter we were extremely poor as we regularly lost possession and dropped off tackles to concede 17 soft points.

“For the next 40 minutes, it was one-way traffic as our set-piece was on top throughout but then the final eight or nine minutes saw us nearly manage to grab defeat from the jaws of victory.

“We were under the cosh but fortunately Elia Elia managed to rip the ball from a maul at the end to save us.

“I thought our back row were excellent as last week at Ulster we were bullied and centre Paul Lasike also made a vital contribution as he gave us momentum.

“Marcus (Smith) kicked well to give us field position and to come away with a bonus-point win is a good leg up for the team.”