FOR SUPER RUGBY
You need to log in at:
liverugby.net
Go to liverugby.net
ADVERTISEMENT
Back
The Rugby Championship

'We don't train to tackle around the head... we've got to be better and tackle lower'

Australia recovered from the loss of Lachie Swinton – the first Wallabies debutant to be red-carded – as the hosts rebounded from a record defeat to win a chaotic Bledisloe Cup Test 24-22 over New Zealand in Brisbane.

Both sides were down to 14 men before halftime, with Swinton following All Blacks forward Ofa Tu’ungafasi to the sheds for near-identical high tackles.
But, fresh off a record 43-5 hiding in Sydney last week, it was the Wallabies who controlled the second half on Saturday to win a seventh-straight Test at Suncorp Stadium.

Makeshift No.10 Reece Hodge’s boot and a late Taniela Tupou try put the Wallabies up by nine, but it took a crushing Marika Koroibete tackle to snuff out the All Blacks’ hopes after New Zealand hit back with a 78th-minute try of their own.

Wallabies coach Dave Rennie was content to cop Swinton’s call after Tu’ungafasi had suffered the same fate for a similar offence, while captain Michael Hooper had no complaints ab out the dismissal.

“We don’t train to tackle around the head and we have to talk about player safety … we want players playing as long as we possibly can in this game,” Hooper said.

“If that’s the interpretation from up top, we’ve got to be better and tackle lower.”

Rennie was more concerned with celebrating a maiden victory after a draw and two heavy losses from his first three games in charge.

“We saw plenty of character out there; both sides, there were some curveballs. (I’m) really proud of the steel that we showed and the impact we got off the bench to seal the win.”

Winger Tom Wright landed the first blow of an action-packed match, scoring with his first touch in Test rugby.

His reward was to find himself on the receiving end of a thumping Tu’ungafasi challenge that initially brought pats on the back for the New Zealand forward. 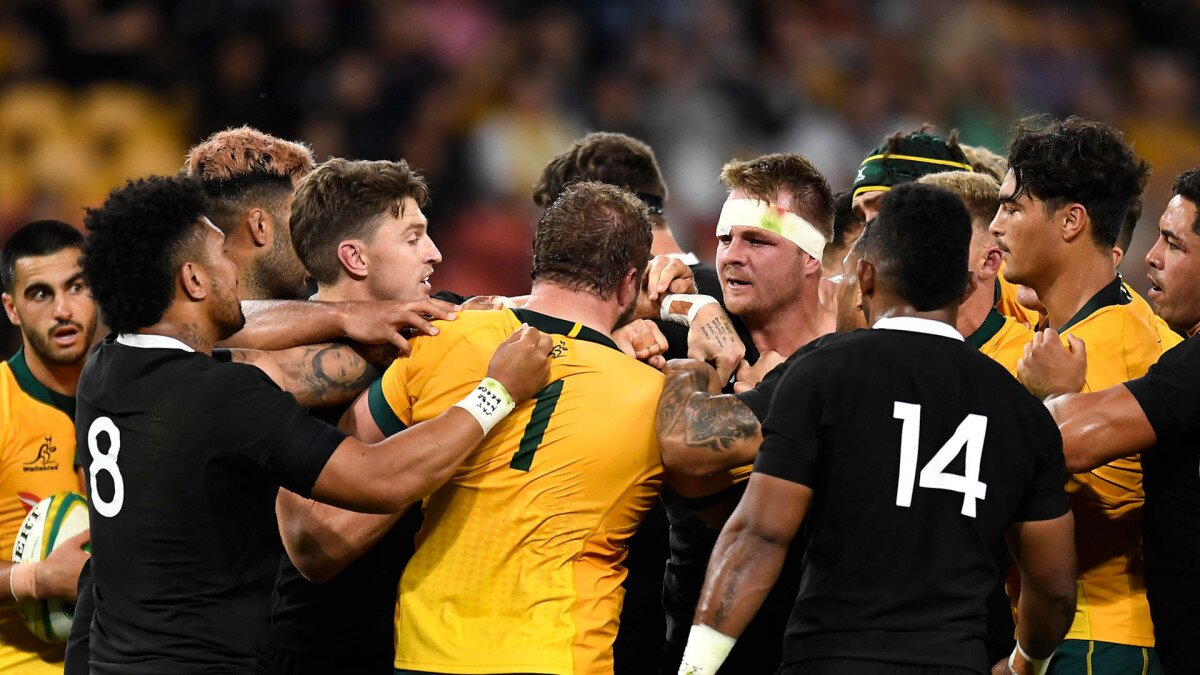 Replays showed Tu’ungafasi had hit Wright on the chin, though, with no mitigating factors leaving referee Nic Berry reaching for the red card in the 23rd minute.

It should have been the decisive advantage, but instead the Wallabies finished the half with one man fewer on the park than the All Blacks.

First debutant Swinton replicated Tu’ungafasi’s hit with a challenge on Sam Whitelock, except without any signs of his arms in the tackle, to recklessly earn a red of his own.

Then winger Koroibete was yellow-carded for a line-ball penalty that was deemed the final straw as the Wallabies desperately defended on halftime.

Hodge’s boot – he kicked five-of-seven for the night – kept the scores tight despite Codie Taylor’s try against the grain for the Kiwis.

The tide turned when New Zealand’s Scott Barrett found himself sin-binned for a ruck infringement, Hodge kicking the Wallabies clear before Tupou burrowed over and they hung on to salvage some pride in a 2-1-1 series loss.

What a result for the Wallabies #BledisloeCup pic.twitter.com/EPvfLmtslg

“It’s what we love about it, it throws up games like that after last week,” New Zealand coach Ian Foster said.

“It was a very disruptive game, didn’t flow. But (there was) a massive degree of intent from both teams to play, particularly in the circumstances with the cards.

“But they controlled the game better than us and are deserved winners.”

'We don't train to tackle around the head... we've got to be better and tackle lower'