Having enjoyed plenty of success at U20 level in recent years, England have had the luxury of an exciting pool of players to select from under both Stuart Lancaster and Eddie Jones.

The likes of Maro Itoje, Elliot Daly, Billy Vunipola, Kyle Sinckler and Anthony Watson are just a handful of players from the 2011-2014 period of English age-grade rugby who are now regulars in the senior squad and have played prominent roles in the improving fortunes of the national team since 2015.

The England U20s’ last title, in 2016, saw them thump Ireland in the final, but as of yet, it has failed to produce the same number of difference-makers at the senior level as their opponents that day, with Andrew Porter, James Ryan and Jacob Stockdale all playing valuable roles in Ireland’s Six Nations Grand Slam this year.

We look at the XV that took to the field against Ireland in 2016, see where they are now and what their international prospects look like moving forward.

The versatile fly-half/full-back is impressing in limited appearances at Saracens and has earned an extension to his contract in north London. Sitting behind Owen Farrell and Alex Lozowski on the depth chart is an unenviable position to be in, but he is progressing well and making the most of the opportunities that come his way. To really push for international recognition, he’ll either need to move club or supplant Lozowski as Farrell’s deputy.

Injuries have played their part in preventing Aspland-Robinson from making the breakthrough at Harlequins and now he has the exciting talent of Gabriel Ibitoye to compete with, as well as fellow senior academy members Max Coyle and Cadan Murley. If he can stay fit and feature in the Premiership, don’t rule out international caps in the future, but it’s currently a competitive position in English rugby.

Another Harlequins player who has suffered with injuries, although Marchant has already made the breakthrough into Quins’ first-choice XV. Injury denied him England caps during the summer tour of Argentina last summer, whilst another injury has marred his 2017/18 campaign, but he has been looking sharp since recovering from that in the last few weeks. Don’t rule him out from touring South Africa this summer with the seniors.

This powerful inside centre is on the radar of both Wales and Ireland, too, but what looked like a career destined for early England caps has been hindered somewhat by London Irish’s relegation to the Championship and their struggles this year back in the top tier. He hasn’t quite made the “leap” yet but is still a very talented player who offers something different to most of England’s options at 12. Expect him to leave Irish this summer should they be relegated to the Championship again.

Another player on the cusp for Saracens, with the versatile back-three player regularly impressing in the A League and the Anglo-Welsh Cup. The departure of Nathan Earle and the retirement of Chris Wyles has been mitigated by the arrivals of Alex Lewington and David Strettle, so it remains to be seen if more playing time will open up next season. With the depth of options Saracens have, he may be a player best suited to moving away for more playing time. 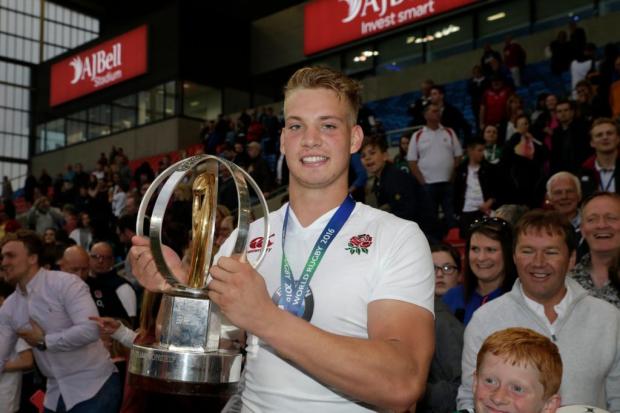 The, now, full-back has been involved in a couple of England training camps and will be well aware of what it is he needs to improve to see regular playing time with the senior side. His range, kicking game, handling and physical attributes are all very well-suited to playing full-back at the international level and if Northampton Saints can shore up his defensive work, then international caps are likely to follow.

Bath snapped up Green from Yorkshire Carnegie earlier this season but having just secured the signing of Will Chudley for next season, as well as retaining Kahn Fotuali’i, game time could be slim for the scrum-half. England’s nine jersey could be wide open after the 2019 Rugby World Cup, so Green has time on his side, but there are plenty of contenders to fill the spot, such as Dan Robson, Ben Spencer and Jack Maunder.

Like Mallinder, Boyce has been involved in larger England squads and is clearly highly thought of by Jones and the rest of the England coaching staff. He is moving into a more prominent role with Quins now, having made the move from Yorkshire Carnegie, but with the likes of Mako Vunipola, Joe Marler, Ellis Genge, Alec Hepburn and Beno Obano about, predicting England caps anytime soon would be bold.

A similar story to Boyce, really, with a mountain of competition to contend with for an England spot, such as Jamie George, Luke Cowan-Dickie, Tommy Taylor and Tom Dunn, not to mention current captain Dylan Hartley. Singleton did tour Argentina with England last summer, but Hartley played the full 80 minutes in both matches and the Worcester hooker remains, for now, uncapped.

The big tighthead is another player biding his time in the Saracens senior academy, with the likes of Vincent Koch and Juan Figallo ahead of him. Injuries have played their part in preventing him from making his breakthrough so far.

South has slowly risen through the ranks at Quins but is still largely resigned to opportunities in the A League and Anglo-Welsh Cup, the latter of which he put in performances of note this season and was shortlisted for the Breakthrough Player of the Year. English rugby is in fine fettle with its stock of locks and its hard to see a cap coming soon for South, for whom breaking into the regular Quins 23 will be the priority.

A player of some promise for Worcester a couple of years ago, opportunities have been limited for the hybrid second and back-rower. He has decided to try his luck with the Dragons next season and will, presumably, be bidding to make the senior Wales squad, for whom he is also eligible.

Like Taylor, Nott can shift easily between the second and back-rows and is also Welsh-qualified, but he has recently signed a new deal with Sale Sharks. One of the more mobile rear five forwards in the Premiership, Nott is a potential mismatch nightmare for defences. If Sale can continue to rise up the league and Nott can nail down a spot in the XV, his international stock will rise.

A player who may, were it not for injury, have an England cap already. Jones is a big fan of Evans and the openside has been on the Australian’s radar for a while now. A fractured eye socket has limited his opportunities for Leicester Tigers this season but if he can finish strongly and stay fit heading into the 2018/19 campaign, he is RWC bolter material.

Unfortunately for Chick, he hasn’t quite been able to make the breakthrough for Newcastle Falcons, with many teams at the Premiership level preferring the more dynamic options at No 8. He regularly impresses in the A League, Anglo-Welsh Cup and Challenge Cup, but has thus far struggled to break into the trio of Mark Wilson, Will Welch and Nili Latu.

Zach Mercer, in his first year of U20 eligibility in 2016, is currently right on the cusp of an England spot with Vunipola injured, whilst Wasps’ Jack Willis has been at the centre of a campaign for a call-up, such has been his form this season.

Ollie Thorley has been shining for Gloucester and can’t be too far off a call-up to an expanded England squad when he returns to fitness next season.

Theo Brophy Clews is developing into the kind of hybrid playmaker England rate in their midfield and may be another to leave Irish to pursue senior international ambitions, whilst Jack Walker has been beset by the worst injury luck since he made the move from Yorkshire Carnegie to Bath.