RUGBYPASS+ Have Saracens reminded Eddie Jones what England have been missing?

By Nick Bishop
Have Saracens reminded Eddie Jones what England have been missing?
By
Nick Bishop
1 month ago
Gallagher PremiershipEnglandSaracens
3:53pm, 02 November 2022 Go to comments

It’s been a tough couple of years for fortune-tellers in the English Premiership. Wind the clock back only sixteen months, to the 2021-22 season finale: Harlequins were beating the Exeter Chiefs by 40 points to 38. It was a glorious, sun-soaked 11-try smorgasbord. A feast for the attacking gods and all who believe in them.

Four months ago, the situation was comprehensively reversed in the 2021-22 final, with the top two defensive sides in the league – Leicester Tigers and Saracens – slogging it out in a duel which was niggardly to the point of starvation with ball in hand.

The two sides kicked the ball in open play 105 times between them – that’s one kick for every 45 seconds of play. Only two tries were scored, and both of the attack-minded clubs (Harlequins and Northampton Saints) were defeated at the semi-final stage of the competition.

It has all made the casting of the runes much harder to decipher for England head coach Eddie Jones. Jones thrives on identifying new trends earlier than his rivals, in order to shape his charges accordingly and stay ahead of the game.

After the Quins triumph in 2021, Eddie abandoned the rump of the Saracens players who had provided the spine of the side which advanced to the 2019 World Cup final in Yokohama. Established stars like the Vunipola brothers, Mako and Billy, plus hooker Jamie George, utility back Elliott Daly and Leicester outside-half George Ford were all discarded, and upwardly-mobile squad members like Ben Earl and Alex Lozowski were flushed out with them.

An ominous warning pealed out from the ex-Randwick man before the November tours last year:

“We now have a number of players who’ve been through two World Cup campaigns.

“With the third World Cup campaign, my experience tells me that some players can want to go to the World Cup, but they don’t really have the will to prepare to win the World Cup.

“It did strike me the experience I had with Australia, post 2003. I kept some players on longer than I should have, and that’s probably weighed in the selection choices that I’ve made in the last six months with England.

“One of the things I’m looking at is those players who’ve already been to two World Cups, whether they’ve got the will to prepare to win.

“We could have the most experienced side at the World Cup but whether they’ve got that will to go that extra 10 per cent and find that discretionary effort… that’s something I’m trying to find out at the moment.”

The truth is that the new generational graft has not taken, at least not in the spine of the starting XV.

Young Harlequins playmaker Marcus Smith was anointed as the new king at number 10, and it seemed to be odds-on that he would tow in his principal partner-in-crime Alex Dombrandt at number 8, and even Danny Care at 9 in the axis of the team.

It has not worked out like that at all. Although Smith has been given a consistent run as a starter, England only scored three tries in the four games that mattered in the 2022 Six Nations, and finished with the moral ‘wooden spoon’ of a losing season. Care has been recycled, then abandoned after a couple of starts in Australia, while Eddie has worked through no less than four different number 8s over the last 12 months. Sam Simmonds, Tom Curry and Alex Dombrandt have all had a shot, and the loop was only closed when Jones went all the way back to Billy Vunipola for the July tour.

The truth is that the new generational graft has not taken, at least not in the spine of the starting XV. Big Billy was back at 8 down under and Jamie George quickly re-established his credentials as the top hooker. No definite replacement has yet been found for 117-cap Ben Youngs at scrum-half, and he is in the current end-of-year tour squad. Whispers from the grapevine even hinted that the mercurial Marcus might come under pressure for his starting job from Owen Farrell, and the ‘Smarrell’ experiment, with the pair playing together, ditched.

The red and black is back, and it is back in a big way in England selection terms. When the club’s key players were initially left out in the cold, one of those omitted, flanker Ben Earl, commented:

“Everyone [at Saracens] has been so enthusiastic to prove everyone wrong – both media, coaches, whatever – so it’s a good place to be and selfishly, it’s good news for the club. We’re used to not having two or three of those players and now we’ve got them and our team looks completely different.”

There are concrete reasons why the club has become so much more attractive to Eddie Jones as a selection base. Since losing to Leicester in the Premiership final slugfest, the club’s playing approach has undergone a huge volte-face. In particular, the attitude to the space in between the two 40-metre lines has changed completely.

There were 105 kicks in the 2022 Premiership final. That astronomical number was the outcome of both teams regarding the middle third of the field as an area from which to launch high kicks. There has been a sea-change in Saracens’ attitude this season. Take a look at the raw stats up to week seven:

On top of the collective stats, there are some individual statistics of great interest too:

The stats contain all of the clues which transformed a 15-12 loss in June into a 51-points-to-18 thrashing of the same opponents four months later. 47 kicks in the 2022 final dropped to 20 in October, and a failure to cross the whitewash to the bounty of seven tries. Its’s no wonder Tigers coach Steve Borthwick called Saracens the “standard-bearers” of English rugby afterwards.

Saracens used to pick a pack with giant back five forwards … Now they have a genuine linking number 7 in Ben Earl and big Billy looks to offload almost as much as he goes to ground to recycle quick ball at the ruck.

Don’t lend credence to those who would have you believe that this is a natural evolution of the Saracens’ existing game. It is revolution, not evolution. The club has brought their back three out from a dark background of forbidding defensive excellence into the sunlight, to be at the attacking forefront of their game.

Saracens used to pick a pack with giant back five forwards – so big that an international second row (Maro Itoje) was forced to the blind-side by Will Skelton, and found himself in the company of two natural number 8s (Billy Vunipola and Jackson Wray) when he arrived. Now they have a genuine linking number 7 in Ben Earl and big Billy looks to offload almost as much as he goes to ground to recycle quick ball at the ruck.

Where Saracens used to kick ball away automatically in between the two 40s, now they look to run and pass from positions even deeper in their own end. All of their key breaks in the first half of the ‘revenge match’ at the StoneX stadium originated from a long attacking field: 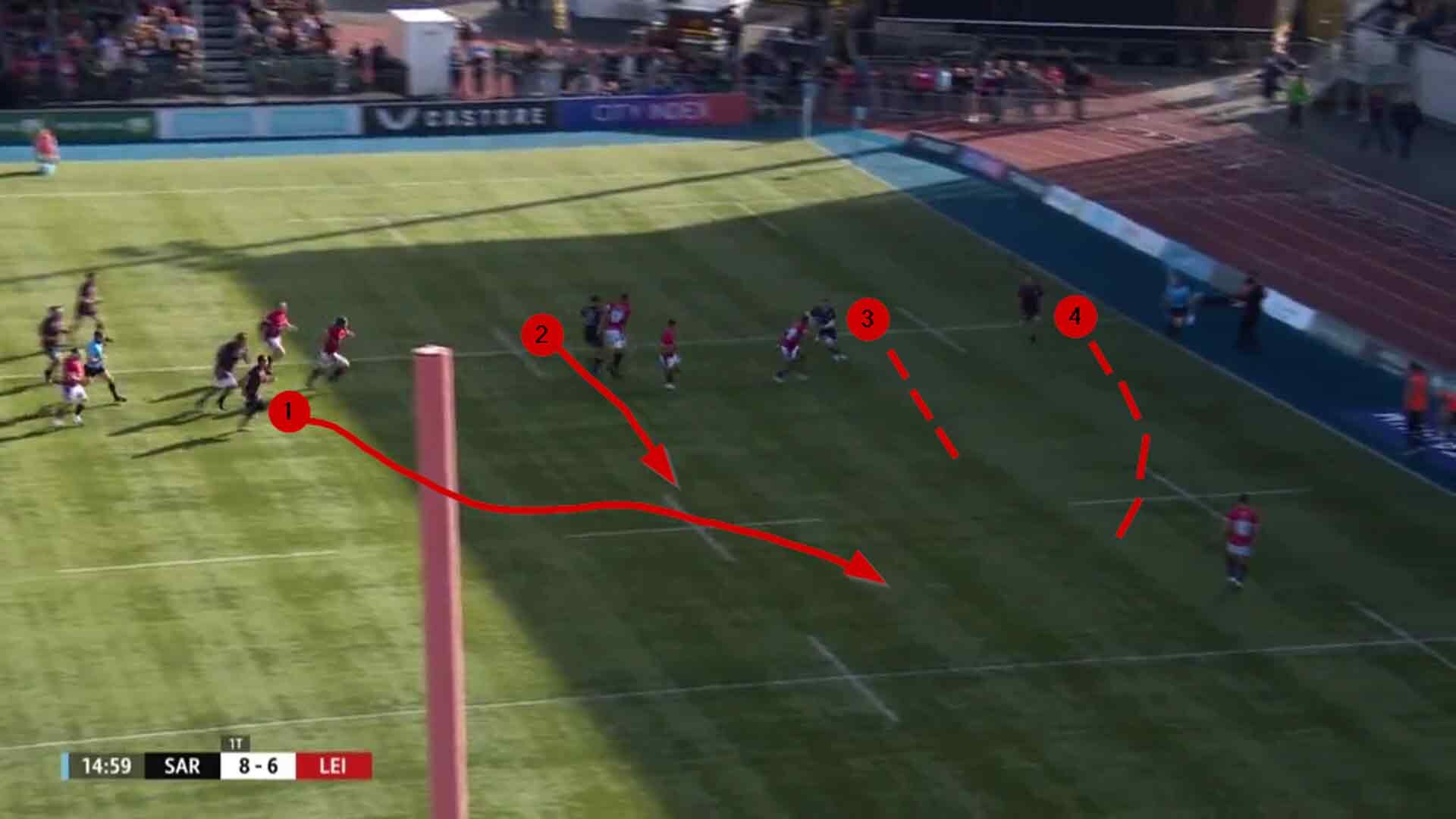 The attack from just outside the Saracens 22 connects three backs, all with extensive experience of playing first receiver: England outside-half Owen Farrell, underestimated number 13 Alex Lozowski and Elliot Daly from fullback. They create the space for Lewington on the edge, while the screenshot illustrates how the red and black are now geared for long-range attack. Their scrumhalf Ivan van Zyl is already running a long diagonal support line to pick up Lewington and Lozowski moves straight upfield to provide the final link in the chain.

The second try of the game originated from a scrum on the Sarries’ 40m line:

Once again, the play starts by connecting Farrell directly with Daly and the play-side wing (Malins). The finish showed how functions in the back row have changed to accommodate more ball movement:

Instead of automatically looking to squeeze every last metre out of contact, Billy Vunipola turns to offload in the tackle to Farrell (his second offload in the sequence as a whole) and Earl is positioned out wide to pick up the shrapnel from Malins’ kick ahead. This is not a role for which previous iterations of the Saracens’ number 7 were equipped to play:

Earl was on the end of another flowing Saracens move in the 23rd minute of the first half: 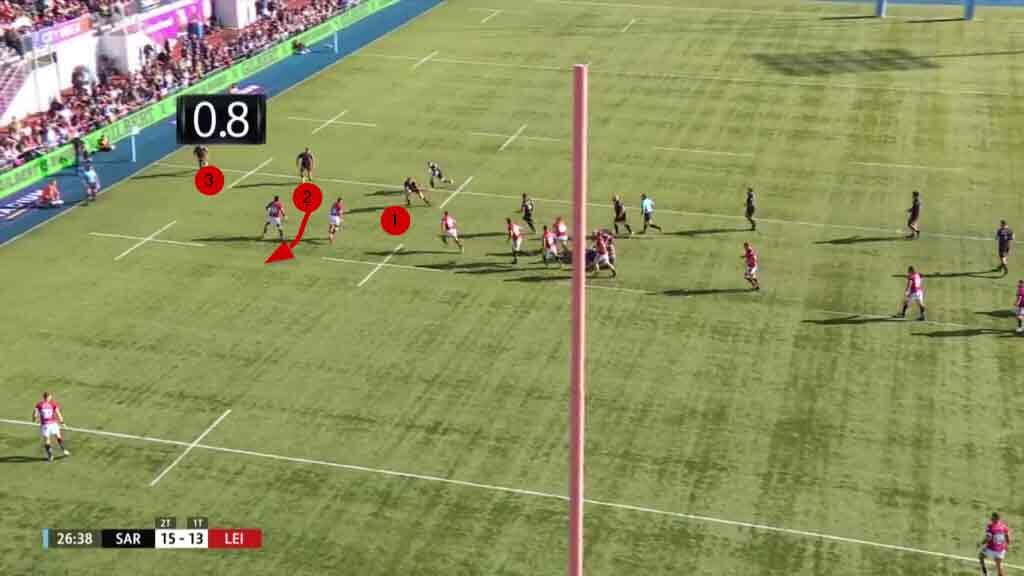 If big Billy is not offloading, chances are he is presenting lightning-quick ball, as the big 0.8-second legend indicates – that is the amount of time it takes to get the ball from placement at ruck-time to pass from the base. The ball is so quick that Saracens can even afford the luxury of a bounced pass from van Zyl before Farrell and Daly release Earl.

Yet another score derived from a kick return starting from the Saracens’ 30m line:

Interplay between Daly and Malins manufactures the initial breach, and a beautiful left-hand pass from Farrell to Jamie George at the line, with Malins in support, finishes it.

Saracens have hauled themselves back into the spotlight of England selection by transforming their style of play. They have three forwards in the squad: Mako and Billy Vunipola and Maro Itoje, and two others who would have been but for injury, in George and Nick Isiekwe. Ben Earl has done all he can to deserve the nod from Eddie amid a glut of good number 7s. Owen Farrell and Max Malins in the backs probably deserved to be joined by Elliott Daly and Alex Lozowski.

The defensive ‘Monsters of the Midway’ learned their lessons from June and applied them when they played Leicester for a second time in October. They changed their attitude to what was possible in between the two 40m lines and involved their back three players as attacking weapons far more often than even the top offensive sides in the league. It is just what Eddie Jones needs before the World Cup.