Scotland's madcap, glorious truth? This was no heist

At the end of it all, rain lashing at his brow and pride erupting in his heart, Stuart Hogg sank to his haunches and stared into the ether, shaking his head and grinning at the sheer enormity of what his Scotland team had just achieved.

At long last, the Twickenham ramparts had been stormed. The empty, cavernous bowl reverberated with the screams of a gaggle of berserk Scotsmen. Saturday was extraordinary for so many reasons – the surreal ease with which Scotland bossed one of rugby’s greatest teams; the deserted seats in sharp contrast to the bonkerdom of the celebrations on the turf; the thunderous banishing of a hoodoo that has stretched nearly forty years.

Every time this fixture comes around, the spectre of 1983 looms. The last time Scotland ventured south to Twickenham and returned home triumphant. Every other season, the television packages, the press conferences, the column inches – the whole narrative – is shaped by the bleak history of Scottish doom. Twickenham was their haunted house, a graveyard of ghosts and despair. No longer.

In that moment, as he squatted in the deluge, Hogg was like a schoolboy who had just gotten away with setting off the fire alarm; an artist who had pulled off his greatest performance; a bank robber escaping with his bounty.

But this was no heist. Scotland dominated every facet of the game and the five-point margin of victory is not a true reflection of their supremacy. 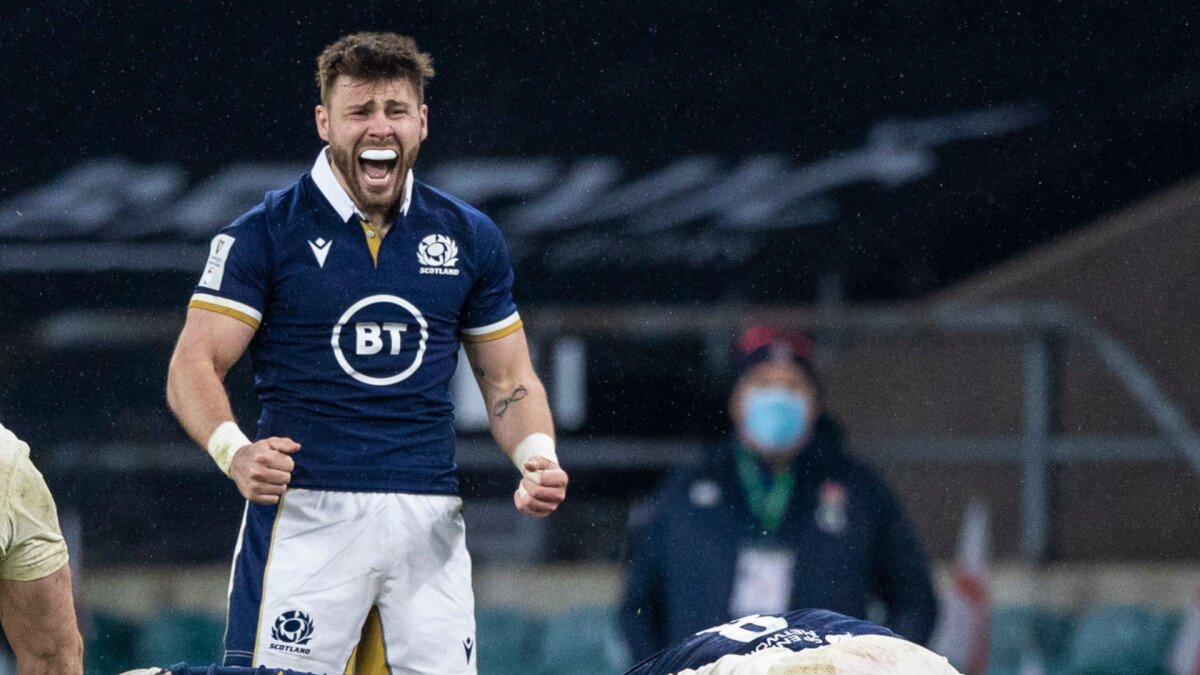 In analysing the performance, you could name-check every member of the Scottish squad. Nobody underperformed. If pressed to speak about the stars of the show, you’d go to Hamish Watson, a true colossus at the breakdown who bested the much-vaunted Tom Curry, scrapped and hounded and bludgeoned England into all manner of strife. It is fitting that Watson, like a wolf pouncing on a lemming, grappled the ball back with the clock red and laced it into the stand.

Jonny Gray, too, was an immense performer. It is easy – too easy – to take his unremitting excellence for granted. Because Gray routinely makes 20+ tackles and 20+ carries a game, such numbers cease to become remarkable. He is a victim of his own relentlessness and he was utterly brilliant on Saturday. Since joining Exeter Chiefs, Gray has added telling little subtleties to his play that make him a horrible opponent to quell, and more snarl on the carry. He was the game’s premier second row.

Alongside Gray, Scott Cummings was an athletic powerhouse. Rory Sutherland and Zander Fagerson scrummaged well and showed up strongly in the close-quarter skirmishes. Matt Fagerson, still just 22, was a dynamic brute with ball in hand.

George Turner came in to 2021 as Scotland’s third-choice hooker, and then both Stuart McInally and Fraser Brown were struck down. Doubts were raised about his throwing, and how it might crumble in the white-hot arena of Twickenham with a yelling and flapping Maro Itoje filling his vision. Scotland did not lose a single of their fifteen line-outs. Turner carried like a beast.

The story of Cam Redpath and his toing and froing between Scotland and England dominated the coverage in the week. At 21, on his Scotland debut, the Bath centre swaggered around like a centurion. Hogg infused his usual display of booming spiral punts and shrewd decision-making with a little of the flair that Scotland need to produce more. Few wingers would finish from the position where Duhan van der Merwe smashed his way across for the only try of the Test. The hulking Edinburgh man is a tremendous and rare attacking weapon. Finn Russell blew more hot than cold, but despite his magnificence, he has work to do to convince Warren Gatland he is a Lions Test 10.

In the coaching box, Shaun Edwards is lavished with praise for his work as the game’s premier defence man, and for the outstanding job he is doing with France. But Steve Tandy deserves huge recognition what he has achieved in Scotland. Since being hired before last year’s Six Nations, Tandy has instilled a new defensive system that has made the team fiendishly hard to penetrate when they are on their game. They had the best defence in the 2020 edition and they are the first team to restrict England to six points or fewer in eight years. Twelve, if you only count home matches. And, as pointed out by journalist Robert Rees on Twitter, the last time England scored six or fewer at home in a championship match was in 1988. 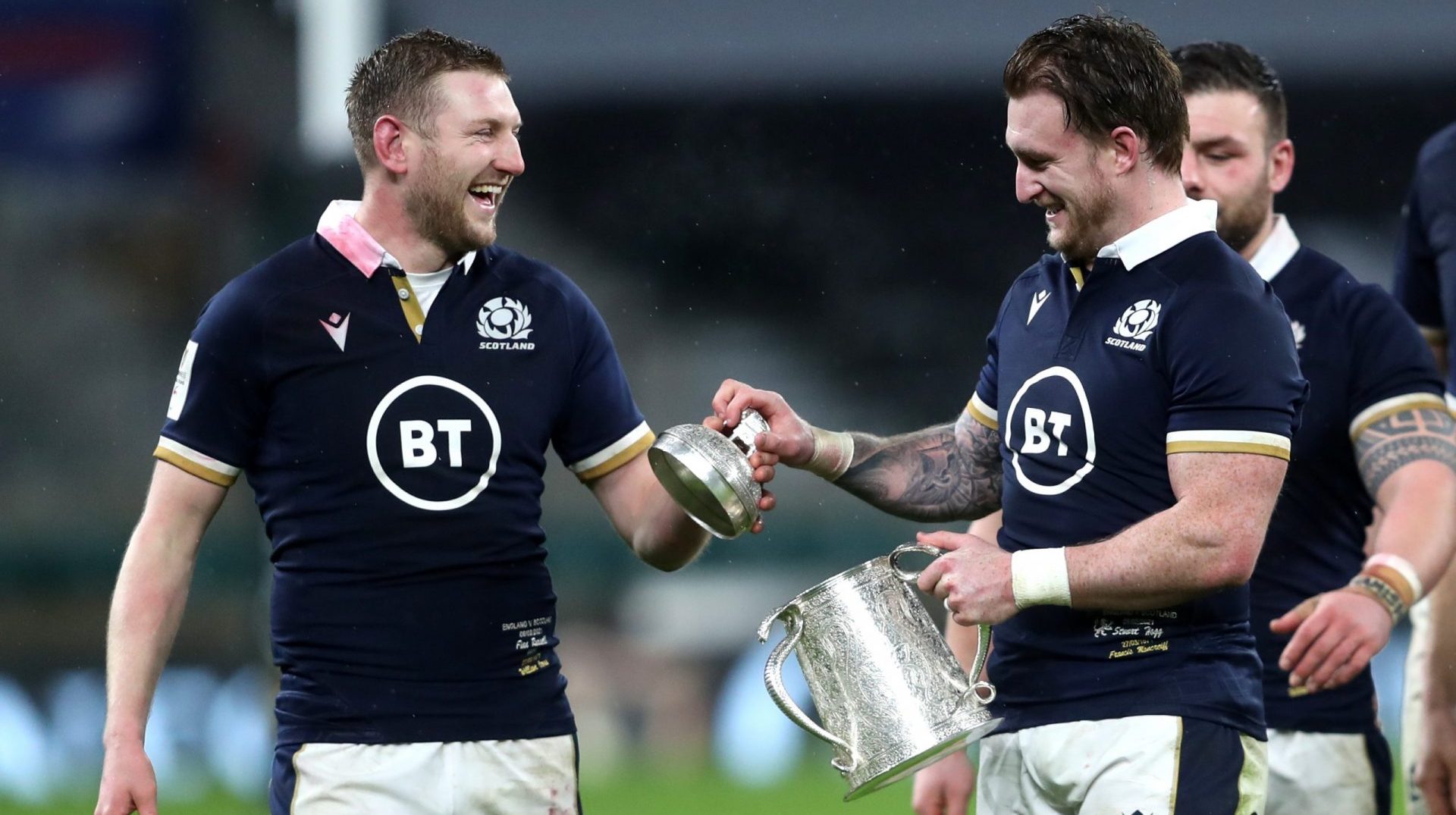 Townsend is all about the collective over the individual, but he must allow himself a moment of self-satisfaction. After the horrors of the World Cup, there were plenty calls for him to lose his job. Since then, he has led Scotland to a win over France, a first victory in Wales since 2002, and this maiden triumph at Twickenham for 38 years.

He has entirely reinvented Scotland’s style of play from the ‘fastest rugby in the world’ that defined the early part of his reign. And, you fashion, he had to accept that his blueprint – indeed, the very way he feels the game should be played – was not working. That cannot have been easy. Townsend has evolved and so has his team.

When you look at the match more closely, the numbers are astonishing. In the Six Nations era, Scotland have conceded an average of 38 points per Calcutta Cup match at Twickenham. On Saturday, they shipped six.

When did England last fail to make a single line break in a Test match – any Test match – let alone one at home against a team they habitually batter? When were they starved of ball so suppressively, to the extent they finished with 37% possession? They were forced to make 192 tackles – nearly twice as many as the Scots. They leaked 15 penalties and Scotland should have punished their indiscipline with more scores.

And that’s the madcap truth – it should have been more. As insane as it sounds, there were tries out there that Scotland could not take and opportunities they squandered to squeeze the last air from English lungs. For all that England had possession and a chance to win it with the clock red, there was never any real sense of impending doom, nor even the merest indication that they might have it in them to score a try.

England were poor, no doubt. In five years under Eddie Jones, they may never have played so meekly, looked so hopelessly bereft of ideas in the face of ravenous defence. Their deadly strike runners barely touched the ball. They were shorn of big players, but for a country of such rich resources, that is no excuse. Jones will shoulder the public blame for it all, but in private, he must be asking serious questions of his men. England were miles off it in so many areas.

But this, emphatically, was Scotland’s day. Townsend’s day. The coach was nine years old when Twickenham was last ransacked. Scores of players have come on to the scene, embarked on long and distinguished careers, and retired without making it happen. Gavin Hastings, Chris Paterson, Gary Armstrong, Tom Smith, Rob Wainwright, Simon Taylor, Finlay Calder, John Barclay, David Sole, John Jeffrey, Alan Tait – these are giants of the Scottish game. Some were Grand Slam winners. Some were Five Nations champions. Some, victorious Lions. None of them tasted the sweet nectar of victory at Twickenham. That is the scale of what Scotland have done.

At last, we can all shut up about 1983 and the slew of shellackings, heartache and general torture that has transpired since. The future for this Scotland team is bright. The Lions tour, if it happens, is a realistic carrot for a good chunk of them, but it will take more than one humdinger against a ghost of an England side to compel Gatland. Their English, Welsh, and Irish counterparts have been racking up the performances, victories and trophies for a huge while longer.

Still, this tournament hasn’t opened up so much as been blown apart with a bazooka, such is the magnitude of Scotland’s glory. Wales at home come next for, and while they will now be seen as favourites, Wayne Pivac has a team laden with champions and Lions. There is a long and arduous road ahead, but for Scotland, the opportunities now are exhilarating.

Scotland's madcap, glorious truth? This was no heist

'It was an incredible debut' Next