By Nick Bishop
The time has come for Eddie Jones to make a pivotal call
By
Nick Bishop
1 year ago
Gallagher PremiershipEnglandHarlequins
6:32am, 15 October 2021 7 Comments

A great deal of water has flowed under the bridge since November 2019, when the Saracens club was fined, and then relegated to the second tier of the English domestic game for breaches of the salary cap.

In June 2020 the laws at the breakdown were tweaked to produce quicker resolutions at the ruck, and the young referees in the English Premiership embraced them enthusiastically. The top four officials (Wayne Barnes, Matt Carley, Luke Pearce and Karl Dickson) only average 37 years of age, scarcely older than a senior player. Others, like Craig Maxwell-Keys, are even younger at 31.

The mix of accelerated ruck ball and younger, well-conditioned referees created a much faster game as the play-offs approached, with four of the best attacking teams in the league (Harlequins, Exeter, Bristol and Northampton) finishing in the top five spots.

The three play-off matches produced an average of 76 points and over 10 tries per game, and generated the most thrilling spectacle anyone could remember in the final between Exeter Chiefs and Harlequins, a game won at the death, 40-38, by the men from the Stoop.

Now Saracens are back in the top flight to stay with the league ring-fenced from any further relegation, and there is a struggle brewing for the spiritual soul of English professional rugby.

On the other, there are the Cavaliers: sides like Quins, Chiefs and Saints who often have a significant Southern Hemisphere coaching input and are almost entirely free of the Saracens coaching provenance. All three tend to have a far more positive mind-set: to play their rugby with the ball, rather than without it.

There will be a very uncivil war, make no mistake – and many of the resolutions will lie with England head coach Eddie Jones. The fate of the English professional game is about to be decided.

Two games involving Bristol Bears from the current 2021-2022 season illustrate the sheer scale of the contrast. Against Saracens in round one, there were 86 kicks between the two teams in open play (50 before half-time) and only one try scored. Versus Harlequins in round four, the kicking total dropped to 37 and there were 11 tries scored (three by the Bears and eight by Quins). You could be forgiven for believing the two matches were played under an entirely different set of rules.

Eddie Jones has a big part to play in the mediation and resolution process, and especially in his choices at two key spinal positions in his England team – at number 8 and at number 10. Those spots will more than likely mean a direct competition between Saracens and Harlequins players: Billy Vunipola and Alex Dombrandt at number 8, and Owen Farrell and Marcus Smith at number 10.

Eddie Jones now has to make a definite decision on how he wants to connect with his England players via an agreed playing philosophy, and the choice at number 10, in particular, will be pivotal to his judgement.

The two clubs do not agree on much. Philosophically, they are worlds apart. Saracens have had an artificial pitch laid at Allianz Park, Quins prop Joe Marler recently called for them to be banned. He immediately received the support of two Chiefs players, Henry Slade and Jack Nowell.

One notable ex-Saracens and England coach, Paul Gustard, attempted to transplant to the Stoop but it did not work out well. ‘Guzzy’ left the club suddenly at the start of 2021, six months before the end of his contract. As scrum-half Danny Care explained, “The club have made the decision that Guzzy wasn’t a part of their plans and, mutually, I think they decided the best thing was for him to leave straight away.”

The Saracens graft simply would not take. Upon Gustard’s departure, Harlequins went from seventh in the EP in late January to winners of the entire competition by the end of June.

Eddie Jones now has to make a definite decision on how he wants to connect with his England players via an agreed playing philosophy, and the choice at number 10, in particular, will be pivotal to his judgement.

The wise old head is Owen Farrell, a veteran of three Lions’ tours and closing in on 100 caps for his country. The new kid on the block is Marcus Smith. Where Farrell spends more time in the pocket behind a protective screen of forwards, utilizing the kicking game to navigate up and down the field, Smith prefers to attack with ball in hand from his spot at first receiver.

If that is an over-simplification, it is one justified by the recent Wallabies resurrection of Quade Cooper at the ripe age of 33. Cooper has never been a ‘pocket’ navigator at number 10, and he foresees a big change in the modern game:

“If you look at number 10’s around the world now, you’ve got Finn Russell, Marcus Smith, Beauden Barrett, Richie Mo’unga.

“Electric, entertaining players who have a skill-set other than just standing in the pocket and kicking the ball. It’s only over the last five or so years that those guys are getting respect and their faces are starting to fit.

“Maybe before, you would be written off as a maverick who is unreliable. The more those guys are empowered and the more they continue to grow, the more kids will come through and want to play like them.

“The media and current players need to get behind these players and support them, rather than smash them and bury them if they have one bad game.

“Hopefully I will play against Marcus Smith one day, but either way I’ll continue to love the work he does.”

The emergence of the new breed of number 10 Quade describes has been stimulated by the 2020 breakdown guidelines, which have encouraged the production of a greater proportion of lightning-quick, 1-2 second ball (LQB).

First receivers who can stand much closer to the ad-line have become more important. The number 12 position is likewise beginning to harden up, with powerful ball-carriers preferred to extra playmakers.

The Wallabies have Quade Cooper at 10 and giant Samu Kerevi at 12. Quins pick Marcus Smith with the equally large Springbok André Esterhuizen beside him, and Esterhuizen tips the scales at 115 kilos. Both are used as the first receiver on set plays from scrum and lineout:

These examples both came from games against the Bristol Bears – the first the Premiership 2020-21 semi-final, the second a regular season match played last Friday.

The matches had a remarkable similarity, with Bristol getting out to big lead early (21-0 last weekend, 28-0 in the semi-final) only for Harlequins to reel them back in. In the recent game at the Stoop, Marcus Smith came off the pine in the 26th minute, and his side proceeded to score 52 of the next 55 points to bring the victory home.

In both instances, Marcus Smith starts the play outside his number 12 (Australian Ben Tapuai in the semi-final, Esterhuizen in the league game). In phase play, he will stand much closer to the pod of three forwards ahead of him, in order to threaten the defence more immediately: 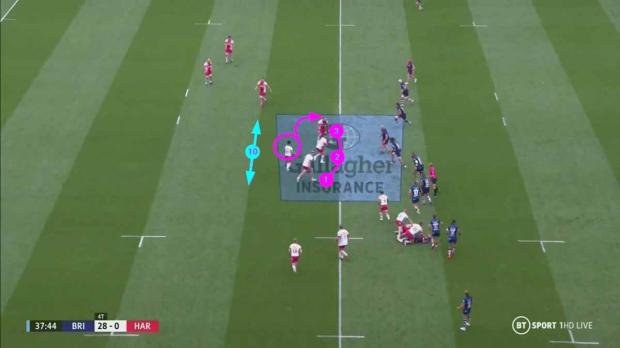 A ‘pocket’ number 10 would typically be positioned about two or three metres further back (in the blue spot) to keep the strategic kicking option open:

Again, one example from each game. In both cases, Smith is making the pass or offload so close to the advantage-line that there is no space or time for the defence to recover once the break has been made.

When the forward pods have been consumed on previous phases, Smith will step up ahead of the rest of the attack: No more than five metres separates Smith from the hindmost foot at the preceding ruck, and that means the penultimate Bristol defender cannot hope to recover once he steps out of the line. Quins are through it before he can even think about second-guessing himself, and that stems from Smith’s aggressive positioning.

The same theme was repeated in last season’s terrific Premiership final between Harlequins and Exeter:

In both cases, the reaction time of the forward defenders opposite Smith is reduced to a bare minimum. Less reaction time means more decisive outcomes for the attack.

As with Scotland’s Finn Russell, the kicking game is also executed right on the ad-line rather than from deep in the pocket:

Both kicks are made when the D is on top of the kicker, no more than a metre away, and not hedging off towards the backfield. The thrust, when it comes, is therefore fatal – a dagger to the heart.

Looking ahead to the upcoming international, there is far more at stake in the selection of players like Marcus Smith and Alex Dombrandt for Eddie’s England than meets the eye. If he picks both, it will mean a significant change of course from the Saracens-dominated style of the two seasons since the 2019 World Cup.

The choice between Billy Vunipola and Dombrandt at number 8, and between Owen Farrell and Smith at number 10, is ultimately a choice between a defence/chase/kicking oriented strategy and a ball-in-hand attacking policy, between Roundhead and Cavalier.

Questions abound: will Saracens’ return to the top tier of English rugby persuade other Premiership sides to follow their lead? Will the success of Quins and Bristol persuade them otherwise? Where does Eddie Jones really stand in the debate? Will he trust his time at Saracens in England (2007-2009) or the Brumbies in Australia (1998-2001) to provide the background to his selections?

It is a critical crossroads for all concerned. One thing is for certain: there is not much doubt who the new Quade Cooper would pick for the England number 10 jersey. It would be Marcus Smith, hands down.