Empty stadiums a fleeting situation? Next
Back
Gallagher Premiership

Worcester Warriors are not a glamourous team and if your hope is to see them as such, you are likely to remain disappointed for the foreseeable future.

They do not have the history of some of the more prestigious clubs nor have they been consistently challenging in the upper echelons of the Gallagher Premiership. Worcester, though a fine place to live, lacks the cosmopolitan lure of London, the vibrancy of Newcastle or Leicester, or the array of attractions on offer in places such as Bath and Exeter.

For the majority of the past 10 or so years, Worcester Warriors have been seen as a club that produces talent, but ultimately ends up losing it. A club that is a stopping gap in a player’s career, rather than a sought-after destination for rugby’s biggest free agents.

Director of Rugby Alan Solomons is doing his best to address and reverse that trend, though it is no overnight project.

Club academy product Ted Hill has taken on the captaincy at 21 years of age and committed his future to the side. He has been joined by new signing Billy Searle, a player Solomons will hope that he can build around at the crucial 10 position for a number of years, as well as the returning Matt Kvesic. The likes of Nic Schonert and Francois Hougaard have added quality in recent years, whilst Chris Pennell, when he eventually hangs up his boots, will go down as one of the best to ever grace Sixways Stadium.

It is clearly not a club without talented players, though it is also true that Worcester are not a side currently setting the world alight. If there were a word to describe the side, you would not go too far wrong with ‘workmanlike’, and that is no criticism.

Solomons is attempting to instil a resilience and toughness to Worcester that has been missing in recent years and that is embodied by the uncompromising nature of Hill, who did not look out of place leading his boyhood club on Saturday against Gloucester, not least so when he was diving over for a try in the first minute of the game.

A moment of madness in the first half from Melani Nanai that saw the Samoan wing red carded for a shoulder charge to the head of Jonny May made the game an uphill battle for Worcester and one that they were unlikely to get too much from, though that took none of the lacquer off of Hill’s full-time captaincy debut.

Hard edges will keep you in games and resilience will make you competitive, but to win games and keep on winning them, sometimes you need something a bit special on top of that. This is where Hill’s partner in crime, Ollie Lawrence, comes in.

Saturday’s loss to Gloucester was a potent reminder of what a complete rugby player Lawrence is becoming and there would have been plenty for England head coach Eddie Jones to glean from the young centre’s performance.

Lawrence has the attacking talent through his pace, footwork and ability to beat his man one-on-one to provide that spark and incision that Worcester need to trouble opposition defences. That has been an apparent part of his game ever since he was dominating in the Bromsgrove 1st XV at schoolboy level.

It is in the areas around this where Lawrence’s development is most notable, as he rounds out the rough edges of his skill set.

There was a confidence in his kicking game on Saturday afternoon, ranging from a booming pressure reliver inside his own 22, to the well-weighted through-ball off the inside of his foot to almost send Worcester in for their second try of the game. It was unrecognisable from the 19-year-old who would consistently take on any and everyone in front of him. 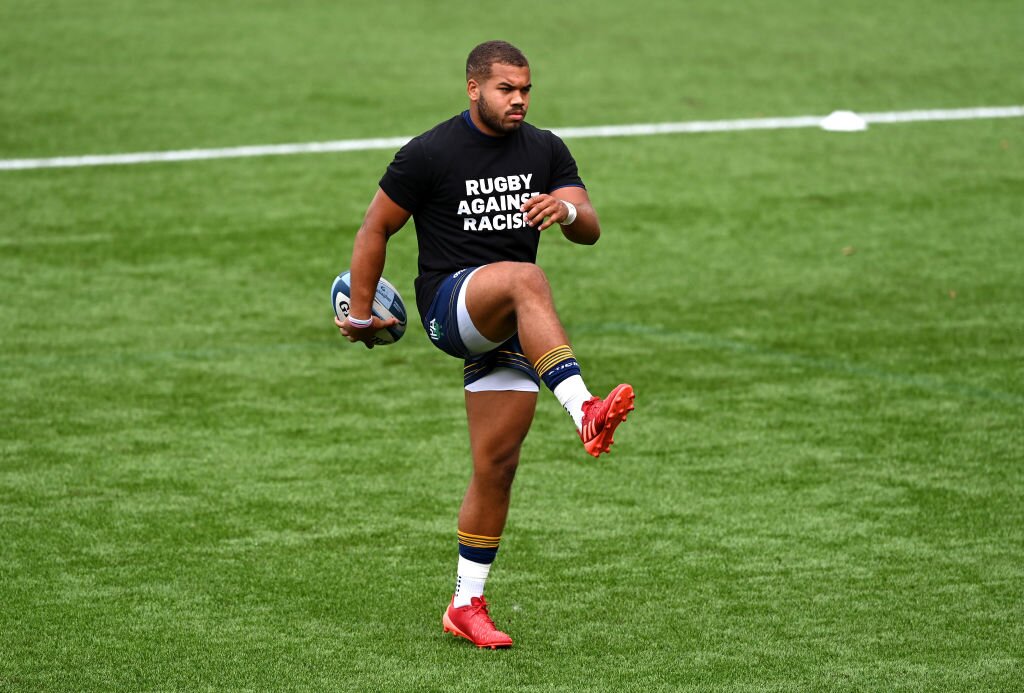 Lawrence warms up for his Worcester’s first game since lockdown. (Photo by Shaun Botterill/Getty Images)

Defensively, it was always going to be a challenge for Lawrence once Nanai left the field, leaving an abundance of space on the pitch for the outside centre to defend. Nevertheless, that did not stop him lining up Lewis Ludlow and driving him back in the tackle, showing his enviable pound-for-pound power. He also stayed in his lane and prevented a pass or offload to the support when James Woodward beat the blitz of Francois Venter. He worked hard on the scramble and marshalled the space well when Danny Cipriani put the ball through the hands, rather than with the boot.

As a ball-carrier, he reinforced his ability to run back against the grain and hit those incisive lines against an over-pursuing drift defence. His proclivity for standing up a defender and burning them on the outside arc is already well-known. As a result, you could see the respect that the Gloucester defence were having to pay him, as one dummy line back inside caught the attention of multiple defenders, saw at least two of them plant their feet in response, and thus space was created outside for his teammates.

He is winning more of his collisions in both defence and attack, too. The movement of his feet in contact is noticeable, as he no longer relies on the searing pace and ability to instantaneously break a tackle that set him apart at the age-grade levels.

This wasn’t the sort of Gloucester return Jonny May was expecting https://t.co/GUwhaMupbW

Realistically, Lawrence is not yet taking the place of Manu Tuilagi or Henry Slade in the England team, but he is certainly jockeying for position with the likes of Joe Marchant, who impressed himself on Friday evening, Jonathan Joseph and Fraser Dingwall to be that next man up and on the cusp of the matchday 23.

His involvements with Worcester and opportunities to catch the eye should only continue to grow, as he is now showing that he has those defensive, game management and decision-making skills to complement the undeniable attacking talent at his disposal.

Worcester have an enviable duo in Lawrence and Hill to build around moving forward and though their march toward challenging at the top of the table is still a way off, the growth of this pair should be celebrated by any and all rugby fans who want to see a more competitive Premiership, from top to bottom.