With the wind whipping off the Irish Sea and squally showers, conditions were difficult for both sides with Scotland enjoying the more encouraging first half hour as Wales were repeatedly penalised, turned over and made handling errors, yet they inexplicable went into the sheds at half-time 7-6 up after 21st Rhys Carre powered over from a short distance, after an uncharacteristic chip from Taulupe Faletau gave them territory.

James Davies being penalised for being off his feet seconds from the break, gave Adam Hastings the chance to reduce the lead to one point after Russell, who went off with a groin strain, had opened the scoring.

Andy Farrell talks to the press:

Andy Farrell talks to the press:

The second-half was similarly uninspiring as both side’s sought to break the deadlock as both side’s benches tried to whip up some patriotic fervour. The game’s key moment came on 61 minutes as Stuart McInally emerged from a powerful Scottish driving maul with the ball and despite Halfpenny reducing the score to 11-10, a late penalty from Hogg on the final whistle – Wales’ 16th conceded – saw Scotland emerge triumphant to register their first win on Welsh soil since 2002 and leave Wayne Pivac with a far from satisfactory fifth-placed tournament finish.

Leigh Halfpenny – 6
Difficult conditions for a full-back, Halfpenny was quiet in the first-half compared to his opposite number, Stuart Hogg. Nearly knocked a high ball on in second half but showed his customary composure to drill the ball through the uprights on 66-minutes.

Liam Williams – 7
In only his third game back, Williams marshalled Kinghorn out wide with a series of powerful hits and made a brilliant take off a ricocheting ball to release pressure from Wales late on.

Jonathan Davies – 6
His comeback from nearly a year out continues. Used more for clearing lines with his cultured left-boot from the backfield than for offensive play. It was a muted afternoon for the double-Lion.

Owen Watkin – 5
Worked hard to contain Chris Harris and James Lang in midfield but was unable to free himself of Scottish defenders. Still waiting for a breakthrough performance in a Welsh shirt.

Josh Adams – 7
Showed his appetite for work early on by yanking Graham into touch and was often heard shouting encouragement. He had a few probing breaks in his own half and always looks to do something positive but he didn’t have any field position to punish the Scots.

Dan Biggar – 5
Quiet as Wales failed to impose themselves in first half. Went off early in the second-half with a lower-leg injury, after pulling up after converting Wales’ only try.

Gareth Davies – 6
His game was a mixed bag. Showed enterprise with a little nudge down the left-wing for Adams inside his own-half, shot out of the line to make a few last-ditch ankle taps but was skittled by Hamish Watson and saw some box-kicks floating into touch and his service was patchy. Taulupe Faletau – 6
Rarely spotted in the first half but picked a ball off his feet to chip in behind the defence deep in Scottish territory, otherwise, couldn’t free himself from Scottish tacklers. Quiet for a player of his stature.

James Davies – 6
Struggled to impose himself on the game as Hamish Watson and Jamie Ritchie had the better of the backrow skirmishes. Penalised for a penalty early on, he cost Wales three points after being caught off his feet just before half time. His work rate couldn’t be faulted, but like his brother, he has had very little rugby in the last 12 months.

Shane Lewis-Hughes – 8
Rarely seen in the loose, he did show neat hands after taking a Russell chip kick but his strengths are in the tackle – where he made a creditable 21 tackles – and he was still showing fighting qualities in the game’s dying embers. One of Wales’ better performers.

Will Rowlands – 6
Hands let him down, few hard carries in the tight exchanges but improved as the game went on. Good footwork for a break-up midfield, tidy in the lineout.

Alun Wyn Jones – 7
Winning a record 149th appearance, Alun Wyn Jones was his customary all-action self and in a robust defensive performance, where he made 13 tackles, he put in a series of thumping hits on James Lang and Jamie Ritchie, showing he’s lost none of his edge. Will be hugely disappointed to be on the losing side. 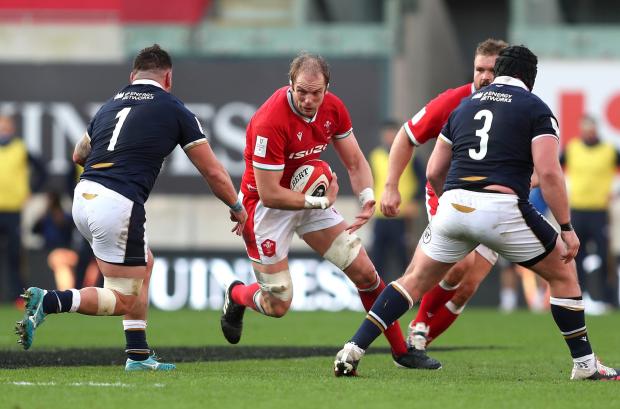 Tomos Francis – 6
After playing second-fiddle to Alec Hepburn in Exeter’s double-winning heroics, it was somewhat surprising to see him still chugging away in the final minutes. A willing carrier in the tight, he wasn’t able to impose himself on Rory Sutherland.

Ryan Elias – 5
Endured a challenging opening 10 minutes, with an overthrow early on to Taulupe Faletau, a shipped penalty and a throw adjudged not straight. Will have better days in a Welsh shirt.

Rhys Carre – 5
Carre crashed over on half-hour for his first Wales try but he fell off a few tackles and wasn’t able to dominate his opposite number, Zander Fagerson. Still finding his feet at Test level, Wales would like to see more from him carrying.

Replacements
Wyn Jones – 7
Widely acknowledged to be a superior scrummager to Carre, the Scarlet won a scrum penalty just after coming on and was a willing runner in the loose. Expect to see him starting during the Nations Cup.

Rhys Patchell – 6
Tidy enough, he pushed the ball down the line without fuss, but another who has had little rugby and didn’t impose himself on the game.

Cory Hill – 5
Unable to stop the powerful Scottish rolling maul from rumbling over for the game’s winning try, he put himself about but had precious little time to make any sort of impression.

Aaron Wainwright – 5
Tried to add some ballast in defence, but another Welsh pack member who couldn’t bend the game Wales’ way.

Nick Tompkins – 5
Whipped the ball down the line in customary but too much on one pass to Jonathan Davies as Wales chased the game.