Boil over: Tempers flare as Exeter get revenge on Saracens

Exeter took revenge on arch-rivals Saracens in their first meeting since the salary-cap scandal broke but their 14-7 Gallagher Premiership victory was marred by a late red card for Harry Williams as tempers flared at Sandy Park.

Converted tries by Nic White and Jacques Vermeulen scored in each half swept the Chiefs to a victory against opponents who have been docked 35 points and fined £5.4million for exceeding the league’s £7m ceiling for wages.

Exeter had more reason than any other Premiership club to feel aggrieved after losing the two most recent Premiership finals to Mark McCall’s men, prompting their owner Tony Rowe to call for them to be stripped of their titles and threaten legal action.

For all the Chiefs’ anger – director of rugby Rob Baxter has also been vocal in his dismay at Saracens – an ugly match failed to ignite until the 77th minute when a ferocious brawl broke out on the sideline.

It's just got very heated at Sandy Park! ??

Duncan Taylor grappled into touch and a large mele ensues…

Harry Williams earns a second yellow card for his involvement from the bench. ? pic.twitter.com/tqGpivNoPO

It was sparked by White sitting on Duncan Taylor and in a flash large numbers of players locked horns, including the substituted Williams who joined in from the Exeter dug out.

Once peace had been restored, referee Wayne Barnes declared the tighthead prop’s behaviour “not acceptable” and showed him a straight red card.

Williams even invited England team-mate Mako Vunipola to continue the fight in front of a record Sandy Park crowd of 13,593 before Barnes intervened to issue marching orders to a player who was also sin-binned earlier in the game.

Up until that point the grudge match had lacked fireworks, the closet to a flashpoint being a simultaneous dressing down delivered by Barnes to both captains for protesting against decisions he had made.

Two poor missed penalties by Owen Farrell were jeered and when Exeter had the wind in their sails for the second half they received noisy support, their defensive resilience particularly rousing for home fans.

Saracens were awarded a last-gasp penalty try to salvage a losing point from a chastening trip to Devon as they continue their desperate battle for top-flight survival. 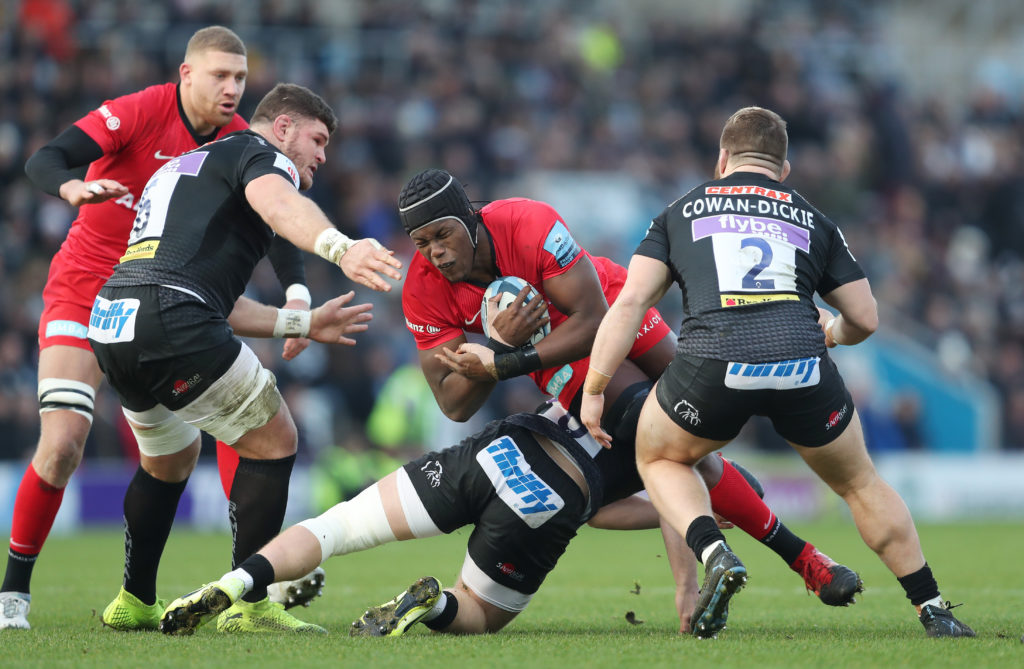 Billy and Mako Vunipola were prominent as Saracens created an early overlap that was wasted by Jackson Wray’s dismal pass when acting at scrum-half and errors began to compound for the nervy champions.

A poor pass from Farrell to Max Malins was hacked downfield by White and the Australia scrum-half was first to the ball as it crossed the line, offering an easy try.

Farrell then missed a routine penalty, a Saracens scrum was shoved backwards and another opportunity went begging in the right corner. 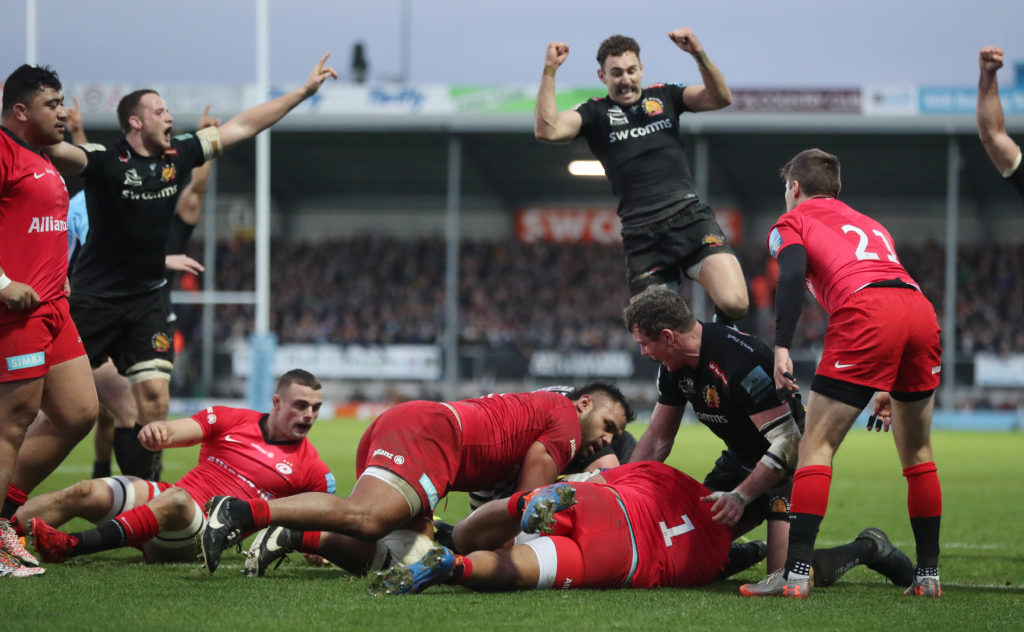 Exeter were equally jittery at times with White’s poor decision-making a hindrance, but their whitewash stayed intact again when Jack Nowell forced a penalty against Billy Vunipola.

Williams went in at the side to earn a yellow card but his side survived the next 10 minutes, although they spent most of the period defending deep in their own half.

Farrell missed an even easier penalty and Saracens continued to see points flash before their eyes as Jamie George was held up over the whitewash following a line-out drive involving almost every visiting player. 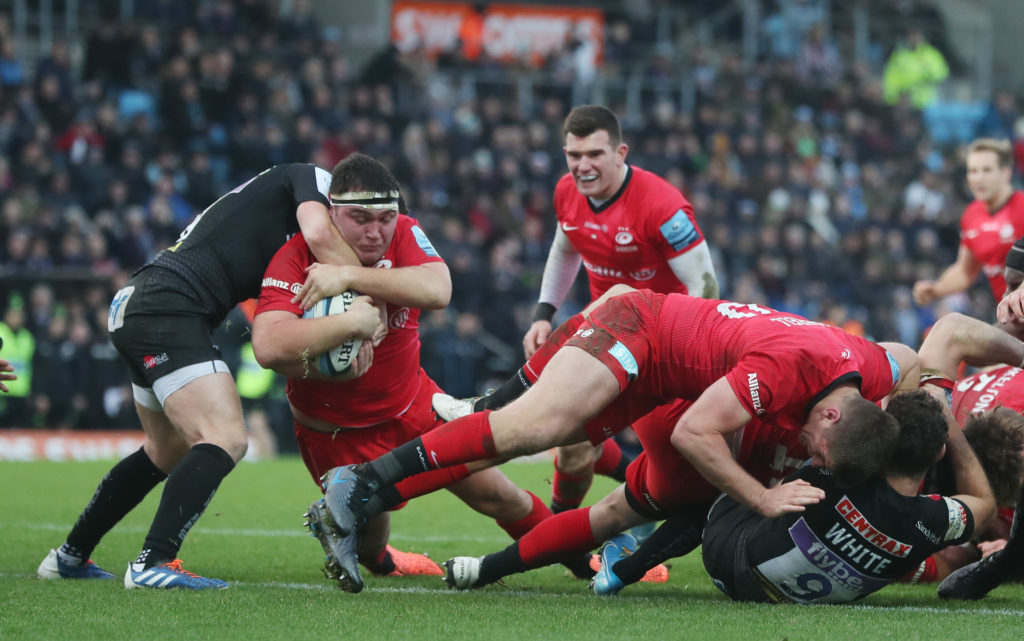 Exeter emerged for the second half a more purposeful team and the scales now tilted in their favour as they staged attack after attack, reversing Saracens’ territorial advantage.

Their second try was not pretty but the swarm of forwards that battered away from close range eventually made their mark as Vermeulen forced his way over. 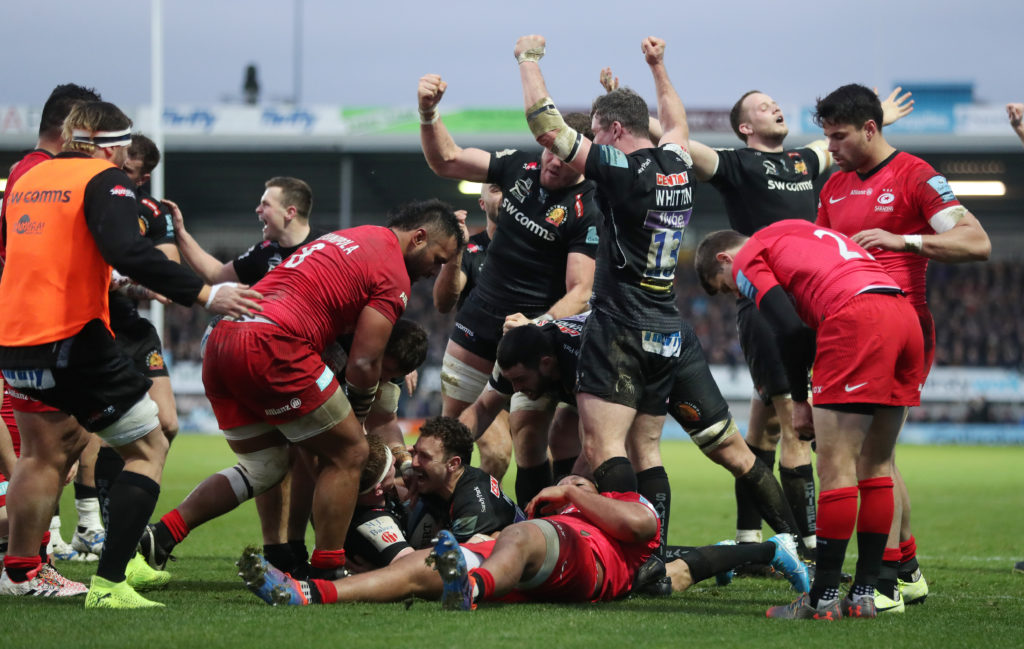 Fly-half Joe Simmonds had converted both tries to leave Saracens trailing 14-0 but a long kick by Farrell that was almost gathered by Richard Wigglesworth was headed off by Sam Simmonds.

A dramatic final 10 minutes set pulses races as they rivals came to blows, but Exeter had already done enough.

Images from the match: 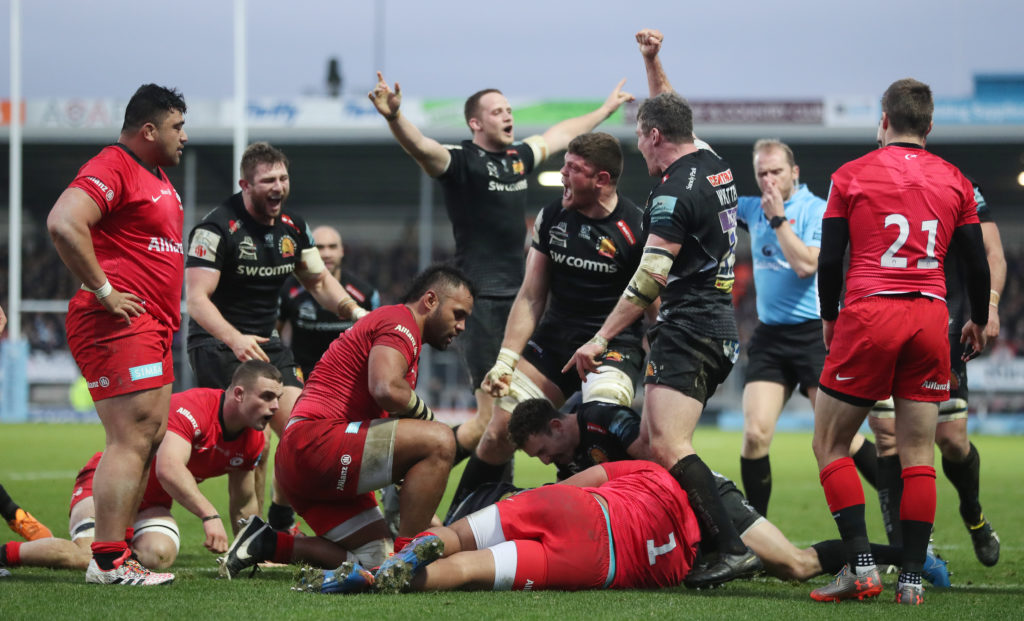 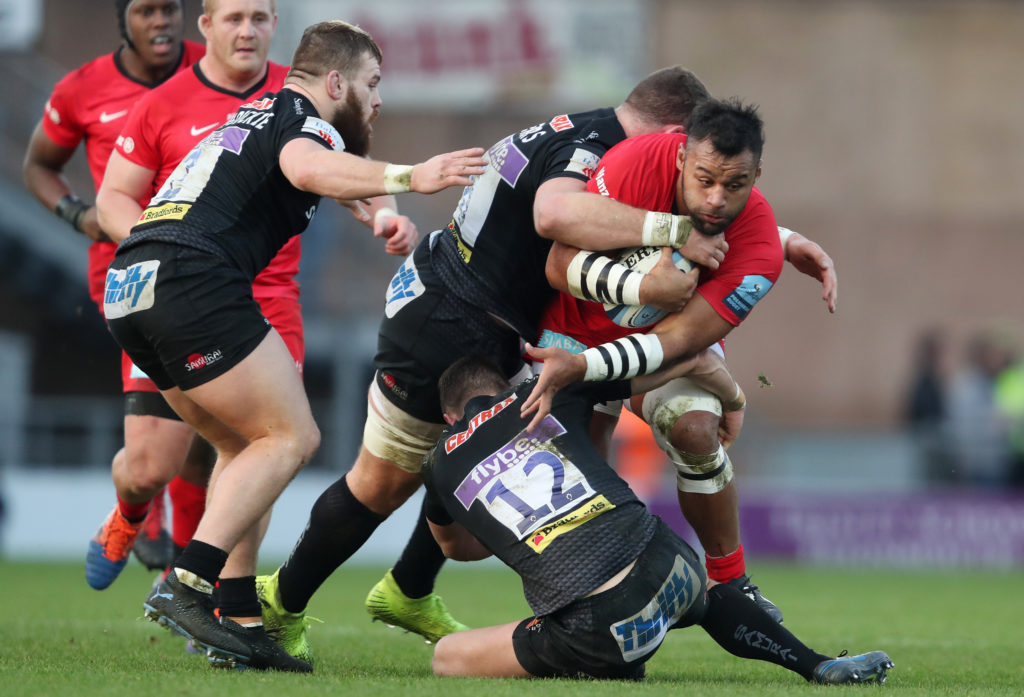 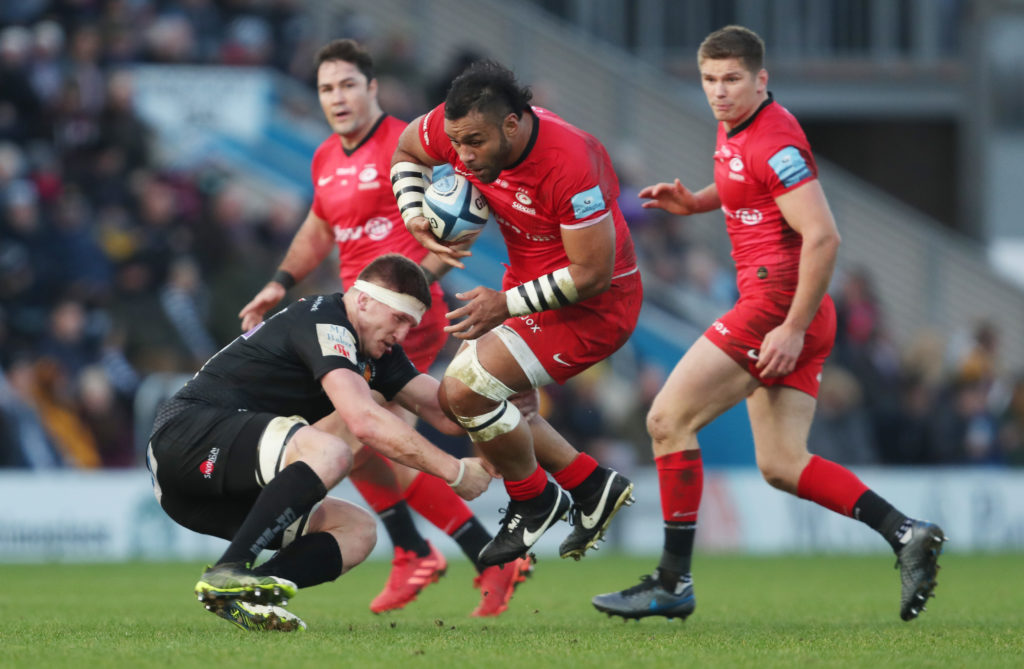 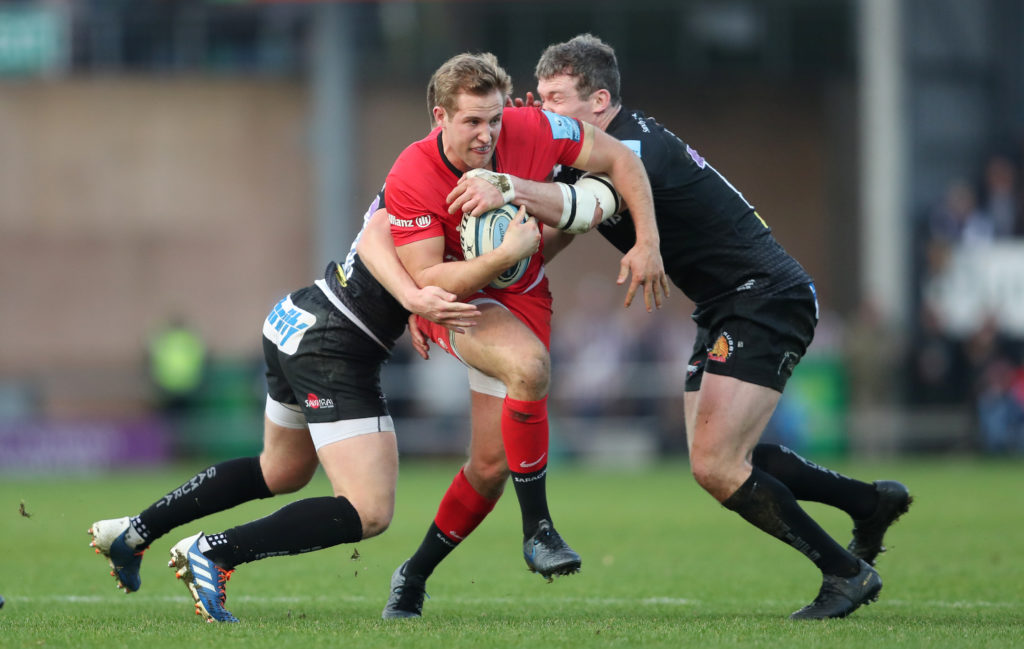 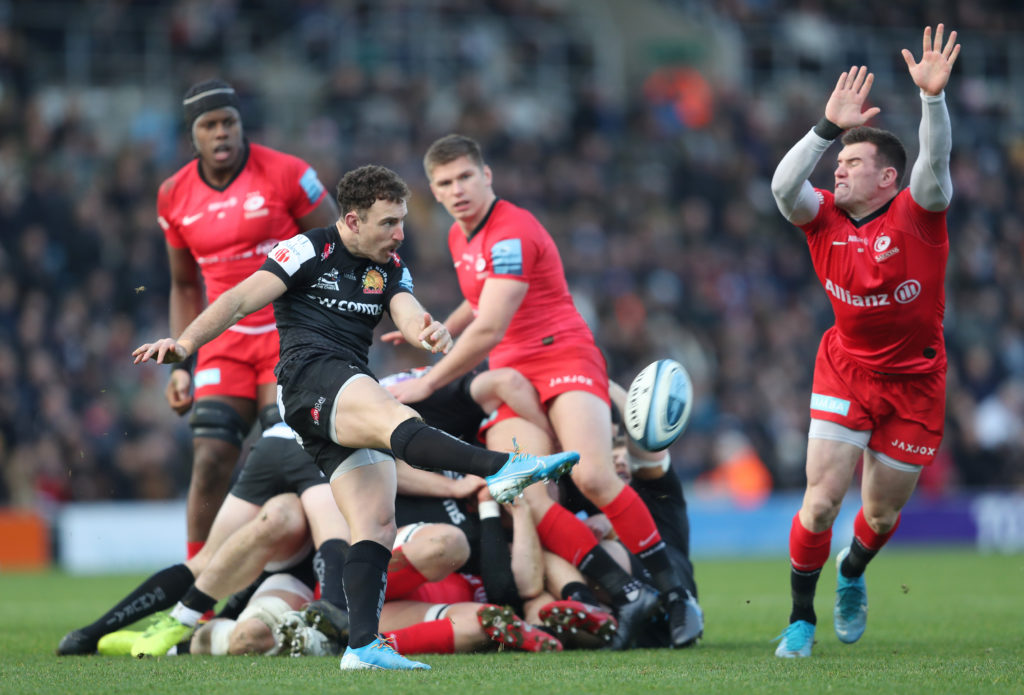 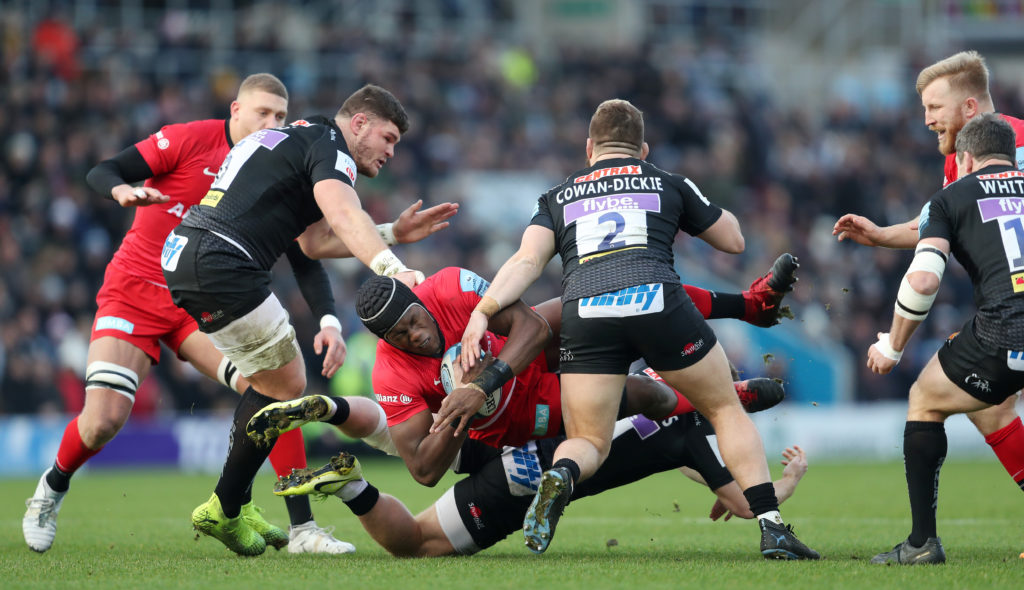 Boil over: Tempers flare as Exeter get revenge on Saracens

Cockerill wants 'favour' from Glasgow Next