RUGBYPASS+ Wales' strategy that proved fatal against the All Blacks

By Ben Smith
Wales' strategy that proved fatal against the All Blacks
By
Ben Smith
1 year ago
InternationalNew ZealandWales
8:49pm, 01 November 2021 2 Comments

Wales have typically been a side that is strong on the ground and relishes the contact zones and ensuing contests over the ball at the breakdown.

The likes of Josh Navidi, Justin Tipuric and captain Alun Wyn Jones thrive when they slow down the ball, hold up carriers and blur the lines between rucks and mauls, which creates a mess as piles of players fall to the ground in vulnerable positions.

Honed for years by ex-defence coach Shaun Edwards, who is now with France, Wales became a doggedly vicious defensive side that could take opposition attacking plans to the meat grinder and turn them into gruel.

The Welsh pack often hunt ball-carriers in a gang, disrupting the flow of the opposition carry game by forcing the cleaners to handle more than they had bargained for.

This strength was illustrated when debutant openside Taine Basham won his first international turnover against the All Blacks directly after Beauden Barrett’s intercept try last weekend.

The two nearest supporting defenders, Ross Moriarty (6) and Wyn Jones (3), join Basham (7) in holding up ball-carrier Joe Moody (1) as the visitors try to set up a platform from which to exit the 22 with a basic pod carry. 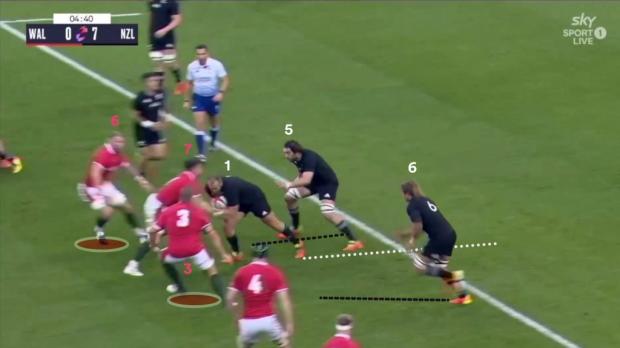 The combined efforts of the supporting players force the two All Blacks cleaners, Sam Whitelock (5) and Ethan Blackadder (6), to attempt to remove them.

The problem is that with Whitelock and Blackadder occupied, there is no one to take care of Basham, the original tackler, who is able to release Moody and strike at the unprotected ball carrier and win the holding-on penalty. 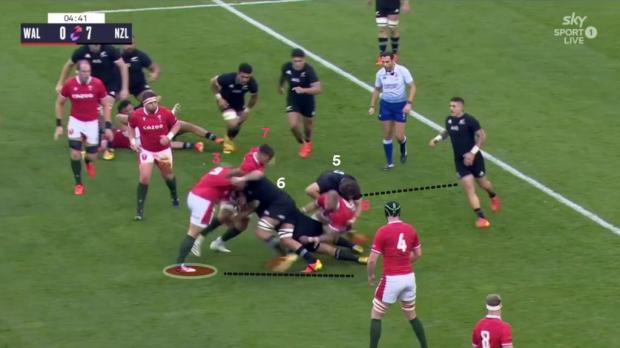 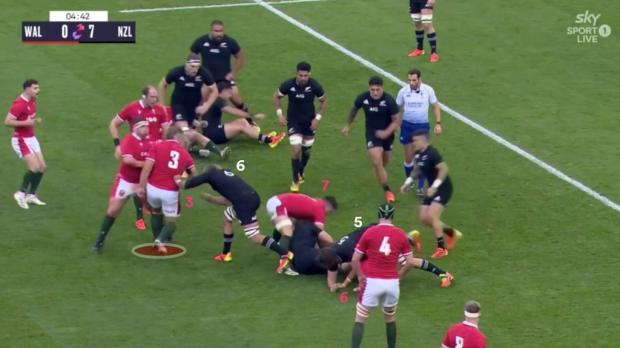 This three-man demolition job of the All Blacks’ ruck is the type of play that Wales have lived off for years to stifle attacking possessions and win kickable threes.

This strength in the wrestle and on the ground has also shaped how they exit pressure zones.

Steering play away from lineouts by kicking long, Wales dare outside backs to run at the red wall that usually meets them where they then use gang tactics like the one employed above on Moody, once a side tries to run a phase play shape.

While first five Dan Biggar usually controls the midfield third with a high volume of contestable bombs, the exit box kick from inside and around the 22 by the likes of halfback Gareth Davies has generally been long, uncontested and in-play – asking kick returners to enter the Venus flytrap that is the waiting Welsh pack.

With a host of frontline starters in the back row missing against New Zealand – Navidi, Tiperic and Taulupe Faletau – this type of exit plan was fraught with danger against a backfield loaded with counter-attacking talent like Will Jordan, Rieko Ioane and the Barrett brothers.

When they lost captain Jones early in the first half, and Moriarty a short while later, the quality of the Welsh pack suffered and it was going to be a test to deliver the same level of defensive resolve.

In the first half, Wales had just one exit kick from deep inside their own half as they controlled a lot of possession and territory adequately. They were not punished by the All Blacks kick returners as a result.

Basham was a feisty package full of enthusiasm, but after they lost their most experienced pair, it was a struggle to slow the roll of the All Blacks carriers or deliver this type of exit plan.

Wales finished with a dominant tackle rate of just two per cent in the game, as well as 28 missed attempts as their defence suffered under the weight of poor kicking that played into Kiwi hands.

In the first half, Wales had just one exit kick from deep inside their own half as they controlled a lot of possession and territory adequately. They were not punished by the All Blacks kick returners as a result.

By contrast, the hosts had 10 exit kicks in the second half, only two of which were kicked into touch. That handed some of the world’s best runners some golden opportunities to counter.

The uncontested and long kicks invited the All Blacks to attack fractured kick-chase lines. Even when one of the two touch-finders did go out of play, Beauden Barrett restarted things almost immediately with a quick line out.

The All Blacks were able to counterattack on 82 per cent of the Welsh exit kicks, a recipe for impending disaster.

The first exit kick in the second half from a scrum was asking for trouble when the ball was kicked deep and down the throat of Jordan (14). 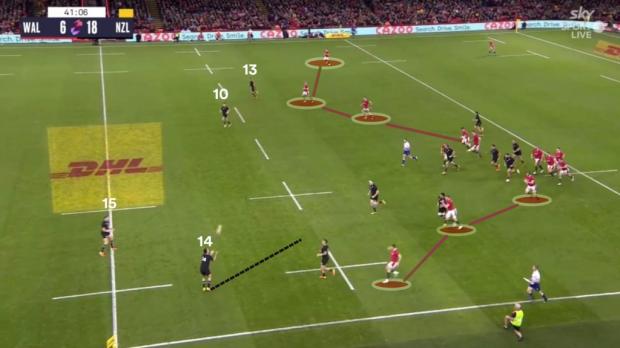 The congregation of forwards at the scrum made it difficult to get the kick-chase line right.

Players were getting up off the ground at different times and were bunched together, which made the Welsh line very thin on the edges, yet the need is immediate to push forward if the ball is still in play.

Wales’ kick-chase line on either side of the scrum is visibly staggered, inviting Jordan to weave his way through some unorganised defence.

The fact they did not pay the price on this occasion does not excuse the poor kick, which absolutely needed to find touch or find grass from that situation.

The very next clearance, again from Gareth Anscombe from a short-arm penalty, was hammered long down to Jordan (14). 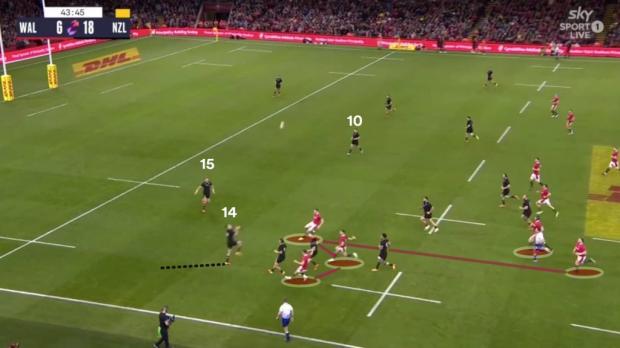 Wales’ kick-chase line had a massive seam between the first arriving unit and the rest. Although three defenders should have been enough to contain Jordan, they had to let him land and Tomos Williams (9) did a poor job wrapping him up.

Once he got some wriggle room, Jordan found the gap in the chase line to break upfield for long run. Wales closed him down but didn’t heed the flashing warning lights from their exit plans. 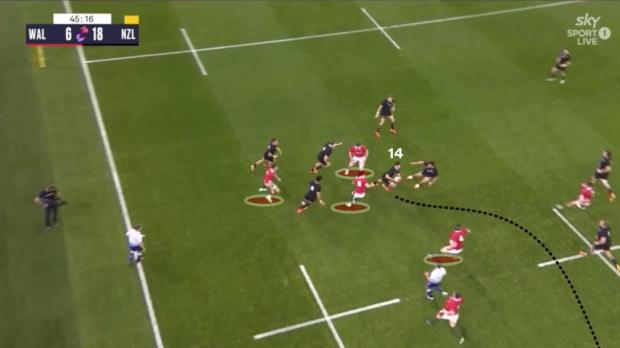 Another long box kick minutes later from Williams was fielded by Barrett, who freed up speedster Ioane toward the middle of the field.

The chase line was better from Wales but contained only six defenders in the front line, which offered wide gaps for Ioane to target. Ioane targets Basham (7), who was vulnerable to the left foot step because he was moving laterally to cover the aforementioned gaps. The All Blacks wing beats him on the inside and, despite tripping, broke upfield out of the clutches of the nearest defender. It ended with another long break for the All Blacks that, fortunately for Wales, they weren’t able to finish, but the ominous danger signs would finally prove to be fatal the next time Williams kicked long and uncontested in the field of play.

A third opportunity beckoned for Jordan and he didn’t turn it down, this time backing his full range of skills to capitalise.

The Welsh kick-chase line was improved, but Jordan was able to manipulate the inside-out jockey defence to get a mismatch with reserve lock Will Rowlands (19). 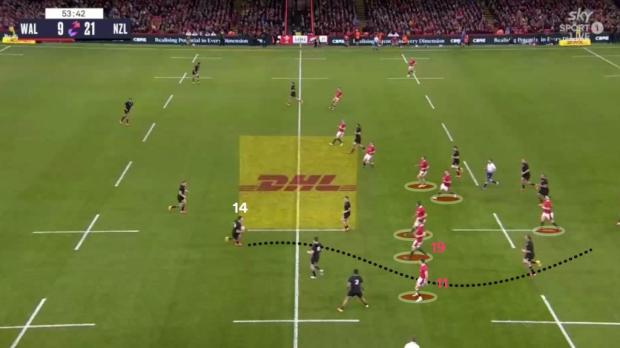 Josh Adams (11) has to jockey outward to cover the outside man, leaving Jordan one-on-one with Rowlands, the slower big man, on the inside. Jordan shaped to pass to hold Adams off before accelerating around the second-rower.

Some slight contact from the retreating Ethan Blackadder on Rowlands helped keep the gap open. Once in the backfield, the All Blacks wing backed his speed to chip ahead and regather the ball in a brilliant piece of all-round play.

Whilst Jordan’s explosive try was of individualistic nature, the All Blacks as a team had continually hinted that they would make Wales pay for their inept kicking game. It was the third line break in a 10-minute period that was conceded from a kick return.

With New Zealand’s confidence flowing, Barrett (10) was quick to launch another counter-attack after he fielded a long driving clearance kick that only just made it into touch. The movement wide to the left-hand side would culminate in a stunning try to Sevu Reece after Jordie Barrett’s short attacking kick in behind the chase line was regathered.

Beauden Barrett was awarded man-of-the-match on the back of two intercept tries in his 100th test, but Wales came unstuck in this game by inviting the All Blacks to counter-attack too many times from deep kicks in the second half.

Including the regathered kick in the lead-up to Reece’s try, the All Blacks made four breaks from kick returns, scored two tries directly during the transition phase and added a penalty goal from another.

A further try to Anton Lienert-Brown was scored in the phase play afterwards for a total of 24 points. Barrett’s intercepts were just the icing on a typically instinctive attacking performance from the men in black where the tries mostly came from free-form play.

Despite the heavy loss, Wales don’t need to be totally disheartened from the exercise.

The exit strategies backfired in large part because of the missing pieces in the Welsh line-up, who would have offered more reliability in closing down kick returners and forced the All Blacks into phase play patterns more often.

Without those pieces, the All Blacks ran riot.

Their free-flowing counter-attack was pretty to watch against Wales and, in periods, it was some of the finest rugby played by the All Blacks this year, but there will be tougher tests ahead to navigate.

However, the most valid criticism was the failure of the Welsh team to change tack in the second half and slow the game down by clearing to touch and heading to the set-piece.

The Welsh were clearly tired and were torn to shreds by New Zealand’s kick returns, which was exacerbated by continually keeping the ball in play.

Even after Reece’s try, Wales’ final three exit kicks over the last 10 minutes were all long and in-play, asking for more pain.

With the Springboks’ lineout a key strength, you would expect Wales to double down on this approach ahead of this weekend’s test against South Africa, but with injury doubts over their key starters, there could be more struggles ahead.

The status of Jones and Moriarty is dependent on scans, and while Faletau is back in the squad, doubt surrounds his ankle injury.

Tipuric, meanwhile, is desperately missed and won’t be back this year, and Navidi is just as important but is recovering from a shoulder problem.

Without the strength of their first-choice pack, Wales need more balance in their exit kicking to limit the potential damage by opting for more contestable kicks or touch-finders.

If Biggar and fullback Liam Williams return to the starting side, they need better direction from that experienced duo in that respect to keep their pack fresh.

The All Blacks will not get the same opportunities to play like this against Ireland and France and, as such, will have to find other ways to construct their tries.

With Edwards in charge of France’s defence, the Welshman will have more grunt available up front to put New Zealand’s attack in the mud, even without captain Charles Ollivon. Ireland will also be smarter with their kicking with halfback Conor Murray handling the exit duties.

Their free-flowing counter-attack was pretty to watch against Wales and, in periods, it was some of the finest rugby played by the All Blacks this year, but there will be tougher tests ahead to navigate.