RUGBYPASS+ Has the England job come too early for Steve Borthwick?

By Nick Bishop
Has the England job come too early for Steve Borthwick?
By
Nick Bishop
3 weeks ago
Gallagher PremiershipEnglandLeicester
6:27am, 09 January 2023 22 Comments

“The King is dead. Long live the King!” Australian kingpin Eddie Jones has packed his bags and he is on his way. The Randwick man owns the best coaching win record in England history (73 per cent) and took his team to a World Cup final, and he engineered one of the best two England performances of the last decade at Yokohama against the All Blacks.

It all made no difference in the end. The media pressure on the back of a string of moderate results reached a tipping point, and suddenly Leicester Tigers head coach Steve Borthwick found himself in the national hot seat, probably about 12 months earlier than he would have expected.

The ex-Bath and England second row has only nine months to spark a turnaround in fortunes, and that means there will be a strict tactical limit to what he can achieve. At this time last year, I found myself praising what Borthwick had accomplished at Welford Road.

It is highly likely that he will restrict himself to the same formula with country now, a formula that veteran scrum-half Ben Youngs described with the club back then:

“Definitely, we have come on a huge amount [under Borthwick], there is no doubt. We have had to strip our game back and start from the fundamentals of our game, which is set-piece, scrum, maul, lineout, being direct, kicking game, kicking strategy and all that. We have stripped it right back, and I’m sure when we get a full pre-season we will layer on the next bit, layer the next part of our attack and how we put teams under pressure in a different way.”

The England centurion went on to describe the danger of the club’s early momentum ‘fizzling out’ in the latter part of the season. In the event, Leicester Tigers were able to maintain their form all the way to the finish line in 2021-22, overcoming Saracens in a nail-biting finale at Twickenham on June 18.

The problem for Borthwick is he has been promoted to the national job at a time when the Leicester club is on the slide domestically. Youngs’ words have turned out to be prophetic because Tigers’ style of play has been analysed, and to a large degree neutralised in the Gallagher Premiership.

Suddenly the threat of ‘fizzling out’ seems very real, but the range of its implications are now much larger than the scrumhalf anticipated at the time he made his comments.

The Tigers are still applying the bulk of the formula they used to lift the league trophy last season. After 14 rounds of the Gallagher Premiership, Leicester Tigers

In fact, this is where the problems begin, rather than end. By the finish of the 2021-22 regular season, Leicester had conceded the fewest tries in the league (52) at an average of 2.1 per game, and their tackle completion rate stood at 81 per cent, the highest in the Premiership.

Wind the clock on to the first 14 rounds of the same competition this season, and they are leaking almost four tries per game with only Northampton and Newcastle having conceded more. The tackle completion percentage has also plummeted to below 77 per cent, 11th in the table.

The drop in defensive efficiency is an issue for a club which depends so heavily on its kicking game, and the chase which acts as its guarantor. It also represents a potential dilemma for England, with Borthwick having already brought his defence coach at Welford Road, ex-League star Kevin Sinfield, on board as the key member of his support staff.

The deterioration on defence has already had a pronounced impact on results. The club’s four losses in 2021-22 were by an average of fewer than six points per game. So far this season, they have already suffered six defeats with three catastrophic losses – 51-18 to Saracens in round four, 40-5 to Sale Sharks in round 14 and 45-26 to Newcastle Falcons in the latest round of the competition. It is a worrying trend.

It was clear from Leicester’s defeat to Saracens how vulnerable the Borthwick-coached side can be to a team with an ambitious kick return team, willing and able to run the ball back from positions deep inside their own half. When Leicester kicked, Saracens were more than happy to keep ball in hand:

The North Londoners look to build a caterpillar ruck, faking to return the favour with another box-kick – as they had done on the 105-kick slugfest at Twickenham the previous season. In fact, it is the preface to a run-back from their own 22 to the left edge of the field, and that creates a try for Alex Lozowski within two phases of play. The difference is profound.

The plain truth is that without George Ford to navigate the ship, Leicester’s kicking game looks relatively rudderless. The Tigers kick so much ball long downfield that there is an open invitation for return teams to run the ball back against them, with the chase having to cover so much ground.

In the recent game against Sale Sharks, both sides kicked the ball 40 times apiece, but the home side racked up over 1,100 metres on the carry to Leicester’s meagre 387m, generating three times the number of line-breaks in the process.

They began by nullifying the Leicester scrum (the Sharks won the penalty count 3-2), while England second-rower Jonny Hill proved a point against Olly Chessum and the Tigers’ lineout drive:

In both cases, Hill bullies his way past the blocking front and onto the ball carrier, Charlie Clare, to effect a turnover-by-scrum. It was an important statement of intent by the ex-Chiefs man with the new England head coach watching from the stands.

As the first period wore on, Sale began to develop increasing confidence in the kick-and-turnover return game from their own half. From the first little acorns of success on the edge: 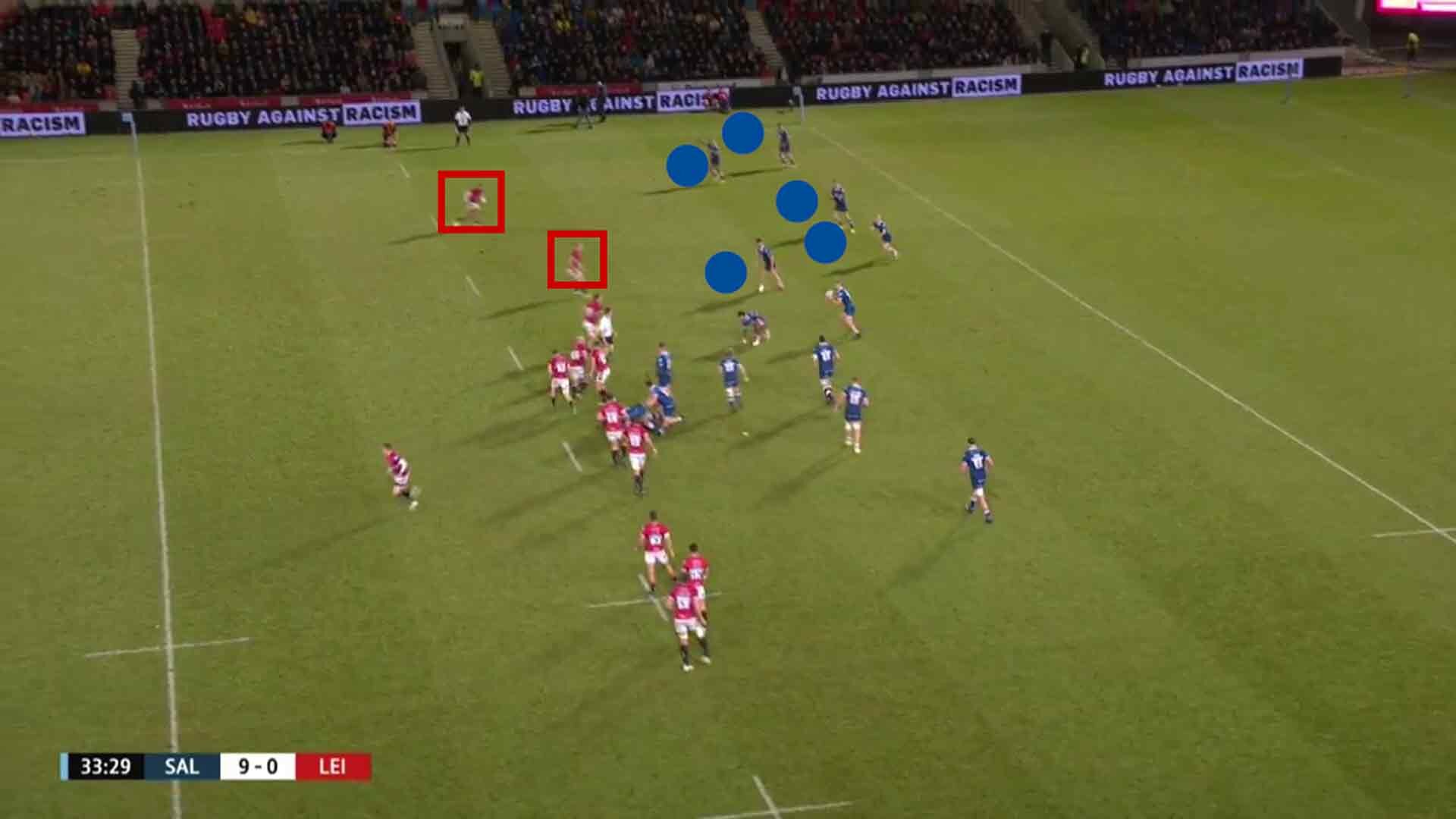 Mighty oaks began to grow only a few phases later in the same sequence:

Sale found space around the 5m channel easier and easier to find, and by ‘oranges’ they had manufactured four clear scoring opportunities from kick or turnover returns:

The space down the 5-metre channel proved to be both a ground-gainer and try-generator for the Sharks. The final quarter was a super-strength for the Welford Road club in 2021-22, but with Tigers suffering a spate of injuries in the backline, the Sharks were happy to run the ball back from their own 22 and straight from the kick-off receipt in that last 20 minutes:

The wide-to-wide counter-attacking theme from deep continued until the very end of proceedings:

Nine months represents a very short time frame for an international head coach to get all the building blocks he wants in place securely, but that is the ‘poisoned chalice’ with which England’s new head honcho Steve Borthwick has been presented. He has no choice but to make the best of it.

As Ben Youngs suggested, there will be little time to do anything other than strip England’s game back to the basics of set-piece, kicking and defence, and that is why Borthwick has brought Kevin Sinfield with him from Welford Road. A few other familiar faces may be towed into the 23-man matchday squad for the Six Nations: Olly Chessum, Dan Cole and/or Joe Heyes in the forwards, George Ford, Manu Tuilagi and Anthony Watson behind.

Of those, George Ford could be the key ‘new face’ – back from a long-term injury but with 84 England caps already under his belt. Three of the four top halves in Borthwick’s first squad could benefit from their strong Leicester background: Ben Youngs and Jack van Poortvliet at 9, Ford and Owen Farrell at 10.

Only Ford and Farrell have the tactical nous to run the kicking game Borthwick wants, and that may well leave Marcus Smith out in the cold – or at best, with splinters in his backside from prolonged periods of bench duty. The real questions may be whether the impact of Leicester’s game plan has already fizzled out with constant repetition, and whether England’s opponents in 2023 will be ahead of the game before it ever starts.