By Nick Bishop
England must embrace attacking flair of young firecrackers
By
Nick Bishop
8 months ago
Gallagher PremiershipEnglandHarlequins
11:49am, 11 May 2022 Go to comments

Significant events on a rugby field often represent the ‘tipping point’, or the critical moment of an underlying trend in the game. When young Henry Arundell’s length-of-the-field try against Toulon went viral on social media, something deeper in the stratum of English rugby began to stir and awaken at the same time.

It induced purrs of appreciation in commentary from one of the very best in the game, and now one of the top pundits on the telly, Brian O’Driscoll. It was the sort of feat of magic BOD used to pull out of the hat as a young man, and it bears repeating:

The kick from France international Gabin Villiere runs on deep into the London Irish 22, and Arundell receives the ball under severe pressure in the shadow of his own goal-posts. His choice is significant: not to kick back and relieve pressure temporarily, but to see the field and the countering opportunities in front of him – even if the Toulon end zone is 119 metres away.

Arundell eschews the safe option, and embraces the same risk as Marcus Smith in the previous round of the Heineken Champion’s Cup versus Montpellier:

The outcome in both cases is a ‘try from the end of the earth’ which will live long in the memories of all who watched them.

Why is this an important development for English rugby as a whole? The emergence of young players like Smith, who is still only 23 years of age, and Arundell (at 19) points the way to a world of new possibilities for the Premiership domestically, and the national team on the wider stage.

For most of the seasons in recent memory, the dominant force in English rugby has been Saracens, a club squarely based on the kicking game and resolute defence. Now Saracens lie second in the current Gallagher Premiership table behind Leicester Tigers, who are coached by an ex-Saracens players and coach in Steve Borthwick.

The Tigers have achieved their climb back to respectability by adopting the same playing principles as the club from North London. They kick more than anybody else in the league: the only side to average more than 1000 metres (1043m), and 34 kicks per game. They have the best defence, with only 43 tries conceded, at a rate of under two tries per game. They scrum for penalties (54, up and to and including round 22) and steal the biggest share of the opposition lineout throw (14 per cent) in the Gallagher Premiership.

Like Saracens, Leicester kills its opponents by rugby’s equivalent of a methodical, but lethal boa constriction. England have been built largely in the same image over the last few seasons, with a majority of Saracens players in the core group of the team: Jamie George, Maro Itoje, George Kruis and the Vunipola brothers up front; Owen Farrell, Elliott Daly and Ben Spencer behind.

Eddie Jones has been busily trying to change the balance, with only five Saracens named in his original 36-man squad for the Six Nations, but he urgently needs players like Smith and Arundell to hatch quickly from the domestic egg in order to change England’s fundamental shape and outlook.

All eight were in the matchday 23 at the Yokohama international stadium on 2nd November 2019. The formula failed when that Saracens bedrock butted heads with a side who kicked more, defended like dervishes, and were even tougher at set-piece in the form of the Springboks.

Eddie Jones has been busily trying to change the balance, with only five Saracens named in his original 36-man squad for the Six Nations, but he urgently needs players like Smith and Arundell to hatch quickly from the domestic egg in order to change England’s fundamental shape and outlook.

The shift in philosophy is nowhere more pointed than in the attitude to the attacking opportunities from kick returns. England already have one of the very best under the high ball in that position in the form of Leicester’s Freddie Steward, but Steward does not offer the same range on the counter as Arundell.

The vivid brushstroke of Henry Arundell’s try against Toulon was only the surface. The depth can be found in London Irish’s earlier Gallagher Premiership match versus Leicester at Welford Road. That game added far more meat to the bones, with the young tyro starting at full-back and standing up to the challenge of the Tigers’ formidable kicking game.

The contest was full-on, right from the opening whistle:

It is Leicester’s already second kick of the game from a position just inside their own half, and Arundell is able to skirt around the first tackle by Nemani Nadolo to break clean down the sideline. The significance lies not just in the initial threat offered by the fullback on the counter, by the sustained invitation to width offered to the attack on subsequent phases (third phase from return, in the second clip). London Irish are able to take play deep into the Leicester 22 and they scored the first try of the game shortly afterwards.

It was a consistent theme throughout the match. Whenever Irish were able to set up the kick return on their own terms, they were also able to stamp their imprint on the character of the play at the same time: In this instance Henry Arundell sees space out to the right on the first return phase, and the picture on third phase looks promising, with three Irish backs, plus a forward in the first line of attack, bearing down on the last Leicester defender.

Ten minutes later, the scenario was much the same, but moving in the opposite direction: 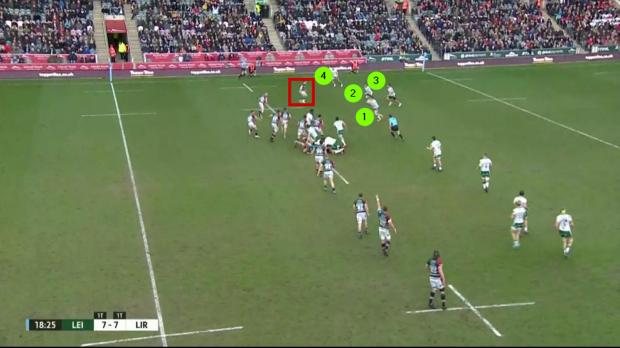 Here Arundell takes play back into centre-field on the return, and there is some room to move for Irish out to the right on the following phase.

Arundell also showed that he was eminently capable of varying his play with the use of the boot on the kick receipt, and that kept Tigers guessing:

The ball is chipped through to the 22, and the young Irish fullback is able to return the ball with interest, missing out on the 50/22 turnover kick by the narrowest of margins.

The crowning moment of victory for receipt over kick arrived just after the half-time break:

The accuracy of Arundell’s instant appreciation is impressive: he steps the first chaser after the box-kick by another ex-Saracens scrum-half (Richard Wigglesworth), and immediately realizes that the defence outside the chasing wing is supplied by two forwards (number 7 Tommy Reffell and loosehead prop James Whitcombe): 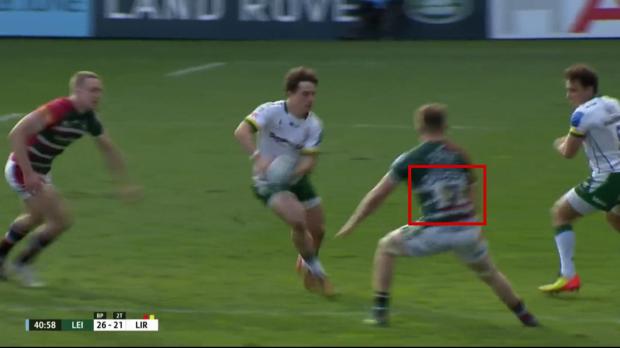 That means there will be space down the short-side five-metre zone if he can stay up in support after making the initial cut. This is how the score looked from a revealing angle from behind the posts:

A simple exchange of passes with left wing Ollie Hassell-Collins is enough to do the trick, with Arundell’s speed burning off the chasing remnants of the Leicester forward pack. It all looks so easy and effortless, and that is because the understanding of the possibilities on the counter was immediate and decisive.

If England at international level, and the Premiership teams beneath them domestically want to develop further, they need to encourage the swift emergence of talents like Marcus Smith at Harlequins and Henry Arundell at London Irish. The absence of the threat of relegation, and the lowering of the salary cap may actually help that process in the long run. Homegrown EQPs will flourish in teams freed to embrace more attacking risk, far from the spectre of relegation and the fear of financial ruin.

Teams like Harlequins and London Irish are already demonstrating that there can be more, far more to rugby life in the Premiership than kicking, defence and set-piece excellence. It is in the contrast and variety of playing styles that the league will excel in future, not in uniformity – and by playing rugby over the whole 119 metres it took Henry Arundell to convert his try, not just the final 30 or 40 metres of the field.