The play that cost the Lions the insipid second test

The second test of the British and Irish Lions tour to South Africa was almost identical to the first, except for a reversal of roles as the Springboks levelled the series 27-9.

The more enterprising side was rewarded when Handre Pollard took the risk to execute a pin-point kick to Makazole Mipimpi for the game’s opening try and gave the Springboks the lead almost straight after halftime.

The game was intense and intriguing but at the same time an ugly, time-consuming mire. Both sides descended into a grinding game of who would drop the ball more, and unfortunately for the Lions, the Springboks fired slightly more shots and won the key moments.

The Lions missed an opportunity to do more with the series lead, playing the same kick-pressure game that saw little more than one of two carries before hoisting a bomb or box kick – identical tactics to the Springboks who continued with their own aerial assaults.

It was successful in crafting a 9-6 lead at halftime but ultimately did not prove daring enough to land a killer blow.

The strategy became problematic for the Lions in the final twenty, as facing a deficit and needing to play more with ball-in-hand, the Springboks defence was not tired enough on account of having a stop-start affair the whole night over the 120-minute encounter.

Again, there is little between the sides, with twenty minutes to go at 11-9 and the game in the balance, the Springboks capitalised on a run of play after a penalty against Anthony Watson for making contact with Pollard in the air just over halfway.

From a dominant driving maul, the Springboks won a penalty advantage and scored when Faf de Klerk threaded the needle with a grubber for Lukhanyo Am to put the lead out past one score at 18-9.

That was it, then and there. Game, set, series drawn.

Hindsight is 20-20, but when the Lions look back on the test, they might regret not playing a bolder game to win the series with one up their sleeve. It was a free roll of the dice, after all, and they played it too safe.

After winning a scrum five metres our from the Springboks try line eight minutes into the game following a Willie le Roux spill, they tried running Duhan van der Merwe inside of Robbie Henshaw for no gain from the scrum.

Under penalty advantage, it was pick and go for three phases until they had to return for the penalty after a ruck infringement of their own.

Biggar didn’t take the opportunity to put a cross-field kick on or use the backs on a free play before they settled scores at 3-all. Not a big deal, but indicative of a night where they didn’t really take every chance at their disposal.

At 6-all with under ten minutes to go in the first half, the Lions did chance their arm by kicking to the corner with Kolbe still in the bin. The ball was stolen from the five-metre line out throw but resulted in another five-metre scrum.

This was a huge moment without Kolbe on the field, and with Van der Merwe back on, the Springboks were down a defender in the backs. What followed was an utter waste of a play.

The Lions break 8-9 going blind, where Handre Pollard is defending in Kolbe’s absence. Sensing the direction of the play, Faf de Klerk wheels completely around to the blindside as Conan picks up the ball at the base. 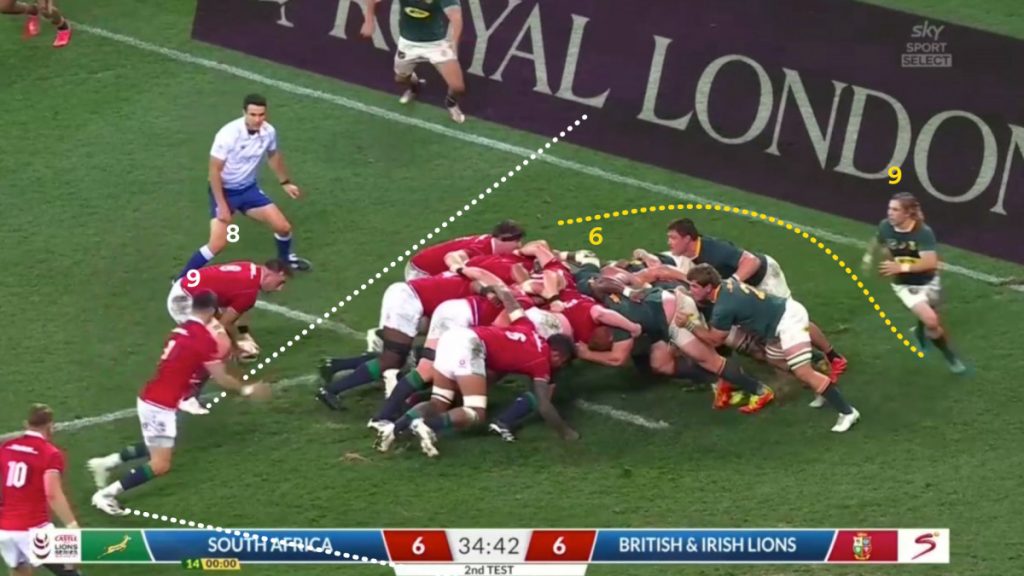 The only member of the Springboks back row not looking up is Siya Kolisi, and with the scrum slightly turned left the path is clear for Jack Conan to have a crack at the line.

With now both De Klerk and Pollard on the blind, the ball should go to the open side where the Springbok backs are thin, or at least Conan should take the run off the back at the space in front of him. 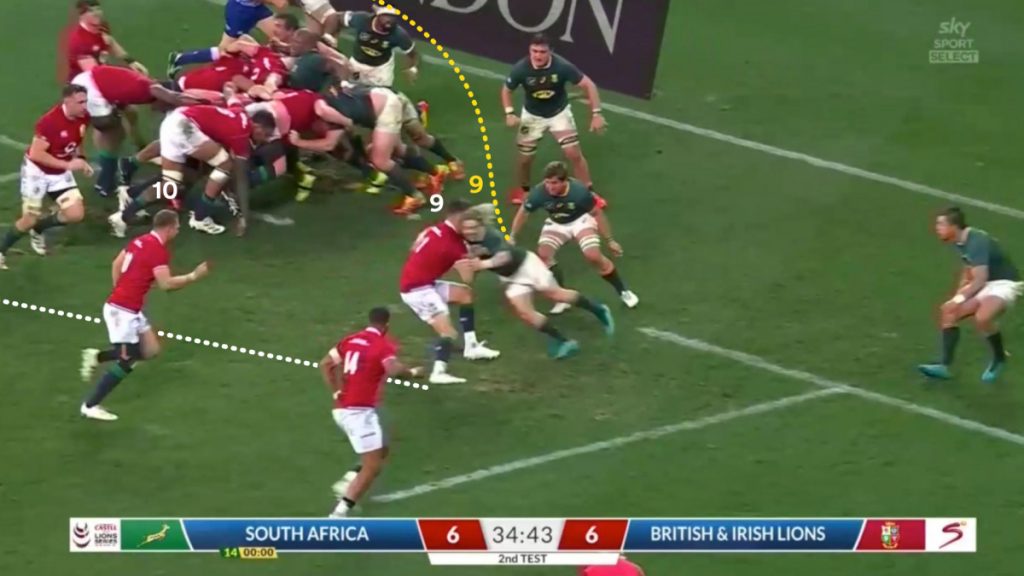 When they did go blind, Biggar was not even in a position to create an overlap, stationed directly behind Murray and it ends up being a botched play all round with a man advantage as De Klerk threw himself into Murray.

A few phases later, Henshaw is stripped of the ball over the line after a Murray chip kick and the Lions settle for three more.

If the Lions took advantage here and pushed ahead 13-6 it would have become a completely different ball game. It was a matter of inches on the Henshaw opportunity but it could have been much easier on the first phase.

The decision-making and execution on the original play left much to be desired and was a turning point in the contest. The windows of opportunity in test rugby are small, and you won’t really get a better one than this.

The Lions’ back three might all be on the chopping block after they could not secure possession in the air, gave away penalties and make poor handling errors. They deserved to retain their spots after the first test, but the Lions cannot afford another showing like that.

When Hogg dropped the first box kick of the second half, it was like Kwagga Smith’s moment in the first test and lead to a huge momentum swing in territory and possession. A few moments later, he spilt another bomb on his five.

It was then Pollard making a daring play, seeing the space and providing a great chip kick into the flying path of Mapimpi to land a huge blow and flip the game on its head. The Springboks dared to play some attacking rugby, albeit sparingly, but were rewarded after taking the biggest risk of the game not under penalty advantage.

It wasn’t the end of the game by any means, but the Lions earnt few opportunities after that.

A 51st-minute penalty attempt by Biggar to retake the lead faded across the face and clanged into the upright, and the aerial struggle resumed as both teams resumed high ball kicks in search of a fatal error.

That period of the aerial arm wrestle lead to the Watson penalty on Pollard, the Am try, and the end of the contest.

If the Lions want to triple down on the strategy for the deciding test, changes are likely with Liam Williams sitting on the sidelines when the aerial performance was far from desired. The Springboks will no doubt be playing this way again.

However, as experienced by both teams, this dire attempt at rugby is almost a coin-flip outcome with neither side showing any ability to diffuse balls. Both sides again could not catch a contested ball to save themselves. Mauls and penalties are used to draw penalties. The red zone possessions are essentially reduced to one-out carries into the defence.

If we are treated to another version of this in the deciding test, someone will win the series and rugby will lose in the process, if it hasn’t already.

The defences are tougher than ever before, but we are at the point now where they aren’t even being tested.

As much as the game has evolved since the 2009 Lions series in terms of player safety, the style of the game has gone completely backwards in this race to the bottom we are witnessing.

The 2009 series did feature kicking, but was also full of far more enterprising play with ball-in-hand from both sides. We saw beautifully constructed strike plays, beautifully defended strike plays. The teams used the ball wide and went at, all guns blazing. It was a spectacle this series can’t live up to, and not just because we don’t have crowds.

This current crop of Springboks players have talked about that series being inspiration to them in their journey in wanting to become Springboks. In 12 years time, they won’t be talking about this series.

No one can possibly be inspired by this insipid showing.

This is rugby only in name, in substance it is anything but, on the field as well as off it.