The Dark Blues needed to turn around a woeful run that had included just one win in 10 against the Irish if they were to cling on to hopes of catching frontrunners Wales.

But a brave second half fight-back proved to be for nothing as Johnny Sexton’s late penalty snatched a 27-24 victory at Murrayfield.

Andy Farrell’s visitors were firmly in control following tries from Robbie Henshaw and Tadhg Beirne, plus 17 points from Sexton’s boot.

Scotland had been inactive for more than a month following the postponement of their trip to Paris and their rustiness showed in a wretched set-piece performance.

But they burst back into life as Huw Jones and Hamish Watson followed up Finn Russell’s first-half try to draw level with six minutes left.

But a mistake by Ali Price allowed Ireland to claim the win as Scotland suffered more disappointment at home following defeat to Wales last time out.

Ireland’s Championship plans had also been derailed by early defeats to Wayne Pivac’s Grand Slam-chases and France but there was no shortage of intent as they arrived in Edinburgh.

How we rated the Ireland players after a scrappy but thrilling Murrayfield encounter #SCOvIRE #sixnationshttps://t.co/pzNkjl1LxW

And it made for an enthralling clash which quickly boiled down to a slug fest with both sides trading hit for hit – and spill for spill.

Sexton opening the scoring with a penalty and there was worse to come for the Scots as they lost the opening line-out of the half – a story that would be repeated over and over before the interval.

Sexton hung a high cross-field kick into the air. With Stuart Hogg and Duhan Van Der Merwe struggling to track its flight amid a swirling wind, Keith Earls got in between the Scots.

He could not gather as the ball bounced loose in the in-goal area but Henshaw was quickly on the scene to flop over it for the opening score on eight minutes, which went unconverted as Sexton’s kick slammed into the post. 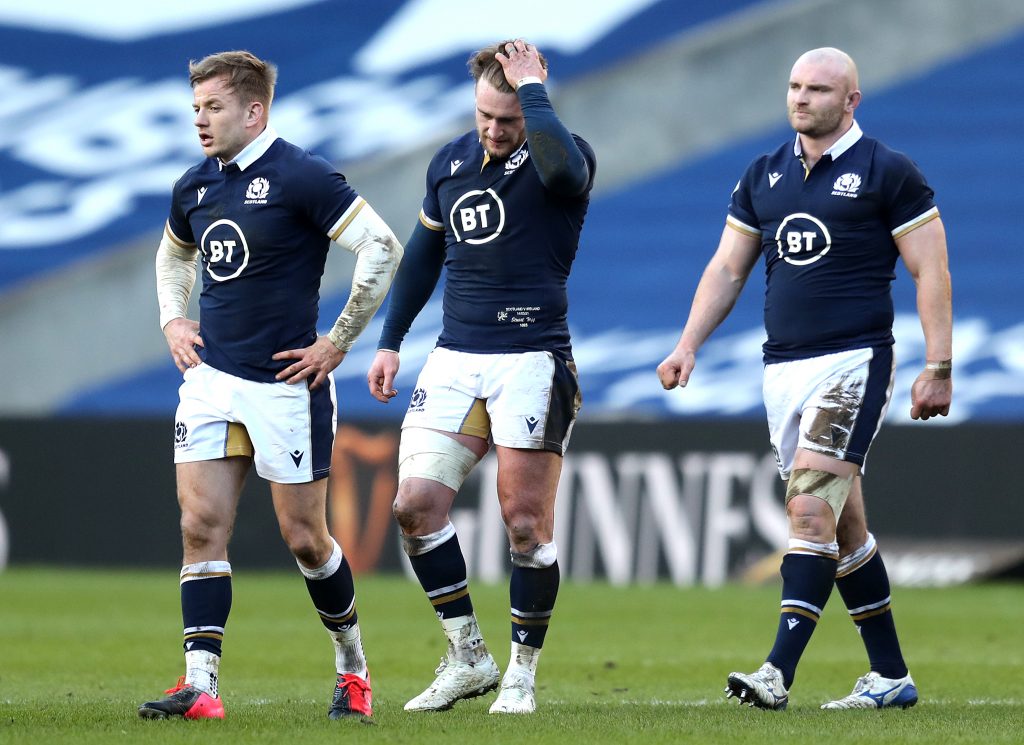 Scotland roared back from the restart, immediately claiming three points back with a Russell penalty.

But Ireland were still busy throwing punches. Jamison Gibson-Park sniped off the base of a scrum looking to score from close range – only for Watson to win a huge turn with his feet planted on the whitewash.

That was standard fare for the Edinburgh flanker – one of the best breakdown burglars in the game. What was more unusual was the sight of Ireland prop Furlong sidestepping two opponents inside his own 22 with his dancing feet. 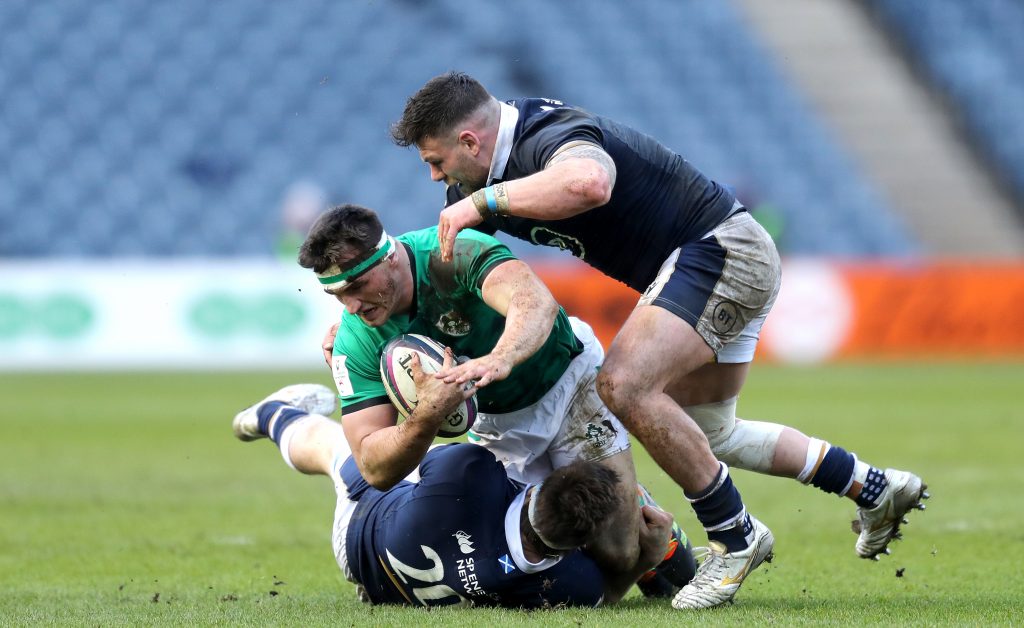 However, Ireland could not play their way out of trouble and a madcap first half was summed up as Scotland nudged in front in the 28th minute.

Skipper Hogg got lucky when the bounced off his chin after charging down Garry Ringrose’s kick. He swung a boot at it, sending it towards Russell. He had another hack at it and got another fortunate bounce as it bounced over Lowe, allowing the Racing 92 man to run in and dot down.

But when yet another line went stray, so did some decent territory. Ireland countered and nudge back in front with a Sexton penalty.

A Russell kick then slipped by as Ireland ended the half four ahead as Sexton split the posts again.

It took just nine minutes for them to add another seven.

James Ryan was having the time of his life, plucking Scotland hooked George Turner’s line-out throws for fun. 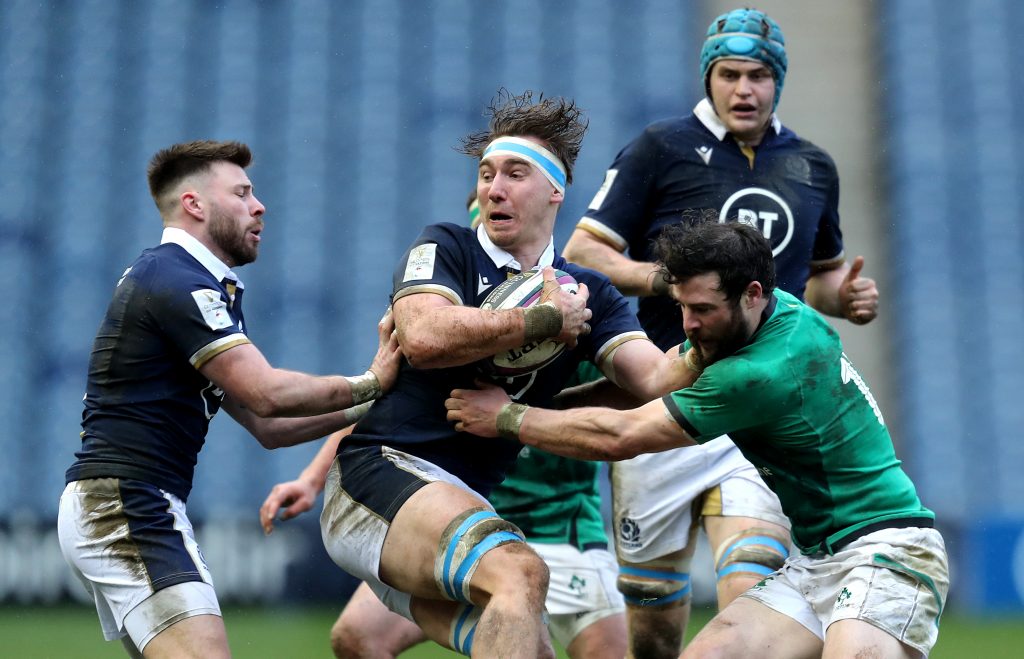 And when he collected one from Rob Herring five yards out it released a fresh green wave crashing down on Scotland’s line, with Beirne eventually barging over.

The Scotland penalties were now flowing thick and fast – with 10 coughed up by the hour mark. Sexton was merciless, firing over again to make it a two-score game.

Townsend knew he had to roll the dice if Scotland were to get back into it. The introduction of Jones provided the spark they needed as the Glasgow centre drove through Lowe and Hugo Keenan to score his first Test try in three years.

The loss of Russell to a head knock was not ideal but as Hogg was forced to step up to 10. But the pack that had struggled so badly at the set-piece came up with a brave surge as Watson did just enough to get the ball over the line as Hogg’s conversion drew the scores level with six to play.

But the celebrations were cut short as Ireland immediately won a penalty as Ryan Baird charged down Ali Price’s kick – leaving Sexton to coolly nail a tricky kick from out wide to snatch the win.