Analysis: What the All Blacks search for in a 10 compared to the rest of the world

Why Crusaders re-brand is wrong Next
Back
Internationals

Analysis: What the All Blacks search for in a 10 compared to the rest of the world

There are a number of attributes required to become a professional flyhalf.

In New Zealand, there is a specific ‘type’ that is sought after, a player who has the fundamental abilities but is gifted in a way where core skills are accessible in quick succession in such a way that the player can operate on instinct to chaos unfolding around him.

It is the mastery of the three attacking options – running, kicking and passing – which separates those that often go on to become All Black 10’s, and it is the special ability to keep all three options open to make big plays that is commonly found among them.

Once they hone their vision and decision-making skills to deploy the necessary skill at the right time, they become unstoppable playmakers on their day.

Aaron Cruden, Lima Sopoaga, Beauden Barrett, Damian McKenie and Richie Mo’unga – all All Black 10’s over this decade – have this ability in their own unique style, with varying degrees of strength in each skill area, while Dan Carter was regarded as the most complete product ever.

To illustrate how this kind of attacking 10 plays on a defensive line, consider the ‘influence factor’ of a flyhalf using Beauden Barrett as an example below. 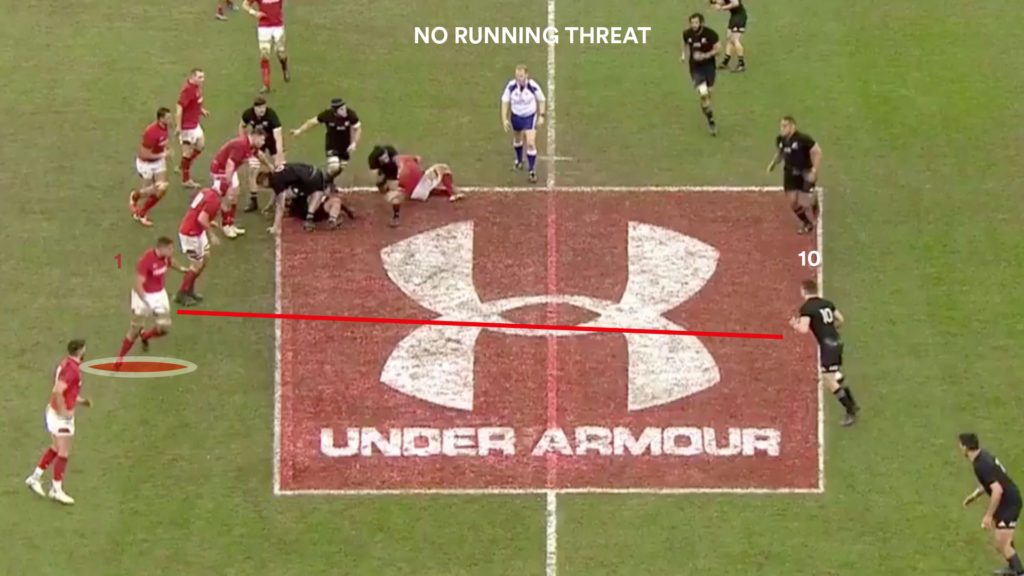 If a 10 is not a running threat first and foremost, then he won’t conceivably get past a one-on-one scenario very often.

The aligned defender can take him down nearly every time, so the 10’s influence factor doesn’t extend past one defender.

Now consider that the 10 is a running threat, with enough footwork and agility to beat his man often, forcing either defender on either side to potentially cover. 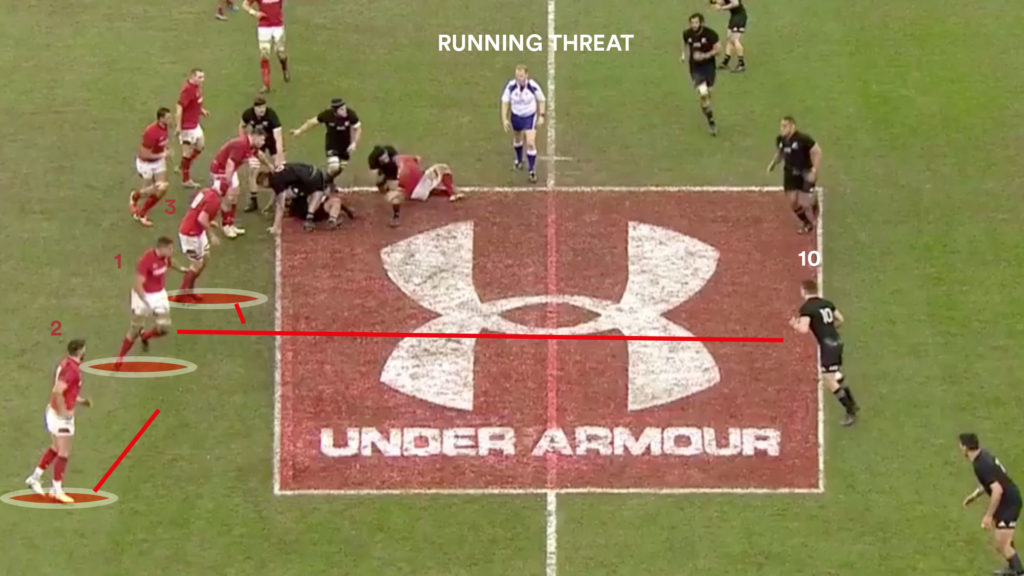 The 10’s circle of influence now extends to three, as these three defenders have to be aware and be ready to make a tackle if the first man misses.

Many flyhalves fit into this category but many fail to develop the necessary ball-handling skills to reach the next level of influence, where the 10 has the ability to make a late pass or in contact. 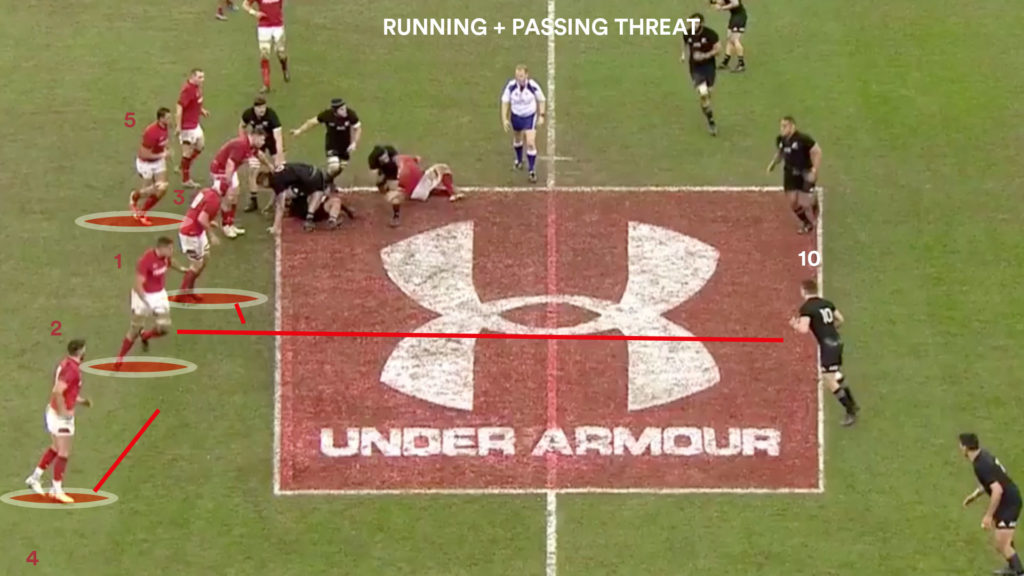 If the 10 does possess late-passing and offloading skills, the circle of influence extends to potentially five players in the defensive line, two on either side of the first defender.

Theses outside players are required to be on hand in the case of an offload or late pass to a support option. 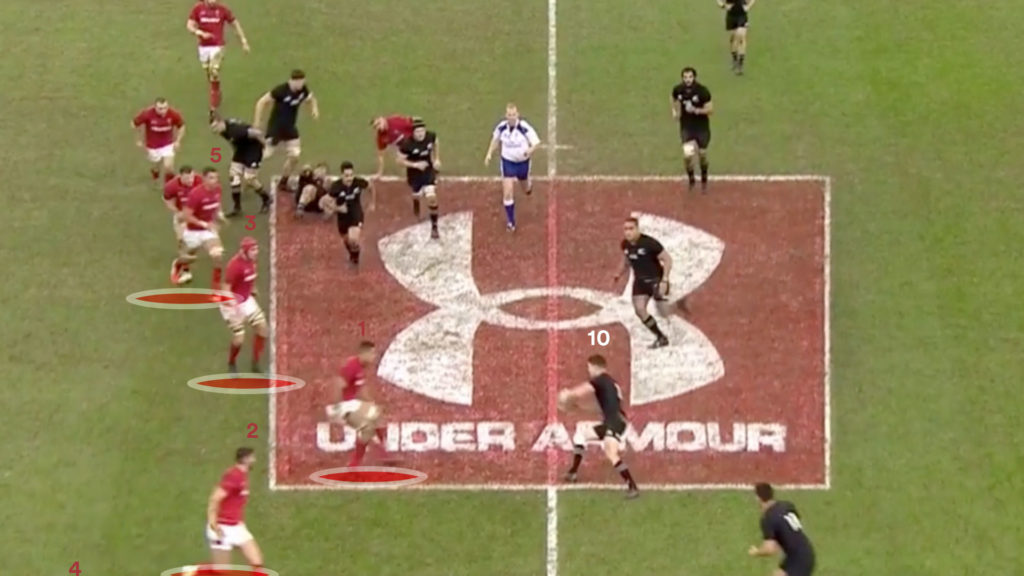 In this example, Barrett takes on the line by using a smart change of angle to skip to the inside shoulder of his aligned defender
Taulupe Faletau, beating him momentarily to entice the interest of the next defender. 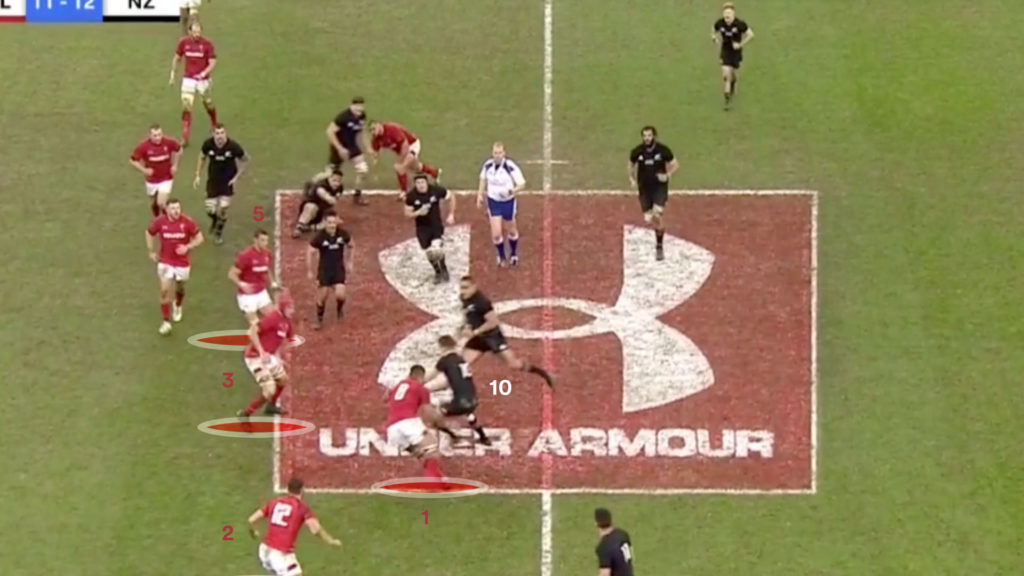 Barrett shapes to pass to his inside support option and extends the ball out in two hands to see what the inside defender will do.

Once the inside defender seems interested enough, he releases the pass forcing the third man to make the tackle. 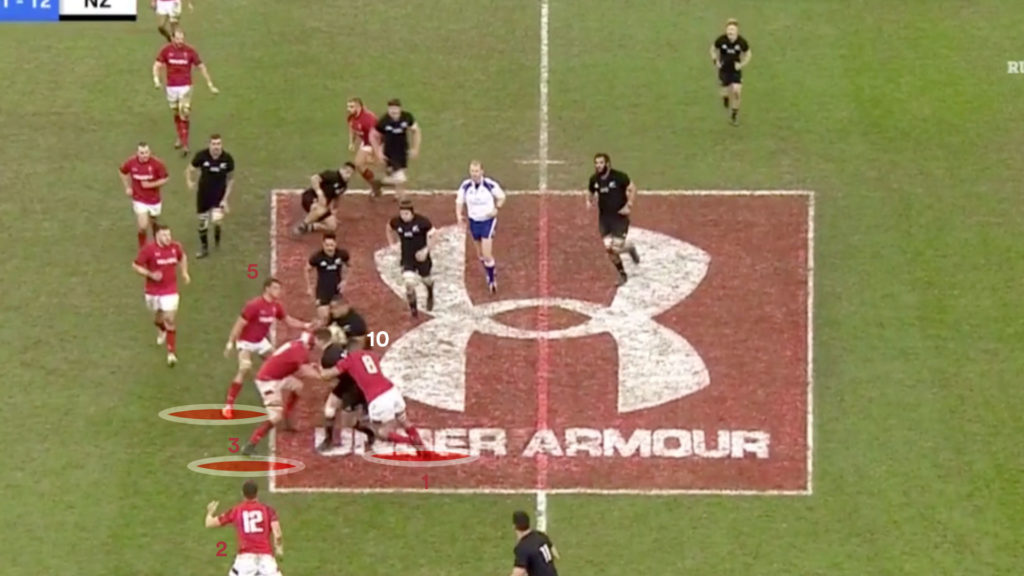 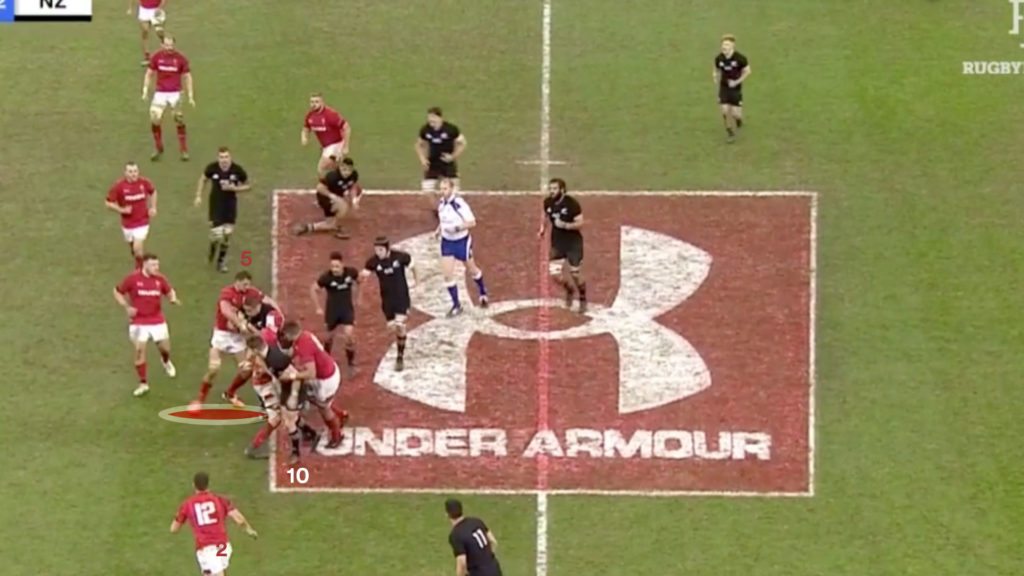 The Welsh player (5) who eventually made the tackle on the play started the phase folding around the ruck.

Consider what could happen if that player is tired, not working hard, or momentarily switches off. 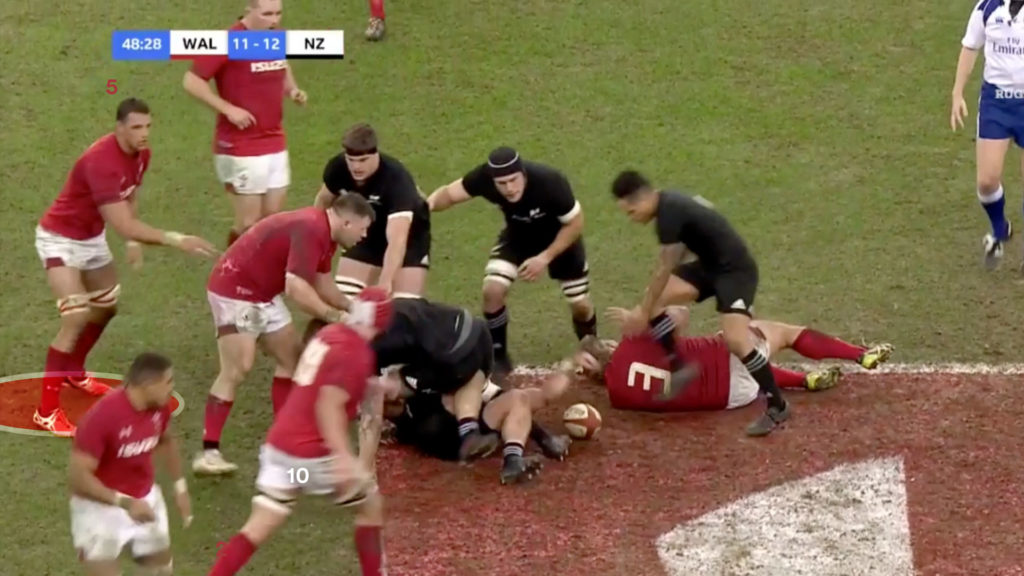 Barrett’s influence factor extends so far across the defensive line that every time he touches the ball, upwards of five players in the immediate vicinity needs to be fully aware of what is going on.

When there is a favourable mismatch with a tight five forward, the opportunity to take the line on is too enticing as the first man can be beaten quite easily, starting a ‘black hole’ which sucks in players and opens up gaps.

Just one of the surrounding players switching off or taking a break could result in a line break for the opposition.

When you add in an attacking kicking game, you can include the wingers and the fullbacks that need to have awareness for a total influence factor of seven players or nearly half the team.

However, what looks rather simple from Barrett is not. Agility with ball-in-hand is not the same as agility without it.

In the example against Wales, he used footwork to cut back inside off the left foot while simultaneously keeping the passing option open with the ball in two hands, processing the movements of multiple defenders before picking the optimal time to release the pass.

It’s a combination of instinctual movement with his feet, reading visual cues like body language, the anticipation of what those cues mean and then bringing it together with the ball skills and decision-making around the pass.

Many players who possess great feet don’t possess the ability to anticipate the passing option at the same time and ‘tuck’ the ball away which prevents a pass from being made.

Another All Black that will feature at 10 in the future, Damian McKenzie, has this type of playmaking ability in spades. Against England last year, the fullback-come-first five plays first receiver with no imminent space available.

In the space of two seconds, he will open up England’s defence and take the opportunity to put a supporting player away. 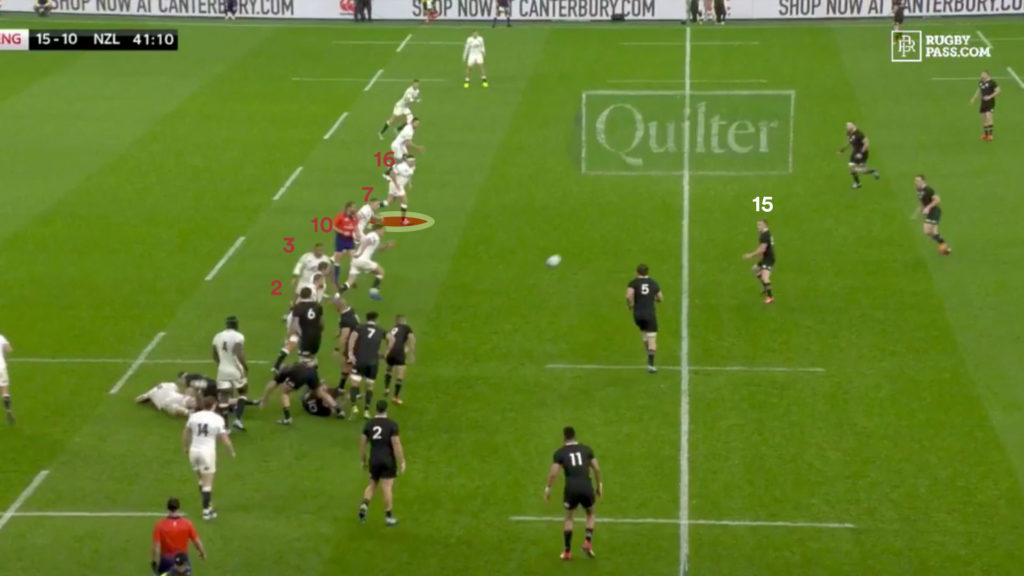 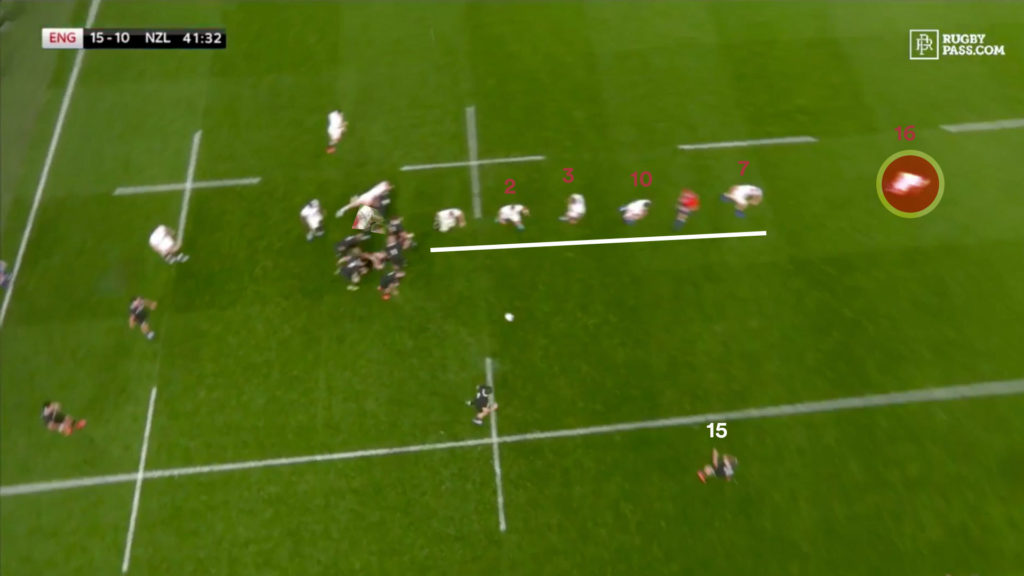 While the ball travels through the air, there isn’t any signs of weakness in the defensive line, but by the time McKenzie catches it, a disconnect has formed between Kyle Sinckler (3) and Owen Farrell (10).

Farrell pushed hard off the line while Sinckler wasn’t set to come forward when the halfback’s pass was released. 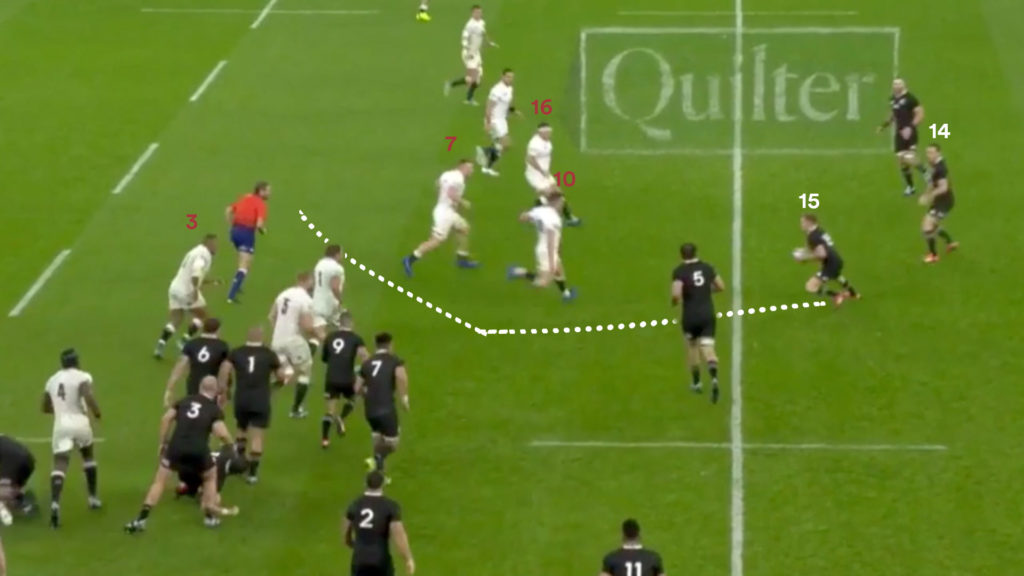 McKenzie’s instincts take over and he has the wherewithal to make a sharp cut off the right foot to attack the space. He beats Farrell ends up, forcing Sinckler and Underhill to cover his miss.

Although he will force these two other defenders to make the tackle, it will actually be Jamie George (16) that ends up paying the price for Farrell’s miss, highlighting the extent of McKenzie’s influence. 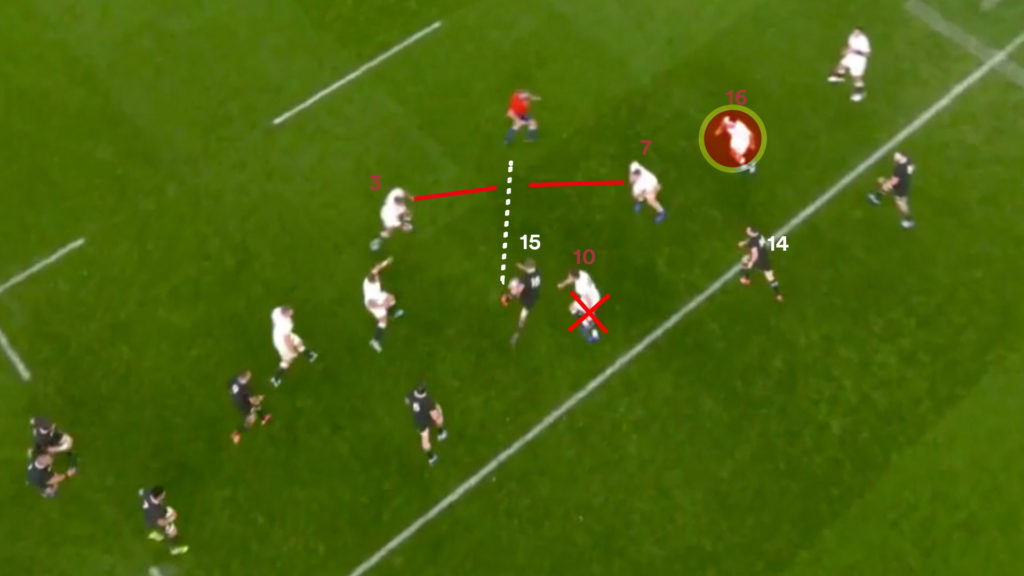 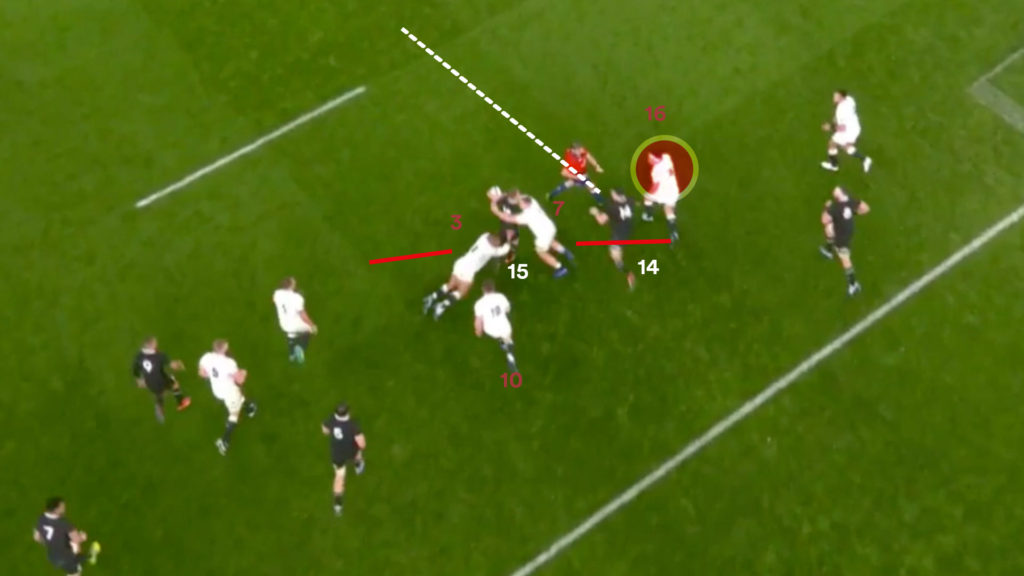 His ability to get the ball away in the tackle catches out Jamie George (16) who can’t cover Ben Smith (14), a faster player that has ‘won’ the race to the space next to Underhill. 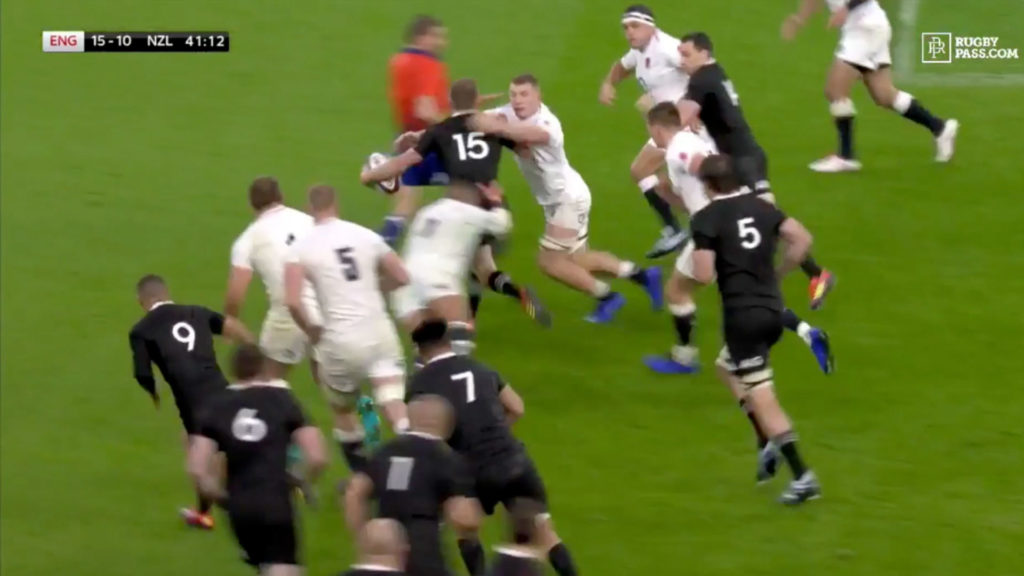 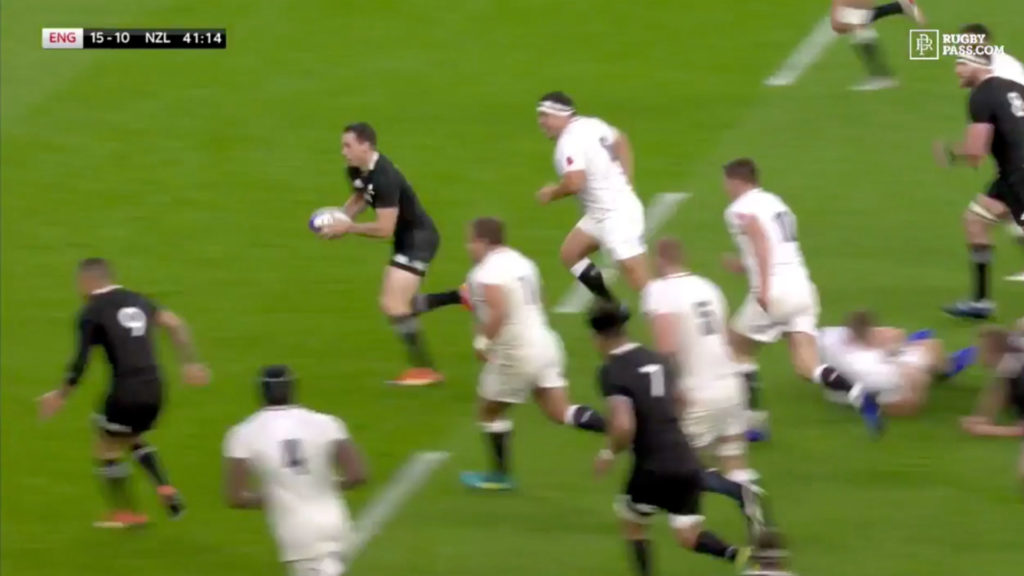 From absolutely nothing, McKenzie created something. A combination of vision, athletic ability, and skills created a line break with space that was never there.

It is artistry that cannot be scripted or pre-planned, but mastery of all the skills provides control and reduces the risk.

When you have multiple players that have these abilities, the opportunities compound.

If the team creates line breaks via other methods, simply getting the ball into these players’ hands with a fractured or thin defence on the next phase is a high priority.

There are many other flyhalves that get to this level but some systems don’t prioritise this kind of flyhalf.

Where McKenzie and Barrett have influence factors that reach as high as 6 or 7 when in top form, Australia continues to go after 10’s that have lower influence factors in favour of ‘steady’ hands, players with ability in some of the areas but not all three – but this ultimately hamstrings their attacking play. It is part of a systemic problem why the Wallabies’ haven’t produced a new 10 in over a decade and many of their projects end up at 12.

Quade Cooper is the purest Wallaby 10 there has been but didn’t get to maximize his career at the international level and his talent will go down as a waste by Rugby Australia. His best form came when the coaching staff seemed to work with his talents instead of trying to manage it.

Scotland’s Finn Russell has purple patches reaching this high level of flyhalf play but has inconsistencies. Owen Farrell and George Ford have shown this ability but conform to the national style of play in England, which has also been successful, it must be said. Joey Carbery in Ireland has all the gifts required to become this type of player. While Sexton has the ball-playing nous his running game will continue to decline in potency with his age.

South African play is 9-dominant but if Curwin Bosch was in New Zealand he would be earmarked to be brought through to the All Blacks by now.

There are many other quality playmakers but only in New Zealand are they so prioritized and sought after at the flyhalf position. Game managers don’t become All Black 10’s, they must be ‘game changers’.