RUGBYPASS+ The foundation of the All Blacks' defence is breaking down

By Nick Bishop
The foundation of the All Blacks' defence is breaking down
By
Nick Bishop
9 months ago
InternationalCrusadersNew Zealand
2:18pm, 08 April 2022 Go to comments

Most successful test teams tend to be based around a strong core club or provincial side. In recent times, past or present, Saracens have provided the core group of players for Eddie Jones’ England, while France depend heavily on the renewed club success of Stade Toulousain in the Top 14 and Europe.

The Leinster province regularly supplied 11 or 12 starters to the Ireland team in the Six Nations, along with many a coaching system overlap. Having a healthy proportion of players from one club enables a coach to take some shortcuts in cohesion, and implement a playing style that the majority of the players already understand.

Likewise, a shift away from that foundation causes teething problems, as Eddie Jones discovered in the Six Nations. There were only four Saracens in his initial 36-man squad for the tournament, and only three started for men in white in their two key clashes against Ireland and France in the final rounds.

The Vunipola brothers and Owen Farrell were just the most conspicuous of the absentees. England’s cohesion took a noticeable hit, and it is taking time for the red rose to establish an identifiable new style of play. Once the mould is broken, things take time to repair and regenerate.

In New Zealand, the bedrock of the All Blacks has always been the Crusaders, based on the Canterbury province and its satellites. Crusader squads usually read like a roll-call of All Blacks: Joe Moody, Wyatt Crockett, Owen Franks and Codie Taylor up front; Sam Whitelock and his brothers; Kieran Read, Matt Todd and Scott Barrett. In the backs, men like Ryan Crotty, Richie Mo’unga, Jack Goodhue and Israel Dagg. These are just some of the names who have glued recent national squads together and provided their backbone.

Ex-Wales international wing Mark Jones, who undertook a stint as defensive coach with the Crusaders in 2020, understood the cohesion and alignment he was seeing:

“At the Crusaders and in the Canterbury region, everything seemed so aligned. I’m sure there may have been politics going on in the background, but everything is linked and consistent.

“The teams are coached in a similar way, the teams play in a similar way, and as a result the players think alike. When they come together, they gel really easily, whether as Canterbury, the Crusaders, or as the All Blacks.

“The fundamental underpinning is that alignment.”

Jones went further, talking about individuals within the system and providing insight into the mentality of a great All Black Crusader, Sam Whitelock:

“He was 31 at the time, he had been an All Black for years, and yet he was keen to use me to help him become a better rugby player. That sums up the psyche of the Crusaders and the All Blacks. It doesn’t matter if you have one cap or 100 caps, they are obsessed with getting better.

It is very hard to implement a realistic rush defence with only 11 or 12 men in the defensive line. The line spacings are wider and players tend to start functioning more as individuals rather than as a unit.

“He challenged me and said: ‘I want to get better at one-on-one tackling with outside backs.’”

Although the current generation are still sitting pretty near the top of Super Rugby Pacific with five wins out of six matches, questions about the Crusaders’ ability to innovate, drive standards and create that sense of the alignment in the All Blacks are becoming louder and more urgent.

RugbyPass’ own Ben Smith recently highlighted some of the issues New Zealand teams have in implementing a coherent rush defence. Back in November 2021 I wrote a piece illustrating the reluctance of the All Blacks to commit extra defenders to the line even when Ireland’s intention to keep ball in hand became obvious in their end of year tour game in Dublin.

It is very hard to implement a realistic rush defence with only 11 or 12 men in the defensive line. The line spacings are wider and players tend to start functioning more as individuals rather than as a unit.

Let’s look at some examples of how the Crusaders have defended the width of the field in two of their more difficult Super Rugby Pacific matches in 2022 – versus the Chiefs in round four (a game they lost 21-24 on the final play of the game), and against the Highlanders in round seven (where they snuck home by 17 points to 14).

Here is the Chiefs’ first try of their match:

After a bobbled pass goes to ground there is nothing obviously ‘on’ for the men from the Waikato, but the fragmentation of purpose among the last three Crusaders defenders creates an opportunity to score out of nothing: Number 11 Leicester Fainga’anuku fires out of the line onto the loose ball, number 13 Braydon Ennor folds in behind him in the modern style, while fullback Will Jordan turns out onto the final attacker.

But Fainga’anuku fails to block the pass in contact by Sam Cane, Ennor cannot drag down Emoni Narawa, and Jordan has to perform a complete 360 in order to bring down the Chiefs fullback at last gasp – all of which lets Shaun Stevenson loose to score a try in the corner.

There is one player shooting out, and two players effectively in drift, moving laterally across the field. A Northern Hemisphere defensive maestro like Shaun Edwards would be tearing his hair out at the lack of common purpose.

Now compare with this sequence just before the half-time break:

Look at the actions of Crusaders’ second row Quinten Strange:

He steps half-heartedly upfield, then turns back inside and fails to block a pass, and finally ends up in a steep ‘jockey’ drift to the far touch-line in the company of No 10 Richie Mo’unga and No 7 Tom Christie. There is a strong sense that he is only comfortable in the last part of that movement.

Sevu Reece is one of the liveliest outside defenders in New Zealand, but even he gets caught in a no man’s land between rush and drift on the Chiefs’ second comeback try: 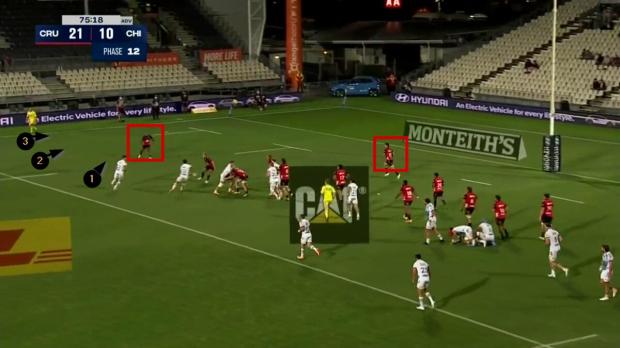 Reece has to make a decision to jam in and shut down the three-to-one overlap man-and-ball, with Will Jordan only just beyond the far post and still striving to make up ground from fullback.

The fragmentation of purpose also extended to the two centres in the match against the Highlanders:

The first example comes from a simple kick return into midfield by the Marino Mikaele-Tu’u. David Havili jumps straight out onto the big Highlanders number 8, but his centre partner is positioned wide and already looking to drift on to the possibility of an attack in the 15m channel.

The second instance is even more clear, with Havili shooting up into no man’s land and taking himself out of the game. He is about five metres ahead of everyone else in the Crusaders’ defence when Scott Gregory moves through easily to score.

Now let’s compare that to more complex instances where the Crusaders D jumps from ordinary to excellent in the space of the same phase:

The first part of the picture follows the same pattern, more or less, that we have seen already. Braydon Ennor bites in, Sevu Reece stays out and that creates the space for the initial line-break by Anton Lienert-Brown. But once the tackle is made further downfield, all of Tom Christie, David Havili and Reece are primed and ready to attack the ruck and win the turnover: The truth is that most players in New Zealand are still more comfortable doing what they have always done: scanning the last attacker, drifting out towards the extra insurance of touch, giving up the yards while waiting for the chance to attack a ruck in the wide channels and win a turnover.

The Crusaders’ D, once the line is broken, is truly outstanding. On four separate occasions after a Highlanders linebreak in the second period, the ball-carrier found himself isolated and outnumbered by no less than six players scrambling back in red and black: In both games, this led to a steady stream of turnovers on the very next play after the initial breach had been made:

Old habits die hard, and New Zealand is finding the adjustment to an aggressive, fully-committed defence at the line problematic. The attitude of the last defender, and the number of players left in the backfield created issues against Ireland in November 2021, and on current evidence, the traditional powerhouse of Kiwi Super Rugby is no closer to resolving the issues in Super Rugby Pacific 2022.

Over recent seasons, the Crusaders have provided the solid foundations for the national team, but there are mixed messages on the defensive side of the ball. While the scramble defence and effort after the break is superb, the trust and understanding of structure at the line is variable, to put it politely. The question of whether New Zealand can unearth the systems to accommodate some outstandingly skilled individuals is still very much in play as the 2023 World Cup looms on the horizon.