RUGBYPASS+ Why defending was easier for Ireland than the All Blacks

By Nick Bishop
Why defending was easier for Ireland than the All Blacks
By
Nick Bishop
1 year ago
InternationalIrelandNew Zealand
1:09pm, 18 November 2021 7 Comments

“This is the new direction of the Oakland A’s. We are card counters at the blackjack table and we are going to turn the odds on the Casino.”

So says Billy Beane, general manager of the Oakland Athletics Baseball team in the movie Moneyball, as he and his scouting team scour the free-agent market for available talent.

Card-counting is a method used by able mathematicians to predict the fall-out of cards on the blackjack table, and shift the odds of success in the hand in their favour.

The rugby equivalent would be counting the number of players in the front line, and in the backfield on defence, in order to determine the best attacking play and increase the chances of success on the following phase. On that basis, Ireland did a much better job of counting the numbers than the All Blacks in last weekend’s rousing encounter at the Aviva Stadium in Dublin.

The comments of the New Zealand head coach Ian Foster afterwards appeared to give out mixed messages:

“I thought we did well with our defence, hanging in there and frustrating them, and the fact we took our first two opportunities to score in a clinical way meant we were in the game and in quite a nice position.

“I was delighted that under sheer weight of possession and territory our defence stood up pretty strongly. We conceded one try when we had a yellow card, but we got to half-time a bit battered, but in a reasonably good position.

“We weren’t very clinical in that first 10 minutes [after half-time]. We presented a couple of opportunities they were good enough to take, and then it was a matter of chasing the game. I thought Will’s was a great try; I thought Akira’s was a great try – but the TMO didn’t, and that’s probably the story of the game.”

“It [phase play] probably took more of a toll on them. In the last 15 minutes there were a lot of stoppages, a lot of cramping, and a deliberate slowing the game down which was a bit frustrating. It sucked a lot of juice out of them as well. I don’t think energy or tackles was a difference in the game – it was the ability to take your opportunities when they presented.

Most coaches operate on the understanding that more time spent in possession of the ball tends to exhaust the defence more than the offence and takes its toll in the second period.

“Ireland like to retain ball and put your system under pressure, and we saw that again tonight. They were a little wider in some of their phase stuff and also on counter-attack there seems more ambition.

“That was a very good performance – the best I’ve come up against in my time. I thought they were pretty polished.”

On the one hand, there is an evident admiration for Ireland’s ability to keep the ball and use it constructively for long periods of the game; on the other, a sense that the All Blacks were somehow on top during those long defensive sequences, gaining in strength without the ball while Ireland’s ebbed away in possession of it.

In the cold light of day, the raw stats do not agree with that assessment. Ireland built 125 rucks in the game to 52 by New Zealand, and 77 per cent of those were on the advantage-line or beyond it, compared to 69 per cent by the All Blacks. They won more lightning-quick ball (60 per cent to 55%) and retained the pill better (95 per cent retention rate, as against 92 per cent).

The comments of New Zealand’s head coach in the aftermath do make you wonder whether he really sees a problem. Most coaches operate on the understanding that more time spent in possession of the ball tends to exhaust the defence more than the offence and takes its toll in the second period.

Ireland won the second half by 24 points to 10 after being five points adrift at half-time. With 22 bits of possession in the second period, the All Blacks scored one try but committed 12 turnovers or unforced errors. They only moved beyond three phases of play twice. So, who is kidding who?

The scene for the game was really set by two highly contrasting attitudes towards defence. Where the All Blacks like to keep defenders in the backfield in order to make the most of turnovers or ball kicked away to them, Ireland prefer to pressure the ball at the source with more men in the line.

The New Zealand approach became clear during Ireland’s very possession of the game: The two Barrett brothers are out of shot in the right half of the backfield, Sevu Reece has dropped back on the left, and halfback TJ Perenara is covering in behind the line, ready to either attack the ball at the ruck or join a counter-attack if the ball is kicked away. That leaves 11 players in the front line to cover the full 70-metre width of the pitch.

Ireland did their counting accurately, and kept the ball for the next minute and five seconds, working their way through 10 phases and 22 passes all the way up to the New Zealand 22, while the All Blacks stubbornly refused to add any more numbers to the front line of defence: As play moves towards Ireland’s left, there is ample space for the men in green to play into a big gap presenting between centre Rieko Ioane and wing Will Jordan – and a similar space was available on the following phase between Anton Lienert-Brown and Reece on the other side:

Although the sequence concluded with a breakdown penalty to New Zealand, the picture which Ireland created by the end was exactly what they would have visualized in their preparation as close to the ideal: There are still three defenders in the backfield and Perenara is still playing in the boot-space behind the line, while the 11 remaining defenders will be sorely pressed to protect the acres of green grass around them.

It became a very familiar picture throughout the first half: 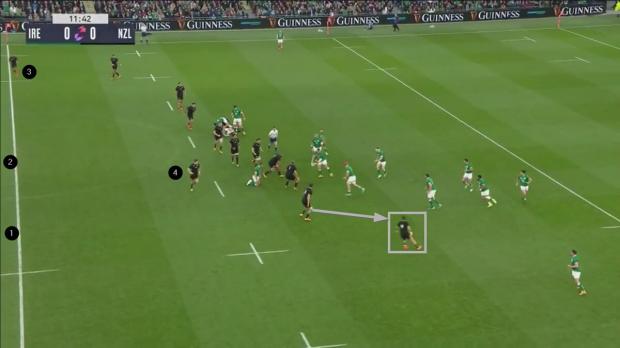 This represents an ‘easy yardage’ situation for Ireland, in which they can keep the ball comfortably without having to take any real risks with ball in hand. There were just too many inviting spaces for the home team to play through and around, building pressure and sucking the juice out of the defence, not the attack: By way of contrast, Ireland tended to commit an extra body or two to the front line, especially as the defensive elbow room contracted around their own 22: Jamison Gibson-Park is the only defender deep in the backfield and wing Andrew Conway is ready to join the line, so instead of defending 6.4 metres per man each Ireland player only has to patrol 5 metres of width, allowing them to close up and block the kick through at the line.

Those one or two extra bodies also tend to create more possibilities to make a double tackle and overwhelm the cleanout: The Ireland wings play much higher upfield than their Kiwi counterparts and the halfback is in line, not behind the ruck. The extra numbers mean there is much greater potential for overmatching ball-carriers on the line and at the point of contact.

New Zealand supporters will need some convincing that the head coach of the All Blacks has the right remedies to the ailments evident in their third loss in the last five games against Ireland. If Ian Foster truly believes that Ireland tired more from their glut of possession than the All Blacks did from making more than 200 tackles in the game, there are some underlying issues indeed.

‘Fozzy’ and his support staff challenged the men in green to keep the ball and use it effectively, and Ireland not only picked up the gauntlet, they used it as a fist to belabour their opponents. They counted all of the cards on the table and knew they could play to width and exploit the bigger line spacings, without taking undue risk. There are some serious questions to answer as New Zealand move on to Paris for a climactic finish to their end of year tour against France.