RUGBYPASS+ Is the Ireland rugby economy in a boom?

By Nick Bishop
Is the Ireland rugby economy in a boom?
By
Nick Bishop
11 months ago
LeinsterMunsterUlster
5:51am, 28 January 2022 2 Comments

It is a good time to be a professional rugby player in Ireland. The national side is coming into the Six Nations on the back of a convincing 29-20 victory over perennial world number one New Zealand in November, and all four Irish provinces have just qualified for the knockout stages of the European Champions Cup.

Those provinces have scored a grand total of 73 tries in only 15 games at an average of almost five tries per game. In the process, they have beaten English opponents six times in eight attempts, with Munster doing the ‘double’ over Wasps, Ulster twice overcoming the Northampton Saints, and Leinster putting over a century of points on Bath over their two matches.

Ireland’s so-called ‘fourth province’ Connacht went down narrowly to Leicester, the leaders of the English Premiership, by a combined score of 51-58. It was a narrow squeak on both occasions, with Connacht leading at the hour mark only to be overhauled by strong Leicester surges in the final quarter.

Tigers coach Steve Borthwick was full of admiration for the opposition after the dramatic last-gasp win by his side at the Sports Ground in Galway in the second game:

“They are an incredibly smart team and I’m always reticent to pick out individuals but Jack Carty, he was incredible. He is a fantastic player and the way he manages a team is just brilliant. It is always difficult against Connacht because they can play in different ways. A couple of weeks ago they won via a maul try against Munster; their maul was strong again today; their kicking game was good and when they opened up, their phase attack was strong. Their strategy is obviously well thought out.

“The relative merits of the competitions [the English Premiership and URC] aren’t anything I’ve dealt with; I’m not really concerned about it…

“What I will say is that this Connacht team is superb. We have had two good games against them: What? Seven points separating us over 160 minutes? That shows you have two teams who really went hard and credit must go to both sides…

“Connacht brought some immense pressure onto us. We conceded too many penalties but the reason we did so is because of the pressure they put on us. Yes, there were ones we should not have given away but credit to Connacht. From our point of view, this was a great experience for us.

“Coming and playing rugby here is brilliant. It’s a unique place and I must give a special mention to the supporters, they were incredible.”

Borthwick’s notably honest and generous summation does support the facts, and it implies a very different view of the relative strength of Irish teams from the URC and sides from the English Premiership.

The key to economy in the Emerald Isle is that all four provinces are branches of the IRFU, which grants the home union the power to manage the wage structure of the players throughout the country. The provinces do not compete with one another for their services by offering higher salaries in any version of a bidding war.

The ultimate reason for Ireland’s success at professional level – a very lean, fat-free rugby economy – has become particularly evident in the post-Covid world. Ireland cannot afford any wastage. England has five times more registered senior male players than Ireland, but 33 per cent of the professional squads in the Premiership are still filled by imports who are not England-qualified, compared to only 6 per cent in Ireland.

The key to economy in the Emerald Isle is that all four provinces are branches of the IRFU, which grants the home union the power to manage the wage structure of the players throughout the country. The provinces do not compete with one another for their services by offering higher salaries in any version of a bidding war.

It is a far cry from life in England and France, where most of the clubs are owned by private limited companies with one or two majority shareholders, and many have changed hands a number of times since the advent of professionalism.

That means an open marketplace and higher salary levels which have to be funded at least in part, by the personal wealth of benefactors like Steve Lansdown at Bristol, Nigel Wray at Saracens and Derek Richardson at Wasps.

Top Ireland players like Johnny Sexton and Tadhg Furlong will earn roughly two-thirds of the salaries of their English equivalents like Maro Itoje and Owen Farrell, and closer to half of the money that might be available to their counterparts in France. Even the bonuses for an international win are considerably less – £7K in Ireland compared to £23K for England.

The pay-off is stability, and from stability comes the opportunity to build and develop more quickly, both on and off the field. As Steve Borthwick pointed out in his post-match comments, Connacht may not have as much access to the top talent in Ireland as the other three provinces, but they are smart and have evolved their ability to win games in a variety of ways: through the maul, via the kicking game and by means of their phase attack. That can only derive from a cohesive, solid foundation.

Another version of this instantaneous on-field intelligence occurred in the return game between Bath and Leinster. In the 46th minute of the match, the Bath right wing Gabe Hamer-Webb was yellow-carded for deliberately knocking down a pass, with Leinster threatening to score their sixth try of the game:

Given Leinster’s ability to create width in their attacking game, Bath should probably have replaced one of their forwards with an extra outside back. They chose to keep eight forwards on the pitch instead, and they paid a heavy and immediate price.

Leinster are known for their phase attack with ball in hand, but as soon as Johnny Sexton and co observed where the power-play weakness would be, they went to the boot and attacked through the air. There was no wastage of time or effort, with the first positive yield harvested only three minutes into Hamer-Webb’s sin-bin.

After the men in blue were awarded a penalty in the Bath 22 on the right, Sexton immediately about-faced and looked for the cross-kick to the opposite side of the field. In Hamer-Webb’s absence, this is the situation he discovered: The last Bath defender on the right is walking back towards his own posts, leaving Leinster left wing Jimmy O’Brien (“2”) in glorious isolation out on the far touch-line:

The clarity of Leinster’s thinking was obvious on the kick-off following the score:

Max Ojomoh has come on to replace his namesake Max Clark at number 13, but the right wing is still untenanted and Johnny Sexton finds another weapon in his kicking arsenal to exploit it: Both of the Bath front line and backfield defenders on the right are about 10 metres inside the 15m line, and there is still ample space for O’Brien beyond them. It was no surprise that the try was scored in that space one phase later: The area of weakness is basically the same, all the way down the field.

It was only after the second try by O’Brien during the 10-minute power-play period that Bath began to adjust, moving their scrum-half Ben Spencer over to fill the space vacated by Hamer-Webb. It gave Bath another body in the right area of the field, but it did not stop Leinster’s momentum or their ability to break the line: At least Spencer’s presence in Hamer-Webb’s spot forces a second kick by their opponents, although the home side still find themselves under intense pressure deep in their own 22 at the end of the play.

This was a theme even after Sexton left the field to be replaced by Ross Byrne in the dying embers of the power-play: 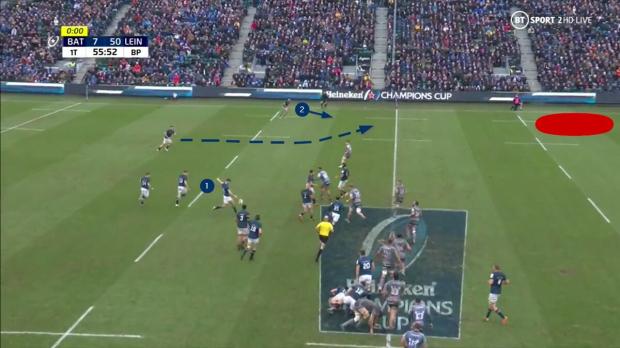 There is still a gaping hole on the right side of the Bath backfield, and Leinster right wing Jordan Larmour has sprinted all the way over to the ‘wrong’ side of the field to make the extra man and help create a turnover opportunity on chase.

The trouble the leaders of the Gallagher Premiership table had in putting away the fourth Irish province over two legs may have come as a rude awakening to those who blindly assumed the superiority of English clubs. Irish URC players do not have any in-built advantages in skill or physique, but they do enjoy the bonuses of the rugby economy in the country.

All the players operate within an agreed salary scale in a non-competitive transfer market, and the bulk of them tend to stay within Irish borders for their entire playing lifetimes. The proportion of foreign talent is still far less in Ireland than it is in England, and the imports are typically restricted to established international players or star names.

That stability grants the four Irish provinces a level of cohesion and understanding, and a speed of response to events on the field, which can go missing from the English counterparts. When Bath dropped to 14 men after a yellow card, their reaction to the absence of their right wing was slower than Leinster’s. Although Connacht were eventually overpowered by Leicester, their cohesion and ‘smarts’ left an indelible impression on the lively mind of Steve Borthwick, the Tigers head coach.

Will that cohesion translate to international level? Events at Twickenham on 12 March in this year’s Six Nations will tell the tale.