By Nick Bishop
Is England's Marcus Smith-Owen Farrell axis doomed to fail?
By
Nick Bishop
4 months ago
InternationalEngland
11:20am, 07 July 2022 Go to comments

Is Eddie Jones in a race against time to get the alliance of Marcus Smith and Owen Farrell firing, or is it simply the case that the two rugby natures are so far apart they they will struggle to ever form a partnership in the two key complementary play-making roles at number 10 and 12?

The truth is that Jones would like to fit both Farrell and Smith into the England team together, regardless. ‘Faz’ has been one of the most influential leaders in Northern Hemisphere rugby for as long as anyone can remember; Smith represents the new generation of talent in the English Premiership pipeline.

It is a coaching conundrum Jones has struggled with before, in his other long-term tenure as a national coach with Australia. The high watermark of reaching a World Cup final against England in 2003 was followed by a disastrous eight-match losing streak in 2005 which ushered him towards the exit door as Wallabies head coach.

The team which Jones inherited from World Cup winner Rod Macqueen never adequately transitioned to a new era of success, with a new generation of players. With England, Eddie’s record as a head coach stood at a spectacular 94 per cent in his first two seasons (2016-2017) with the team built by Stuart Lancaster. Since 2018, it has dropped to 58 per cent against the top eight rugby-playing nations (Ireland, France, Wales, Scotland, New Zealand, South Africa, Australia and Argentina). His record against Six Nations opponents (excluding Italy) over the past five seasons is barely 50 per cent, at 13 wins out of 25 matches.

The problem of connecting Smith and Farrell in the England midfield, therefore, rehearses the Gordian Knot in Eddie Jones’ own coaching career in quite concrete terms. Eddie both wants and needs the link to work.

Before the start of the 2022 Six Nations, the England head coach commented:

“You talk about Marcus Smith, Owen’s going to be an important player for Marcus. Marcus could be an absolutely brilliant 10 so he needs to have a 12 next to him that can run the game for him and that’s where Owen is so good.”

After the two had played only 68 minutes together against the Wallabies in the autumn, the dominant emotion connecting the two players was hope. As Smith himself put it:

“He [Farrell] is a massive competitor and wears his heart on his sleeve. More than that, he’s got brilliant vision and skills at the line.

“We trained together a couple of weeks ago and I really enjoyed it. I’ve loved learning off him and bouncing ideas off him.

“We complement each other nicely – we both see the game pretty similarly. I hope we can both come together and get the best out of each other.

“Hopefully, I can be there to get the best out of him and allow him to show his skills on the park. Hopefully, he can also allow me to show the best of me…

“Hopefully, we can put our competitive edge together to try and get a test series win [against Australia]. Both of us want to do that. We’ve spoken long and hard about it.”

From an England supporter’s point of view, that might be rather too much optimism, with too little factual support for comfort. The experiment will take time to evolve, but Eddie’s career in England might be burning on a short fuse if his charges lose the July series against his country of birth.

He has already committed to playing the pair again in the crucial second test at Brisbane, and pleaded for patience after the match at the Optus Stadium:

“It was a good start. They are one-and-a-half tests into it. I thought there were some opportunities we were not quite clinical enough to take, which they created. They’ll be very good together, but it takes time.”

Let’s take a look at some of the features of the combination to emerge from the first test.

At the very beginning of the game, it looked like the intention was to insert Farrell – nominally the number 12 – at first receiver during structured phase play:

This was England’s preferred pattern for much of the game. ‘Faz’ stands at first receiver (1), with Marcus ghosting in behind at second playmaker (2). The idea is to connect the Harlequins man with a big runner outside him (6-foot-5-inch fullback Freddie Steward at 3) with his centre partner, club-mate Joe Marchant pushed one spot further out towards the edge at 4: 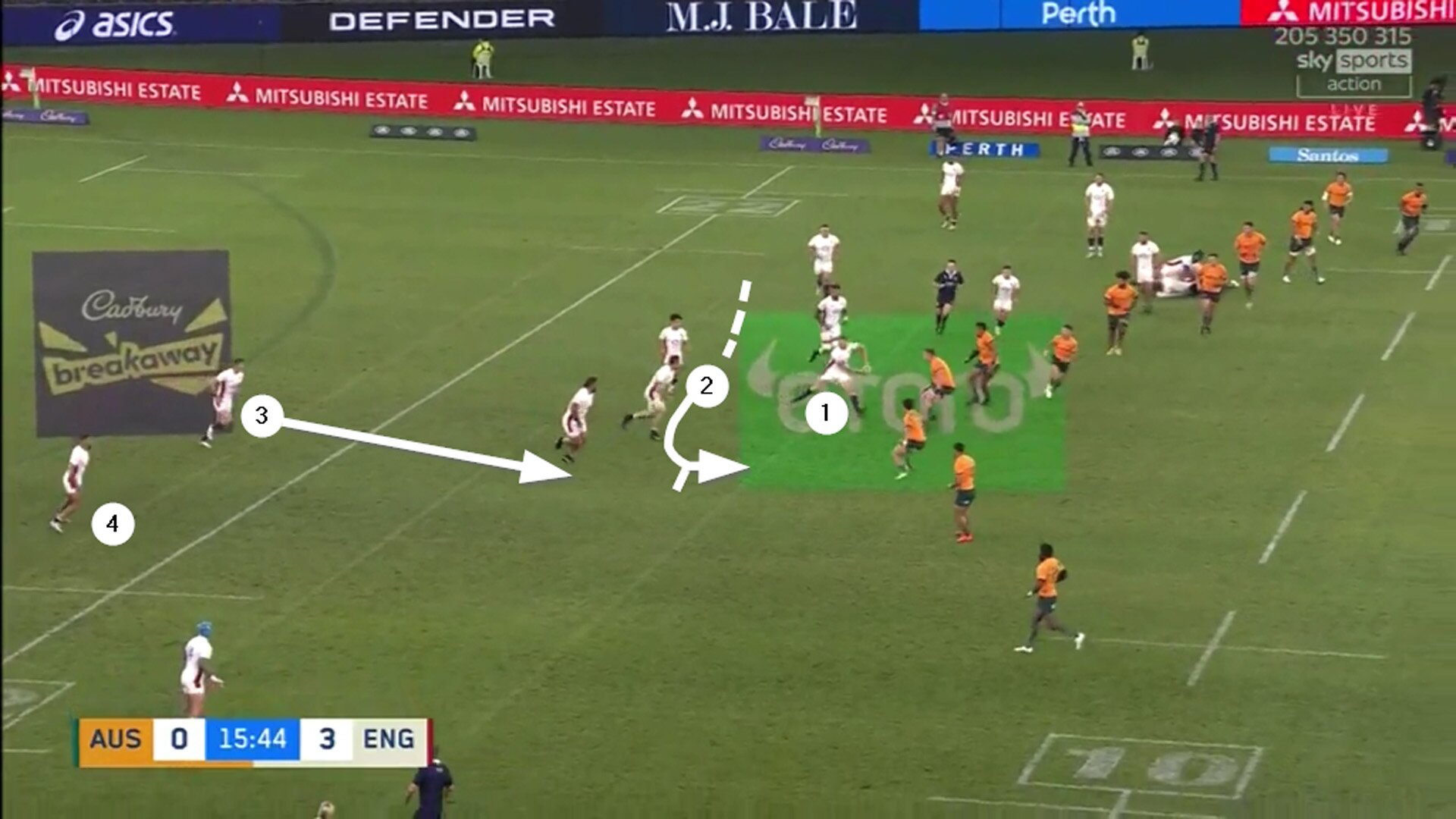 On other occasions, Marcus would look to connect with big men like Joe Cokanasiga out of the same structure:

After Smith gets the ball from Farrell, he has big Joe on his inside and another strong tackle breaker, Jack Nowell, on the outer, with Marchant again pushed out to the edge beyond them. Some poor handling scuppers the move and destroys all attacking momentum. The idea clearly makes some sense, because Smith is used to playing with one big man inside him (typically number 8 Alex Dombrandt) and another on the outer (number 12 Andre Esterhuizen) at his club Harlequins.

There were many more problems when Smith and Farrell stayed in their allotted roles, with Smith taking the ball at first receiver. There were some straightforward disconnects:

It is all rather too tentative as Marcus overcalls for the ball out of the first line from Billy Vunipola, and the pill drops between two stools. Smith was also vulnerable to turnover at the tackle when he took the ball to the line himself:

Wallabies hooker Dave Porecki is looking to dispossess Smith at both rucks. In the first instance, there is no Cokanasiga, Nowell or Steward coming off his shoulder, effectively isolating him as a runner. England received the penalty but they would have been hoping for much, much more so close to the Australian goal-line. In the second example, Steward has been marked out of the play on Smith’s outside shoulder, and on this occasion, Porecki completes his task successfully.

One of the big issues for England to resolve with Smith at first receiver and Farrell at second is the depth of the space between them: 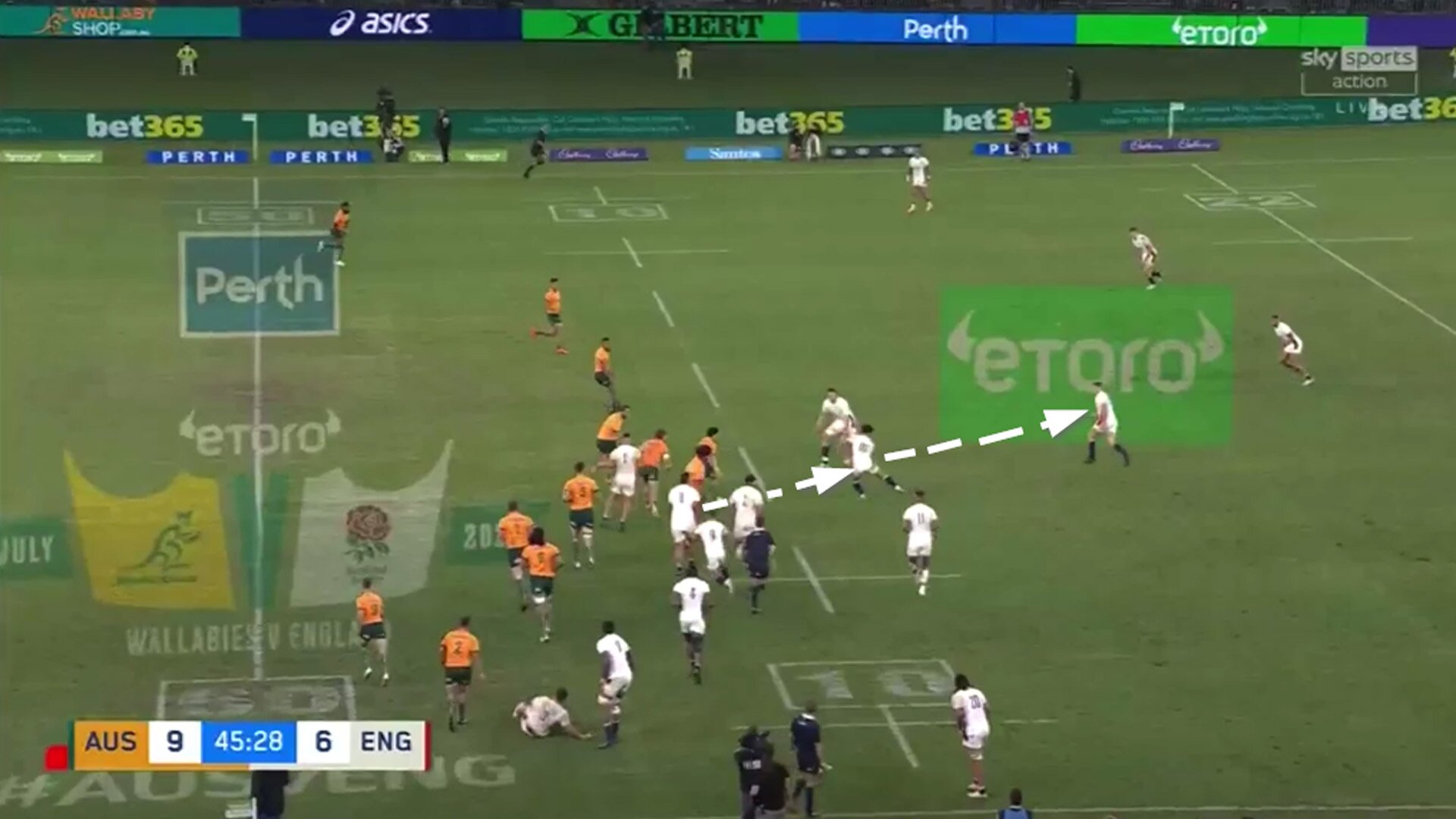 There are about three metres on the pull-back ball pass from Vunipola to Smith, which is bad enough. There are another five before the ball can reach Farrell at second receiver, which means that a kick is the only option on the play.

In the modern game, that kind of depth also denies width on attack rather than generating it:

By the time the long pass from Farrell reaches Lewis Ludlam on the left edge of the field, the Australian defence is well positioned and actually has a three-on-two of its own near the side-line.

Put it all together, and there was an uncomfortable mishmash of attacking ideas lacking the necessary unity of purpose. The following sequence starts with Smith picking out the wrong support player on an inviting short-side: 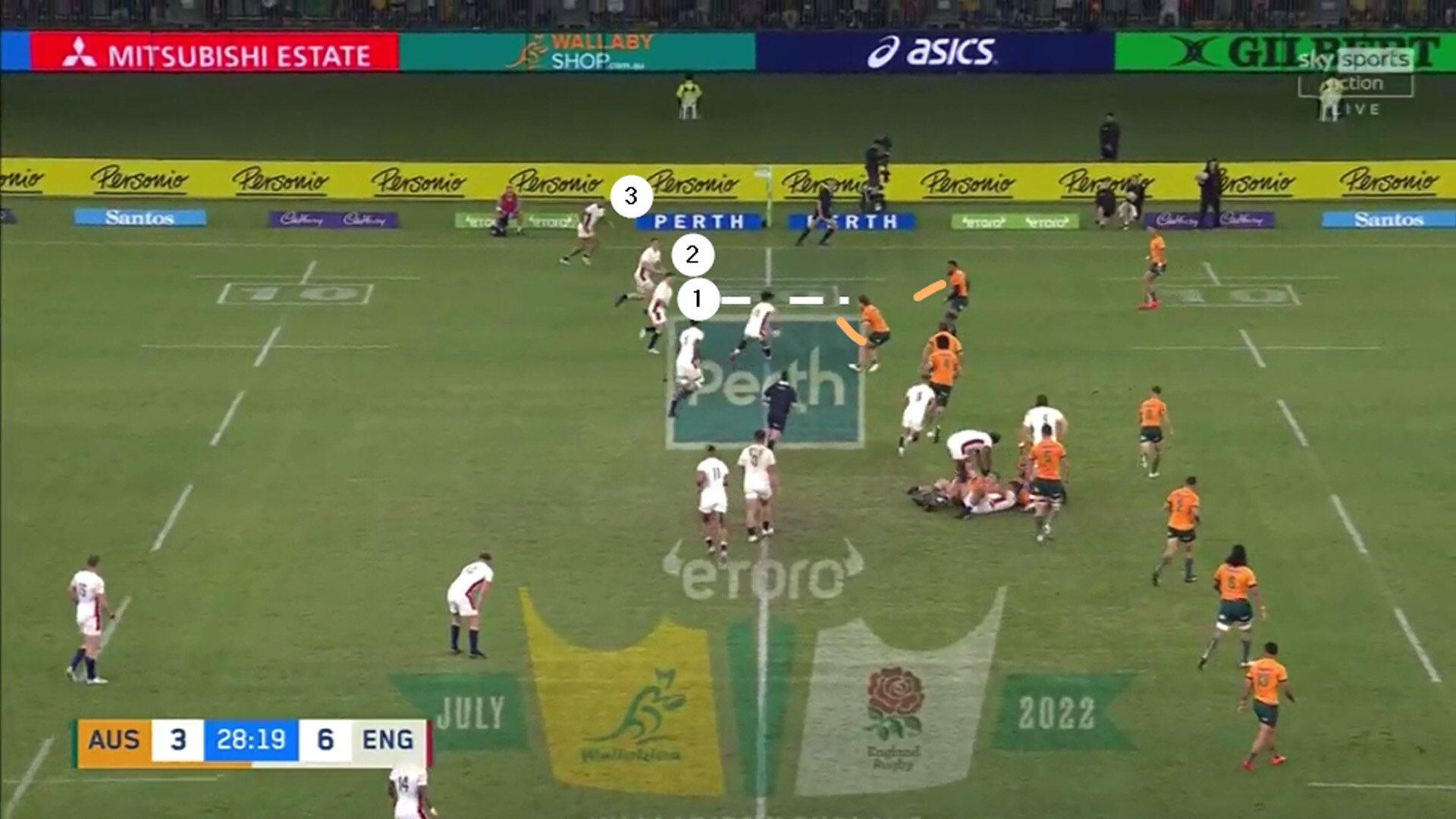 The sensible option would be to use Jamie George (1) on the short ball and force two Wallabies defenders (Michael Hooper and Samu Kerevi) to condense around the tackle, with the short-side still open on the following phase after a lightning-quick ruck delivery. Instead, the ball goes wider and there is a long delay in the recycle. 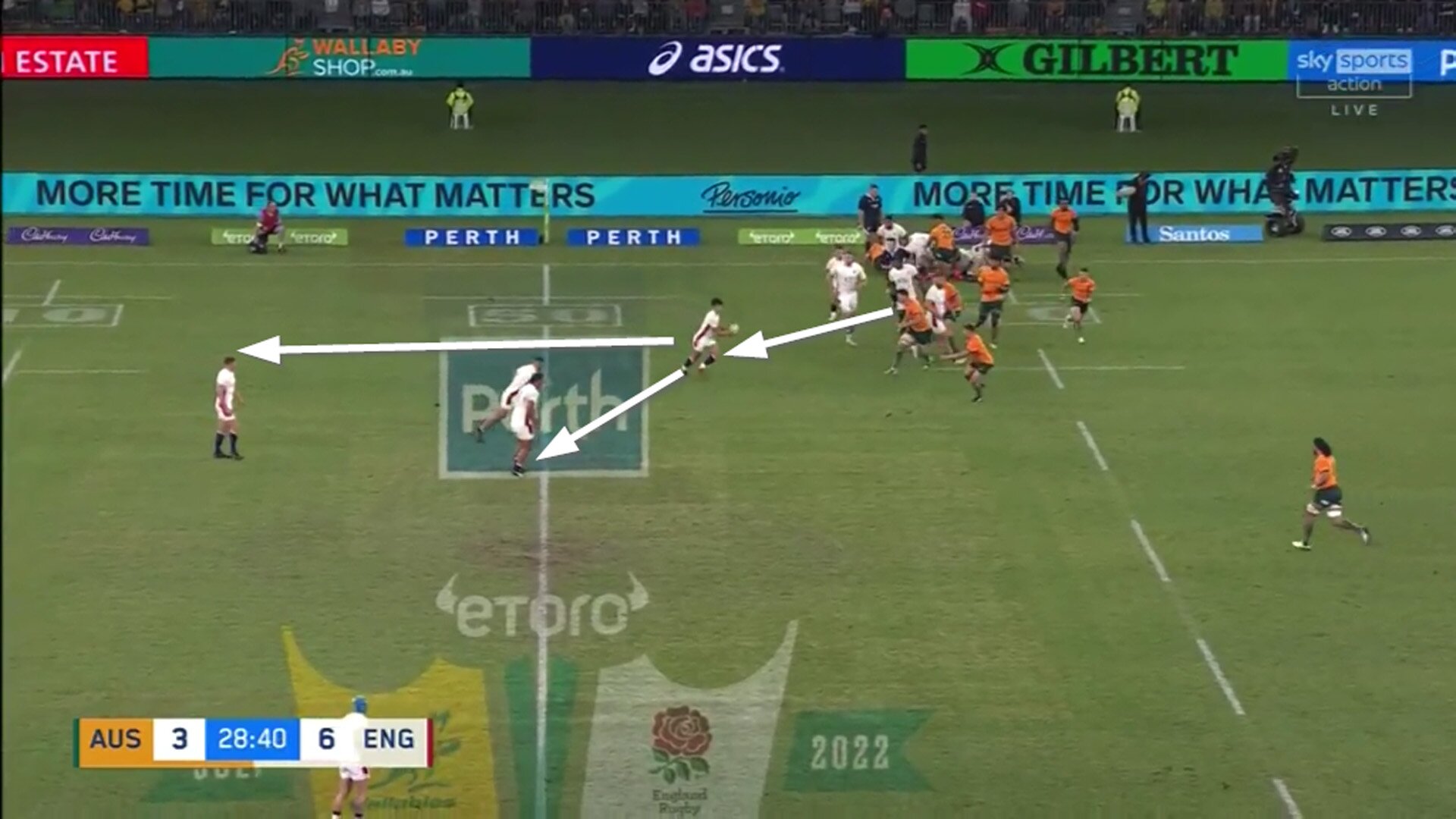 There is still far too much distance between the various components of the play – between Maro Itoje and Smith in the two lines of attack, between Smith and Ellis Genge outside him, and between Smith and Farrell ten metres behind him. That places England’s handling and passing skills under too much avoidable duress.

It also makes an error much more likely on the phase immediately following:

Owen Farrell overruns the pass from Smith, and that is the end of the attacking sequence. It was a symbolic moment in proceedings: Farrell cannot play the same role as Andre Esterhuizen does outside Smith for Quins. He ends up either playing too deep, or forcing the issue at the line.

Even when England scored a try involving passes from both numbers 10 and 12, it derived from individual brilliance rather than an opportunity created by the cohesion of the attack pattern:

Even after Henry Arundell receives the ball near the left sideline, the depth of Farrell’s positioning means that the Australian defence is in A1 shape. There are two tacklers directly ahead of Arundell (Noah Lolesio and Andrew Kellaway), and an insurance policy (James O’Connor) behind them. It’s only the young London Irishman’s prodigious strength in contact and quicksilver first step which makes all of the difference.

The jury is still very firmly out on the possibilities of the ‘new’ (Marcus Smith) and the ‘old’ (Owen Farrell) blending effectively in England’s midfield in time for the World Cup. It represents the final frontier England head coach Eddie Jones failed to conquer in his time with the Wallabies (2001-2005). Moreover, Eddie is burning on a short media fuse which could blow the combination to smithereens before 2023 ever arrives. If Eddie loses 3-0 in July, ‘Marcus and the Faz’, however nice the soundbite, will never become a sensation on the grandest of stages.