RUGBYPASS+ How can Eddie Jones get the best out of Tom Curry?

By Nick Bishop
How can Eddie Jones get the best out of Tom Curry?
By
Nick Bishop
1 year ago
InternationalEngland
11:20am, 18 January 2022 Go to comments

It is a crossroads moment for Eddie Jones as head coach of England. He has won three Six Nations titles in his six-year tenure, taken his charges to a World Cup final in 2019, and boasts the best winning percentage of any England coach – Sir Clive Woodward and all.

Despite that outstanding record, nagging doubts still remain about the best way forward for English rugby, and Eddie Jones’ ability to lead it down the right track.

The devil’s advocate shows Eddie’s greatest success achieved in the first couple of years after takeover: an all-conquering 14 wins out of 15 against the top-tier nations (Ireland, Wales, Scotland and France in the north; New Zealand, South Africa, Australia and Argentina down south), with a brace of Six Nations championship wins in 2016 and 2017; but only 19 wins out of 37 against the same opponents since 2018, with one Six Nations title in the following four years.

In the meantime, the Gallagher Premiership has developed into a vibrant, robust domestic competition, with a greater variety of playing styles emerging on the back of the vanishing spectre of relegation. A movement-based side (Harlequins) are the champions but a defence and kicking-oriented team (Leicester) tops the current table. You pay your money and you take your choice.

“Eddie knows there’s the England mindset around playing. He knows the menu required to win Test match rugby, which is set-piece, kicking game and pressure and discipline, and accumulating points.

“But at his heart, he wants to play rugby as well. So, if he’s got the base game, he still wants to be innovative and adventurous when he can.

“It might sound like a contradiction, but he likes to do it in a pragmatic, clinical way. And so, a [Marcus] Smith, who’s a bit more well-rounded, could be that sort of X-factor player within all of their systems that he says, ‘You just do what you do and we’ll just build around you’.”

It does sound like a contradiction indeed. In practical terms, it is no mean feat to change the character of a team so fundamentally, and it cannot be done by simply adding attacking flair to the existing defensive base like sprinkling chocolate curls on a cake. The change has to run a deeper course than that.

England only conceded one try in three games in the 2021 November series, and they kicked even more than the kick-masters South Africa in their individual encounter. Although Marcus Smith started the two key games versus the Springboks and the Wallabies, there is a developing logjam in the play-making positions with Smith, Henry Slade and a fully-fit Owen Farrell competing for just two starting spots.

Defensively he [Curry] is probably one of the best defensive backrowers in the world. His one-on-one tackling, his ability to get his head over the ball, and then – since he came into the squad in 2017, where he came in mainly as a defensive player – he has evolved his game to include some running skills, some passing skills and some linkage skills, more importantly.

The same jostling for position is also occurring in the back row, with Alex Dombrandt from the movement-based school competing with Alfie Barbeary or Billy Vunipola from the physical, hard knocks academy, and three high-quality open-sides available in the shape of Tom Curry, Sam Underhill and Lewis Ludlam.

Eddie’s solution at the back end of 2021 was to ignore big Billy and have Alex Dombrandt provide impact off the bench. He chose to select Underhill at number 7 and add spice by shifting Curry into number 8. This is how he explained his decision at the time:

“Firstly, defensively he [Curry] is probably one of the best defensive backrowers in the world. His one-on-one tackling, his ability to get his head over the ball, and then – since he came into the squad in 2017, where he came in mainly as a defensive player – he has evolved his game to include some running skills, some passing skills and some linkage skills, more importantly.

“With the back row we have got, initially with Courtney [Lawes], a pretty strong ball runner, and Underhill is strong over the ball and will give Tom a chance to mix his game between running and linking and his defensive work. He has got the ability to do that.

“There are two players in the world that are similar in that aspect – it is him and Ardie Savea – that are both outstanding natural sevens but have got the capacity to be outstanding eights because they have the ability to carry the ball, to link and still do the defensive work.

“We want to keep challenging him to be a better player, and playing number 8 is a different set of skills. You have got to read the game a lot more and playing eight will help him become an even better seven.”

It is clear that Eddie is trying to have his cake and eat it, chocolate curls and all. If he sticks with the same arrangement for the 2022 Six Nations, it may just be a case of slotting Lewis Ludlam from the Northampton Saints into Underhill’s role.

The selection of two opensides in the same back-row is primarily associated with an increase in defensive capacity. Wales achieved a Grand Slam at the 2019 Six Nations with Josh Navidi and Justin Tipuric playing in tandem, and they conceded an average of only 1.4 tries and 13 points per game along the way. In the climactic finale against Eddie’s England in Cardiff, the combination of Navidi and Tipuric proved to be too much for Tom Curry by himself, and Wales won 21-13.

Is Eddie’s judgement about Tom Curry’s future correct? Can he provide the same silky linking and offloading skills as a Justin Tipuric in the wide channels, or the same leg-drive and post-contact yardage as Ardie Savea in close? Let’s take a look at some recent examples.

There is no doubt about the effectiveness of the dual open-side combination in defence, and in pursuit of the high kick:

Having two natural number 7s on the field at the same time adds both width and speed to the chase. In the first instance, Harlequins’ wing Joe Marchant recovers the ball, and Curry is there to clean out over the top of him and confirm the turnover. In the second, Underhill forces the error and Tom Curry provides presence over the ball on the deck, just in case.

The bonus is the same on defensive plays when covering kicks to the corners of the field:

Jonny May misses the receipt but Curry is on hand to pick up the pieces and make a perfect ‘nail’ presentation at the breakdown.

The critical part of Eddie’s projected curve for Tom Curry is, however, his development as an attacker. Against South Africa, the formula worked well, and helped England use the width of the field more quickly: 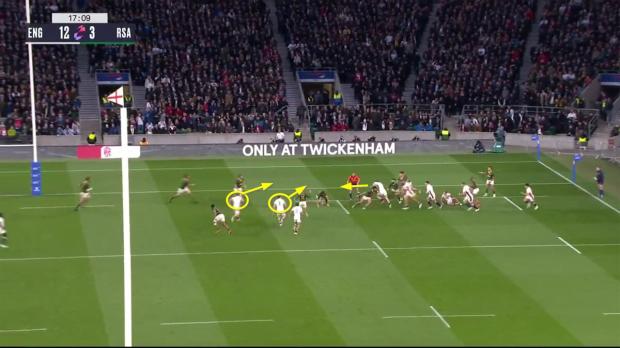 The ball is moved wide to Max Malins from a scrum, and Curry and Underhill are first to arrive at the ensuing ruck over Jonny May. Their decisive cleanout oiled the wheels for a simple try by Freddie Steward shortly afterwards.

Curry has also flashed the ability to function as the link player Eddie wants in the wide channels:

Sam Underhill cleans up the ball at the base, Curry is the link out to Steward and Malins on the right. He showed some footballing finesse in his choice of angles in a recent game between Sale and Bristol:

The subtlety of Curry’s contribution is not immediately obvious until you see the shot from behind the posts: Curry starts his run on an angle to hold both of the Bristol defenders in front and to his outside, and draw them further infield. When that objective is achieved, he breaks to the right to connect with his wide support and create the scenario for the score.

If Tom Curry sticks in the middle of the back row for England, he will see a lot of the ball in this kind of position: Curry is the front receiver, Marcus Smith is behind, and the number 8 will have to make a decision whether to run or connect with the backs. The issues will arise when he has to run:

Curry is crushed in the joint tackle by Duane Vermeulen and Lood de Jager and England are forced to give up a penalty at the breakdown. It is in these situations that Curry lacks the sheer power and size of a Billy Vunipola, or the leg-drive of an Ardie Savea after first contact is made.

There is also a question of whether the additional requirements on attack will overload, and dilute his effectiveness on the other side of the ball. Some strong hints from the autumn:

In the first instance, Australian number 8 Rob Valetini runs straight past Underhill and Curry on first phase and into Marcus Smith, and the England number 8 over-commits to a losing ruck. In the second, Siya Kolisi runs over the top of both Curry and Smith to make a break on first phase from lineout.

The team that Eddie Jones picks in 2022 will probably be expected to take England all the way through to the World Cup, and it is shaping up to be the most critical selection of his entire tenure. Key decisions have been necessary everywhere in the back row and midfield, and many of them were the ‘either/or’ kind which could not be fudged. It is time for Eddie Jones to add the spice, and decide just how much Curry should be added to the recipe.